A Winner is You!

For those wondering about the title, this might help. 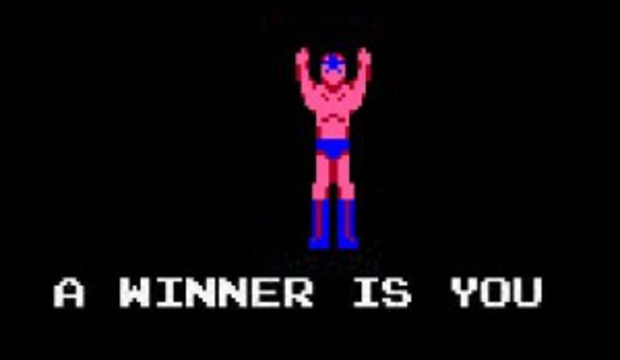 A Nintendo (old school NES) game simply called Pro Wrestling was a game I loved to play.  Pictured above is one of my favorite guys to compete as- Starman.  Anyways, when you would win this would be the screen.  A WINNER IS YOU!  From what I understand (or maybe just made up), the game was designed in Japan, and when it was created for America, they didn't put much effort into "America-izing" it so a poorly worded phrase was born.  I'm sure if you read my blogs, I have made some similar mistakes, including using a word such as "America-izing".

Anyways, this isn't about a generic wrestling game from the 80's, this is about winning.  Sorry, another meme is needed. 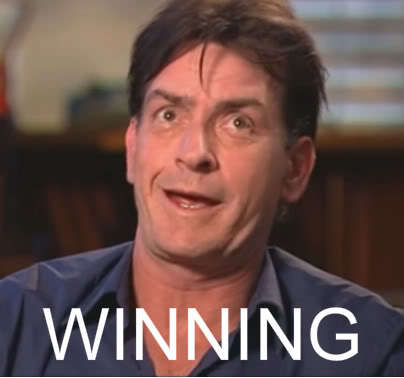 I'll start off with a couple Listia wins, then show you a contest I won on Twitter.

I won this a while back.  I have been a semi-collector of David Freese since I first heard of him, he has a similar last name as me, and so I joke around and say he is a relative of mine.  I might have had the card on the far right, but the other two I didn't.  I guess I should put him on my want list (same with Albert Pujols and a few others) so I can see what I have. 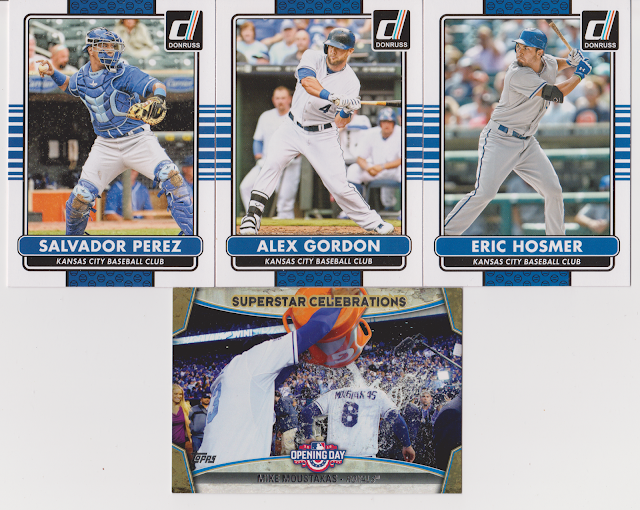 This was a bit of an impulsive bid.  I wasn't sure if I had these, but they were cheap so I bid on them.  If I do have them I have a place they can go, so no big deal.  It reminds me I really need to finish sorting my cards.  Maybe with it too hot/rainy I can finish that soon.

While working on the blog about the Ninja Turtles box, I was seeing what cards in Series One I needed, and found some on Listia.  These two I got really cheap and bid when they are really low bids.  I don't plan on finishing it for a while, but bit by bit helps.

The Harry Gant card is one I was really happy to get.  My family liked Harry Gant, and I liked him too.  My mom still has a Harry Gant hat somewhere.  While the design of the card is lacking, I like this card a lot because you can see his sponsor on him and the car.  Skoal was his longtime sponsor, but once they started prohibiting tobacco and alcohol (hard liquor at least) on cards because it targerted to kids, Skoal was erased from the cards.  It's nice to have one that still has it on there.


Okay, so I'm sure some of you have waited patiently to see what contest I won.  If you follow me on twitter, or maybe you even saw it on my blog on the twitter feed, here is what I won. 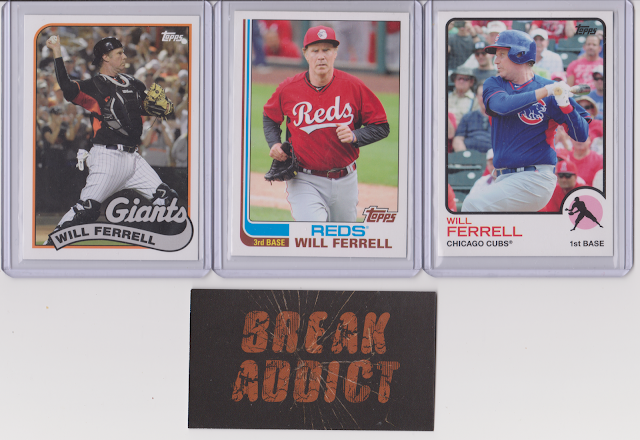 I haven't followed Break Addict for very long, but they have great giveaways.  This one was for as you can see, 3 Will Ferrell cards.  I don't try for every giveaway I see because some just don't interest me, but this one did.  I never planned to try to get any of the Ferrell cards.  To be honest I wasn't a fan of him playing in all those games in Spring Training.  However, I also like pop culture so at one point I would have liked to own a Will Ferrell card.  These three are nice.  I think my favorite overall is the Giants card.  I like the picture because he is wearing the catchers gear, and I like the '89 design more than the other two.  The Cubs card is a close second though.  The Reds car just looks off because of the jersey, I'm not a fan of that jersey design.

Now that I have a good portion of the cards though, I might try to track down the rest of them.  It would be a nice little subset to get once the prices subside a bit.

Thanks to Break Addict for the contest, and I can't wait to see what else they have coming up.

Before I go, I want to spread a message.  Be sure to check your messages on Twitter and Facebook.  Sometimes they don't show up and you might miss them.  I just checked mine on Facebook, and had two messages waiting for me from June 5th!  2 weeks ago!  One was that I won a FB caption contest from COMC and got a $5 credit.  I hope they will still honor it, and wish I saw it sooner as I could have got more cards (free shipping this past week and I just had a shipment sent, darn the luck).  The second message was from a blogger who had cards to give me.  I don't get Facebook sometimes, I really want to swear it off, but there are still people I communicate with on there that I can't just close my account (family and friends, which I still need to know about my high school reunion).  So, check your messages and emails too.

So that will wrap it up for today, thank you for reading, and have a great weekend.  Happy Father's Day to all the dad's out there, and to the Uncle's out there (like myself) kudos to you too.  If you don't fall into either category, well... CHEERS TO YOU AS WELL!  This isn't like Valentine's Day where folks should be left out, Happy Weekend to all, and to all a good night!