Take Two Packs and Call Me In The Morning

I only have one plugin near my air conditioner (yes, I don't have central air), and its the same one that I use for my desktop computer and scanner.  I just recently moved the computer there after I got a new desk because its a good spot.  So the trade-off is I either have air or have the scanner (since I mainly use a laptop, the desktop isn't really needed to be plugged in).  I mention all this because it was cool enough for a couple days that I was able to scan a few things.  Today I will show off a couple packs of cards I bought in the last month or so. 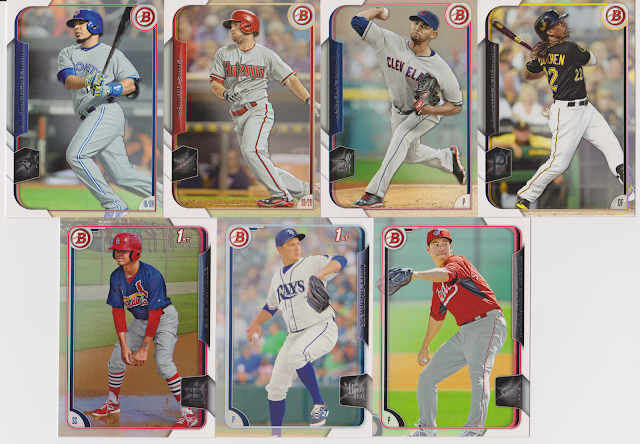 Let's start with some Bowman. I just love saying Edwin Encarnacion's name.  I don't follow him much, and don't collect him, but it gave me a chance to say his name so that's a win.  I'm glad I got the Andrew McCutchen card too.  It's still a tad early to say I started a PC of him, but its getting to appear I have.

Bottom row featuring a couple first Bowman cards.  A Cardinals guy I'll hold on to for a bit, but never really heard of.  I should keep up with the Springfield Cardinals a bit more but I don't.

I guess I can't say it was a bad pack.  I've heard od almost all of them.  Nice card of Severino in catchers gear.  Die-cuts don't place high on favorites but this one is not bad.  I think I get these packs sometimes just to say I heard of these guys before they hit the majors (though Anderson wouldn't fall in that category, but I have heard of him). 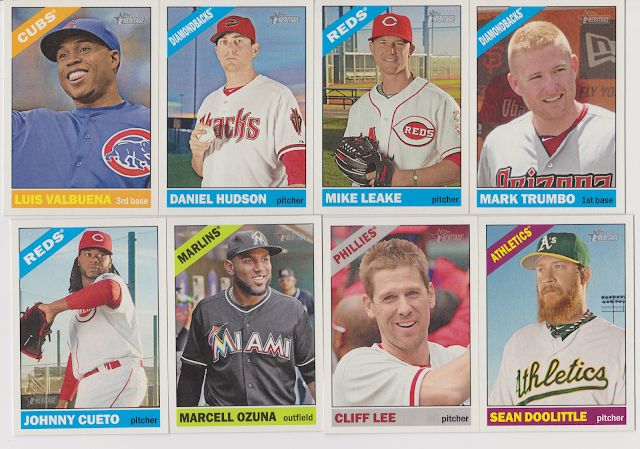 Not a bad start.  Cliff Lee and Johnny Cuerto are nice gets.  Cuerto has been in a lot of trade rumors lately and Kansas City has been mentioned.  I'm not sure if that would happen, but depending on what we'd have to give up, I'd be okay with it.

I cleaned up my "OTHER BASEBALL" binder a couple days ago which are guys not in my Royals collection, Mizzou, or my Cardinals or Red Sox binder (which I'm thinning out too).  In the binder was a ton of Mark Trumbo cards.  I'm not sure why I was trying to hoard so many of his cards, I guess I thought they would have value.  In any event, they were removed from that binder, and this Trumbo won't be added either. 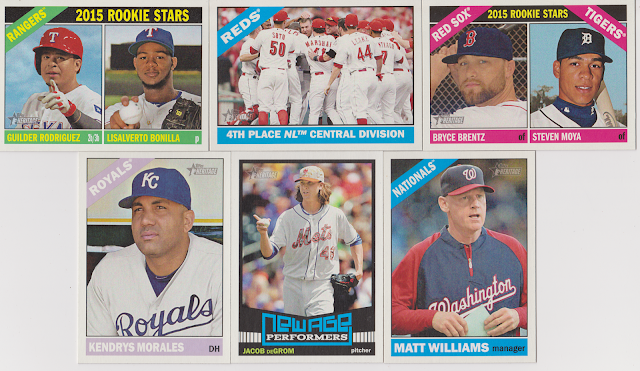 A forth place finish in the NL Central isn't too bad since its a tough division, but not something worth celebrating either.  I also don't understand why we'd want a card of players backs. It looks like a photo I would take.  Maybe I can freelance for Topps.

A few rookie cards of guys I don't plan to collect, but I do like that they get face time.  I'd prefer if there were two on a card it was guys on the same team like the Rangers one, but hey, I'm not keeping them, so what do I care?

Bottom row look like all keepers.  I forget Matt Williams manages Washington, I would assume this is the Matt Williams who played for the Giants, and not the one who worked on the TV show Roseanne.

A Royals card!  It's nice to get new Royals on cards.  Like Rios, I wasn't mad at the deal KC made for Kendrys Morales, and so far it looks like it worked out.  I might go after the team set sooner than later, I like the look of these cards, though I'm not sure why they chose purple.

A New Age Performers card of Jacob DeGrom.  If I had MLB TV I would likely watch the Mets (if I couldn't watch the Royals).  I've always secretly rooted for the Mets, and it looks like they have some nice talent.  The benefit of having my favorite team play in the AL is that I can root for more teams in the NL.  I secretly root for the Mets, Pirates... okay, maybe just them, but still I can root for them on most days. 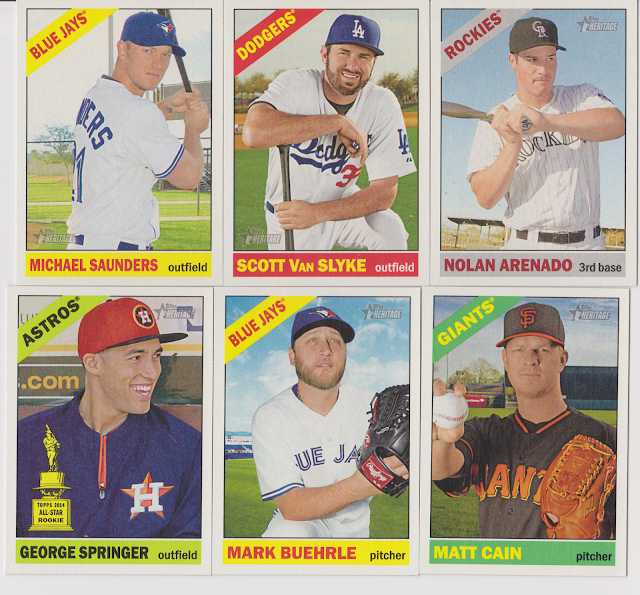 A couple Blue Jays, George Springer, and some NL West foes wrap up this pack.  I am rooting on the Astros to have a great year as long as it doesn't interfere with the Royals.  I won't be mad if they take care of Oakland for us either.  That Rookie trophy on the Springer card though is a bit too big.  I wonder if Topps makes actual trophy's and give them to the players for winning Topps awards.  That would be nice.

So, if nothing else, these two packs gave me the fix I needed.  Nothing really earth-shattering but still some nice cards. My three favorites are probably Kendrys Morales, Jacob DeGrom, and Tim Anderson.  I have some more packs to show off in future posts I already scanned.  Thank goodness because 100+ heat index is looming, and the A/C won't stay unplugged for long.

Email ThisBlogThis!Share to TwitterShare to FacebookShare to Pinterest
Labels: 2015