Today is a new day, one where I should do a little cleaning.  So I'm cleaning out my scanned folder and showing a few recent Listia wins. 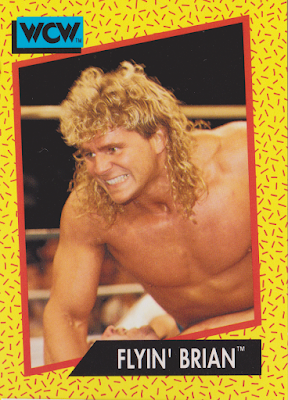 Let's start with some High Flyin' action.  If 1991 Fleer had a baby with Mike & Ike, this would be the result.  Also from 1991, this is a WCW wrestling card of Brian Pillman.  For whatever reason, this doesn't make me cringe as much as 91 Fleer.  Costing a whopping 112 credits, I now have this card again after having it from my childhood.  No real plans to get the entire set, though I was team WCW all the way.  I was also a fan of Pillman's who life ended all too early in 1997.  My next step is to find a better card of him.  I have others, so I am content on not adding more for a while.

Another win was two Sean Weatherspoon cards.  I don't have a ton of his cards, and since he is a Mizzou product, I tried to remedy this.  I am pretty sure I have the card on the left, so basically I used 499 credits for the other card.  Still not a bad deal, especially since I was the only bidder.  If I do indeed have the one card (or even both), my buddy will add something else to his Mizzou collection.

Deciding I should slowly expand (and I do mean slowly) my Chiefs collection, I found this Martin Bayless card for 99 credits.  I have no real intentions of building my Chiefs collection to the level of my Royals, or even my Mizzou collection, but if I find something dirt cheap, and I remember/like the guy or the card itself, I'll bid.  I remember Bayless somewhat, and I always liked how the 1992 Topps set looked.  Though basically the same as the baseball set, I felt the football cards looked a bit better.  However I have very few, and don't plan on adding more anytime soon.  I passed on a few other Chiefs cards, which I also think went cheap, but as I say some here and there is all I plan to do for now.

I've said a time or two that I was a big fan of Alan Kulwicki.  Recently on Listia someone posted the entire set (I think 15 cards) of this Alan Kulwicki set.  My goal was to get them all, or at the least 4 or 5.  After getting into and losing a bidding war for the first couple, I decided to find the two I like most and defend them.  If I spent more on two cards than the entire set, well, that sucks, but that was my plan.

Things didn't work out that way.  For whatever reason, the person who I believe had the same goal as me and won most of the cards of the set, either didn't want these two, time passed him, or he simply forgot to bid.  In the end I got both of these for a total of 172 credits.  I would have likely gone close to 1,000 each, but was more than happy to get them so cheap.  I picked these two because one showed Alan himself (almost looking like an angel in the clouds) and of his car.  I was shooting for another card showing him in front of his card, but protecting these two cost me the chance at it.  The seller has now listed a complete set on Listia and I am watching it.  I don't think I'll win (or even bid) because it won't go for cheap, but in case it does, I am watching it. 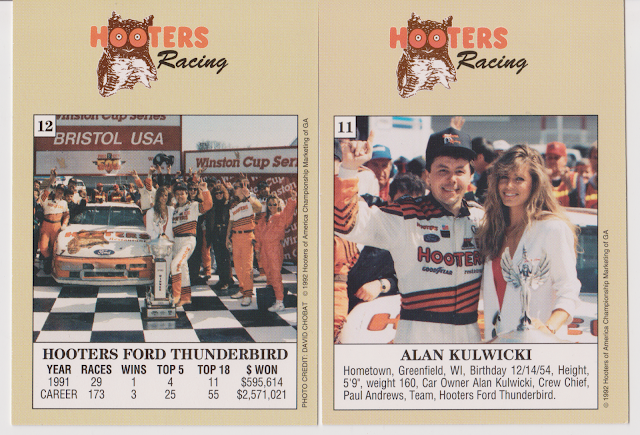 As comedian Rodney Carrington once said "I want to see every pair in here", I decided to show the flip side of the pair of cards.  I really like these cards, and once I got them in my hands I really wanted to pursue the entire set.  So good thing I am watching it still and that the seller waited a week to post the set.  I am skeptical on buying from the seller though.  As I've encountered on a few occasions on Listia (and twice on the same day, I received these the same day as the Pillman card), sellers have unique ways of packing cards.  One that I normally buys from uses flash card to protect the cards, some use folded notebook paper, some use index cards.  Most of those aren't in protector's much less penny sleeves.  I forgive them mostly because they are still okay when they arrive because they took some effort in protecting them (and really I was surprised 3 sheets of folded notebook paper had such good protection).  However these cards (and the Pillman) came in a PWE (as all of them do, no big deal), and NO PROTECTION!  The cards somehow fit snugly inside the envelope and stayed in place and as you can see no damage.  They packed them with NOTHING!  No paper, no tape, no penny sleeve.  Placed the card in the envelope, sealed the envelope, and mailed it.  They also came from two different places- one from Maine, the other from Florida, so half the U.S. with nothing in case of rain, and all the other stuff the mailman encounters.

I didn't complain, and did leave them feedback saying "Thanks" but I really have second thoughts bidding on their stuff again.  On one hand, sure they cards came out okay, but that is really risky.  I would understand if these were first time sellers, but these people have spotless (or close to it) records and over 100 transactions.  It just seemed reckless to me.

Sorry for the rant, I just think if you are in the business of mailing stuff, at least have some level of protection.  Minimalist's have taped a penny sleeve to the envelope with the card inside.  Still not real safe, but again, some effort.  I guess I can't complain too much, as most of the credits I earn on Listia is free, so I'm basically getting free stuff everytime I win something, but still.

Anyways, let's get to the last card- King George. 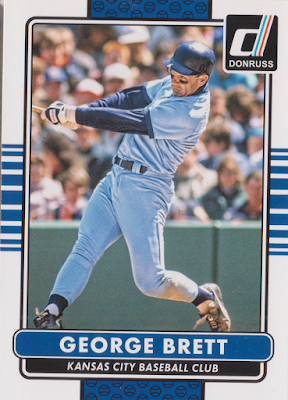 Sorry country fans, I meant George Brett, not George Strait or George Jones.  Piece by piece I have worked on getting most of the cards in the team set (as unorganized as I am, I could have completed it), with George likely being the one that would cost the most to acquire.  Packed securely between two well taped cardboard multiplication cards (I could have had a whole set of those by now if I kept them all, and it actually works really well), I spent a grand total of 152 credits for it.  Not bad for a card a couple months old.  Besides the helmet, you can't really tell they airbrushed logos out.  I will say they have gotten better with that.

Before I go I wanted to say that I procrastinate a lot.  Having said that, I wrote my first blog post for my new site, but haven't published it yet.  As I started writing, it started to veer in a different direction than I intended, but I do plan on posting it soon.  I want to write a few more before I start posting so I can get in the habit of writing for it more.  I am hoping to start posting them in mid-July, and while I do that, post on here may be a little thin (though I do plan on having a special theme week on here at the same time).  Part of the reason I brought it up though is to motivate me to keep working on it.  Like many other things in the past, a lot of my projects are dead ends, so I heard if you write something down it motivates you to do it.  So here we are.

Another reason I mention it is because I want some feedback.  When I start the blog, I figure most of my traffic initially will be the readers I have on here.  I value all the comments I get, and most the time I reply to them all (unless my reply would simply be "Yeah" or "I agree" or something along those lines).  Here is what I'm thinking though.  Eventually I hope to attract a wider audience on there than this blog.  I'm not planning on vacating this blog, I just mean my new blog (which is tentatively called Missouri Sports History) has a much broader appeal I think to more people, which in turn could create more traffic.  I am working on keeping my personal opinions out of the stories I post on there (which will be tough when you root for certain teams so heavily).  Here is where this leads to: I am thinking of using Disqus as the comment board for the page.  It is one of the most popular comment boards on the internet and it would I think draw more comments to the page once enough people start reading.  Do you guys agree, or should I stick to what I have going on here?  I admit, I like how the one on here is set up, much better than the Google one, but I admit, I have thought about using Disqus on here as well.  I'm not sure how many of you use it though so I don't want to alienate people from commenting.  If anyone has opinions one way or another let me know.  If nobody cares or responds, I'll likely keep it as it is on here and add Disqus on the other site.

Thank you for reading a fairly long post, especially the last few paragraphs.  I hope everyone has a great day!