ORDER IN THE COURT!

Thanks to Angels In Order for the cards you are about to see.  I need to see what I can give him in return.  Check out his blog if you haven't yet. 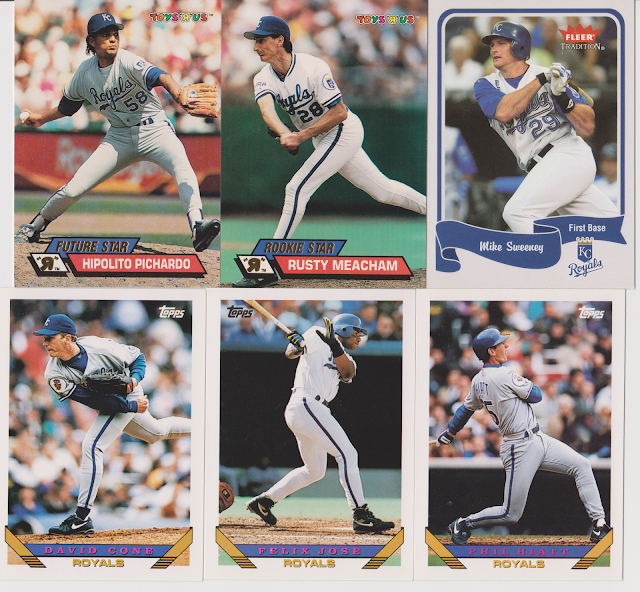 The whole reason he struck up a conversation with me is because he had these Toys R' Us cards.  I told him I probably didn't have them without looking them up.  When I got them I realized I never even seen them.  I wish I would have went to Toys R' Us more as a kid, but luckily for my parents there weren't any nearby.  The one closest to me I don't think opened until I was in double digits in age so I lost out.  I don't even go there much now, especially since the Circuit City went under that was housed next door.  These days if I go there, it is mainly to get ball cards, but I don't even really do that much.

I didn't have the Fleer Tradition card of Sweeney either, so its a nice addition.  The Topps cards on the bottom were also new to me.  I liked the 1992 Topps set, so adding these were nice. 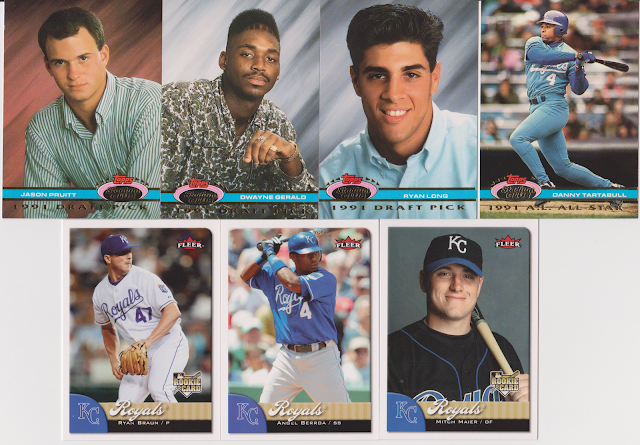 Senior picture time!  The only one of the three draft picks I remember is Jason Pruitt and that is because he was supposed to be a big deal.  At least the Danny Tartabull card lifts up the team set some. Bottom row is more Fleer which I'm glad I got because I didn't plan on chasing them anytime soon.  2015 has been the year of the OTHER Ryan Braun for me.  I went from zero when starting my blog to I think about 5 now.  Also worth mentioning is the black Royals jersey on the Mitch Maier card.  The Royals had some bad jerseys from the time George Brett retired and Ned Yost became manager.  The black ones were one of the better decisions, but I'm glad they aren't in regular rotation. 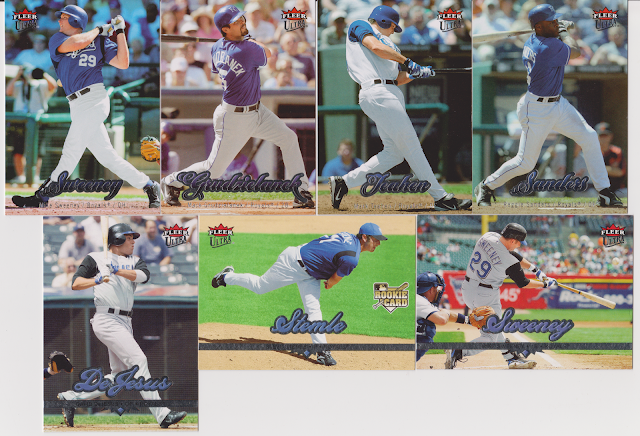 Some Fleer Ultra cards that at first glance I thought were the same year, but it was just Fleer being lazy.  Upper Deck did it too for a while.  A double dose of Sweeney, David DeJesus, Mark Teahen, and more.  There were likely more cards I wouldn't have chased for a bit.  I think the only ones I had I got in repacks, so I still have a few to get. 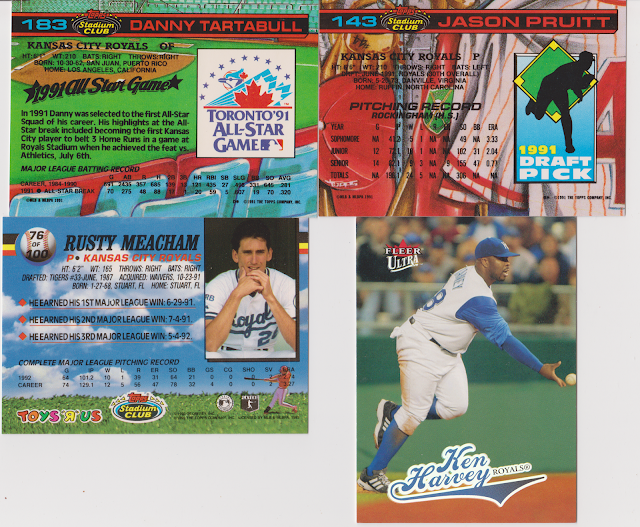 Since Ken Harvey didn't deserve a scan by himself, I added some backs.  The Meacham is the Toys R' Us card (as you can see).  I like how they designed that set to be honest.  It was much better than I anticipated.  The other two Stadium Club cards aren't as appealing on the back, but I still somewhat like the designs too.  Since I'm the only one not a fan of this years Stadium Club offering (great photos, not a fan of the design), these might be my only SC cards this year.

Finally is Ken Harvey.  It appears he is throwing the ball to the pitcher who is covering first.  I couldn't see him at any other position, shoot I would have to think hard to see him at first in the first place.  He's also wearing one of those "bad decisions" jerseys of the early 2000's.  It fits right in with the Ultra offering.

So thanks again to Angels In Order.  I had planned to post this last night, but I took a nap and then it started storming with some severe weather in the area, so I held off until today.  Thanks everyone for reading, and thanks to all the new people following and reading my blog, I really appreciate it.  Have a great day!