How do you come up with a clever headline using the word Papoy?  That could take hours.  I decided not to be so clever and used something generic. 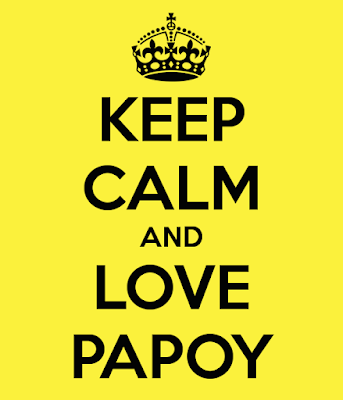 I am not up to speed on Minion talk, but one of the last movies I saw in the theaters was the first Despicable Me.  To be honest, I didn't care for it.  I only really went because my sister took my nephews and I tagged along.  They loved going to the movies, and since I got to see Toy Story 3 with them, I figured I might as well see this.  It wasn't like I went to the movies often anyways.  Probably a dozen times or less in my life.

None of that has bearing on today's post.  Papoy is card talk for Kevin.  Kevin from The Card Papoy that is.  He is an excellent blogger from France.  A while back I won a contest he held which was a slot in a monthly box break he holds with Matthew from Bob Walk The Plank (which is also an excellent blogger).  The package came a bit ago, but I'm finally posting now. 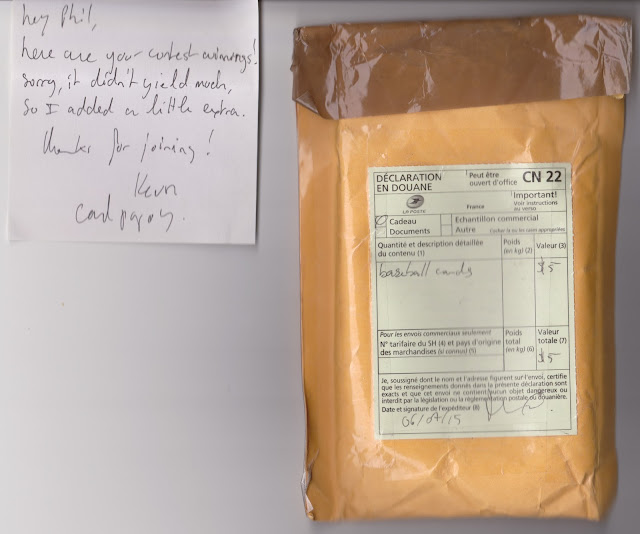 I was stoked when I saw the package, IT HAD FRENCH MARKINGS ON IT!  Also, yes I used the word stoked.  I say it on occasion.  Anyways, this was so cool.  For the record I kept the package.  I also kept the note, but I always keep the notes bloggers write.  Man, this is fun.  It's like having a pen-pal.  I haven't had a pen-pal since I was in high school.  Even then it was a computer pen-pal.  I had a couple people I would write e-mails to once a week.  One was from Colorado, and one was from Finland.  They were both pretty nice, but once Columbine happened internet restrictions forced me to stop communicating with them.  The one from Colorado lived about 25 miles from where the massacre was, but she knew some people that went there.  I found her a few years back on Facebook, but it was more of a cool, I remember that thing, and we never talked after that.  It was nice to hear from her.  The girl from Finland I never found but it would be cool to hear from her.  I'm not even sure what we talked about in the emails.

Anyways, I got way sidetracked, sorry.  I think the only other piece of mail I got from overseas was a postcard from my friend when he went to Switzerland.  It's always fun.

This is a cool Alex Gordon card. The design is nice, a little white but good, and its not overpowering.  It would make a nice card to get signed, I guess that's why they named it Signature Stars and left space.  If I ever meet him, I might use this card to get signed.

The Gordon card is I believe the lone card that was included in the contest.  To be fair though, the base set only had four Royals in it and the other three were autographed cards.  A win is a win at any rate, and it was a card I didn't have, so that works for me.

Kevin also threw in some other cards too, so it worked out well.  I remember him recently opening a box of the Pros and Prospects cards, and I like the design of this set as well.  Upper Deck did a lot of bad/wrong designs, but when they were good, they were some of my favorites.  The year of Sweeney continues with this card and its one I didn't have, so that's great.

This is the third day in a row I've posted a 1982 Topps card.  At this rate I could do daily posts for a year or two and finish the set.  This Dan Quisenberry card is one I might have had already, but if I did, this one is in much better shape.  Once I get everything sorted, I might focus on finishing the Royals team set from 1982 Topps since that was the year I was born.  I have a few of the cards, so I doubt getting the rest shouldn't be too hard.

Here was an Upper Deck set I never recall seeing before, but these are all solid cards, and while he will never be considered one of my favorite Royals, it is nice to add another Jose Rosado to my collection.  I always liked Mike Macfarlane, so this was a good addition too.  The Jay Bell double play card is a nice photo too and a good one too.  I like how he cleared the Royals logo on the card AND the Tigers player.

These Summit Edition Score cards get me. I never understood the reason for the set, but I do have a couple of them. In fact after adding these two to my collection, I only need two more to finish the team set.  I might need to be on the look out for the others.

Next is a nice Star Rookie of Mendy Lopez, who many thought would be a long time player for the team.  Needless to say he wasn't.  Next to him is Sergio Nunez, which if I didn't have a few of his cards, I would have no recollection of him.  Such is life in baseball, some become big stars, others don't.  I'm sure most would give up everything for a chance to play, I know I would... if I had some amount of talent.

This package kept packing a punch.  Some solid 90s sets here.  All some of my favorites, especially the 1994 Topps, though I might have had both of them.  I do keep doubles of some cards, so these are still good to get. The ones on the outside (Nunnelly and Vitiello) are cards I didn't have, so they were also nice additions.  Joe was sporting Spring Training garb in that photo.

Diamonds are forever, and when they are electric diamonds... well.... they are for a lot longer than forever... I don't know.  I need to work on that some.  That Monty card shines though that is for sure.  I might get a double of it and if the opportunity arises, get him to sign it.  It looks like the perfect card to get signed.

The cards next to it aren't too shabby either. David Cone will be a PC I will work on once I'm caught up.  He has many cards with other teams, so I'll have some catching up to do.  It was nice of Topps to put him in a Royals uniform for their insert set this year (I forgot which one it was though).  The Monty next to him would be another good choice to get signed.  Maybe he'll be at a Caravan next year and I can get one of them signed.  I have a card or two of him as a member of the Reds, so I might just track down the rest.  There can't be too many.

Looking back I don't think I had this set of Stadium Club.  I like the design quite a bit.  glad I have a few now.  Nice additions of Gubicza and Gaetti, but the one that excites me the most is the Damon.  It was one that I didn't have, which is a bit shocking, as I now have over 100 of his cards, but I still have many more to get.  The photo looks like its at Kauffman Stadium, but his jersey number looks like its a Spring Training game.  It could be at the K, I'm not sure when he switched his number.  I should look it up.

How about some 2015!  I might have been more excited about these cards than the Damon (I know, shocking).  I have wanted to get my hands on any Finnegan cards I could find cheap, and wanted to get some Terrance Gore too.  So adding these Diamond King cards was something to get giddy about.  Rumors are that Finnegan might be traded so the Royals can get a pitcher, which actually makes me a bit sad, but if it does happen, I'll still follow him and start a PC for him.

Adding the Salvador Perez card to my collection is good too.  I haven't bought many 2015 cards this year and when I've had the chance its only usually Topps, so these wouldn't be added to my collection for a bit.

Who would ever be upset to get a George Brett card.  What I like about the Perez and Brett cards is that they almost look like licensed cards.  Even the Brett card with no logo on the helmet could make you not realize it unless looking closely.  I have to admit, Panini has gotten better at hiding the fact the don't have a licensing deal for the teams.  The cards seem to get better every year.

So after all these cards, you can see why I got excited to see a package from France... but wait, I forgot to show the best card of the package! 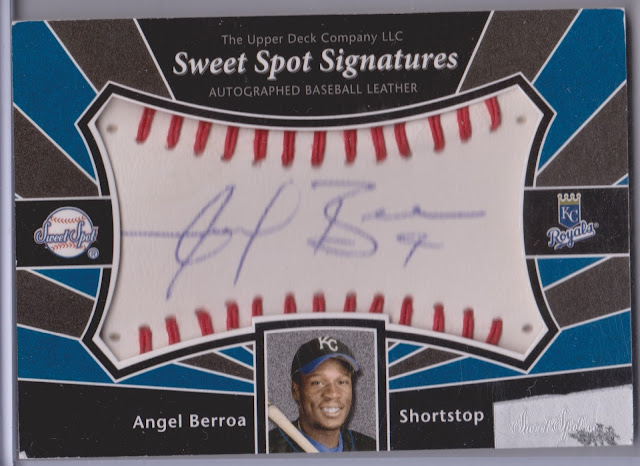 How awesome is this! A Sweet Spot Signature of Angel Berroa!  Berroa may not be the most remembered shortstop in Kansas City, but I was a fan of his.  I was pretty excited when I saw this card.  Then I thought "is that a real baseball?"  So I had to touch it, and it was.  This is one of the coolest cards I now have.  It doesn't matter who signed it, I would have been happy, but being someone I liked is just icing on the cake.

Thanks Kevin for the contest, and for going above and beyond with giving this package of great cards.

That will wrap it up for today, but I still have more packages to show off this week (barring computer problems, which I won't dismiss these days), and I still have plenty other stuff to show.  Thanks for reading and have a great night.

EDIT:  I also wanted to add that I posted the audio of the Royals broadcast reading my Royals memory on the radio.  Funny thing is that the announcer was Steve Physioc who happened to be one of the guys I met at the Royals Caravan earlier this year.  You can hear it HERE!