I touched a bit on some Listia cards yesterday, so I might as well show them off today. 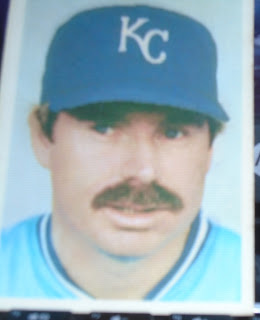 Let's start with a Sportflics card of Quiz!  With recent additions to my Royals collection thanks to bloggers and readers, I have decided not to bid on Royals cards for a bit unless I was positive I didn't have it.  This was one I knew I didn't have.  It was a League Leaders card with three different people on it.  So I had to take this photo with my camera.  Here it is as part of the scan. 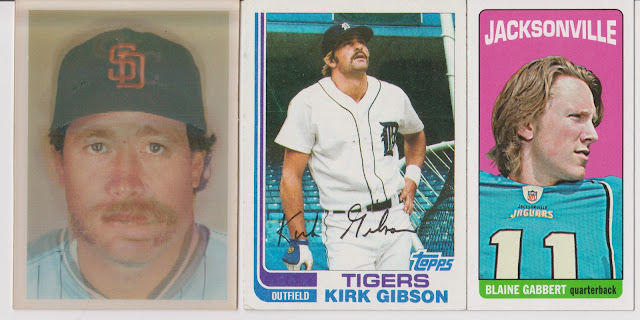 Here is how the card scanned.  You can see some remnants of Quiz, like his jersey and that Magnum P.I. inspired mustache.  It was a nice pickup from a set I don't see too much.

Next is the card I alluded to yesterday.  Nobody was bidding on this second year Gibby, so I bid on it.  It turns out, I was the only one who bid on it.  I'll take it for 499 credits all day.  I wasn't real serious about having Kirk being a PC until I got a lot of his cards from A Cracked Bat last year, but since I've decided to collect his stuff.  It's not hard to find, but if I see one I need I will pay more attention to it.  I'm glad I caught this one.

Next is a Blaine Gabbert card I might or might not have.  I was thinking I had it but oh well, it was cheap.  If I do have it, my friend can have it.  Once I get my Royals collection up to date, my Mizzou collection will get an overhaul. It won't take as long, but I don't want to distract myself from my Royals until I can get it done.

I gave Gabbert a hard time in college, but I also knew he wasn't ready for the NFL.  Throw in the fact that I believe that he didn't get a fair shake in Jacksonville (I personally think he was thrown under the bus, as well as... he wasn't ready for the NFL) and I was glad to see him go to the 49ers.  At best he might end up as a career backup quarterback, but to be honest I've seen worse ones than him.

Anyways, lets see what else I got recently.

The E.J. Gaines card I felt pretty confidant that I had, but since he doesn't have a ton of cards, I wanted to make sure.  I did have it, so I knew my friend didn't so now its in his collection.  Gaines is one of the few reasons I watch the Rams, and was one of the highlights for the team last year.  With a bit more of work he could be one of the best in the game.  I really mean that.

Next to it is a card I knew I didn't have- a Jeremy Maclin.  Most of his cards I have are from his earlier years so when I saw this I kept a close eye on it.  It was starting to creep up in price, but I eventually won it at a nice price.

Next is a Darrell Porter card I figured I didn't have.  I haven't checked to see if I do yet, but I'm confidant I don't.  Even if I do, I can't argue with the price.  It cost 51 credits.  To put it into perspective, I got 50 credits just for sharing the auction on Facebook, and another 10 for tweeting it.  So I made money by bidding on it in theory.  Anyways, who can resist the powder blue jersey?

Speaking of Powder Blue jersey, the rumor is that the make-up game tomorrow against the Royals and Cardinals will have the Royals wearing throwback jerseys.  Which by the way, it is also the game that you can hear my Royals moment if you can hear it on the radio.  I hope to record it and put it on here. I did find out that it should be available on the Royals audio feed on MLB.tv website.  I have a free trial until the weekend so I will likely get the recording off of there once the game ends.

Anyways, back to cards.  The last card said he played for the Royals, and I didn't fact check because it was cheap.  I won it for 154 credits, so I can't complain.  He was drafted  by the Royals, but never made a stop in Kansas City.  He did pitch in the majors for 14 years and had 131 wins, so I think he did pretty well for himself.  He was on the 2004 Yankees team that choked against the Red Sox in his only year in the A.L. but he was hardly to blame for their fall.  He never made it to Kansas City because he was packaged in a deal with Dan Miceli that went to Pittsburgh for Stan Belinda.  What might have been.

Alright it is time for the last card to show, and this one is all about timing. 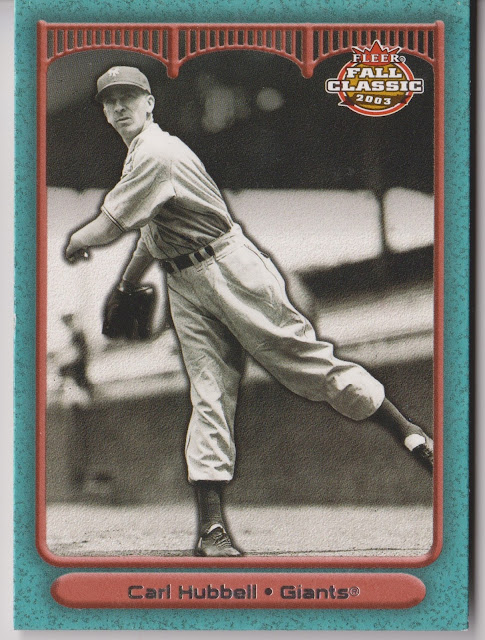 I have been slacking after starting my Missouri Sports History blog earlier this month, but when I posted a couple, one was on the 1940 All-Star Game and the other was on Carl Hubbell.  The reason I picked Hubbell was somewhat random, as I wanted an older athlete so I wouldn't show a bias to a current player or team.  So I looked at the Missouri Sports Hall of Fame website and saw Hubbell was the first inductee.  From there I decided to do the bio on him, and as it turns out, he also played in the 1940 All-Star game.

After I did that post I randomly looked up on Listia to see if there were any cards of him.  It was a longshot but I looked anyways.  It turns out that one was listed.  Then I kept a close eye on it and ended up winning.  I got it for 672 credits, and I would have gone up to 1000 if I had to.


That will wrap it up for tonight thanks for reading and have a great night.