Unlike the previous days, I am writing this one not in advance.  It might explain if there is a delay in posting it (as I've tried to post around 8PM Eastern every night).  I have been very happy and surprised with the feedback and comments I've read, thanks to all the fans who give me further insight on comic books.  I did find a few more the other day, but I will hold off showing those until later, I might do another week next year.  As for now, I fell a bit behind on cards, so I need to get back to posting those.

That doesn't mean we can't have one more day of comics though.  Today is a debuting comic for the site- The Silver Surfer! (I'm not sure if that causes excitement or not, but it sounds cool). 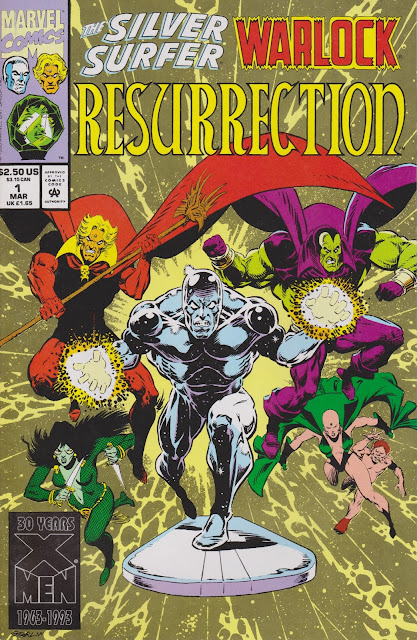 Judging by the cover, I can say its from 1993.  I think most of them this week has been from this timeframe.  I'm glad there was some variety instead of being all the same comic each day.  I'm not sure what everyone's favorite is, but if I do future ones I might look for some variety and cheap ones when I go to flea markets and such. 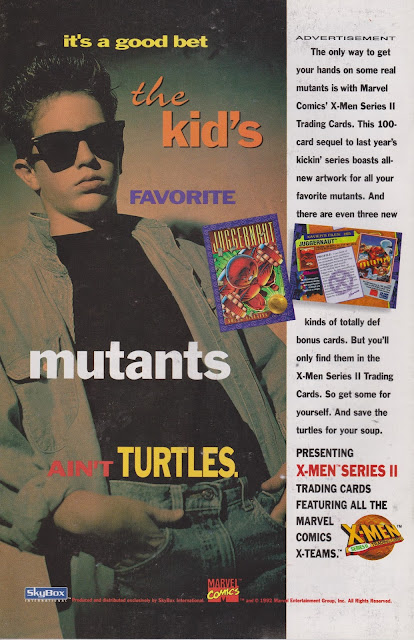 Marvel was getting a little cocky here with shots fired at TMNT, but really by 1993 most of the lust of the heroes in a half-shell was over.  To me the same thing that made the turtle mainstream killed it for me- the live action movies.  Sure I loved the first TMNT movies, but I still preferred the cartoons more.  I think the cartoon ones even made an appearance in the anti-drug cartoon (I forgot the name, but that was something in itself, I'll look for it online one day).  As for these cards, I think I have one I got in a binder last year.  I like it and the design, but don't plan on working on the set.  I think I got Shadow Queen, and I'm not sure who that is. 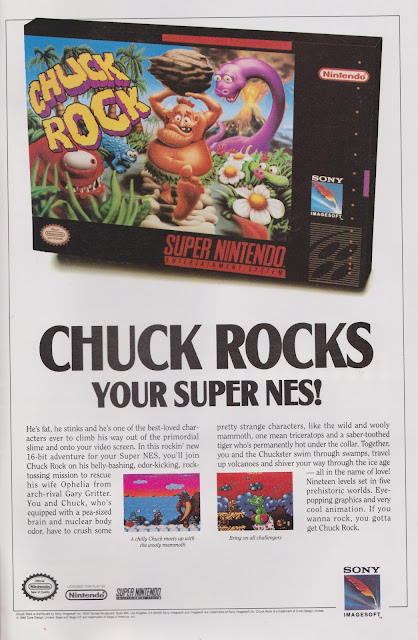 One thing about not have a Super Nintendo was I didn't keep up with all the titles.  While some people was playing this, I was renting American Gladiators for NES at Aardvark Video.  I don't regret it one bit.  This sounds like a stupid game, with an even worse title.  It also sounds like Chris Rock's brother. 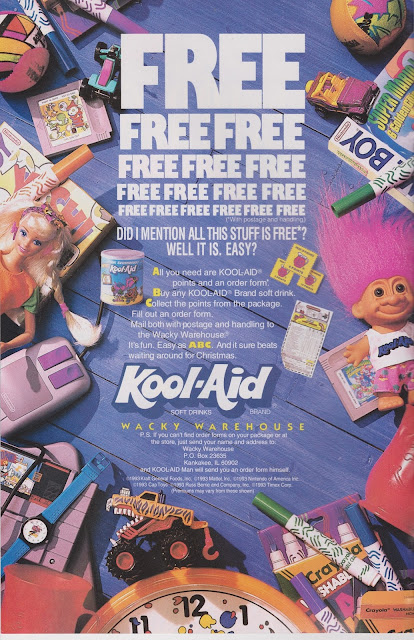 I liked seeing this ad.  I never got anything from the Wacky Warehouse, I'm not sure if I knew about it, I likely did, but I liked looking back at all the stuff from when I was a kid.  Stupid trolls (but I prefer them over internet trolls), Crayola washable markers, a cool monster truck, a watch.  Not bad I guess.  It looks like they had a deal with Mario with all those games shown.  I played Yoshi and Yoshi's Cookie or whatever long after I grew up and don't see the appeal of it.  I would imagine you would have to be drinking the Kool-Aid a lot to like them (see what I did there?).

I would like to have that cup in the bottom left corner though. I had the clear/frosted ones growing up.  I do miss those.  I also miss the names of the Kool-Aid themselves.  I liked Pink Swimmingo I think.  My dad like Grape the best, so we always had that.  I got sick of Grape so I stopped drinking it.

Looking more closely, I do remember the Kool-Aid points.  I cut them out all the time and always looked at the form to see what I could get, but don't remember actually getting anything.  Maybe that's why I collect Coke points today. 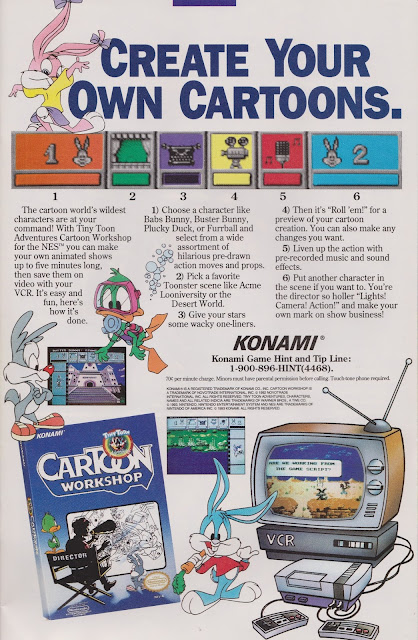 I don't remember Cartoon Workshop, but I don't think I would have cared for it.  This was pretty late in the NES game, so I'm surprised it was made.  I was never able to draw very well, but once I did do an almost spot on drawing of Billy from Family Circus.  I was pretty happy with the result. 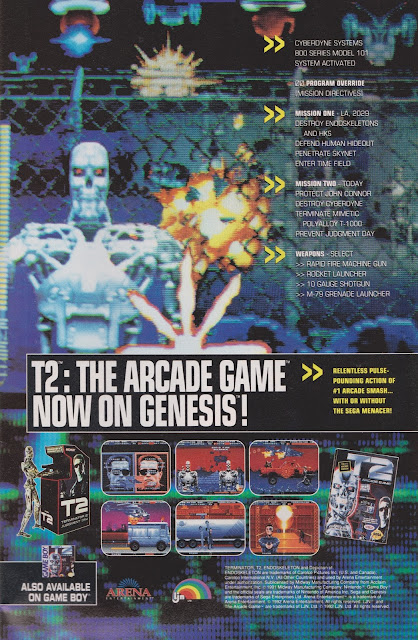 Here's something else I never played, but I did play the first one (I think) on Nintendo once.  I don't know why, but I was never really into shooter games growing up, and don't play them too much now (there are some exceptions though).  Then again I didn't have too many shooter games.  I did have The Punisher, which I liked, and one called Heavy Barrel, which I guess was a shooter game, but I didn't think of it like that.  I also had Metal Gear on NES, which I enjoyed a lot too.  I should find the ROM for that and play it again. 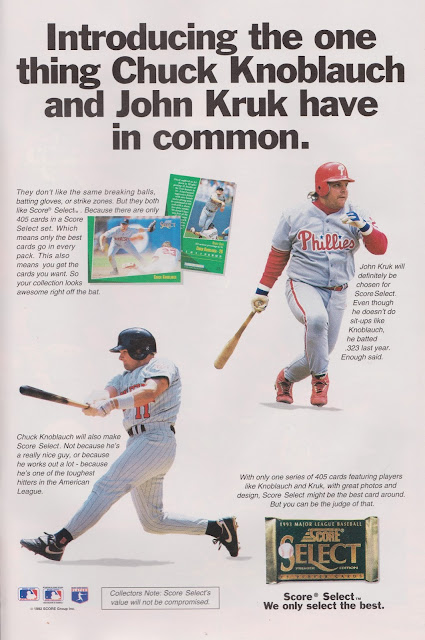 In 1993 it was safe to include Chuck Knoblauch in a print ad for kids. Today he would cuss you out on twitter because he is drunk (true story, it didn't happen to me, but I know a few people who caught he wrath, especially ones who made jokes about his inability to throw in the later years).  I also wouldn't take John Kruk as a poster boy for trading cards either, but it was nice to see someone different besides Griffey (who I like) or Nolan pitching cards.

I liked these cards when I was a kid, they seemed tailored for kids, but they were a bit pricey if I remember, so it didn't work quite so well.  Still, if I had a box in front of me, I would crack it open. 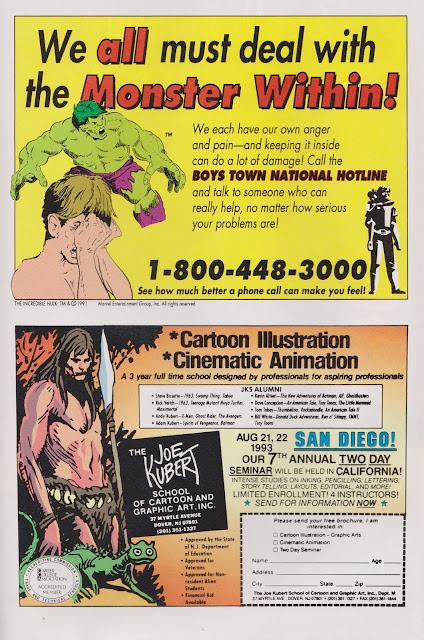 I wasn't going to scan this at first, but there is a lot to digest, so I did.  First I understand the Boys Town Hotline was a very serious deal, but this ad looks terrible.  The concept that is, as the drawings look fine.  At first glance, to me it looks like the Incredible Hulk assaulted a shirtless boy and he's crying as a result.  In reality, I would assume they were going for the boy (who had no reason to be shirtless in the first place) may have anger issues and like the Hulk, could become destructive when he is angered.  The Hotline would help him through his issues.  I just think it could have been done a bit better if that was indeed the direction they were going for.  At the very least, clothe the boy and move the Hulk so he isn't stalking him.

Also, pairing it with the ad under it is a bit odd too.  One could jump to the conclusion that the shirtless boy never called the hotline, and remained shirtless as an adult and still has anger issues.  Also of note is the two day seminar in San Diego.  I didn't look it up, but was that the beginnings of Comic-Con?  Or was it around that time and this was held to draw in some of those people.  Maybe I should look it up later. 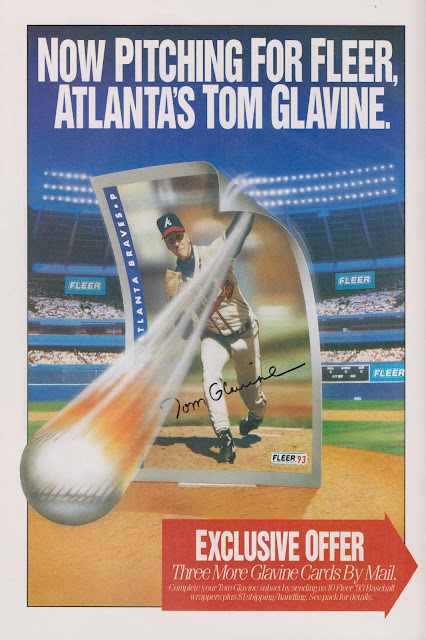 The final two scans are a two page spread that I couldn't do together.  I could have pieced it together, but opted not to.  I liked 1993 Fleer and still do.  I liked the silver border, I thought it worked well.  I prefer it to having silver being and parallel set.  Tom Glavine was a nice choice to pitch this set (I really used that pun twice in this post, sorry, I didn't have a better word for it).  I like this part of the ad. 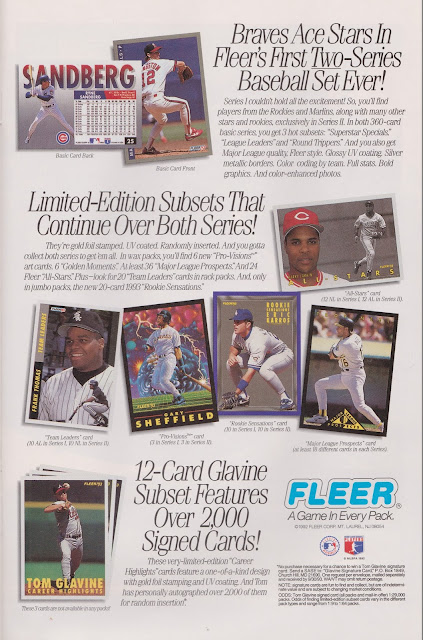 The first ad draws you into the details part.  The back of the cards left a lot to be desired, but otherwise it was a nice card.  I remember a few of the subsets but some look new to me.  I've never seen the Glavine subset, but I didn't collect him as much, so its not a big desire.  After recent good... GREAT maildays, a lot of these older sets are filling out quite nicely (more on those in future posts).  Ads like these bring back fond memories.

Well, thats a wrap!  It has been a fun week, and I really enjoyed doing it.  As of late I was getting a bit burnt out of posting, so this kind of brought some life back to it.  Also in the time away, as I mentioned, I got quite a few things in the mail, so I should have quite a few future posts.

Have a great night!