I was at my local Casey's store yesterday and paid for my stuff and the clerk said "Hmm, I've never seen that before, you have a baseball card in your wallet."  The clerk is a guy I get along with, he's pretty laid back.  In fact he is interested in some of my cards if I ever sell them.  He is looking for some Frank Thomas cards.

It was a little slow, so it gave me the opportunity to mention my blog, but also gave me a change to discuss #WalletCard.  I admit, it hasn't taken off for me like other bloggers, but I never planned it to.  I think its a great idea, and I will do it next year, and maybe then I will take more pictures of it.

Anyways, that was just a little story I wanted to mention before diving into today's post.

I've always seen stories on the news where Stadiums are doing renovations or building new Stadiums, and they decide to sell pieces off.  I usually dream about owning something, mainly a stadium seat or two.  In reality a few years ago I could have probably bought one or two if I really wanted, but didn't.  One day I would like to though.  In my current state, I don't have room even if I did have the chance to acquire Stadium relics.  The closest I could probably come is owning some Stadium Club cards from the 1990s.

During the summer last year, my best friend said he had a chair to give me.  At first I didn't think too much of it.  He usually finds good deals online for stuff and I just assumed he found a great deal and just didn't have the space for it or didn't want it.

His mom's place is right across from where my house is (well, where I was living at the time), and I noticed when him and his wife pulled up.  He pulled a chair out of the back and started to carry it across the street.  I ended up meeting him on the front porch and carried it into the house.

It wasn't a new chair, it looked quite a few years old to be honest.  However it was in great condition, no marks, no holes, really it mint condition.

He told me "I got two of them, but only really need one".  I KNEW IT!  He can find deals like crazy. 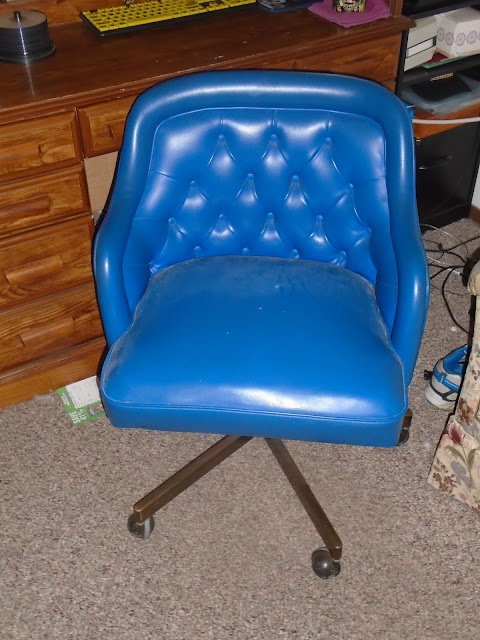 Now, he is an honest man, but sometimes he can tell stories.  He could tell you a convincing story about the time he was mugged, though he never has been.  He has seen and done enough that you could believe anything he says, mainly because he has no tell.  What he said next I found hard to believe.

He then proceeded to tell me a story which could be hard to believe.  It turns out his wife when she was younger lived next door to a guy who worked at the Stadium.  The did some remodeling or something and he got these chairs and gave these the her family.  After cleaning recently they didn't really have them, so my buddy took them.

So he got them for free just like he said.  But could that really be true?  I know what great lengths he will go to for a good story and make it believable.  I believed him though.  I think the deciding factor is most of his stories are about him or something he saw.  Since this story doesn't really revolve around him, I believed him.

Though I believed him, I still wanted some type of proof that these were indeed used at the Stadium.  Since he didn't have an exact timeline of when they were used, it was going to be tough.  He also didn't know for sure WHERE they were used.  They could have been in the clubhouse, the suites, the pressbox, anywhere.  I looked to find evidence for a couple weeks, but since I believed him, I let it go.  If he says they were used there, that's good enough for me.

I planned on using it at my desk at the house, but a short time later (actually I was already in the process) I started staying elsewhere and I never used the chair.  A couple weeks ago though, I sat down at the chair I had been using at my desk and the back broke.  It was an old kitchen chair so no big loss.  However it allowed my the chance to go and get this chair and use it.  I thought it would set too low for the new desk I got recently, but once I sat it down and tried it, I realized it was a perfect fit.

After using it a few times, curiosity got the best of me, and I wanted to find the evidence that this was indeed used at the Stadium.  I also figured I wouldn't look crazy if I told this story on here and had proof.

I was listening to Denny Matthews on the radio one night calling the Royals game and it hit me "search for pictures of Denny from the 80's".  I didn't find any that worked.  Then I remembered Fred White called games with Denny, so I tried him out.  Then I tried a few others, all coming up short.

I let it go, but tried again the next day.  A short time later I found this:

THE CHAIR! I finally found proof!  VICTORY IS MINE!  Then I thought, maybe these were the two exact chairs my buddy got.  Maybe Denny Matthews previously sat in my chair I now use!

I don't think I could ever find a way to prove that, so I'm just happy I finally found this photo.  It would be cool to find out one day that it was one of the chairs they used.  I will say though, I was skeptical when he first said it, but I never thought he was lying, I believed him 100% that it was authentic.  Maybe I should contact the Royals and see what they charge for an authentication sticker and have them examine it.

Maybe the next craze that card companies will do is authentic chair pieces from announcers!  As much of a geek as I am, I would like collect a few of those.

Does anyone have anything from a Stadium when they were selling off pieces?  I might look to see if anything is online soon.  Maybe I can find stuff from the ones in Georgia since the Falcons and Braves are getting new homes soon.  Maybe if the Rams move or get a new Stadium, I can own a piece of the Edward Jones Dome.  The odd thing is that this chair I own is older than those facilities I just mentioned.

Thanks everyone for reading, and have a great night.

Email ThisBlogThis!Share to TwitterShare to FacebookShare to Pinterest
Labels: Royals