Cover of the Rolling Stone

My mind flutters to obscure places as you realized by now.  As I was preparing for this blog, I wanted a semi-relevant title, so I thought of Cover of The Rolling Stone.  I like music a lot, and am fascinated when bloggers mix cards and music, so I wanted to try my hand at this.  Now of course Cover of The Rolling Stone was done by Dr. Hook, and I like that version.  I like the one in the scene from Almost Famous too.  One version blows all of them out of the water to me.  That version is from Jackyl.


I didn't grow up a Jackyl fan.  I wasn't even a fan until about 4-5 years ago.  My sister had a treatment in St. Louis and on this day, her sons and my mom also went.  I was going to go with them while she had treatment and I think go around St. Louis, but I got sick upon arriving at the hotel.  So I spent the day in bed.  I was flipping through channels mainly to find something to fall asleep to and found a show on TRU TV called "Full Throttle Saloon".  It didn't sound too interesting, but it was noise and thats all I needed.  It was a reality show about a biker bar in Sturgis, SD during rally week.

I'm not a reality show guy (aside from Apprentice and a couple others), and I'm not a motorcycle guy, but again, it was noise.  I slept off and on that day, but I would keep hearing a guy say PUH-POW! every few minutes.  Giving up on sleep I watched it for a bit.  It was interesting.  The PUH-POW guy was Jesse James Dupree the lead singer of Jackyl.  When it ended, another episode came on, then another.  It was a marathon leading up to a new episode that night.  By then I was hooked.  When I felt better and got home, I checked out the catalog of Jackyl songs.  I felt bad for not checking them out sooner.  Their most famous song is The Lumberjack Song, where Jesse plays a chainsaw during the song (yes, he uses a chainsaw as an instrument).  It's my favorite of theirs but also enjoy songs like When Moonshine and Dynamite Collide, and My Moonshine Kicks Your Moonshine's A**.  I was see Tru TV cancelled the show last year, because I thought the idea was interesting if not a bit dramatic for tv purposes.

Anyways, my scattered mind made me write too much.  Just like a Simpsons episode, the first part has no real bearing on the rest of it.  So why did I choose that as the title? 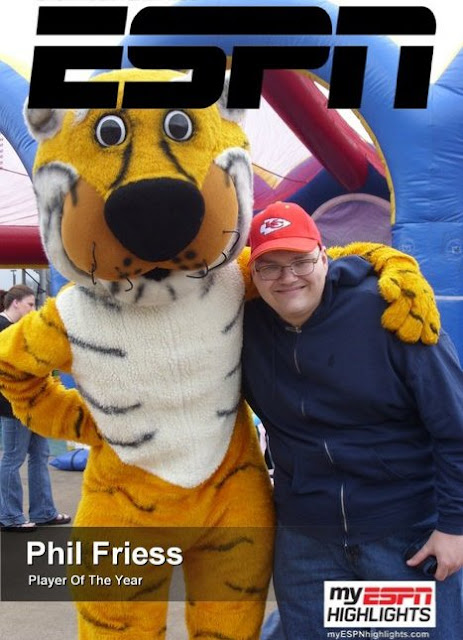 Ok, that's likely the closest I'll ever get to the cover of a magazine.  Truthfully, these days if I was offered a spot on the cover of ESPN I would decline it.  I had a subscription, and it was useless.  I read many different kinds of magazines and besides maybe a couple I found nothing interesting in it.  No, here is the real reason for the title. 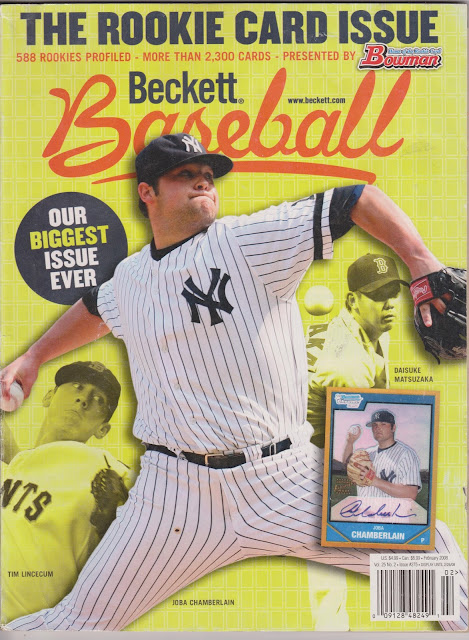 I won an old Beckett magazine off Listia.  My first non-card win, and I only bid because I figured I could find something worthwhile in it, or at the least maybe scan the cover for Trading Card Database.  It's hard to believe this magazine is 7 years old now.  If using the same guys on the cover, I would think Tim Lincecum would be the headliner.

I thought I would scan more stuff, but didn't want to scan all the Rookie Cards they mention at the top, so I scanned the ads.  Let's take a look back at what was being shilled from the last days of George W. Bush as President (I guess he still had a full year, but still). 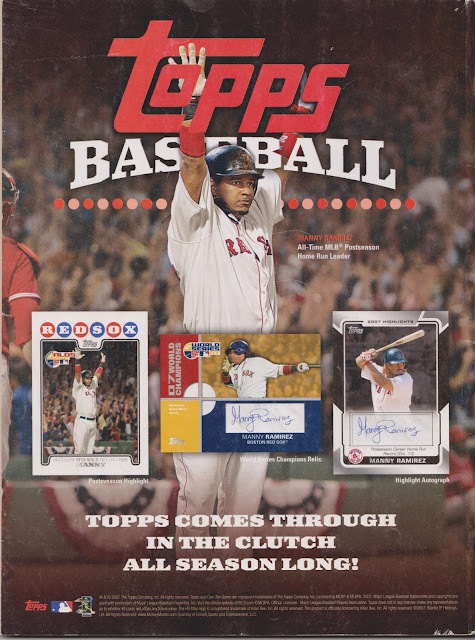 This was the back cover.  Topps went all out to celebrate the Red Sox World Series victory.  I didn't care for the design of the 2008 Topps.  I do like those autograph cards though.  Especially that Highlight Autograph. 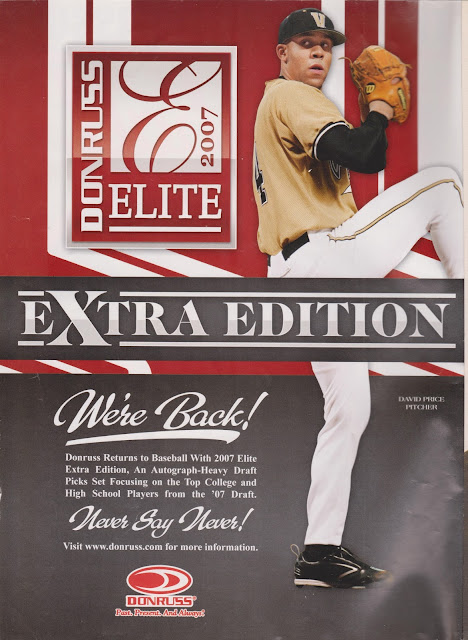 Unless you wanted to see ads of local card shops or the "WE BUY VINTAGE" ads, this was really it.  Another set that didn't appeal to me was the Elite set from Donruss.  Even today I have no real interest in them (but I did buy one recently).  It was nice to see David Price as the featured guy.  This is one of the reasons I bid on this book, to see these ads and who was featured on them.

So with no more good ads, I only have one other scan to show.  I guess I made a big fuss over nothing, sorry. 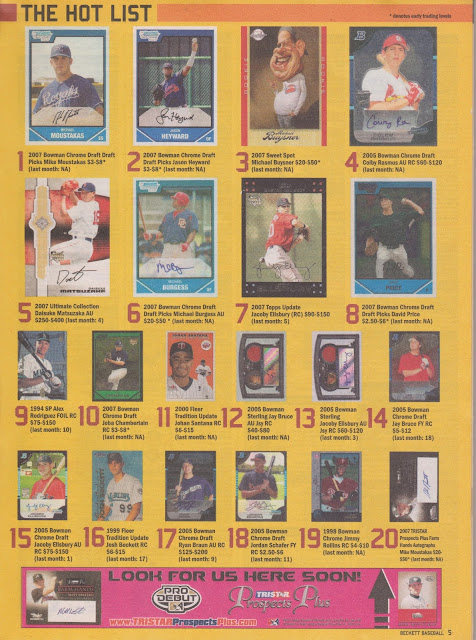 Its the Hot List!  It surprised me to see Mike (MICHAEL?) Moustakas as #1 on this.  It was nice to see a good mix though of players.  Also interesting to see older cards like the Jimmy Rollins rookie make the list.  Without going through my collection, I might have three of these cards.  The majority I know I don't have, including the Moustakas.  I might have the Santana rookie, the Joba Chrome, and the Ellsbury 2007 Topps.  Though I wouldn't be surprised to have none of them.

Besides the Moustakas, I'm curious to see what that Colby Rasmus card goes for these days, I bet its not fetching much.

So after all the hoopla, this was a bit of a bust.  I feel bad about it now.  I hyped it with a long intro and a Jackyl song, and showed 4 scans.  Whats worse is I planned on doing a feature next week similar to this.

Next week I plan on taking a bit of a vacation from blogging.  Well, not really, but I hope to spend more time researching for my new blog, so the posts next week will be light.  However, I plan to have a theme week.  I will probably write them in the next day or so and post them daily next week.

Recently I found some comic books which were likely my nephews.  I'm sure they don't care about them, and I never had an interest in comics.  However, since I like advertisements, I decided to scan the ads in addition to the cover and see what goodness could be found.  If it's successful I might see if I can find more comics cheap, or just old magazines and do it randomly.  However, I call it a vacation because I won't be blogging about cards or my collection.  What is interesting though is quite a few of the comics had ads for cards.  The years are mostly late 90's to mid-2000's but I found a few older ones too.  You'll have to wait and see what all I found.

That will wrap it up for today, but thank you for reading, and thanks to all my new readers and followers, as I've noticed a good bump of viewership as of late.  I hope I am keeping you entertained.  Before all the comic posts next week, I do have some cards to show off the rest of this week, so be on the lookout.  Have a great night.