There are some things you just don't buy at Dollar Tree.  Most food items aren't good ideas (specifically generic brands), and don't expect high quality either.  However, you can get a lot of items there that are worth it.  If it wasn't, I wouldn't go as often.

Okay, I usually go just for the cards, but I still find other things.  That's a good thing because the new Dollar Tree close to home doesn't have much options for cards.  In fact they have 2 options- 15 baseball card repack for $1 or 30 mixed sports repack for $1.  I should try the 15 card option once, but why get 15 when you can get 30?  I bought 3 packs on my last trip.  Let's take a look. 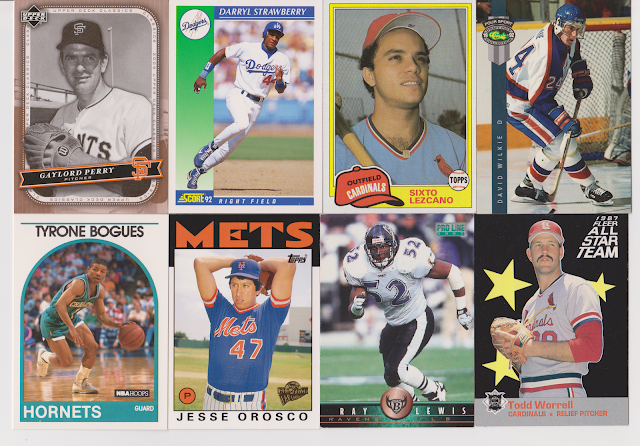 Let's start off with a bang!  Never seen this Gaylord Perry card, but its a keeper.  I like the design.  Darryl Strawberry isn't a bad card to find either.  I probably have it, but I have low expectations on a repack, so its nice to get names I've heard of.  Sixto Lezcano will go in my Cardinals binder for a while at least.  Same goes for the Todd Worrell card on the bottom, but that one will stay in my collection a lot longer most likely.  A hockey card, whoo-hoo!  I don't mind that hockey isn't well represented in these repacks, but it would be nice to get someone I've heard of when I do find them.

Tyrone Bogues was always a guy I rooted for.  Muggsy sadly is probably most recognized for Space jam though. I really like this reprint of Jesse Orosco.  I'm starting to wonder if I should start a binder of Mets cards... I don't think I will.  Finally in this batch is a Ray Lewis I never saw.  I like the design.  I'll keep it for now, but really need to organize my football cards, I have too many.

The rest of the pack was lacking, but thought I'd show a few more.  I'm not a fan of Paul Lo Duca but I love the design of this set.  I first saw it last year when I got an Albert Pujols card, and have seen a few since.  A nice grab.  For a while I rooted for the Atlanta Falcons.  As my passion of NFL has waned, so has my rooting for teams not named the Chiefs.  That includes rooting for the Buccaneers before the start of last season.  It was time to move on.

Finally is a card depicting a briefcase.  Hmm, I... I... I got nothing.  Overall, with the Orosco, Worrell, Perry, and Bogues cards, I think it was worth a buck. 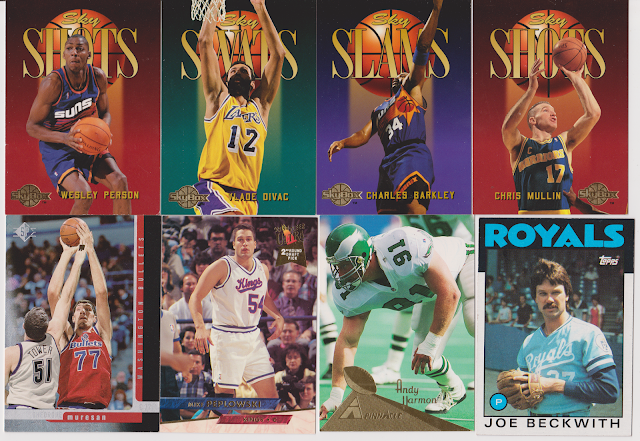 A lot of basketball flavor in this pack.  Starting with a few cards from Skybox.  Some good players, my favorite being Barkley followed closely by Mullin.  There was a 30 for 30 on Vlade Divac (that I forgot the name), which is really worth seeing if you never seen it.

Bottom row with more b-ball.  I never really collected Mureson cards, and to be honest I don't plan to, but the card is a nice design.  I showed the Kings card because I liked the jersey.  I'm not sure if it was supposed to be a throwback, but it reminds me of their jerseys from their days in Kansas City.

I screwed up scanning these cards which is why I included the Andy Harmon card.  I never heard of him, but was going to make a NCIS joke about his last name is Harmon like Mark Harmon who is the star of NCIS.  Oh well, at least I liked their helmets back in the early 90s.

I pulled a Royals card!  I would say 1 in 10 packs I get one, I used to have better odds.  Joe Beckwith is a guy I don't have too many cards of, so I'm not sure if I have this one, but at any rate, it was nice to find. 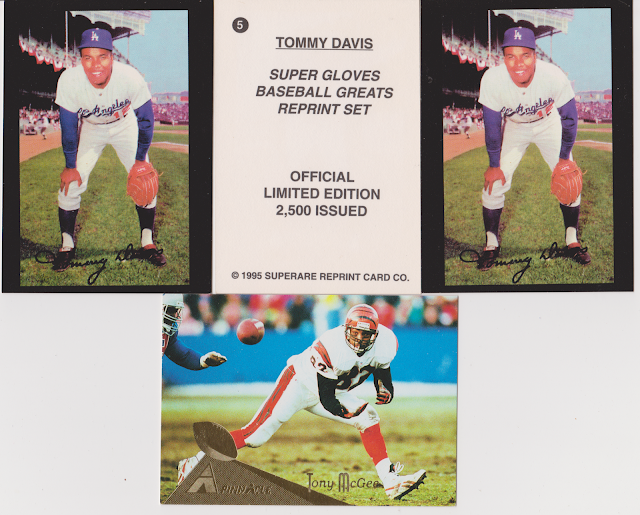 So anyways, I think one is more than I need, so the dupes can go in my can I will give away to someone pile.

Hey its Tony McGee!  This would make for a good NCIS joke.  I should place it next to a Andy Harmon card!  Those who was never sucked into 29 hour marathons of NCIS or never seen the show- two of the main characters are named Tony and McGee.  Long way to go for a joke.  So this pack I guess is worth a buck, it had a Royals card, and 3 basketball cards I will keep, so sure, why not.

Final pack.  Before I show it I will say I was really disappointed with the pack.  After I opened it I noticed the pack most have been slammed around a few times.  Almost all the borders on the cards were in bad shape.  I know I don't expect much from repacks, but the cards shouldn't have rounded edges. 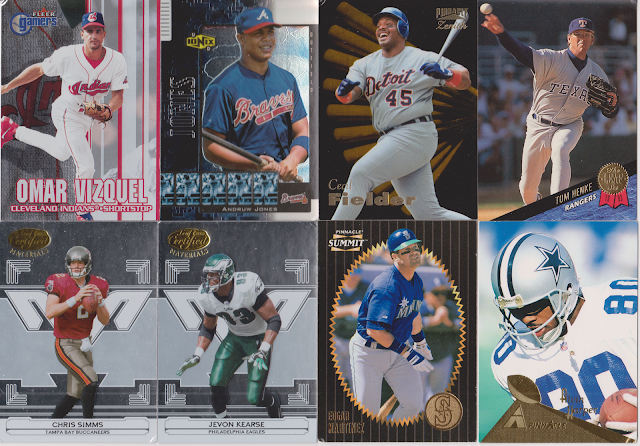 I got a few shiners!  Nothing impresses me though.  I used to collect Simms (because of the Bucs) and Kearse (I think because of college) but don't anymore.  The only keepers in this batch is the Fielder and the Henke.  Henke is a product of Missouri, so while I don't need every card, I do seek them out sometimes.  However I might have this one already.  The Edgar Martinez card was nice too since he has been in the news lately.

I'm convince Jamie Moyer invented baseball.  He has been around forever.  He pitched in 4 different decades, same as Nolan Ryan.  Pretty impressive.  The Wally Joyner card will go into the "once a Royal, always a Royal" collection.  I don't want every card of every player who went through KC, but I'll keep this one.  Not sure why I showcased the Rory Sparrow.

Finally is a Michael Strahan card.  I don't have (m)any of these, so it was a nice find.  Not one I would seek out, but good enough for the binder until I clean it the time after next.

Overall this pack wasn't really worth it.  The names were ok, but factoring in the condition of the cards really brought it down.  I should have picked a 15 card pack instead.

So not to end on a bad note, I'll show a random pack of Heritage because I scanned it the same day and want to clean my scans folder(s) up some. 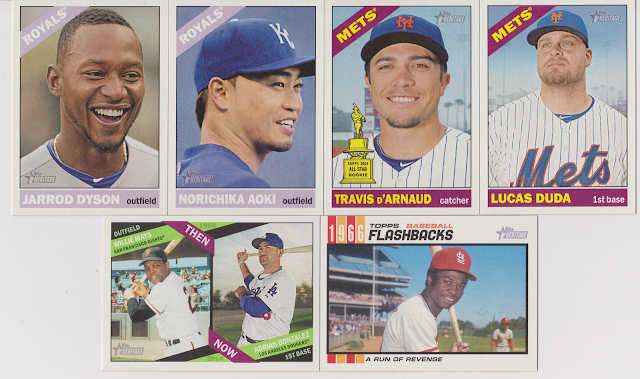 A couple Royals, a couple Mets, and some old-timers!  This was a pretty sweet pack.  Dyson and Aoki bring me one step closer to getting the team set.  It's a bit odd to see Aoki as a Royal in this set since Alex Rios and Kendrys Morales are shown as Royals as well.  I figured they would just exclude him or put him in an airbrushed Giants uniform.

I think the reason I have gotten excited about the Mets is because I saw Jim Breuer is a fan of the Mets and was on one of the local NYC news channels (thanks to Livestream and their live news broadcasts), and his passion excited me.  Plus the uniforms are nice looking too.

Would anyone be disappointed to find a card with Willie Mays on it?  I wouldn't think so.  Same goes for Lou Brock, I would think.  I know for sure that will be inserted into my Cardinals binder.  If I don't have room, I'm sure I can remove a Steve Lake card somewhere.

That will wrap it up today.  I don't have a need to visit Dollar Tree for a while, so I might not get any packs for a while.  I hope next time I visit they have more of a selection.  I'm not sure what the demand is for it, but the box did seem a little empty last time I went, so here's hoping the demand is enough so they can expand what they offer.  Even if it is more Triple Play packs and Frozen stickers.

Thanks for reading and have a great day!