Return of that Online Auction Place

An earlier post I did featured various thing you could find on ebay and stories about why they interested me.  I've been on an Ebay kick lately so I found a few items to show today.  Let me note that I am not advocating one way or another for these items or asking you to bid or buy them, I am just showing you various items I found.

Let's start with a movie.  It has been many years since I saw this movie, and I might have forgotten the way we got the movie, but here is my best guess.  My dad loved going to a weekly consignment auction in Columbia, MO.  He would always go, and half the time he bought something.  He usually never bought expensive items, but he usually found something.  Quite often he found VHS movies cheap and would buy some.  I remember getting the movies Big, and Necessary Roughness among others (some I am withholding for future posts).  I believe this is one of those movies.

Superfuzz was a...um.... well here is the description from IMDB:

Red powder from a nuclear explosion gives a police officer super powers as long as he doesn't see anything red. He is eventually framed for murder and is unsuccessfully executed by many different methods.

Now, I'll be honest, I liked this movie when I first saw it.  However, I never remember watching it again.  I believe I still have the VHS tape somewhere, and if I find it, I will watch it to see how it has aged.  It aged pretty well by the time I watched it.  To be honest though, with all the superhero movies out today, I wouldn't be surprised to see this being remade.  I would likely watch it too.

I decided to show that to see if my sister read this, she likes to joke about the movie.

So let's move on.  People universally know who Bob Costas is.  People may not know he was at Syracuse University where he got a phone call to call games for a basketball team in St. Louis.  He was the announcer for the Spirits of St. Louis (there is a good documentary about them on Netflix, well worth watching).  From there he also would call Missouri Tigers games (he's even in some media guides and programs I have).  That is one of the reason I looked him up on Ebay.  I was seeing how much an autograph would run me.  I found this really cool item. 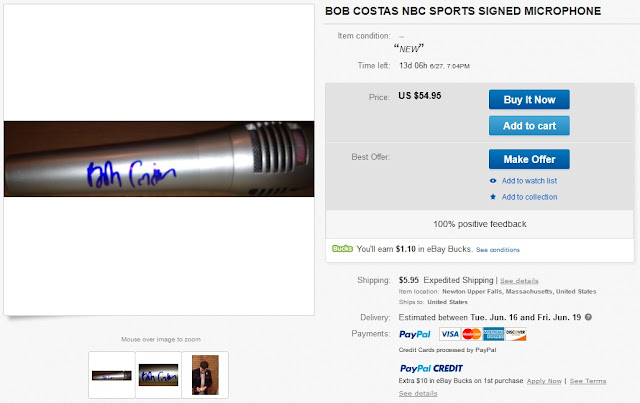 Who even thinks to sign a microphone?  Now if I was in the business to piss money away, I would totally buy this.  Even if that wasn't my business I would consider buying it.  I might have to watch this.

Next is storytime.  I look back at my time at Wendy's and it really is love hate.  I think overall the good outshined the bad though.  I mean I did meet some celebrities... and almost met some too. 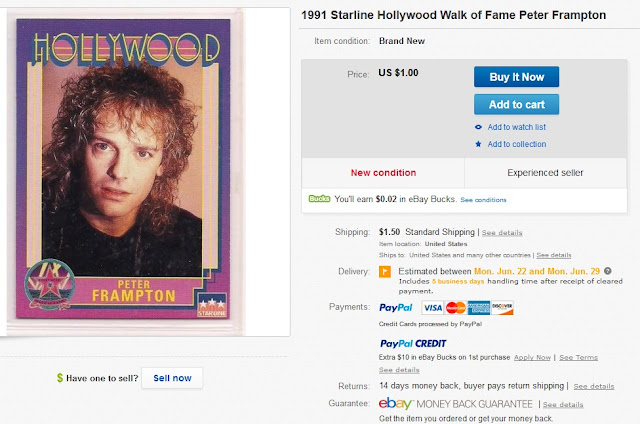 One of my favorite stories I love to retell involves working an overnight shift once.  It was about 2-3 in the morning maybe (our Wendy's was inside a truckstop so we never closed, even when it got flooded).  On this night there were three of us.  Our boss, myself, and an older gentleman named George.  George was a cool cat, and he wasn't old, he was older then me, but well-traveled.

George and I would usually take turns cleaning in the back and doing the grill work while the boss took the orders.  As I recall, I was doing the cleaning at the time, and George was making the sandwiches.  Anyways, a guy came in and ordered food.  While he was waiting he was talking to our boss and it came out that he was the driver for PETER FRAMPTON!  It was pretty cool, though my boss listened to country, so it wasn't her type of music, and I wasn't a big fan of Frampton (though to be fair I liked the episode of The Simpsons when Sonic Youth stole his pig).  I'm not sure if George liked Frampton, or if he just wanted to meet him but he made the sandwiches and started to run out to the back loading dock (busses parked in the back as did the trucks because that's where the diesel tanks were).  As he's heading out there, the driver told my boss (and I was in earshot too) that Frampton was sleeping on the bus.  Through the headset I called George and told him Frampton was sleeping.  He either didn't care, didn't have it one, or didn't hear me.  Next thing I know the back door busts open and I hear George screaming really loud "YO FRAMPTON!  YO FRAMPTON!!!!"  The driver inside was getting worried as we were getting the rest of his food (he was still waiting on fries or nuggets I think) and told us if Frampton woke up he'd be fired because he wasn't supposed to stop.  I went back to the dock to get George to stop yelling and save this guys job, which George finally did.  I'm not sure if the driver got fired, but thought after he left, that kinda was jerkish for Frampton to do for his driver.  To this day I'm not sure if I would have been happier if I actually got to meet Frampton, or being able to re-tell that story.  I think to me, I like the story better.

So let's move on to some stuff owned by celebrities.  These next items have no real attachment to me but thought it was cool so thought I'd share.

Every kid growing up in the 80's loved The Karate Kid.  To be perfectly honest, I remember seeing it when I was young, but never had the attachment most others did to the movie.  I did watch it a few years ago for the first time in over 20 years and actually enjoyed it.  I never got around to watching the sequels.

Who wants Mr. Miyagi's Jeep?  Notice the name of the seller?  Pat Morita's widow is selling his Ford Bronco to a lucky fan.  If you look at it, it is in really great shape.  It's not something I would get, but I thought it was pretty cool.

Maybe you prefer 2 wheels over 4? 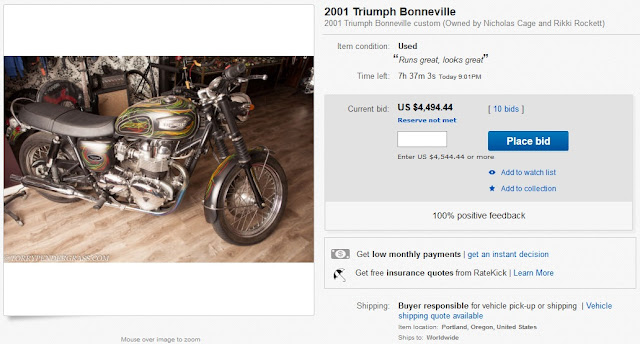 Rikki Rockett had this Triumph custom made.  Nic Cage saw it once and had to have it.  Rikki didn't want to sell it but Cage offered $15,000 for it, so Rikki decided to give up his Rockett.  A few years later Cage decided to sell some stuff so this seller bought it.  Now this selling is downsizing and offering it for sale.  If you are in the market, here's your chance to own a it.

Maybe these don't suit your fancy.  Maybe you need something custom made for Kings.... well Governors. 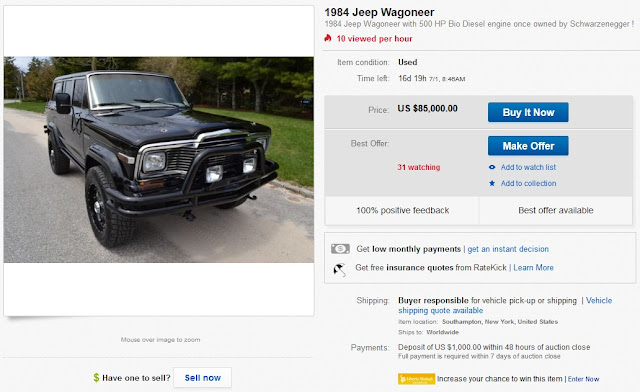 Custom made for Arnold Schwarzenegger, this is a classic!  Well, maybe not a classic, but this is really cool.  It is well worth clicking the link to view all the photos posted.  It is in almost pristine condition.  It even has quotes from the actor/politician throughout.  The price is steep, but it is pretty nice, I could see a collector eventually paying that much for it.

After seeing that last one, I stumbled on a vehicle more reasonably priced, though not really famous. 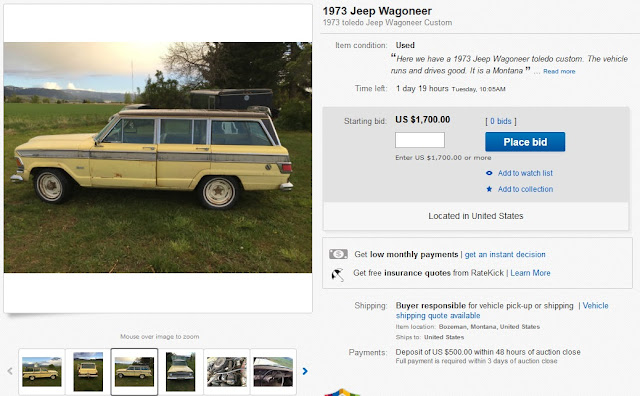 Now this won't likely elicit memories for most of you, but I was very excited when I saw this.  It reminded of a movie my dad used to watch and one I still love watching called Used Cars. 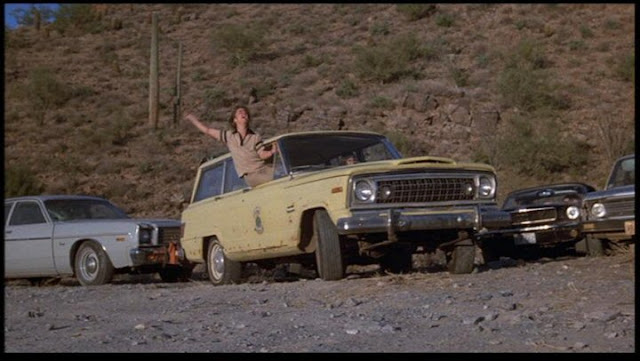 However, this isn't the only reason I gushed over this.  If my dad were still around, he would have contacted this seller already and I have a feeling he along with myself and one of his friends would be traveling to Montana to buy this.  It's not that he always wanted one.  HE HAD ONE!

For many years this was the ride we called old Jeepie.  It went through thick and thin.  While other used cars we would get had fairly short shelf lives (dad liked to wheel and deal), Jeepie was the constant. 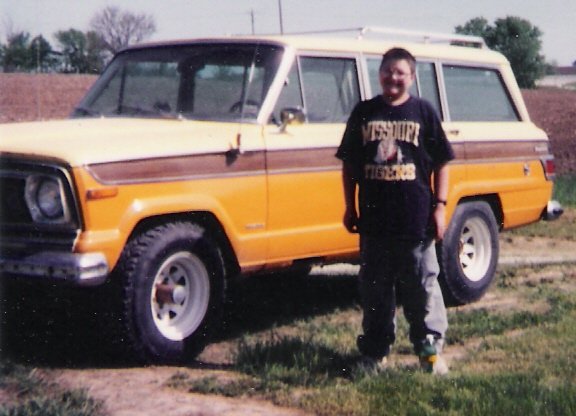 After it started to rust some, dad decided to paint it.  He tried to paint it a yellow more like the original but a bit brighter.  He eventually chose a school bus yellow (not surprisingly since he liked yellow and used to drive the school bus).  This was probably if I would guess about 1992 or so.  It finally was put out to pasture in the early 2000's after sitting for quite a while.

I was so glad to see this Jeep on Ebay, it seemed to make it all worthwhile.

I'm not done though, I thought I'd show off one or two more items.

Earlier this week I was saddened to hear wrestler Dusty Rhodes passed away.  After re-watching several of his clips I was reminded of one specifically.  The Sausage Maker. 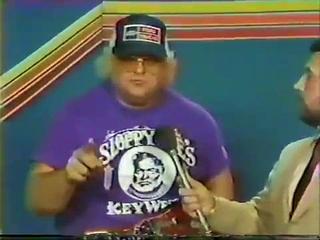 I often think of that promo for a couple reasons (besides it just being memorable).  The main thing is the shirt.  Sloppy Joe's is a bar in Key West, FL.  I'm not a bar person and never been to Florida, but this place sticks out to me.  Mainly because of the guy on the shirt.  That's Ernest Hemingway.  He was a regular at the bar.  Every year the bar has a Ernest Hemingway look-alike contest.  I thinks its pretty cool.

In the early 2000's while goofing off online, I would look for random camera to watch online.  Sloppy Joe's had one and so sometime I would watch the camera and occasionally see a band play or just watch drunks leave after closing time.  The best time was during Spring Break.  After a while I stopped that, but still remember it.

I looked on Ebay for this shirt, but never found a purple one, but I did find this one (sorry no screen shot).  It's the same shirt just different color.  Doubt I would buy it, but still cool

Okay, I saved THE BEST FOR LAST.  Before I show the photo, here is the link, just spend time checking it out.

If you didn't click the link, here is what you missed. 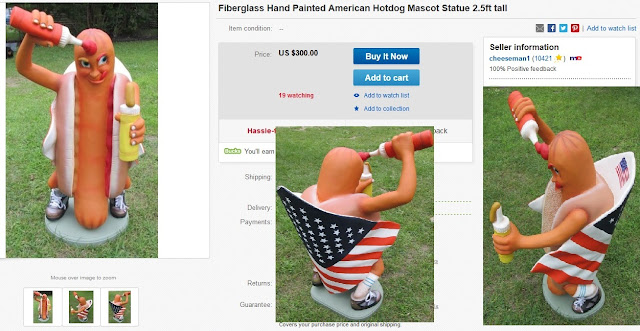 WHAT IS THIS?  Is it even allowed on this site?

This is a fiberglass hot dog who is putting on condiments (I guess it works as sunscreen for him).  There is so much to take in on this.  This is the most patriotic/offensive thing I might have ever seen.  He is all about America, but from the back it looks like he is squatting on it about to do business.  He is naked, yet is wearing socks AND shoes.  This is one of the most interesting pieces I might have ever seen.  Part of me wants it, but another part is repulsed by it.  Another part of me is glad I don't have the money for it or else I'd likely buy it. The only real downside is that its not very tall.  For that kinda of price I would like to see it about double in height.  Make it a true talking point on your front lawn.

So that will wrap it up today.  I had fun sharing stories and posting the randomness known as Ebay.  I hope to do another one day soon.  I hope you enjoyed reading it, and hope you have a great week.

Email ThisBlogThis!Share to TwitterShare to FacebookShare to Pinterest
Labels: Ebay