Topps has been around for a long time, a lot longer than 25 years, but this year will mark 25 years since I got my first baseball cards, 1991 Topps.  I don't really have a connection with that and this post to be honest, I needed a title for the blog, and it just popped in my head this would be 25 years of Topps for me.  So why not look at a blaster box of 2016 Topps Series One cards. I'm not sure where to start really, these photos look like Stadium Club quality, which is really nice.  The Perspectives card of Gregory Polanco is interesting, I like the no border, but not a fan of the writing in the middle of the card and the action.  One thing I am not  a fan of on this years cards are the fact that the whole team logo isn't shown, I don't like it at all really, and one reason I thought about skipping the set (aside from Royals cards).  Though the photo quality does make up for it in a big way.  Beyond a couple rookies I don't know (my main focus the last couple years have been only Royals), not much to say about this batch. 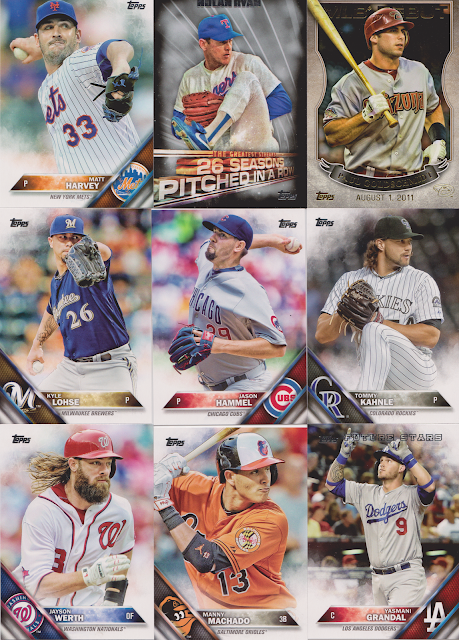 I like the way Jayson Werth's hair is flowing on his card, it makes for a nice photo.  As with last year, not a fan of how they designate the "FUTURE STARS" cards.  It makes it hard to read.  I got a couple inserts in this batch, both pretty nice, but I think the Nolan Ryan one is slightly better.  The Goldschmidt looks like a base card but with more of a border, though it is a nice design though. 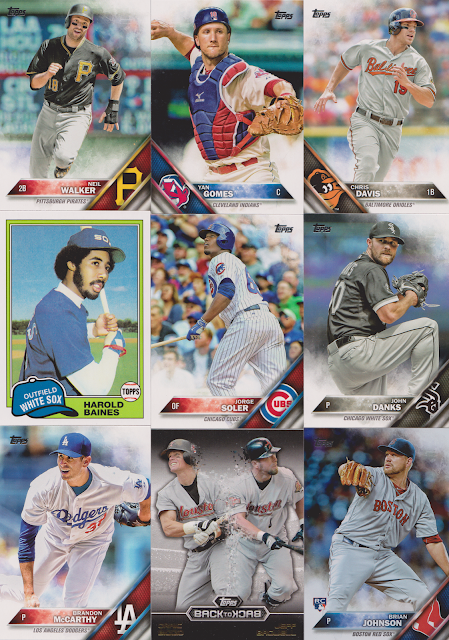 Not much to say for the base cards in this batch beyond the lack of action.  I mean guys running the basepaths aren't that exciting.  I know they are easier shots, but might as well go with posed shots (which goes against what my yearbook teacher told me, about the only thing that she taught me that made any sense).  The Back to Back insert is a bit blah, I'm just not feeling it.  The Baines card is part of Berger's Best cards.  I like the card okay, I'm just not sure how the selection process took place.  I think I might have the original Baines card though, if I do this would go good with it, if not I'm sure I have the 60 Years of Topps one from 2011 with the same front. 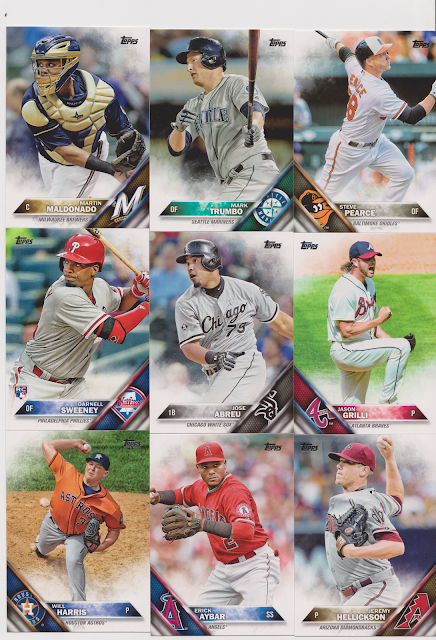 More base cards, the Abreu is the standout I guess.  I didn't hear much from him last year, maybe he's not the next big thing.  Much like Mark Trumbo who a lot of people thought would be huge.  Now I can't keep up with what team he's on.  I forgot Arizona traded him. 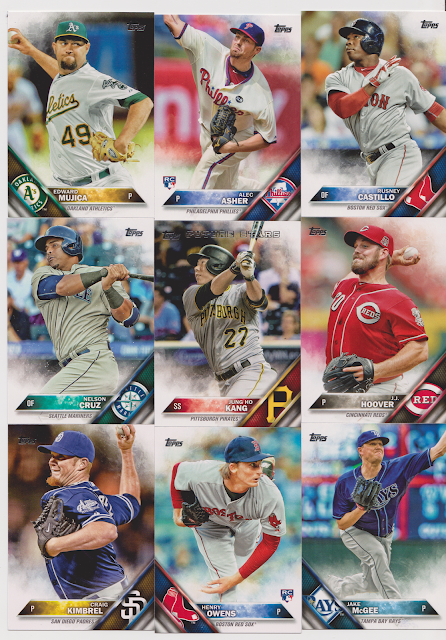 More base cards, at least these are showing some kind of action, though only 3 actually show the ball in frame.  It would be nice to see a batter card with a bat connecting with the ball and the pitcher with the ball just out of his hand, but oh well, I doubt I could take better shots.  The name Alec Asher popped out to me as I had a friend with the last name Asher.  Maybe I'll look more into this guy, maybe I'd know more about these rookies if I studied the cards like I did as a kid.  I still look at the backs of the cards, but not to the degree I did when I first got those cards in 1991.  I'm surprised I didn't spot most of the errors on those cards back then. 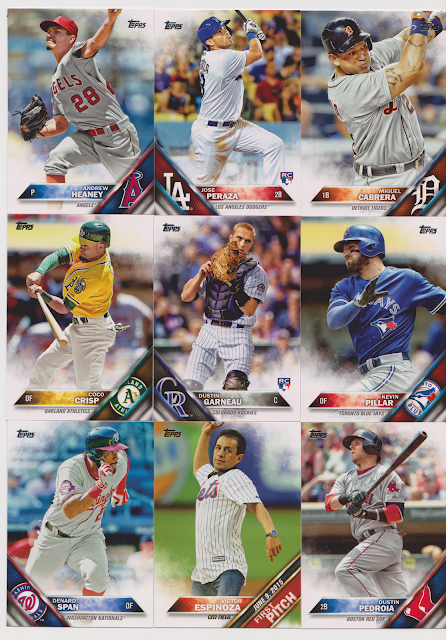 That Coco Crisp card is nice, that's what I'm talking about.  Otherwise more base cards.  I'm fine with getting the base cards, don't get me wrong, I don't expect to get a blaster full of inserts, in fact I thought this blaster had more inserts than needed.  Then again I'm more of a base collector so I think my kind of collecting isn't the target audience.  I still like pulling inserts, but I don't buy cards for them.  Speaking of inserts, the First Pitch card on the bottom is nice but way WAY too much like the base cards you could confuse them if you didn't know Victor Espinoza (which I'm not sure who he is).  I like the design though since no team logo is really needed, the bar works good for it, maybe the base cards could have extended the corner to included more logo then the First Pitch cards would stand out a bit more.

I wasn't sure First Pitch would be back this year, but since it is, I wish all the teams got someone to represent them.  I'm happy a card is representing the Royals again, but I feel bad for the teams with no designation.  Maybe series two can correct this.   Speaking of Royals, have you noticed I haven't pulled one Royals card yet?  It kind of upsets me since they are the World Champions I would think it would be a bit easier to pull cards of them. 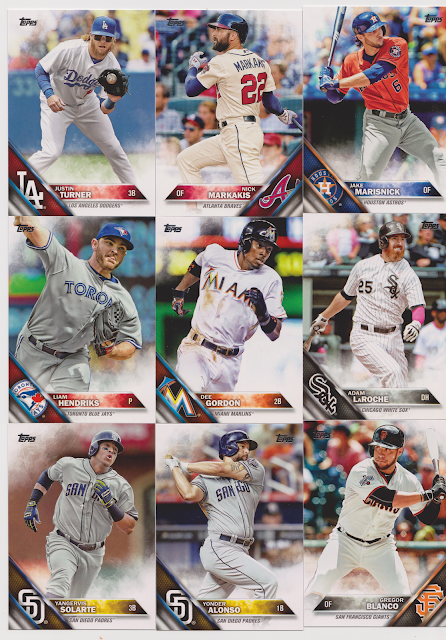 Besides the Justin Turner card, what a blah bunch of base.  You think with fast shutter speeds the photographers could get some kind of action.  The worst being Nick Markakis whose back is shown more than his front, a big no no in my book.  I really don't know what else to say, besides how can I pull back to back Padres, but almost 70 cards in, not ONE Royal?  Last scan is next, maybe I can at least get one... 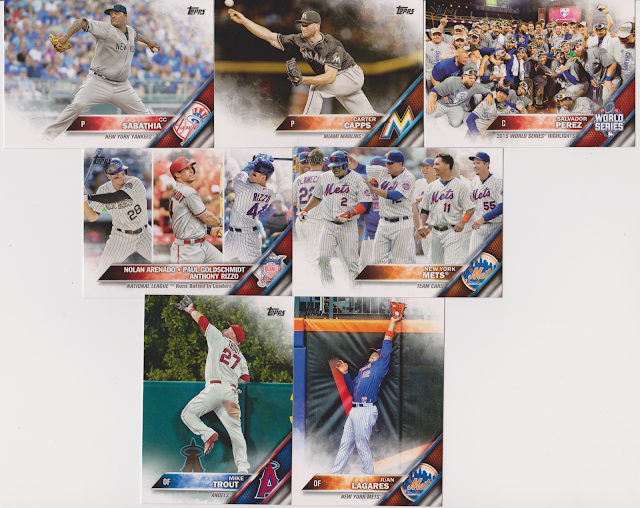 ABOUT TIME!  Even though I like the World Series designation, no team logo in sight, which is a bummer, but hey at least I finally got a Royals card.  It goes well with the what 5 Mets cards I got?  Maybe I'm too bitter about this, but you would think they would do better with randomizing and sorting them.  I'd also think they would add more cards from teams from that general area (i.e. more Midwest teams in Midwest states).  I mean sure I got three Cubs cards, but 1 Royal?  Also did you notice not a single Cardinals card?  I mean I'm not complaining too hard, but still you would think a box of 72 cards would at least try to get one card per team in.  Imagine how mad I'd feel if I was a Cardinals fan, its bad enough I only got one Royals, but if I bought this box and not one card of my team, I doubt I would try to buy packs or boxes.

Besides the lack of Royals, I must say I do like the Mike Trout and Juan Lagares cards as it shows some sort of action,  Trout with some sick air.

Overall, I just can't get past the lack of Royals cards so I can't really say I'm happy with the box.  Maybe I'll try a rack pack next time, and then just check out Just Commons to get the Royals cards.  It seems like a waste trying to get packs and boxes with little chance of getting teams I like.

Maybe I shouldn't be such a grouch, but oh well.  That will wrap it up today, thanks for reading, and since I did some scanning (I need to change the DPI level, took forever to upload these) I plan to have a few blogs this week.  I also just updated my Greg Maddux collection, and also added a list of Albert Pujols cards I have too.  I am getting close to being completely catalogged with only a few NASCAR, some Missouri related cards, and then my Mizzou cards left, so I'm pretty excited.  Hope everyone has a great day.  If the weather is nice where you live, go outside and have some fun this week, Spring is almost here.