I mentioned in my last post about a contest on Baseball Card Breakdown.  If you missed it or have never checked out his blog, it is well worth it to check out.  Gavin makes amazing custom cards.

On the other hand is my custom cards.  I have nowhere near the talent, and I use Paint for my cards.  Maybe one day I will upgrade (I may also actually put the designs on cardboard).  Today I figured I would show off some more recent cards I came up with in a variety of different sports.  Let's take a look. 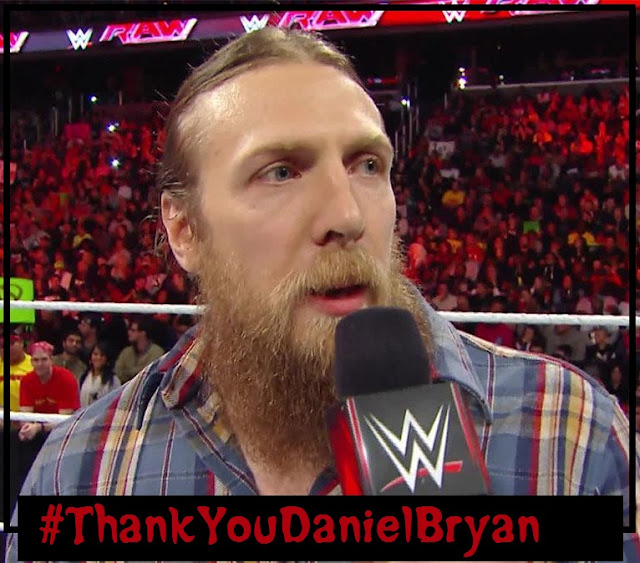 Think of this as a bonus card of sorts.  I didn't spend a lot of time on it because I didn't have an idea of how to make a good design.  This was to honor Bryan Danielson (aka Daniel Bryan) after he recently announced his retirement due to concussions (and risk of seizures).  I was a fan of his before he even came to WWE but he really stepped up his mic skills once he reached WWE.  He will be missed, but glad he retired instead of risking more harm.  Thank you Daniel Bryan. 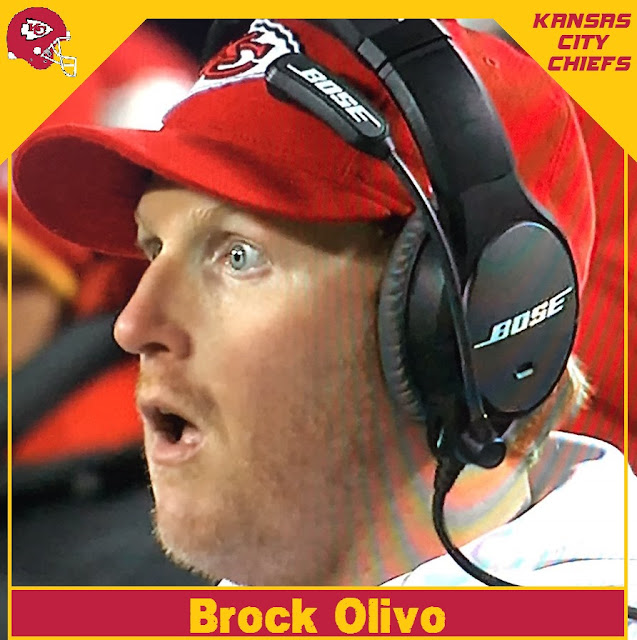 I liked the design until I just uploaded it now.  Something seems off, but I do still like it.  Brock went to Mizzou where he had a unforgettable commercial during his Senior year running up the Stadium stairs, music playing then the words "BROCKY IV".  He is now a coach for the Kansas City Chiefs, after he had a short run in the NFL for the Detroit Lions, and was also a coach in the short lived UFL for the Omaha Nighthawks.  He gained some fame for this screenshot during a Chiefs game on a botched special teams play as he is a special teams coach. 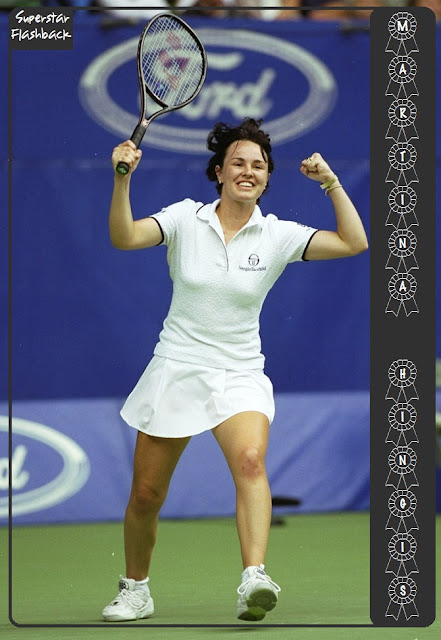 I was a big fan of Martina Hingis when she first began her pro career.  While I had watched tennis off and on before, it was really because of her that I became a big fan of the sport.  I was aiming for a Super Star Flashback insert type set, but now I'm not much of how I designed it, so I'll retool it before trying it again.

Since I had a flashback card, I had to make a more current card for the "Swiss Miss". 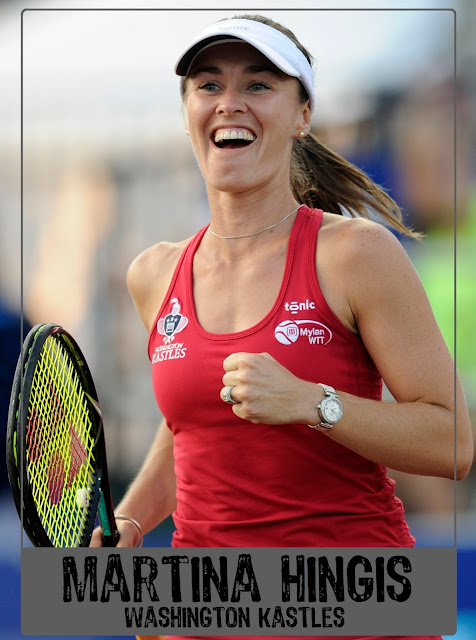 I believe this is from last year while playing for the Washington Kastles of the World Team Tennis league.  Kansas City and St. Louis used to have teams in WTT but now the only team left in Missouri is Springfield.  If I had enough of a heads up I would consider going down there if I knew she would be there to try and get an autograph.  I think this would be a good card to get signed. 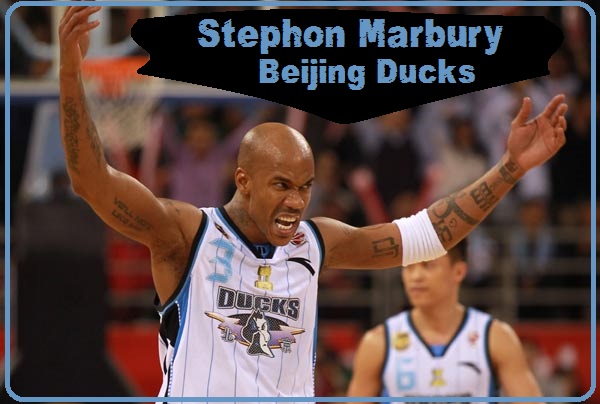 Recently I heard the great news that Stephon Marbury was bringing back the Starbury shoe line.  I bought a pair of the original Starbury's and while I don't wear them anymore, I do still own them.  I hope he makes the same styles as before as well as some new ones.  I also hope his shoes will be more readily available then last time (I luckily happened to find a Steve & Barry's in Springfield- odd how much goes back to Springfield when I've only been there less than 10 times).

This card is of his time with his current team, the Beijing Ducks.  I won't lie and say I keep up with him much these days, but this was a good picture to use as a card, and I'm happy with how it turned out.  I also like the logo of the Ducks.  I hear he does pretty decent overseas, but it would be nice to see him get one more run in the NBA. 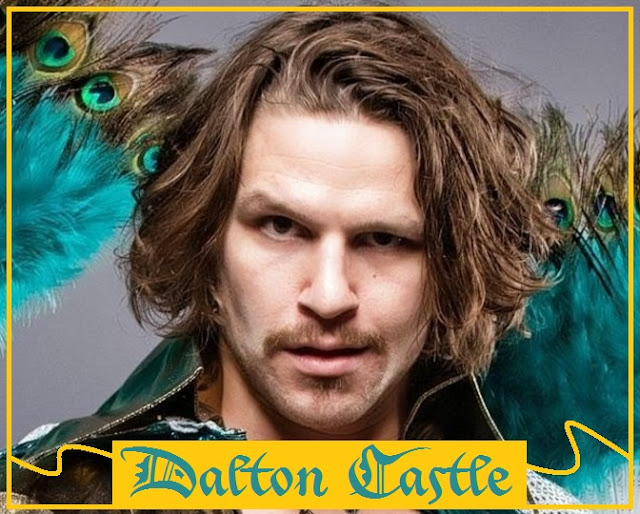 Yes another wrestler card, but Dalton Castle has been one of my favorite wrestlers to watch in the last year.  This time last year I never hear of him, but his gimmick in Ring of Honor is a great mixture of athleticism and showmanship.  I wish he was in a better feud but he gets over really well, and that's all that really matters.  I tried a few odd designs for this one as well as testing out a new font, and I like the results.  I will be testing various fonts for the next few cards, so maybe I'll find a perfect one for a regular set.

Okay, these final two are a couple I love.  One I would say is possibly the best custom I've made yet.  The other isn't too bad either, despite the small picture. 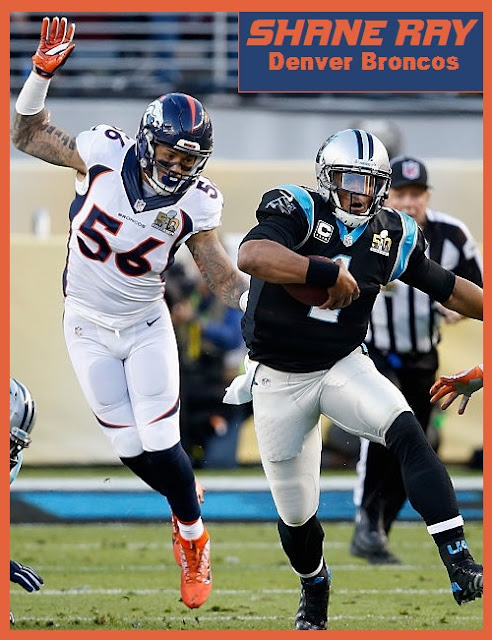 I believe I admitted I had no desire to watch the Super Bowl, and I also admitted I didn't watch it.  However there were two players I was curious how they would do.  One of those players was Shane Ray.  I hear he was a monster in the game, as evidenced by this photo.  By the way, this is from the game.  My only knock besides the small photo size, is that maybe Cam Newton is featured more than Shane Ray is.  Though I think this shows a good pursuit, so it works good. 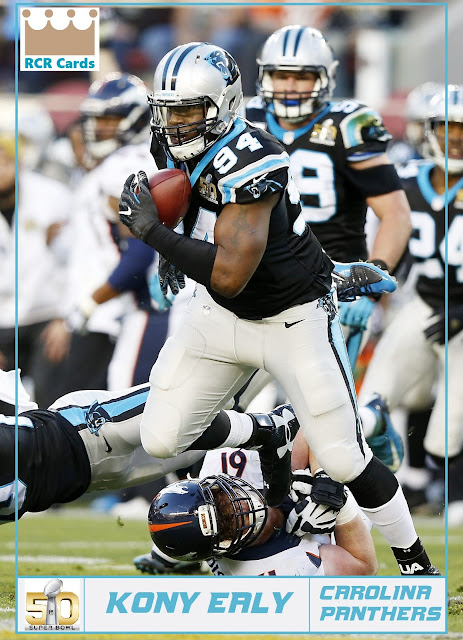 This card is one I am really proud of.  I've said the praises of Kony Ealy for a long time, so I was happy he performed so well.  I hope he can get a ring sometime.  I might have scrunched the Panthers a bit much, but overall I like how I included the Super Bowl logo into it.  Sure its a bit square, but I think the simple design works really well.  I also managed to put my logo back on the card.  I've forgotten to do that for a while, but this one I thought was too good and felt a watermark was worth it.

So that is all for today, but I do hope to do some more soon.  With baseball around the corner, Daytona 500 this weekend, and March Madness almost upon us, I think I have a lot to work with.  I might even try using different software on the designs.  I've dabbled with GIMP before and hear Paint.net is a lot better than Paint, so I might give it a try.  I never got the hang of Photoshop (plus I don't have it), so we'll see what happens.

Thanks for reading and have a great weekend.