Some days I just like looking back at the good old days.  Before you ask what specifically qualifies as the good old days, its simple.  Any day that has already happened.  So not much guessing, just looking back at stuff I remember.  Today will focus on some old Valentines Day cards I had or wanted to have, or just never seen before.  It makes for a quick post, and lost of pictures.  Let's begin. 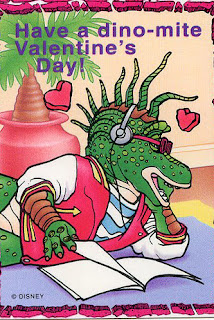 WAIT!!! They actually made this?  Man, I would have loved Dinosaurs Valentines.  I saw one of Baby Sinclair and Mama.  Those would have been a hoot.  Instead I chose the Robbie one because... well, I saw it a bunch of times on Google Search and finally picked it. 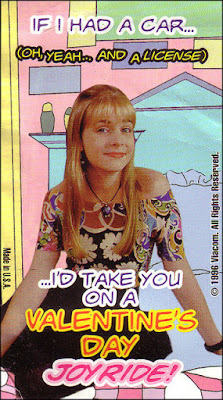 Here's one that I guess would have been okay, but I don't see Clarissa Explains It All as a big seller for Valentines.  I didn't see what other ones they offered, but I figure one was likely of Sam climbing in the window saying something like "Let me SNEAK in a Valentine's Day card" or something equally cheesy. 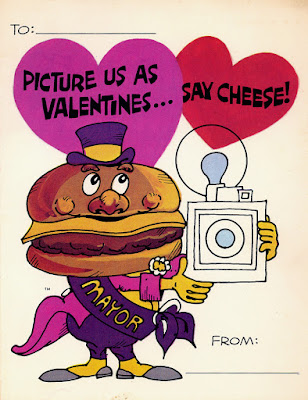 I think this is a little before my time, but McDonald's Valentines sound a bit cool.  This was my favorite among the ones I actually saw online.  I guess most people would want one of Ronald though... 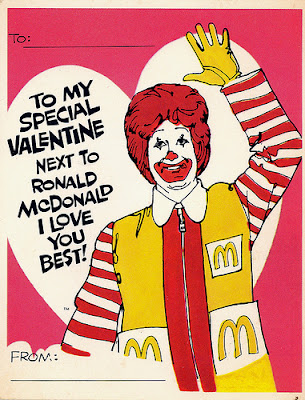 Let's move on to better ones. 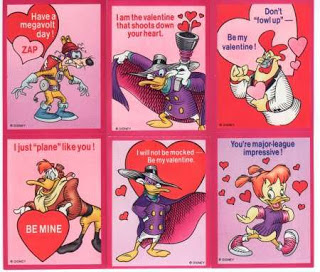 I guess these are cool, I must admit I was never into Darkwing Duck like most everyone else.  I seriously can't think of every watching more than 2 episodes, but if it was on now, I'd likely watch it instead of whatever garbage that is thrown on TV now days. 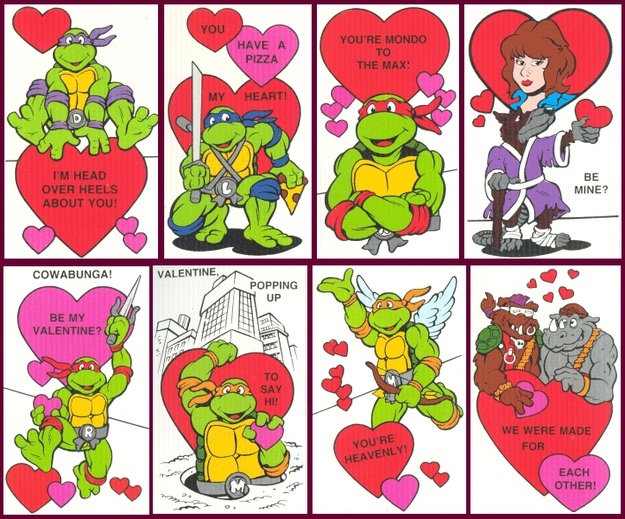 NOW YOU'RE TALKING!  I remember having Ninja Turtles Valentines, but not sure if these were the specific ones.  These look really basic now, but back then these would be probably the coolest ones to get.

I wonder what the pay is like to come up with Valentine cards.  That would be a fun job... Maybe not, but it could be. 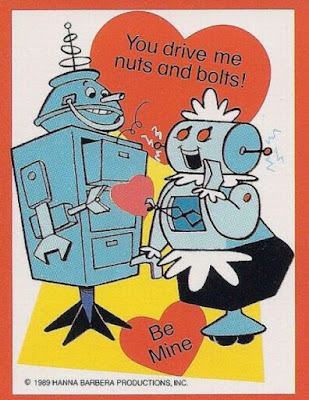 I can't say I remember getting one of The Jetsons, but this would have been cool to get.  I always felt the Jetsons got no love compared to other cartoons, but I really liked it.  The funny thing is though unlike The Flintstones, I can't remember a plot to any Jetsons episodes.  Most were all the same though, George would get in trouble or fired by Mr. Spacely (then somehow redeem himself), Elroy and Astro would do something not much but enough to garner screentime, same with Jane, but she would sometimes mess something up, only for Rosie to fix before George got home.  Then Judy would fall in love with a crush of the week.  So every episode was the same, but slightly different.  I would totally watch it though if I got a channel it was on.   Instead the best I can do is hope for a 3 AM rerun of Phineus & Ferb (which I can't complain about too much, though I don't see it on often anymore since the series ended). 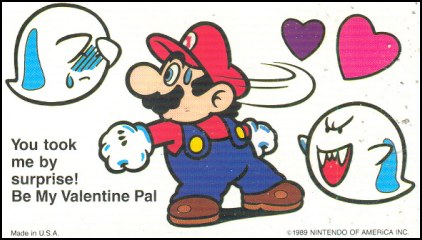 It looks like 1989 was a good year for Valentine's makers.  It might be the last year they actually made new designs until like 1998.  This is a little plain, but a Mario card would get you cool points I'd imagine. 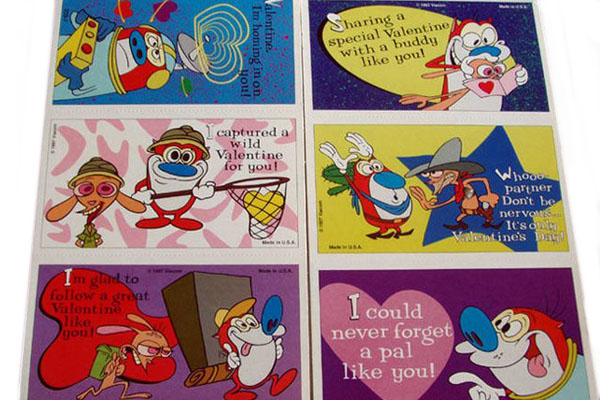 While I don't have these exact ones, I do currently have some Ren & Stimpy Valentine's card from this era.  In fact I just gave one to my friend a couple days ago.  I like these though.  I also saw one of Powdered Toast Man!  I think these are my favorites so far. 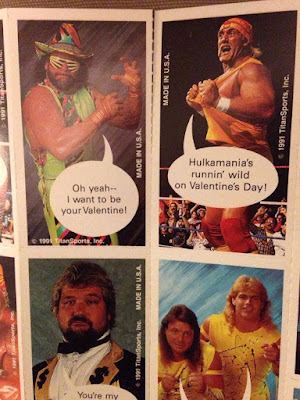 I'm sure I had these, but I don't remember them.  I will say I wish I had them now though.  A blond haired Shawn Michaels! Macho Man!  Hulk Hogan... well, 2 out of 3 ain't bad (hey I even liked Hulk at this time).  I remember buying some WCW ones years later, but past my elementary days, I'm not sure what happened to them. 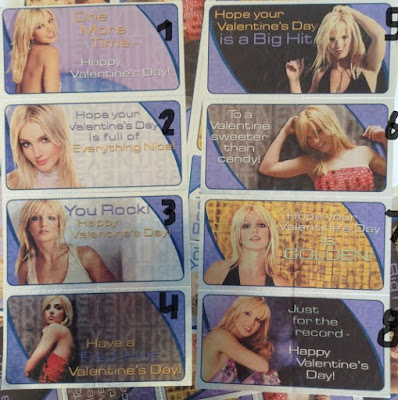 I don't care what you say, these are awesome!  It's possible I bought some of these, because I loved Britney when she first hit the scene. 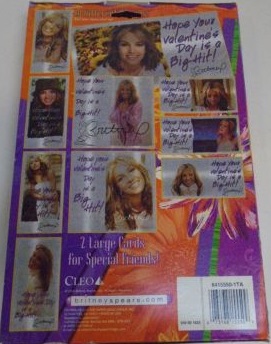 These without a doubt I did buy.  I might even have some stashed somewhere.  Man, how lucky was her first husband? I mean sure their marriage only lasted what 55 hours, but he was married to BRITNEY!  Plus it was before she went nuts, and before she hooked up with K-Fed.  So it was the best thing that could have happened to him.

I'll always have a special place for Britney.

Before I get too creepy, maybe I should wrap this up. 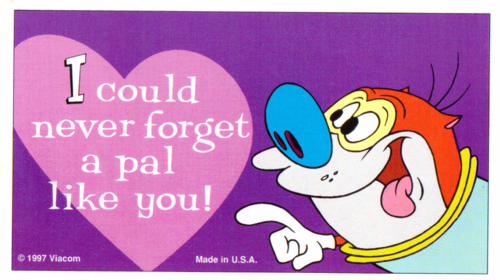 Sure I showed this already, but this is for all you readers out there, thanks for viewing my blogs, it really means a lot.  I'll even give you a bonus card too. 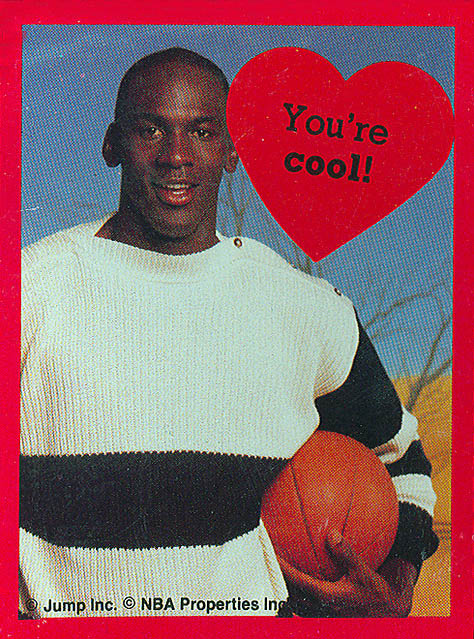 I had to include a sports related one somewhere.  I remember these, and it meant a lot to get one.  I hope it means a lot to you.

Of course, there is only one Valentine that has any real value these days.  You aren't hip if you don't get it.  So for that I will include it as an extra bonus today. 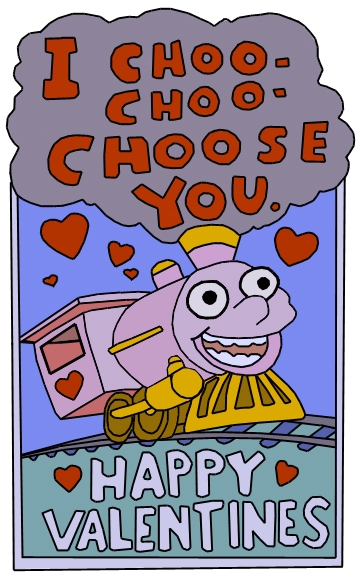 Thank you Ralph Wiggum for putting so much stock into Valentine's Day.  Thank you all for reading as well.  I hope you have a great day, night, weekend, and if you are off tomorrow, a great President's Day.  I think I have something special for that too, you'll have to wait and see.

This has been fun.