So today begins what will likely take a few days to sort through and post, and I'm still not finished scanning cards yet (more because of laziness on my part).  However, the cards I show today are parts of sets that I got from this big bag of cards my sister bought me a while back.  For a refresher, here is what the cards looked like before I dug in. 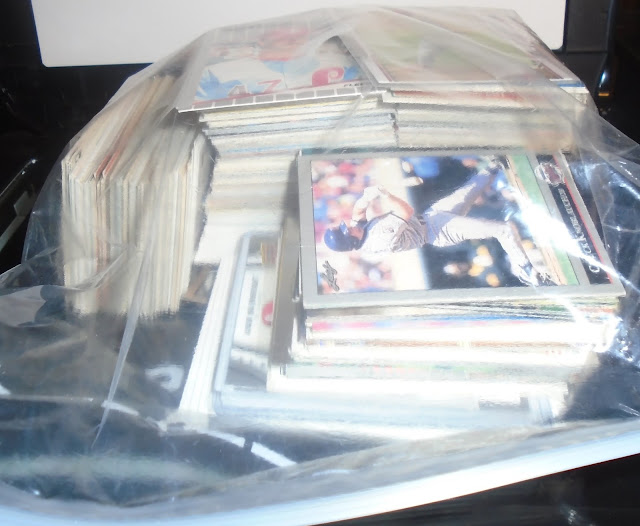 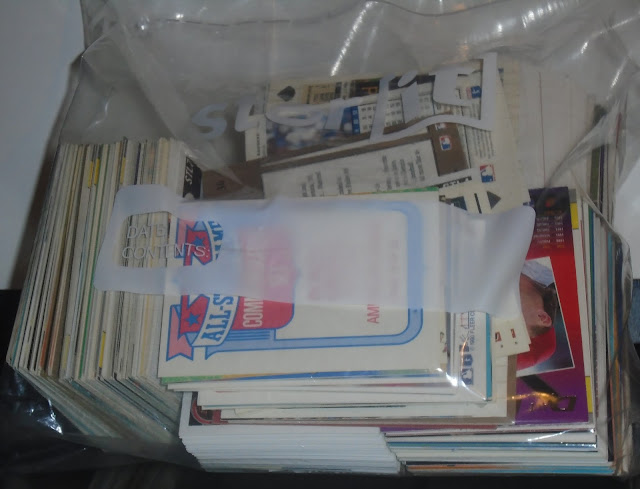 Not bad for 6 bucks.  So let's begin.  We start with a set that I don't see much, but when I do my interest is pretty high.  They may not be Royals cards, but when I find team sets like these of any team, I will spend time looking at them. 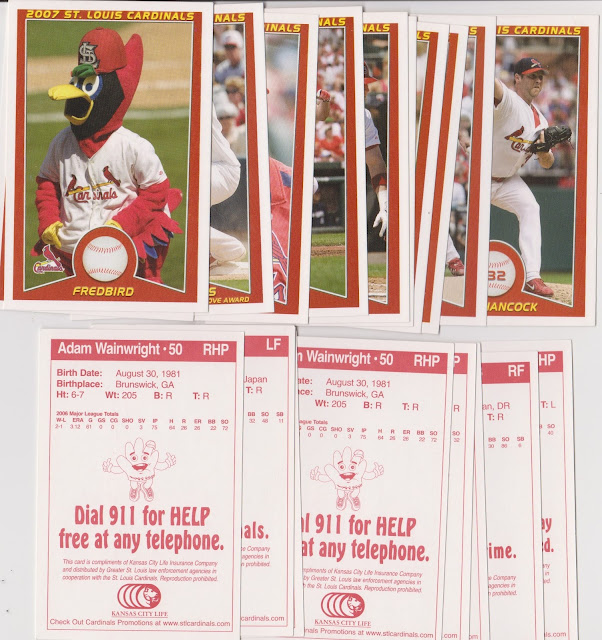 You can never go wrong with Kansas City Life sets.  Sure they may be oversize and thin card stock, but they remind me of being a kid again.  Oddly enough, I don't remember having any of these as a kid.  Anyways, I checked to see how many was in the set, and while there were quite a few doubles, there were some omissions.  I figured since these were somebodies collection they probably kept the good ones and got rid of the rest. 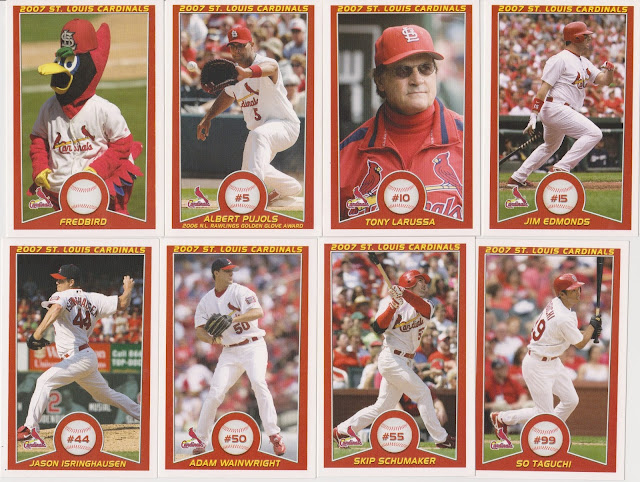 I would be wrong.  The biggest omission I saw was the Yadier Molina.  Out of I think 27 cards, I ended up with 23, and probably another 15 or so doubles, and even a couple triples.  My biggest surprise was seeing the Albert Pujols, as I am still a fan of his, and I can add it to my PC I have of his.  The question now is do I try to finish the set, or piece it out (i.e. move the Pujols to the PC).  I think I want to finish it, so that means the extra AP card might not go to my friend like I originally planned.  However, I do have a bonus Fredbird, so that will be his.

Among other big names were Tony LaRussa, Jim Edmonds, Jason Isringhausen, and Skip Schumaker (well, he was big at the time in St. Louis).  Also is Adam Wainwright, a name you might want to remember this week, as this is nowhere near the last we hear of him.  Lastly, while he might not have made it big, I was a big fan of So Taguchi, so I was happy to see a card of his.  I don't know what it was, but I always liked him. 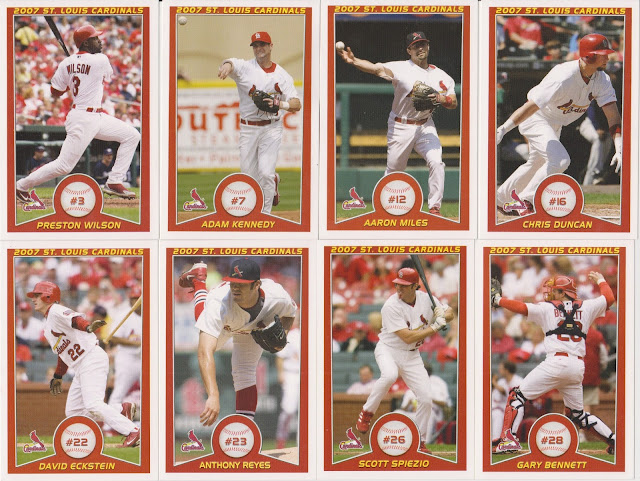 Here is the rest of the cards, among them include Preston Wilson (who I forgot was a Cardinal), Adam Kennedy (who I always confuse with Josh Hancock), Aaron Miles (who I don't confuse with anybody, mainly because I only remember his name), Chris Duncan (who I remember because he doesn't have a girl's name like his brother Shelley), David Eckstein (who I remember as being like 4 foot tall), and the other guys who I don't remember or can't think of anything they did in a Cardinals uniform.  I do like the black cap that Anthony Reyes is sporting though. 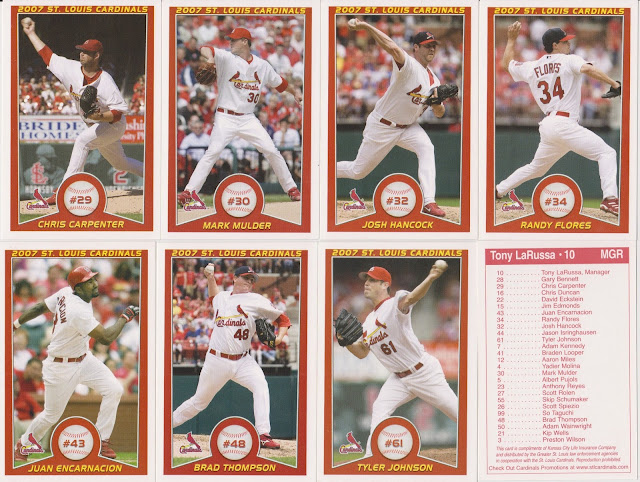 Here is the remainder of the cards I have from the set and also the back of the LaRussa card showing the complete set.  I think the four I'm missing is Yadi, Kip Wells, Scott Rolen, and Braden Looper.  I really think if I searched hard enough I could find them.  This batch includes Chris Carpenter (not to be confused with former Cardinals pitcher Cris Carpenter), Mark Mulder (who to my knowledge never called a game with Vin Scully), Josh Hancock (who is the pitcher that was killed in 2007 after it was determined he was texting while drive and also under the influence and nearly double the legal limit of alcohol in his system, which was he second wreck in three days), Juan Encarnacion (who I liked just because I liked saying his name), and the rest.  I remember seeing Flores, Thompson, and Johnson pitching on TV with the Cards, but none of their appearances stand out.  I do seem to remember that a lot of Cards fans I knew weren't too fond of Flores though.

So one near complete set and an oddball at that, its possible I would have paid two or three bucks for them alone, so for a six buck bag, I'm almost halfway paid for and not even 10% of the way through yet.

After this set, I found another set, that after further inspection, WAS a complete set. 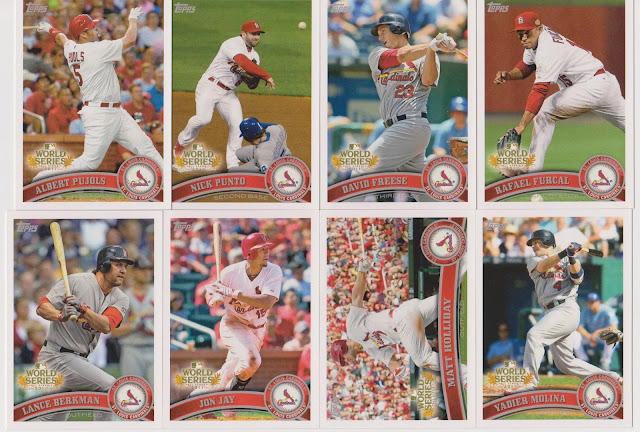 I loved the design of these Topps cards, but never had the World Series cards as shown.  When I first saw these I didn't expect a complete set, but once I put them in order, I saw what I had.  Of course just having the Pujols and David Freese cards were enough for me, but I'll take the whole set.  No doubles this time around, but still a good grab.  I remember the 2011 Series, and how much hate I got for it. At the time Ian Kinsler was a Texas Ranger and being a Mizzou alum, I fully supported him.  So I must have been about the only person in Mid Missouri rooting for the Rangers to win.  The bonus for me was having a plastic helmet that I bought at a Royals game in 1994 of the Rangers.  It was a full size one (but not like a authentic, more of a cheap version).  I bought it back then I think on a dare from a friend because the Royals played the Rangers that day.  Anyways nearly 20 years later I got to put the helmet to good use and wore it and even made it my profile pic on Facebook throughout the series.  I got a lot of crap for it when the Cardinals won, and while I really wanted Texas to win, I was just happy it was a good series.  It was during the height of my days of hating the Cardinals, since then, I've softened up quite a bit. 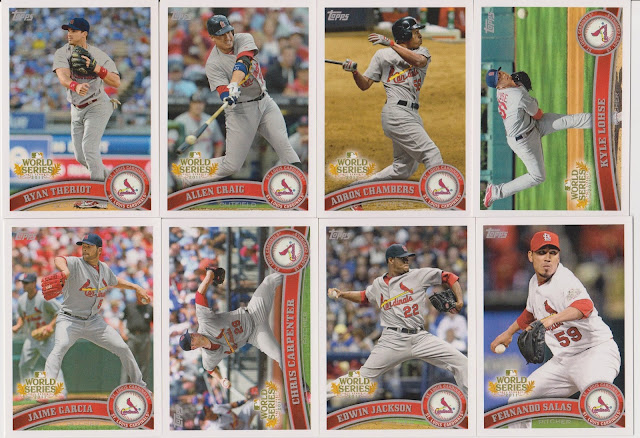 Here are some more cards, the highlight to me is the Jaime Garcia.  I've always been a fan of his, and while I don't have a PC started for him, I do have a few of his cards.  I remember some of my friends liking Fernando Salas quite a bit, and they loved Chris Carpenter.  They also grew to love Allen Craig too, though I bet not too many would card if he came back to the Cardinals now.  To this day, I still have trouble pronouncing Ryan Theriot's name, as I always want to make the "TH" sound to pronounce it and it throws me off.  Oh well, I shouldn't have to worry too much pronouncing it now, its not like I see his name everyday. 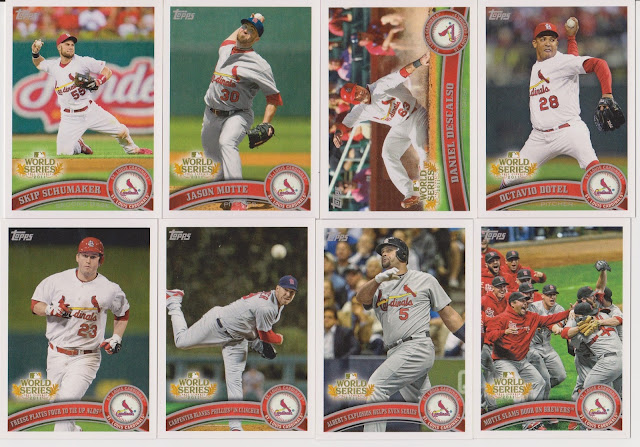 Here is the rest of the cards, including the actual World Series games themselves.  I must admit even though I rooted against them, I do like the last card quite a bit.  I also like the Schumaker on his knees making the throw.

Oops, I forgot these last three.  I remember during the Series even though I was Rangers all the way, I still would makes comments about how my relative was doing a great job in the Series.  It got to a point where some people even believed me.  David Freese is not my relative, as far as I know at least, as we spell our names different and my name is pronounced harder (mine rhymes with cease, not breeze).  I do know a few people around here that do have the same spelling as his name, so they could be related.  I really wished he would have made a bigger splash in the major's after this series, but I'm sure he was just happy being in the spotlight like he was for this Series.

So I'll stop there for tonight's post, one complete set, and another near complete set, I'm off to a great start.  When I say start, I haven't even scratched the surface of what is in the bag.  While these may bet some of the best of the best, I promise I still have some great cards to showcase.  Tomorrow will feature another near complete set, as well as another complete set, though this time it isn't the Cardinals.  It's not even baseball.  Think more along the lines of one of the biggest sports franchises in NFL history.  Beyond that, I'll have a few more scans to show, and then I'll need to scan more stuff.  I'm sure if I really wanted to, I could stretch this out two weeks, but I think one will be enough.  At the very least, I hope to have 5 straight days of posts, and might have 7.   By then I will have some other stuff to show off and I'll be looking at if I have a legitimate chance of surpassing last years post count.

Anyways, thanks for reading, and I hope you enjoyed this.  I know its weird seeing so many Cardinals cards on a Royals blog, but I expected as much since these came from St. Louis.  I do have a few Royals though, so I wasn't completely shut out.  Thanks for reading and have a great night.