Getting My Mac On

The other night there was a knock at the door.  I don't expect many visitors and wasn't sure who it was, but I answered it.  It was my friend who was just up the block waiting for a fireworks show to begin.  We talk to each other every day but haven't been face to face in over a month.  It's a bit sad since we only live about 6 blocks from each other.  He had some cards to give me, and I had some waiting for him.  We've talked about swapping them for a while, but never got around to it.  So he figured now was a good time.  Well, any time is the right time for cards, so we swapped them out, and he went back to wait for fireworks.  It took forever to start, but once it did it wasn't bad.  I didn't even have to leave my couch to watch them, so it was a double win for me.

Anyways, let's look at the cards he brought. 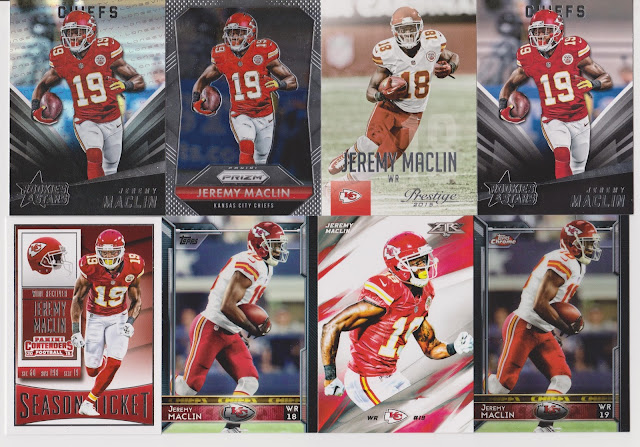 Until I bought one on COMC last month, I didn't have any Jeremy Maclin cards in a Chiefs jersey.  Around the same time that card arrived, my friend won an auction on EBay with a lot of doubles of Maclin.  So he wanted to give me some.  After seeing all these, I'm having second thoughts of moving my Mizzou collection into a box.  However, I just don't have room for more binders right now and while I have a binder free, I don't think all my Mizzou cards would fit back into it.  At any rate, I'm very happy to add these to my collection.  My favorite one I think is the Season Ticket card but the Topps card is a close second. 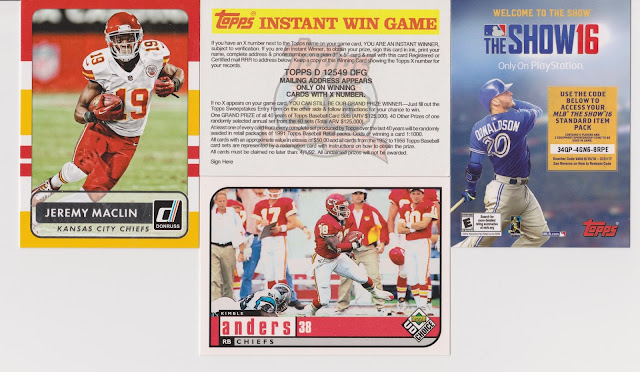 He also had another Maclin too in the collection, which I admit is nicer than the Topps card.  I like the gold border which is a nice touch.  Also included in the cards was an old Topps Instant Win Card, which I've never seen before, so that was pretty cool.

The Kimble Anders card was one I won off Listia.  It wasn't that I needed it, but it was cheap, and I don't think I had one of him, so I figured I'd bid.  The Playstation Code card I got in a pack of cards, I forgot from what, but I'm not going to use it, so anyone that wants to use it can.  I assume its a one time code, so first come first serve.

My friend had more cards for me as well. 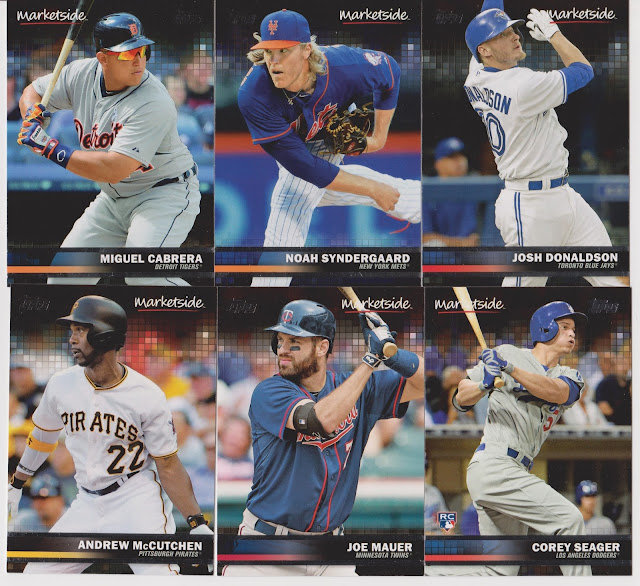 He mentioned that he got some breadsticks at Walmart and had some cards in them.  He named the cards and as luck would have it, I didn't have ANY of the ones he pulled.  He doesn't collect baseball much, so we worked out a trade, and now I'm inching closer to finishing the set.  This saved me a couple boxes of breadsticks thankfully because I'm getting a bit tired of eating them and the pizza.  I will still eat the pizza, but I wouldn't have bought as many as I have if I wasn't trying to get the cards. 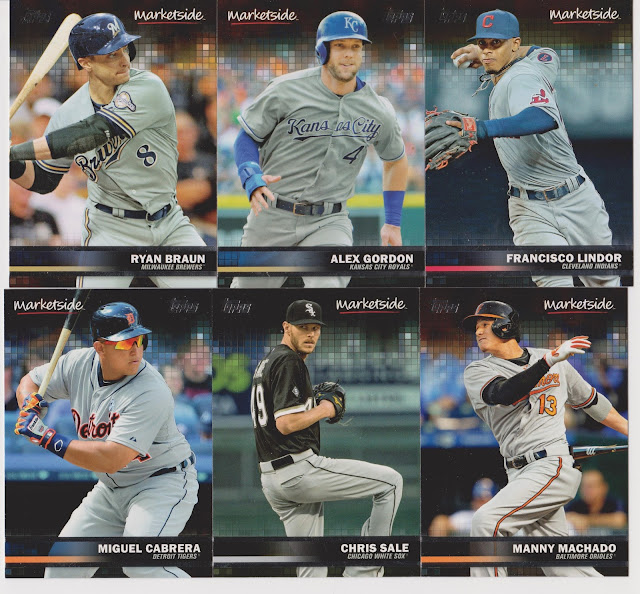 Well... I mean... Okay, I wanted to get a snack one day, and also grabbed a pizza.  The good news is the big pizza leaves enough for leftovers, so that works out great.  The other good news is I didn't have any of these cards either.  I got these before my friend dropped his cards off so now I have a double of Miggy, but that's fine, I still plan to keep it.  I think I am 11 short of finishing the set, so I might scour Ebay, Listia, and Trading Card Database to work on it.  If I don't I'm actually happy getting so close to completion.

Moving on a bit, I have been waiting anxiously for over a month for Sports Illustrated for Kids to come in the mail.  I signed up a while back along with a couple other magazines and they already arrived, but no SI for Kids.  So I checked my records and it turns out, I DIDN'T sign up for it (I use a site called Reward Survey to get free magazines).  So I went back to the site, and luckily they still had it and I signed up.  It's been about a year or two since I last had it, and while I didn't miss it much, I did miss the cards inside.  At the least I would find one card I liked each month, and since I could get it for free, why not?

It finally came the other day, and here are what the cards were. 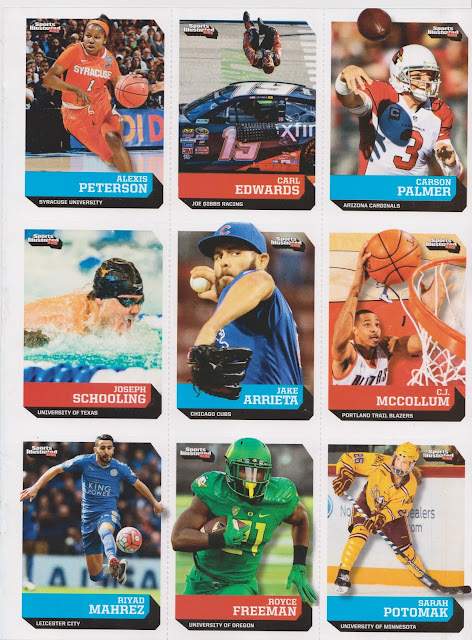 A Carl Edwards card right out the gate is nice.  I can add it to my Mizzou collection which I hope to get more Edwards cards when the new set comes out later this month.  The other card I like is the Jake Arrieta which I don't have enough to start a PC, but I'll hold it back for now and possibly start one.  The rest don't do much for me, but I do like the variety.  I will likely give it to my friend for no other reason so he can start a collection for his son, who is still a bit young to be collecting, but this way if the cards get destroyed, no big loss.

I expect the next issue or two will have some sort of Olympic cards, at least I hope they do.  It would be nice to see a card of J'Den Cox, but I'm sure I'll find at least a couple good ones. 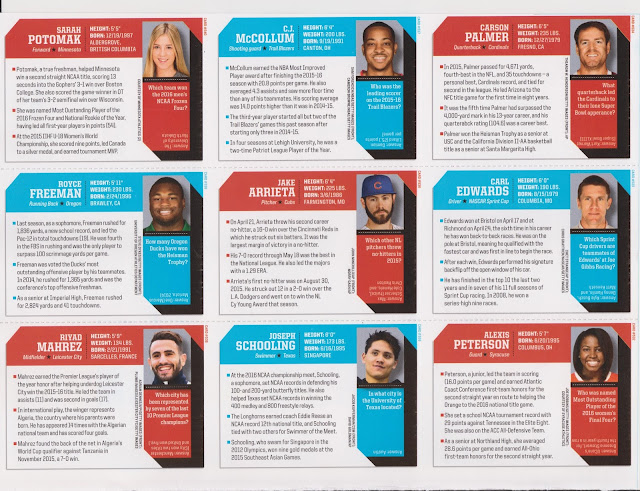 It makes me sad to see so many athletes younger than me now, but its a part of growing old.  I'm showing the backs because I plan to add these cards to the Trading Card Database (if not already added) and needed the backs anyways.  I wasn't aware Arrieta was from Farmington, MO, which means now I can include him in my Missouri (not Mizzou) collection, which is basically people that have ties to Missouri that doesn't necessarily include Mizzou, or the major sports teams.  The stuff you learn through Sports Illustrated for Kids.

Also in each issue is a double sided poster.  The tough part is scanning them, but I think you'll get the idea. 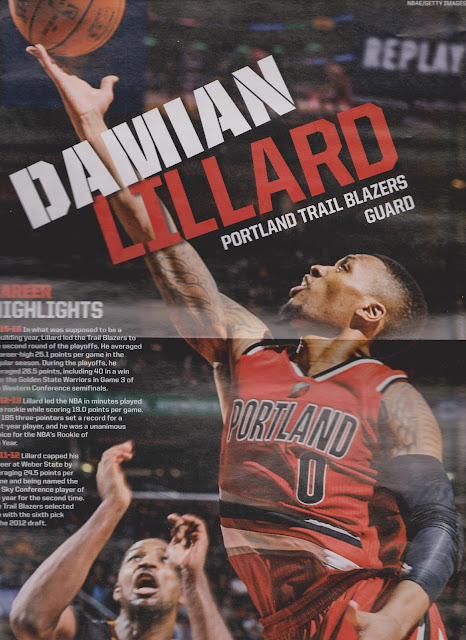 Nice one of Damien Lillard.  I think the only full game of NBA I watched this year included the Trail Blazers.  They were taking on the Lakers.  Next year I might spend a bit more time watching the NBA, but I won't promise anything.  Last night I wanted to do a rant on the Kevin Durant signing with the Warriors, but decided just to take a night off.  Basically my view is sports are a business (sad but true), and like any business, your goal as a player is career advancement.  Durant felt his best shot at winning a ring was with Golden State, so he signed with them.  I'm not much of a fan of the Warriors, Durant, the Thunder, or anyone really involved, but I don't get the uproar over it.  I understand Thunder fans feeling mad, but everyone else (including Stephen A. Smith) should just accept it and move on.  I don't see it any different than LeBron leaving Cleveland.  Some argue it is different, but I just don't see it.  The Warriors want to keep winning, and last year they didn't so they went out and got a piece that should (for their sake) hopefully win another title or two.

Sorry for the ranting, just wanted to clear my head.  Anyways, let's see the other side of the poster. 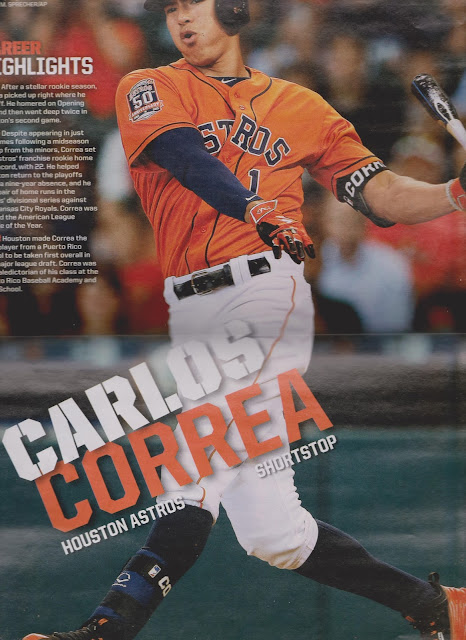 The poster doesn't cut off Carlos Correa's head, I just didn't place it right to be scanned.  To be honest, if I ever decided to display this poster, I'm not sure which side I would show.  I love MLB more than NBA, but I kind of like Lillard more than Correa at this point. I'm thinking about giving it to my friend, but I'm not sure yet.  Maybe his son will become a big baseball or basketball fan because of this poster. His mom and dad already have him pretty well trained on football.  Too bad this town doesn't have a football team.

So that will wrap it up for today.  This is being posted a bit earlier than normal because I took off yesterday and my page views dipped.  I was averaging over 100 and last check had 28, so I needed a bit of a boost.  It resets in 3 hours or so, so I thought I'd get a jump on it. I do want to move my posts up earlier, so we'll see what happens.  At any rate, thanks for reading, and have a great night.  At least this gives me more time to check out Daredevil, which I haven't been into much yet.  I'm at episode 5 so I still have a bit more to go, maybe it will pick up.