First Pitch and some Series Two

"I wish to apologize to anyone I may have disappointed."  That is how Ryan Bruan's apology started when he got caught taking PED's.  Today, I want to apologize as well.  I cheated, and I'm sorry if I disappointed anyone.

How did I cheat you ask?  Well, its a bit embarrassing and I'd rather not discuss it, but if I'm going to move on from this incident, I must come clean.

I took the easy way out because I saw an opportunity.  I had a chance to maintain a high standard and I felt it was the simplest way possible.  However, I have to be honest, I don't regret what I did, and if I had to do it all over again, I would.  Sometimes the best and smartest way to do things are the simplest.  I'm not condoning anyone else to do it, but in this instance, it made a lot of sense.

CONFUSED?  AWW MAN, I HAD YOU ALL GOING DIDN'T I?  Why am I apologizing but not regretting it?  Well, its simple.  I didn't want to buy more boxes of cards in hopes of getting a complete set of insert cards.  So I took the easy way out.  It was also the cheapest way, and it allowed me to move on from a set I wanted to get. 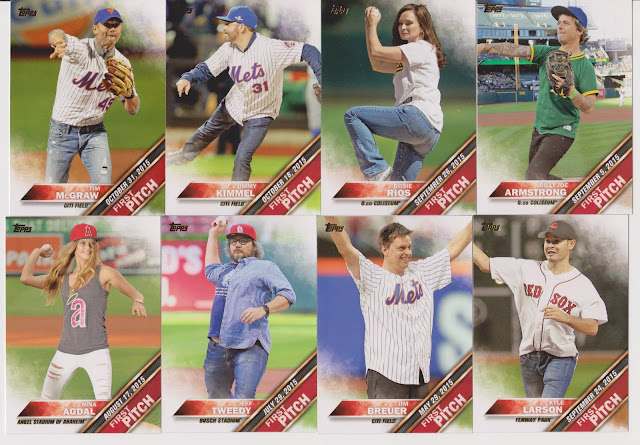 Topps released First Pitch Series Two cards and I was on EBay and found someone selling 16 of the 20 cards in one auction.  I figured I would bid on them and knock them out early if it stayed cheap.  I bid a bit more than I wanted too, but to be honest, it was still cheaper then what the Jordan Spieth card from Series One is going for on COMC.  So I got all but four of them and a couple days later I found an auction that included the other 4.  Sadly, that cost more than these 16, but it was still a good price, and I hope to be getting them in a week or so.  There are a lot of good cards in Series Two, and it starts off with Tim McGraw.  I've always liked Tim, from his earlier hits like Don't Take The Girl and Indian Outlaw, to more current ones like Diamond Rings and Old Bar Stools.  This was a nice card.  I was also happy to see Jimmy Kimmel and Billy Joe Armstrong included in the set.

The bottom row has my least favorite card of the set- the Nina Agdal one.  For some reason the card seems like shes standing in front of a green screen and doesn't look natural.  I have nothing against her, as I don't know who she is, but I think its just how the card was made.  Other cards in this set look much better.  I like that Jeff Tweedy got a card, and the same for Kyle Larson.

My favorite of the set is possibly the Jim Breuer.  I like his stand up, and if you haven't seen his impression of AC/DC, then you are missing out.  I liked him in the movie Half Baked, and even liked him on Saturday Night Live.  However the reason I like this card the most is because I know the he is a die hard Mets fan.  Last year I found a site on the Internet that let's you watch local news from all over the United States, and just happened to catch him on a New York station.  Scott Stanford (who works at the station as well as the WWE) was interviewing him, and Jim without missing a beat was talking about the strengths and weaknesses of the team and things that true fans would know.  After seeing that I admired him a little bit more.  Most people use these First Pitch opportunities as a chance for promotion, but some are genuine fans and you can tell. 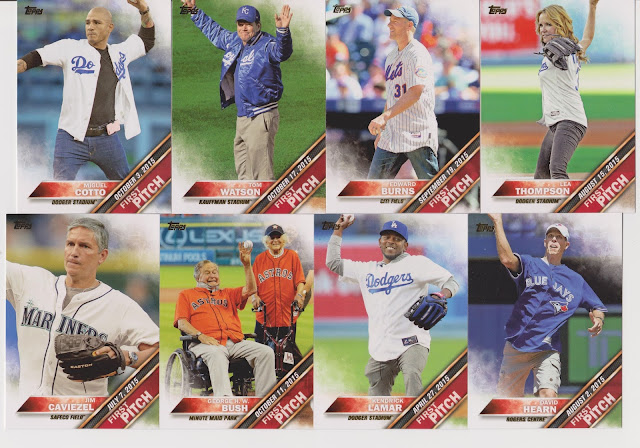 Remember the package that went all around the Central States I mentioned last week?  This is what I was waiting for.  So I was pretty excited when I finally got them.  Here are the rest of the cards, and I was really happy to get the Tom Watson card.  I'll still look for another one to put into my Royals collection, but I'm more happy that the Royals got a card in the set.  My wish for next year would be that every team will have at least one card among the cards they release next year.  I don't know if they did this year, but I think all teams should have at least one.

The names in this batch don't appeal to me as much as the first batch, but Lea Thompson still looks good, and I'm glad to have that card.  I am also happy I got the Edward Burns card, I like some of the stuff he does.  The one I like the most in this batch though is the George H.W. Bush card.  Not getting political here, but it is nice to see a former President included in the set.

When I opened the package I was a bit surprised though.  The seller packaged it very nice in a bubble mailer, but he also put them in a plastic case, one that I've never seen that small. It's not uncommon, its just I never saw one before, the small I had I think held about 40 or 50. 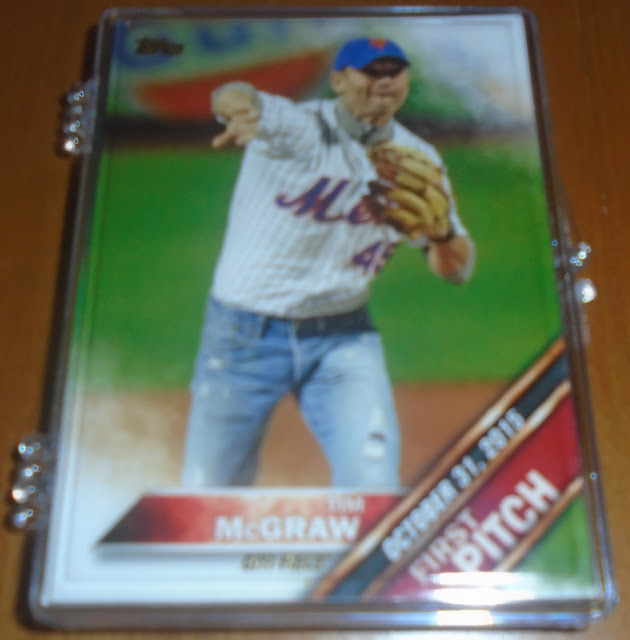 This one fit all 16 of these card in there pretty snug, so I'd imagine it fits 15-20, leaning more to the 15 though.  It will come in handy though as there are times if I know I'm going somewhere and think I have a chance of meeting someone and I have their card, I can put it in here and keep it safe.  That alone made this a great deal.

So I only need four more cards to finish Series Two, and like I said, I should be getting them in the mail soon.  As for Series One, well, I still have about half left to get.  I'm knocking them out a little at a time on COMC, and might even make an order on Sportlots one day (I've never used the site, but hear great things).

In addition to getting these, I also bought a pack of Series Two cards, using one of many coupons I have left.  I never thought I'd still have so many coupons, but I know I won't be using them all at this point. 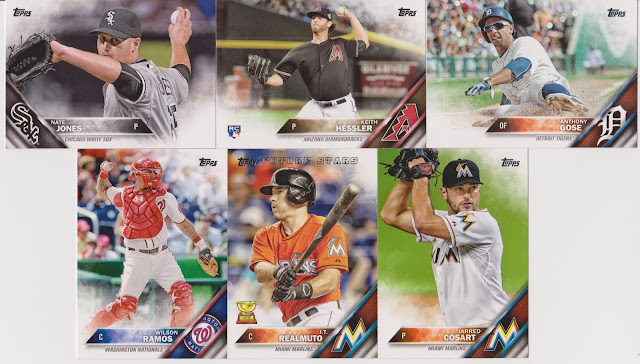 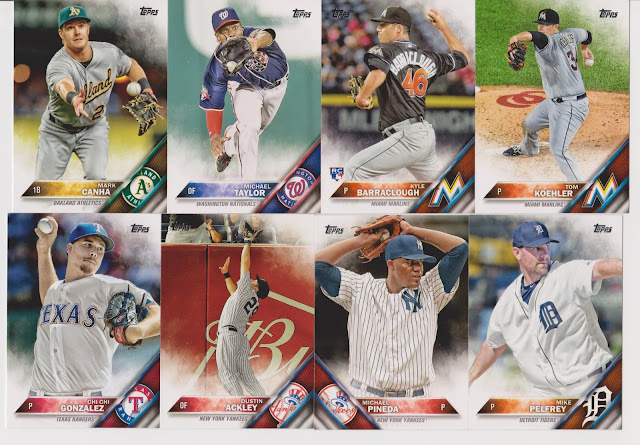 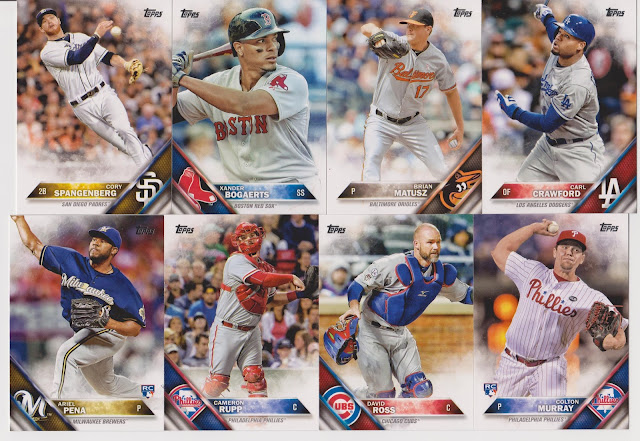 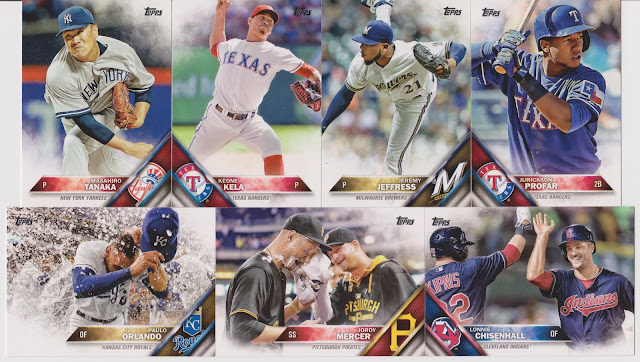 Not much to say about these.  Since it was my first pack of the second series, I needed all of them.  I really like the Paulo Orlando card and not just because its a Royals card.  Jeremy Jefress sounded familiar so I looked on the back and I had suspicion and I was correct.  He had a previous stint with Milwaukee, though he was traded to Kansas City a few years ago in one of the Royals most pivotal trades in recent team history.  At the time I hated the trade, I was mad for months.  HOW COULD THE ROYALS TRADE ZACK GREINKE TO MILWAUKEE FOR NOBODIES???  The Royals sent Zack Greinke and Yuniesky Betancourt (THEY TRADED YUNI TOO?  OMG!) for four guys.  One of them was Jeremy Jefress.  Another one was later traded in another one of the Royals pivotal trades in recent team history- Jake Odorizzi.  Jake was later involved in the trade with Tampa that netted James Shields and Wade Davies.  The other two players the Royals got?  Some outfielder named Lorenzo Cain, and a shortstop named Alcides Escobar.  It wasn't until about two years ago that I finally got over the Royals trading away Zack (who demanded to be traded to a contender), but I will be the first to admit I was wrong about that trade.  That was a brilliant trade that I never would have suspected would work out for KC so well.  On the flip side, I was one of the few that praised the Shields/Davis trade that sent Wil Meyers and Odorizzi packing to the worst playing field in Major League Baseball from day one.

Anyways, this pack also had some inserts included obviously, so lets take a look at those. 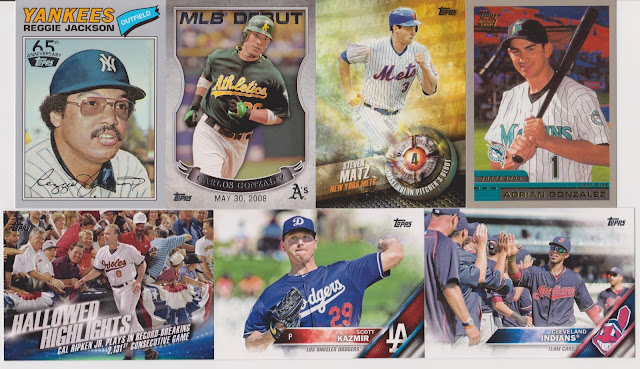 Reggie Jackson?  Mr. October?  Very nice! I can't complaining about that one.  A new MLB Debut card this of Carlos Gonzalez.  I seriously doubt I work on the series two set since I don't even have half of series one done yet, but who knows maybe I can find some on Ebay.  A Berger's Best card of Adrian Gonzalez, which I like because I liked the 2000 design.  Finally I got a nice Cal Ripken Jr. card, which will look nice in my collection.

Overall not a bad pack, but nothing to really write home about.  I'm not sure what to expect from the series two cards those, so I don't think I'll be as aggressive in collecting them, but I might get a pack here or there.

So that wraps it up for today, I'm back to around my normal time in posting as it is easier for me to post it at this time and it gives me time to come up with topics and time to scan.  I might do some earlier in the day occasionally if I have random thoughts or something I can't wait to post, but otherwise, I like when I post in the evening better.  Thanks for reading and have a great night.