I had to make a quick pit stop at Dollar Tree for a couple items and since it had been a while, I decided to get 3 repacks.  They were all mixed packs this time, but mostly were baseball cards.  I also made a couple other stops recently and got a couple packs of Series Two Topps, so I figured today I'd show them off.

We'll start with the Topps packs. 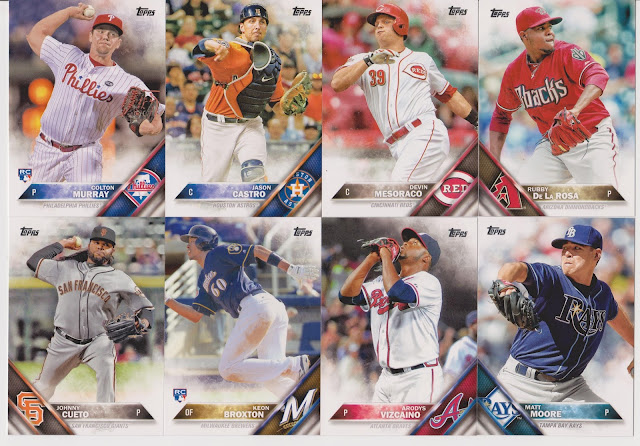 I was really gung ho on series one, but haven't gotten much of series two.  I haven't gotten any of the Update but if my local Casey's gets Update I'll get a pack.  The only one I really like in this batch is the Johnny Cuerto, which I can add to my one time Royals collection. 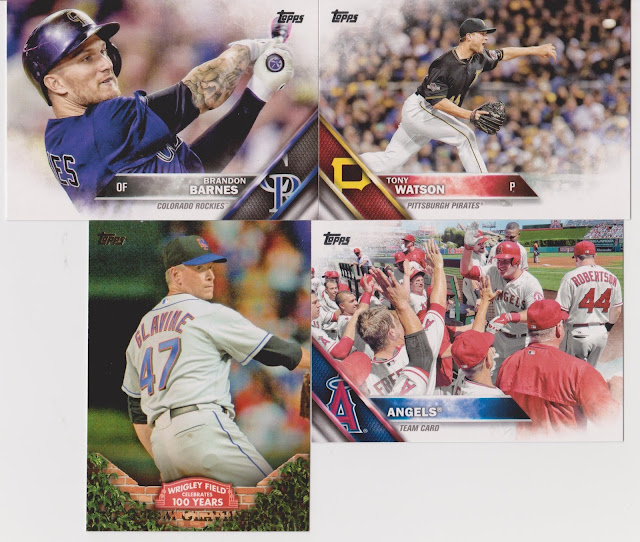 The rest of the cards in the pack.  I always find the Angels team cards odd since they put no city.  The Glavine card isn't bad but the foil on his name is messed up.  I also don't get having non Mets on the Cubs set. 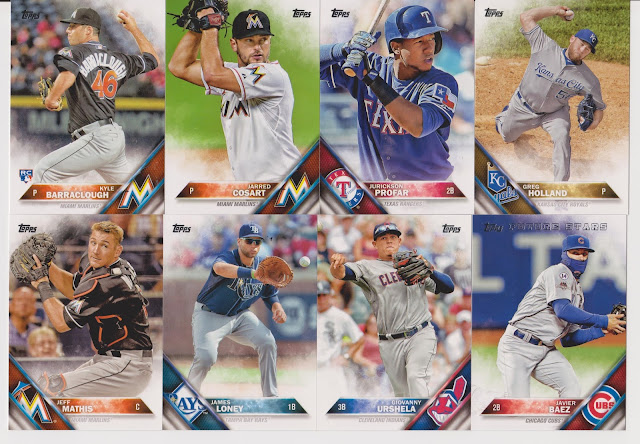 The other pack had a Greg Holland which I didn't have, and I'm also glad I got the Javier Baez and Jurickson Profar cards.  This pack was much better. 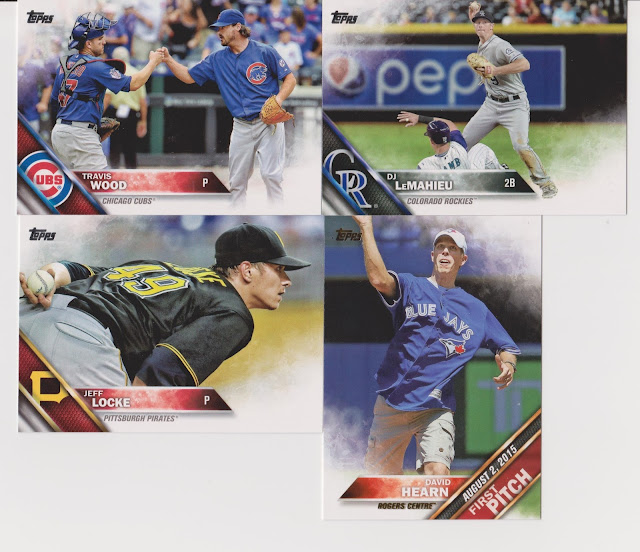 I got a First Pitch card, which I actually already have.  When the second series came out I found the entire set on ebay and got them.  I expected the cards to be hot sellers and making it tougher to get, but they really weren't.  I'm still looking for a couple for series one, including the Jordan Spieth, which I plan to get Black Friday.

One more item to show before the repacks are the most recent SI For Kids cards, a few good ones this time. 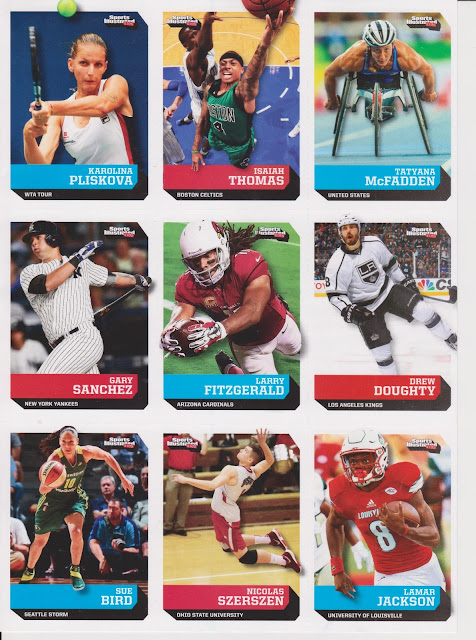 Being a somewhat fan of Louisville Cardinals, I was happy to see the Lamar Jackson card.  I can put it next to the Teddy Bridgewater SI for Kids card I have from a few years back.  I was also happy to see the Sue Bird since my WNBA collection isn't much.  Same goes for Tennis, which I wish I could watch more of.  I haven't watched as much since I lost the Tennis Channel and not caring as much.  I don't even know of Karolina Pliskova, but maybe I'll start watching again next year.  I think the Aussie Open is in January so I can pick it up then. 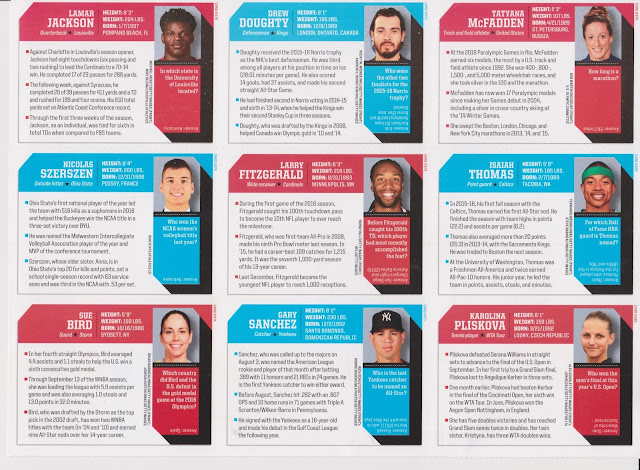 Here are the back of the cards.  I know it hasn't been too long but I wouldn't mind a redesign on the cards.

Okay, let's get to the repacks. 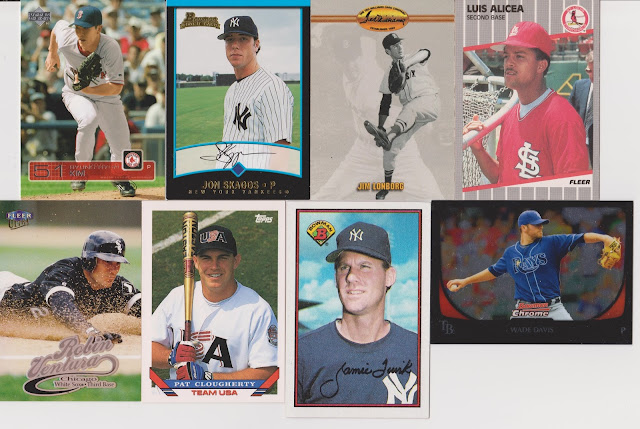 First pack wasn't a complete dud, but it wasn't the best.  I like that I got a pre-Royal Wade Davis card and a post Royal Jamie Quirk card.  The Ventura card is nice, as is the Kim card.  The Jim Lonborg was a nice one to pull too.  What I really liked though was this pack had more than a couple of the Team USA cards included.  No Nomar but I don't remember having many of these so it was cool to pull. 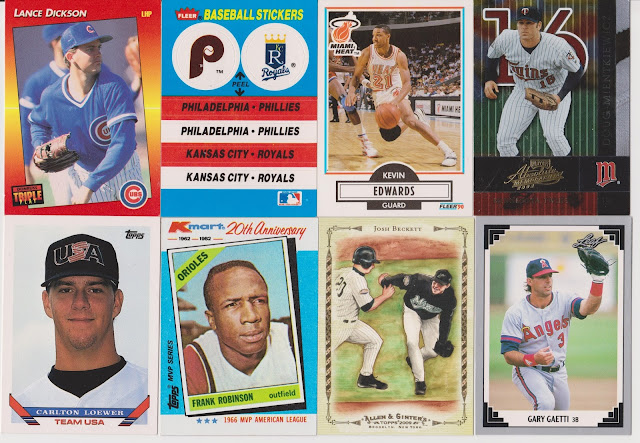 Pack tow had more variety.  I got it because of the Triple Play card that was shown on top.  I got a Royals sticker card, one I might not have at that, plus some other great cards.  More Team USA cards, a A&G card I kind of like, a Kmart card that I like, and another former Royal in Gaetti.

This pack had more cards to show too. 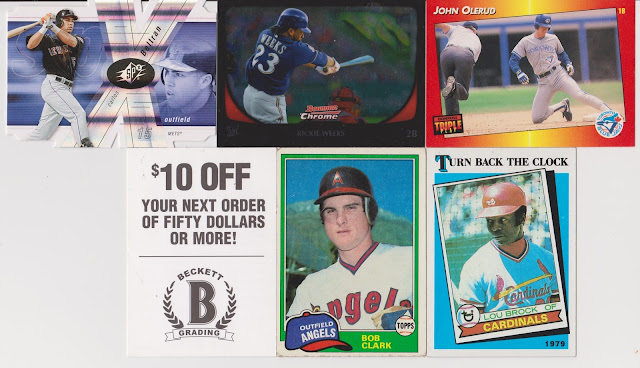 Another Triple Play card, and older card of Bob Clark, a flashback card of Lou Brock, and a Chrome card of Rickie Weeks, not to be confused with Wikileaks.  However, the best card in the pack by far is the Carlos Beltran card.  Sure its from his Mets days and not as a Royal, but I am slowly building a Beltran collection that one day could surpass the Johnny Damon collection I have.  On top of that I got a coupon for Beckett Grading... provided I use it by December 31st.... OF 2008!  I might have ran out of time on that one, but oh well, it was kind of cool to see and didn't count against the 30 cards in the pack so its all good. 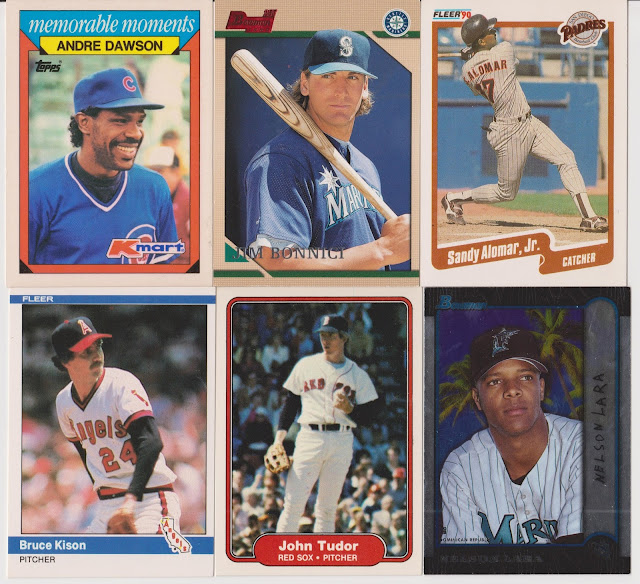 Final pack has another Kmart card, this was on top and the reason I got the pack.  It was nice to see the amount of Bowman in these packs to be honest since I don't really have a lot.  It also wouldn't be a Dollar Tree repack without an Alomar card, this time its Sandy.  Also got a couple older Fleer cards, I like the Kison because of the Angels logo, which honestly could still be used since they have no city listed.  The Tudor card is nice as well.  I think its from 1982 so their first couple years and not bad.  Too bad it wasn't an Ozzie Smith but oh well, its not like I don't have any cards of him from his Padres days. 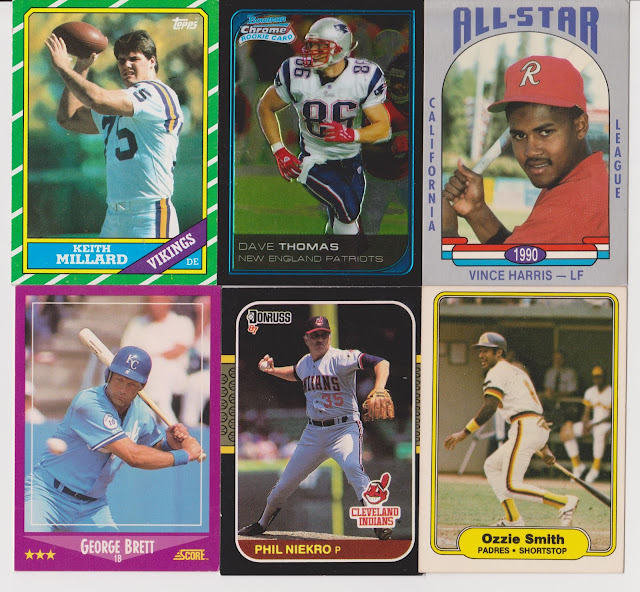 Here's the rest.... WAIT A MINUTE!  I ALSO GOT AN OZZIE SMITH FROM HIS PADRES DAYS!  I have a few of his Padres cards including a Rookie or second year card so it isn't uncommon, but it was really nice to pull one from a pack.  I was really excited and I know its not worth 3 bucks, but that card made it worth all three packs to me.

Besides the Ozzie, I also got a George Brett, which I think I have, but still love the powder blue uniforms.  I also got a Phil Niekro which I don't think I had, so it was nice to get.  On the top is a Vince Harris card which smells of minor league, and that's why I love it.  I also got a couple football ones, which there is a good chance I already have the Keith Millard card, it looks familiar.  However I had no idea the founder of Wendy's played football.  It was cool to pull the Dave Thomas even though I never heard of him.

All in all the Ozzie Smith and Carlos Beltran cards made the packs worth it alone, and none of the packs had doubles so that was good.  A nice mixed variety, so I can't complain.  I might get another pack or two next time I go, but I don't plan on going for a while.

So that wraps it up for tonight.  I hope to have at least 3 blogs up this week, including one from a recent contest win, and possibly some Listia wins as well.  I might even have a couple others planned, it depends on how I feel.  I hope you enjoyed reading, and hope everyone has a great week.