Final World Series post and some wins to showcase

The World Series is over, and as I stated on my Facebook and Twitter, while I hoped for a different result, I can't complain about the game.  Since I don't want to rewrite everything I wrote after the game, here is a screenshot from my facebook. 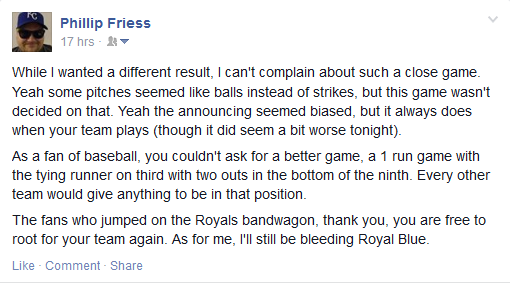 As a result of watching the World Series, I've fell behind on a lot of things.  I still have some packages I need to finish getting together and sending out (Julie is first on my list since she kindly sent me a package I will show off soon).  I also fell behind on my catalogging and hopefully I will start doing that again soon.  I'm thinking I will on Sunday or so since I have a busy next few days.  Since I haven't been catalogging and still bidding on stuff on Listia, I got a couple wins in the mail that now I'm not sure I needed.  Well one of them I knew I needed but the other was so cheap I couldn't pass it up.  I will show them off today. 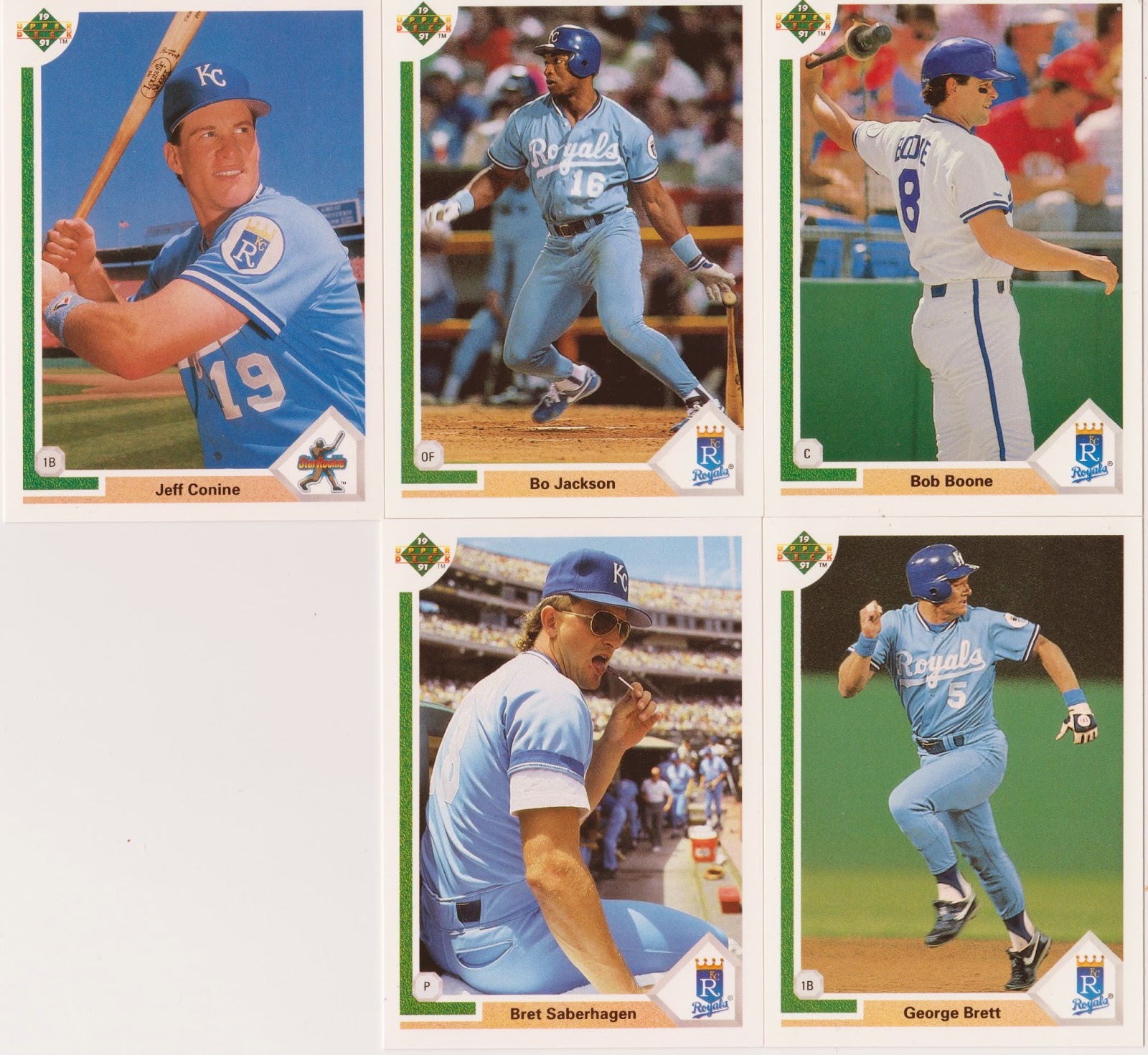 First is the complete team set of 1991 Upper Deck.  I think its complete, the auction said it was, and I can't argue because I didn't look to see (another reason I need to finish catalogging). Anyways, I decided not to scan all the cards, but just a few.  Of course I needed to include Mr. Royal, George Brett.  I also showed off the Bo Jackson because I like how he looks in the powder blues.  I liked Jeff Conine growing up, so I decided to scan his card.  The Bret Saberhagen card made me laugh for some reason.  I think its the shades.  I threw in the Bob Boone card for only one reason.  Is that the Marlins fan in the background?  I know the Marlins wasn't even a team in 1991, but that dude is everywhere!  It's not crazy to think he would show up on a baseball card wearing team colors for a team that didn't exist and didn't even use red as a team color until just recently.

I guess its a spring training game against the Cardinals but its cool to think its Marlins Man. 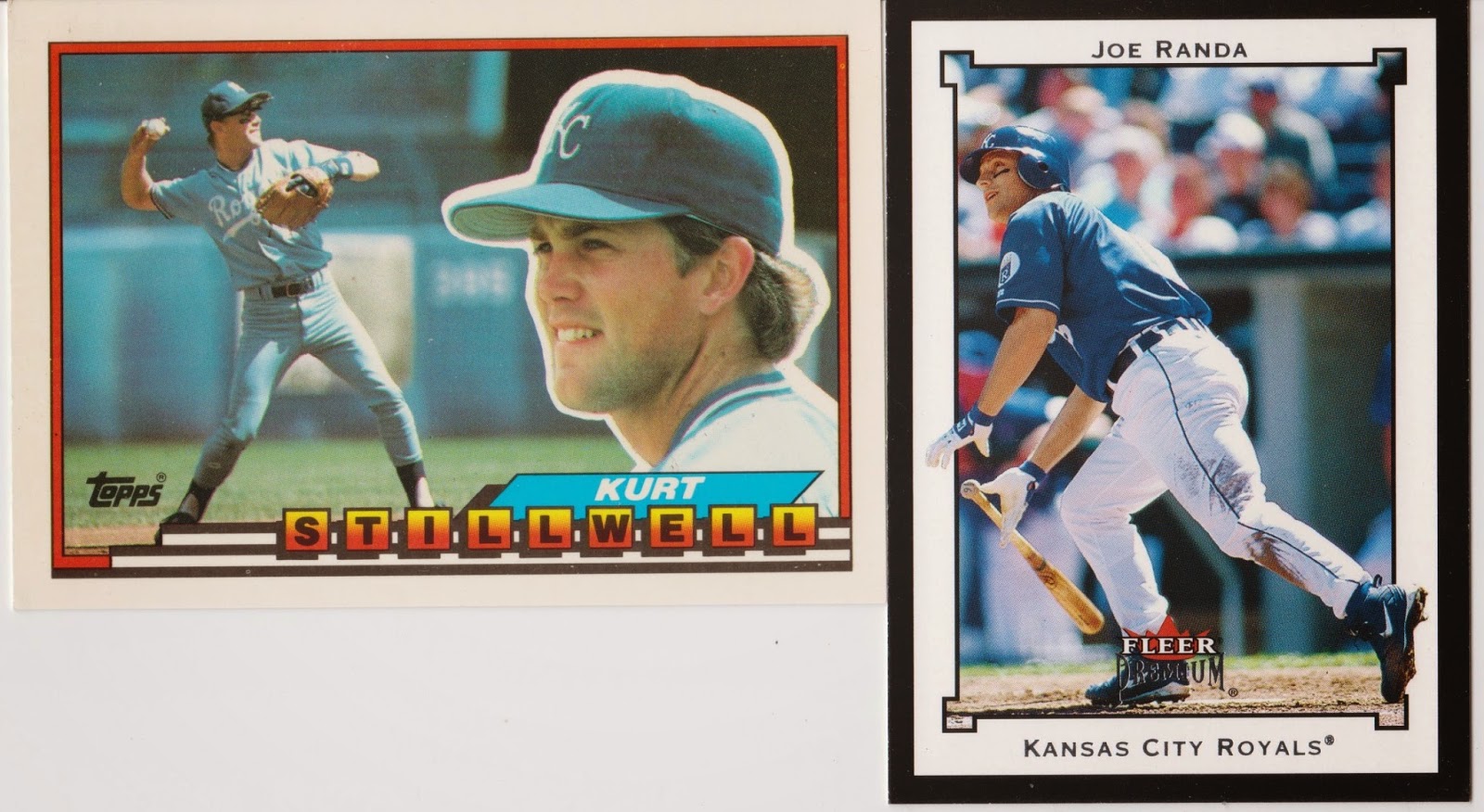 Next up was an interesting package.  Not interesting like a bomb squad had to be called in, but interesting because of the cards I got.  I won an auction for a Joe Randa card, one which I knew I didn't have.  When I opened the package I saw the Joe Randa card seen in the photo above.  It also included the Kurt Stillwell card pictured.  I am not the biggest fan of the Topps Bigs cards or whatever they are called, but it was nice to get this card, and I have a few, so I guess I should work on finishing the team set at some point, but not in a real rush.

I also got these cards too.  Another Joe Randa, which is another one I needed, and it reminded me how much I liked the design of this set.  The Davies card I'm not sure if I had, I seemed to have a lot of cards from that year, on of the better ones in recent years. The Jim Eisenreich card is one I don't think I have, but I need to check.

After looking at the cards I had to log onto Listia to see if it mentioned bonus cards.  It didn't so this was a nice surprise. This is the second time I've won an auction on Listia that the seller threw in bonus cards.  I can't complain about that.  I have a couple more pacakges I should be getting soon, and also have quite a few auctions I'm watching, so I should be winning more cards soon.

Another reason I got backed up on sorting my cards is because I've been going through some stuff and yesterday I came across some cards I forgot about.

I guess they are called cards, some might call them discs.  I just know I'm not quite sure how to display them.  I'd like to put them in a binder, but don't think I have sleeves to fit them in.

The Taystee ones are similar to the Bo Jackson one I scanned a while back (I think I showed it off, I know I scanned it).  I would imagine with Bo, Brett, Frank, and Bret (this one with only one t) that this set could be near completion.  They were part of my dad's collection (as is most of my older cards since I sold my collection in 2004).  Looking at these, it would be cool to use these to make a Royals display and these could be an outline, almost how they have lights outlining a movie poster.  I might have to find some more and create a project.

The last one isn't a Taystee one, but Kitty Clover.  I'm not even sure what that is, but its cool to have.  It's the only one I have, but I should look into if they made more.

That will wrap it up for today, but hope to have more posts the next few days.  I have another set of cards I found, and also the aforementioned package from Julie, plus since the baseball season is over, I will start showing more Mizzou stuff.  Since I plan on going to the football game Saturday, I am starting to get pumped for football finally (though I know its half over).  The Mizzou basketball team had an exhibition last night, so I'll be posting about them soon too.