In The Air Tonight

What better way to prepare for tonight's game seven then some Nonpoint?  Sure, I could have gone with Phil Collins, but I really like this version.  Sorry about skipping last night, I got sidetracked and by the time I had time, the game started.  Though I found some stuff yesterday that I am going to post now.  What I really wanted to post I couldn't find, but once I do, I will show it off.  In the meantime, here's what I did find. 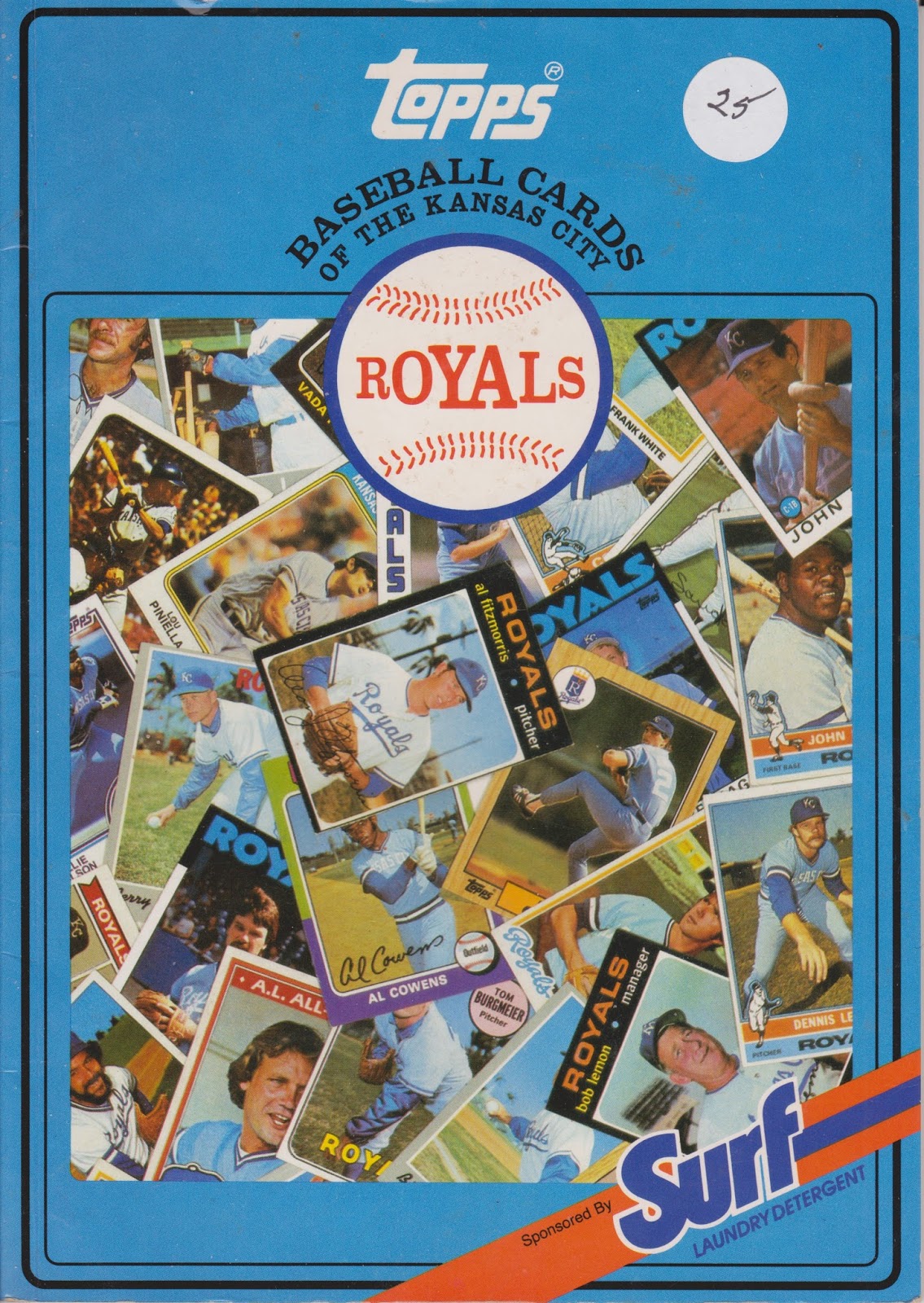 I bought this book for a quarter (as the tag implies) a couple years ago at a second hand store.  It was cool because it showed all the Topps cards of the Royals from their first year until 1987, the time of publishing.  They made some for most of the other teams too.  I like how Surf sponsored these (or maybe just this one) books. 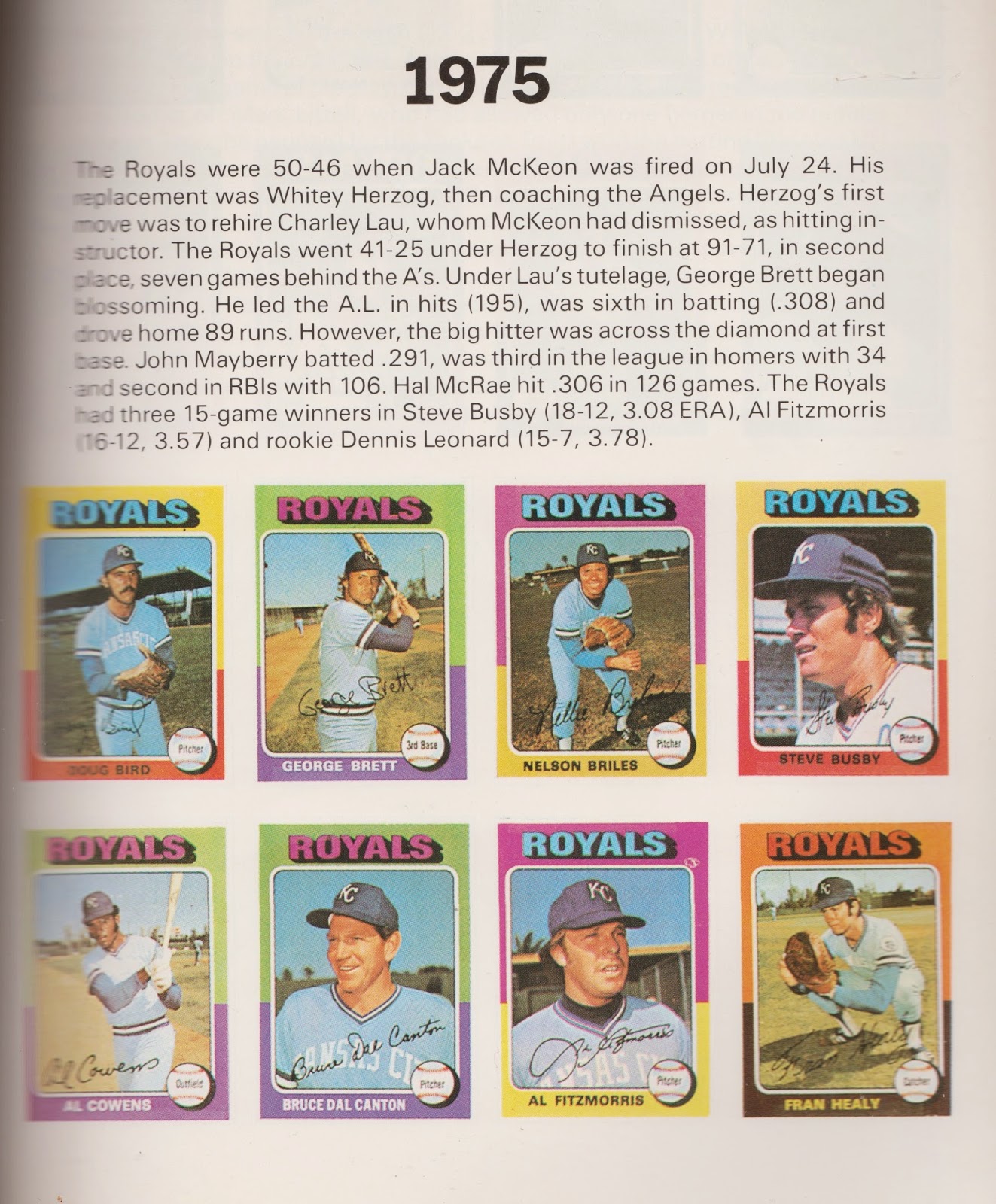 I HAVE A GEORGE BRETT ROOKIE!  Well, on paper I guess I do.  One day I will have the real deal in my hands, but for now, this will be good enough.

Aw yes, the 1985 cards.  The team that went all the way.  I'm still proud of them winning it all in 1985, but if for no other reason, I want the Royals to win tonight, just so I don't have to hear that brought up again.  To me the fact that they haven't won since 1985 isn't the tidbit that needs to be said.  It was the fact they hadn't made the PLAYOFFS since 1985 that was more important.  Anyways, I would love to see a new edition of these books made, but with all the inserts in the card sets, it would be too much.  Maybe if they just did the base sets, it could work.

I almost forgot, I made money on this book!  In the back of the book is a coupon saving 50 cents on Surf!  The best part?  NO EXPIRATION DATE!  It would be kind of cool to try using this (that is if they still make Surf), just to see the cashiers face, and the company when it is turned in.  Though since the book is in great condition, I have no intention of cutting it out.


I also found something else of interest from yesteryear to show off. 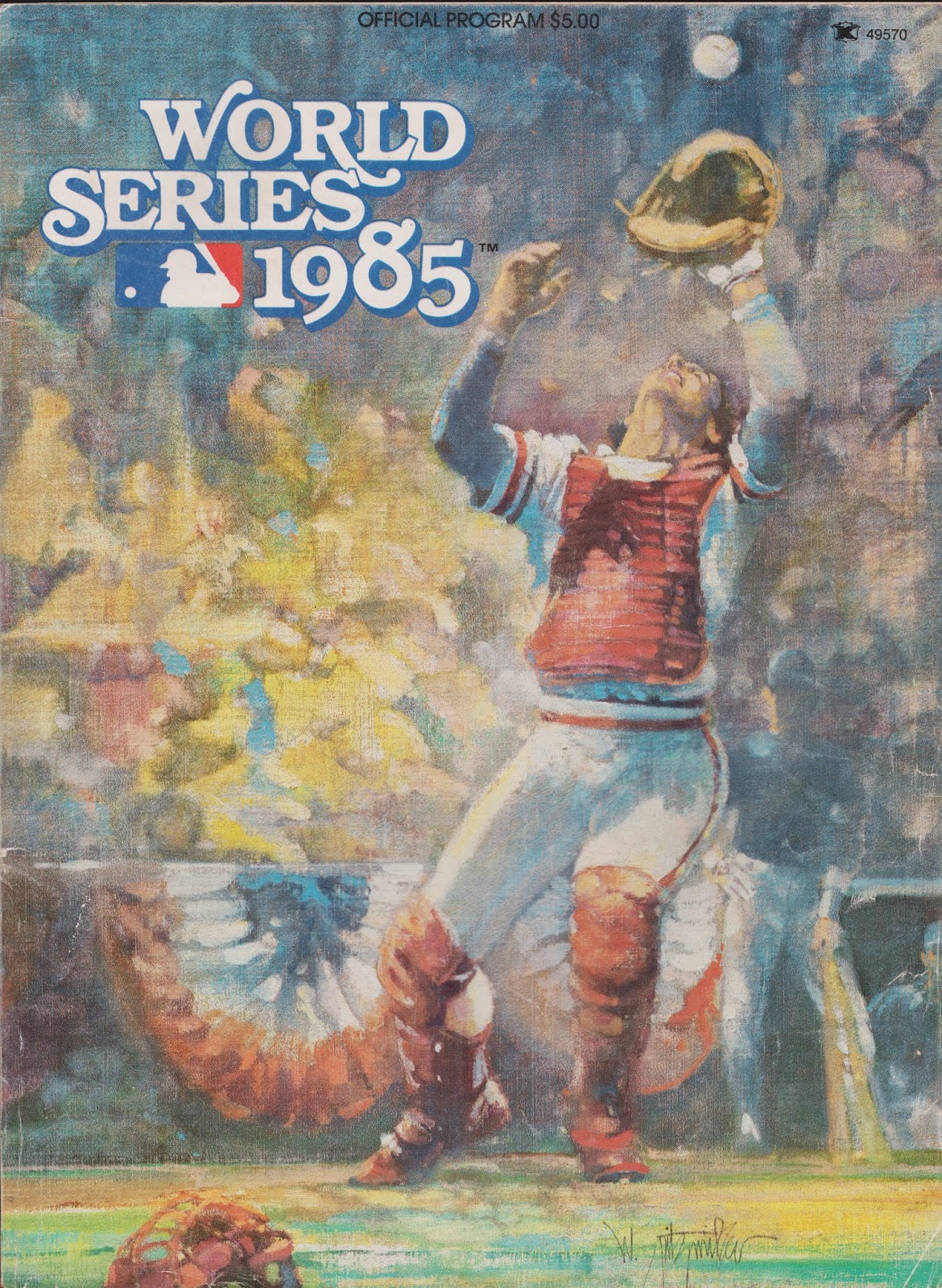 It's not like it was a holy grail item, but I finally found it.  It was tough to scan the inside, so next time I might just take pictures.  It is one of my favorite pieces I have, and hope to add ones from 1980 and 2014 to the collection.  I also want to get the ALCS, ALDS, and Wild Card ones too from this year.

Let's take a look inside! 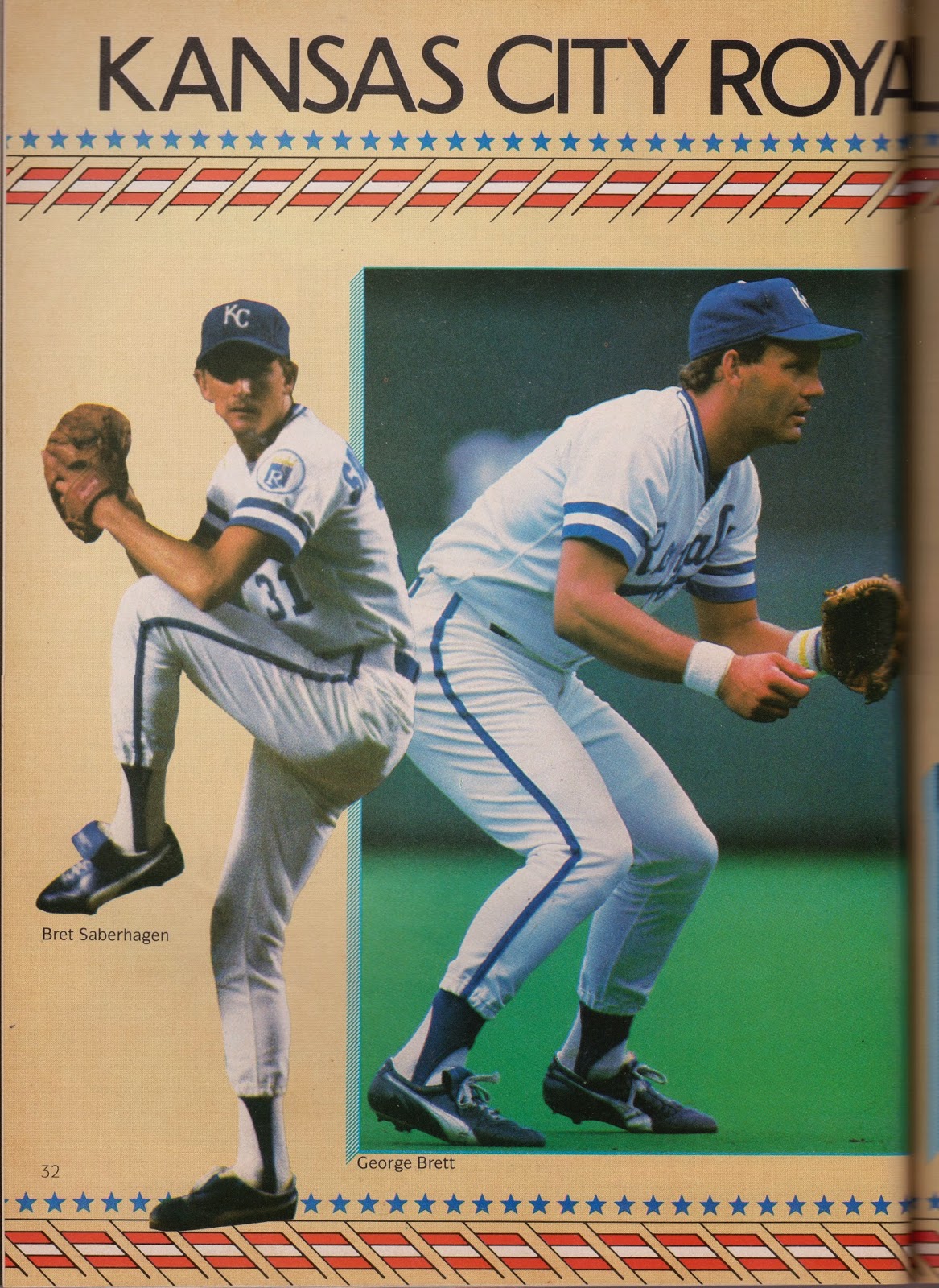 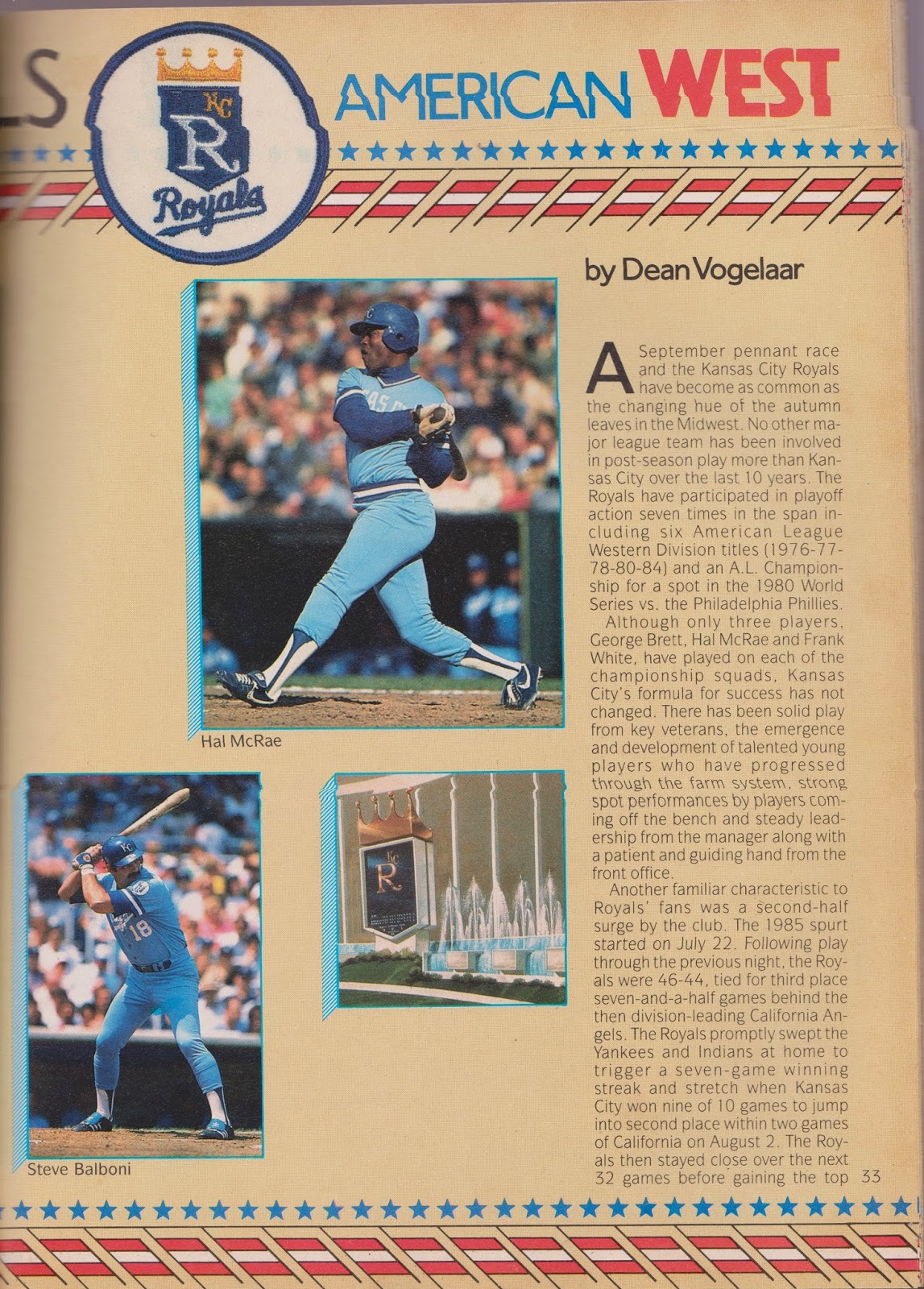 Not sure what happened to the scan on the right page, maybe my hand slipped. 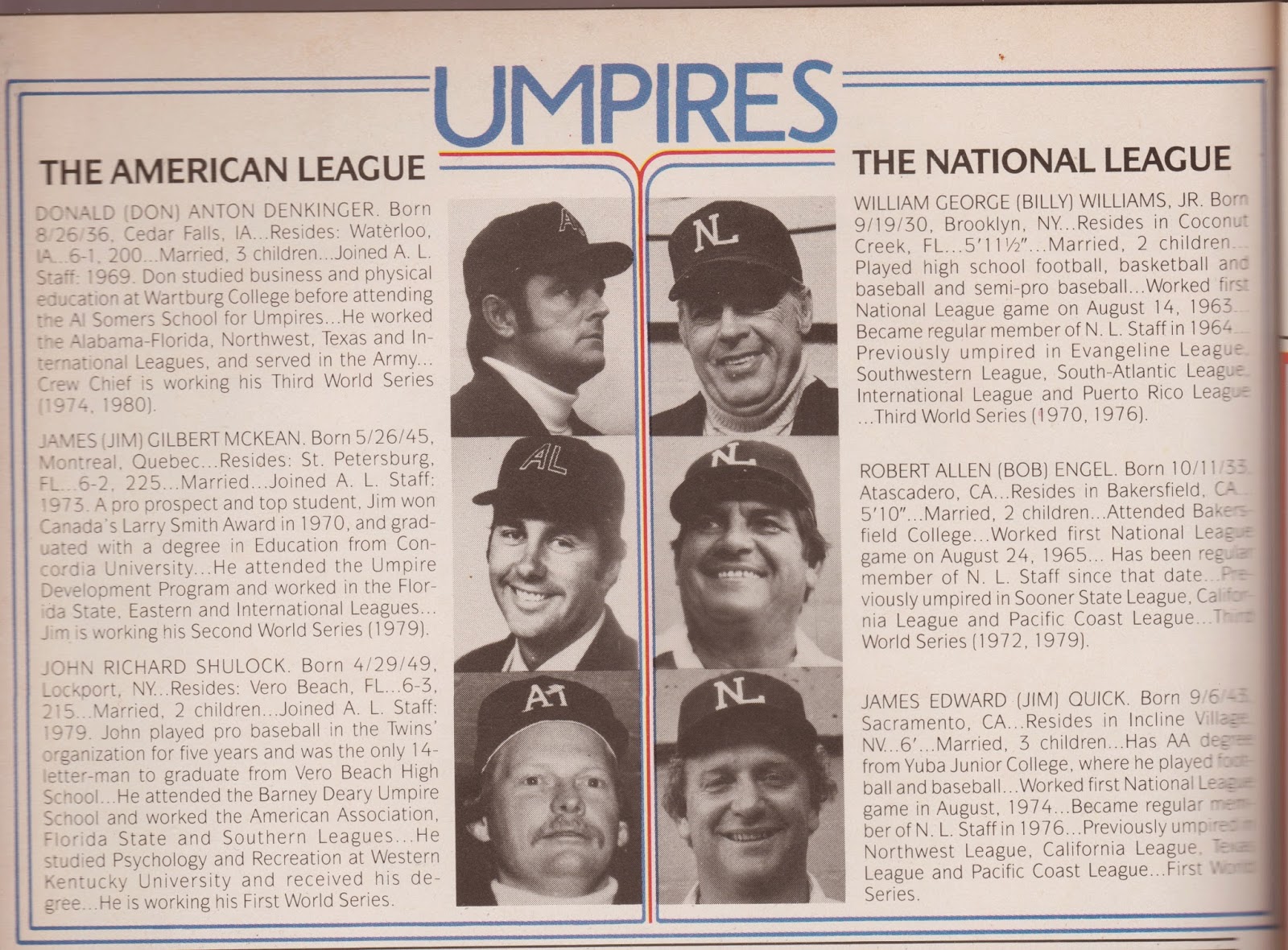 I think some people might remember the first name there.  I still don't get the grief he got for that.  Especially after all these years.  I know it was a bad call, and maybe that instilled some confidence in the Royals, but the Royals also were on the wrong side of a bad call earlier in the game, and after this event, the safe runner never scored.  In fact, I think he was still the first out.  Any blame on the loss should have been to the catcher and first basemen who couldn't catch a foul ball while facing the next better.  Sorry, off on a tangent, but someone brought it up last night (a sports reporter of all people).

Anyways, let's look at an ad from the program. 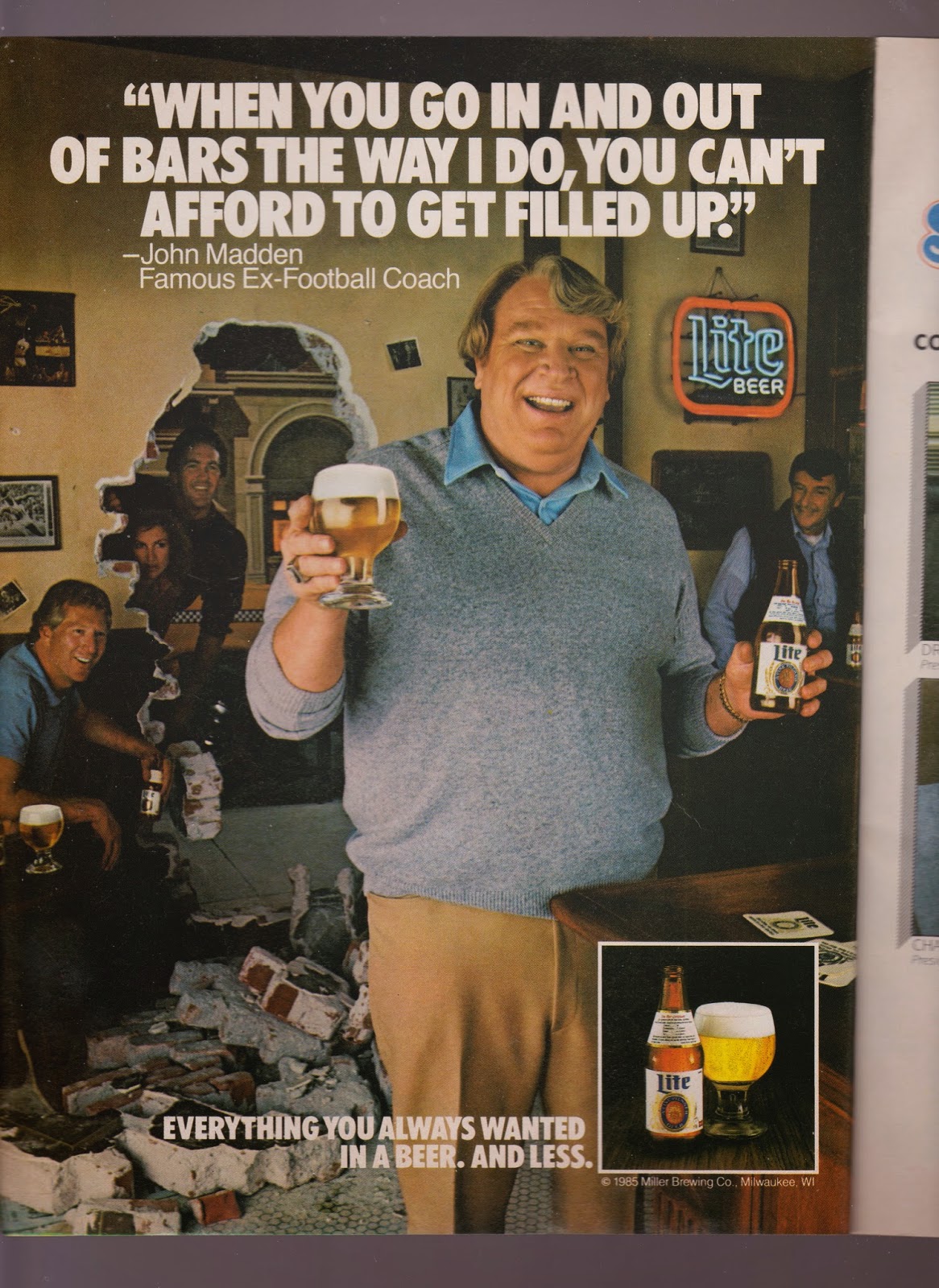 BOOM! While I don't drink, I must say I really enjoy beer advertisements.  I like ads in general, but beer ads are really hit and miss.  Not too many are great, but there are some flashes of genius.

OK, back to other stuff inside the program. 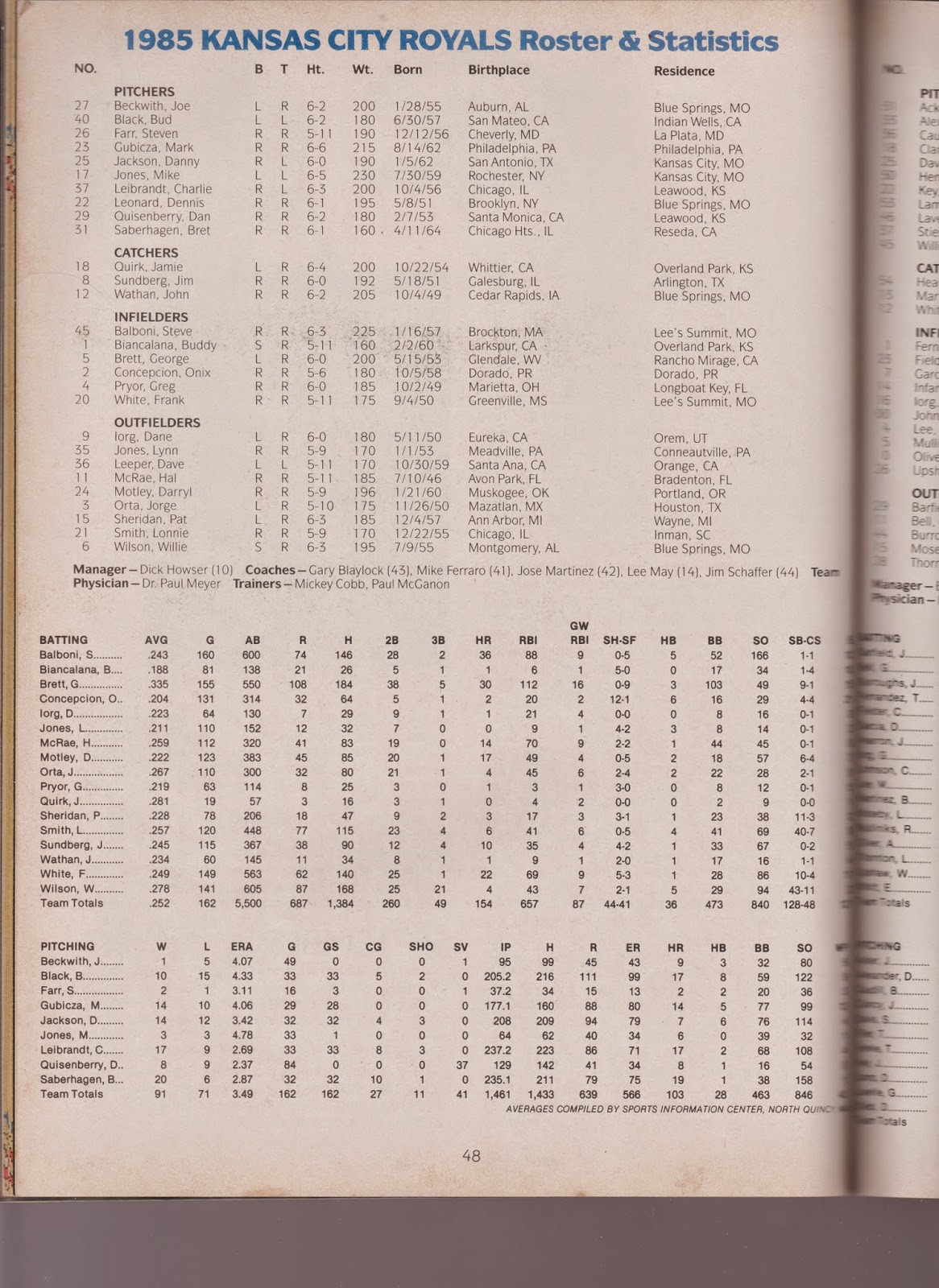 HEY PEDRO, GUESS WHAT MAN, I MADE THE ROOSTER! (A little Major League II humor). Nice way to show how the Royals got to the '85 Series. 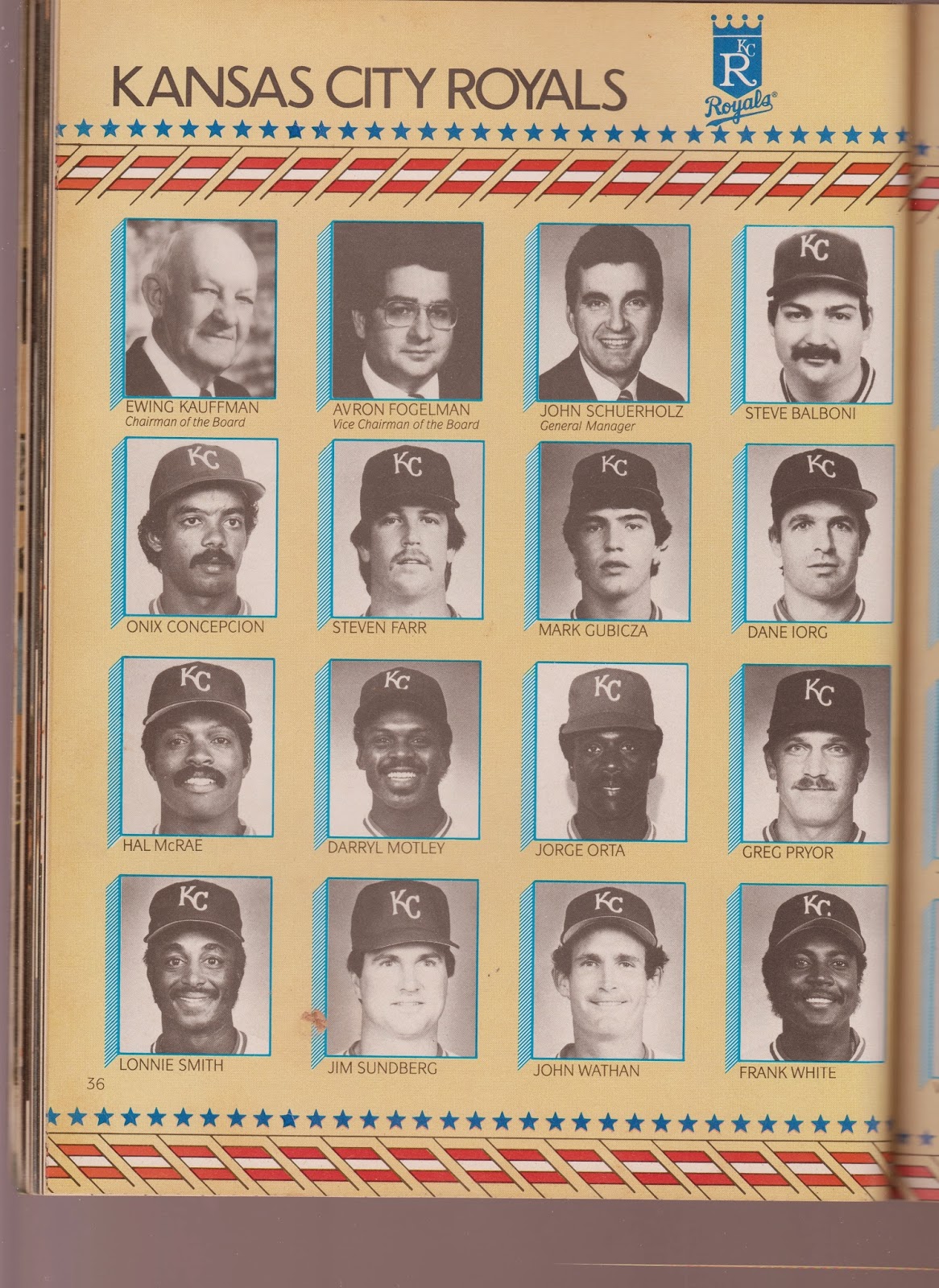 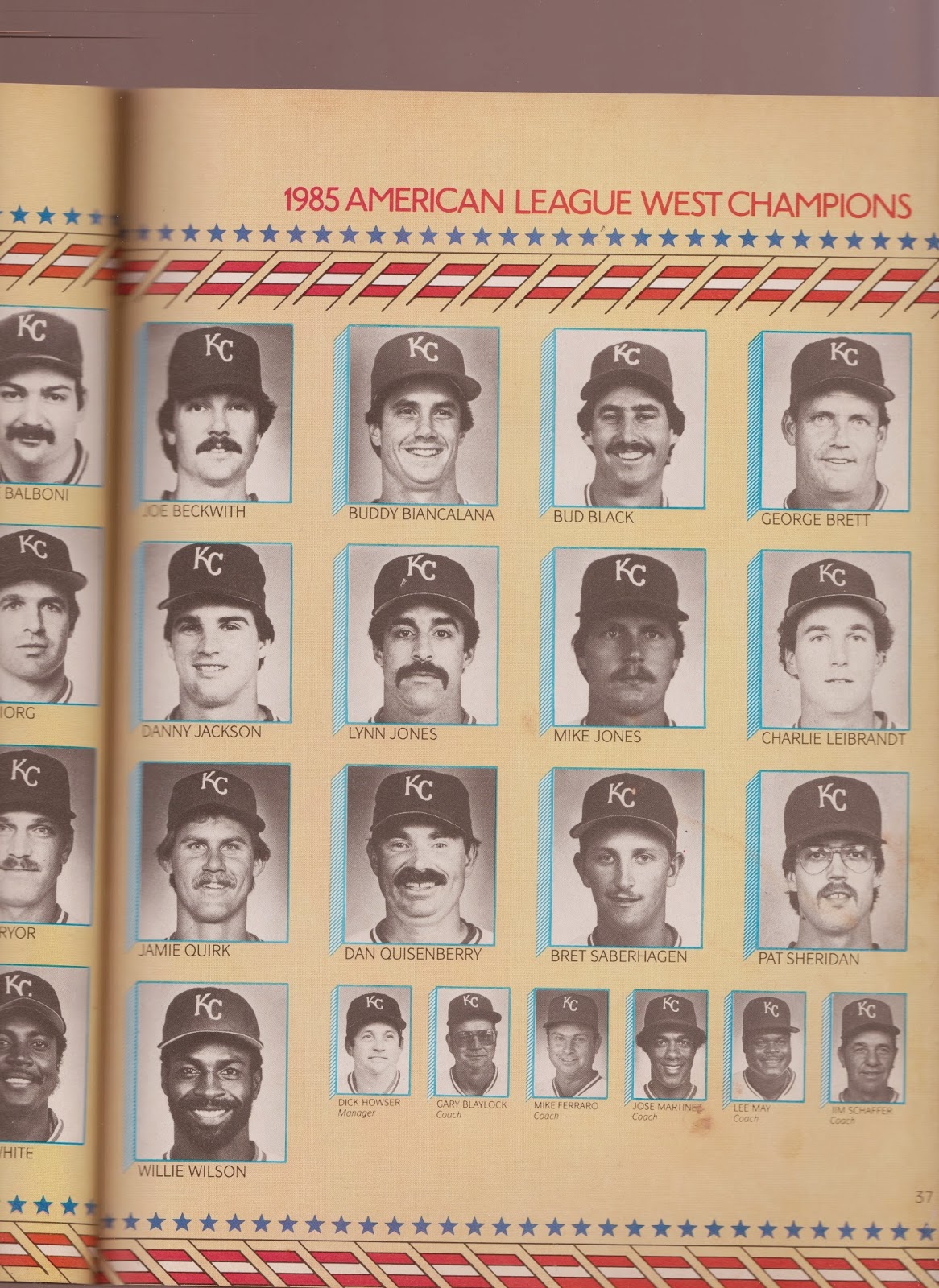 Nice to see a picture of the late Ewing Kauffman!  Also of the late Dick Howser and Dan Quisenberry.  After Howser's death, it almost seemed like a curse to the team.

Also in the picture is Bret Saberhagen, who will be throwing out the first pitch tonight!  I hope they show that on TV!

Before I go, I have a couple more things to show off, one is my paper ticket from the game I went to this year.  I would love to make more games, but I was happy to go this year, and I can't thank my friend enough for the birthday present. 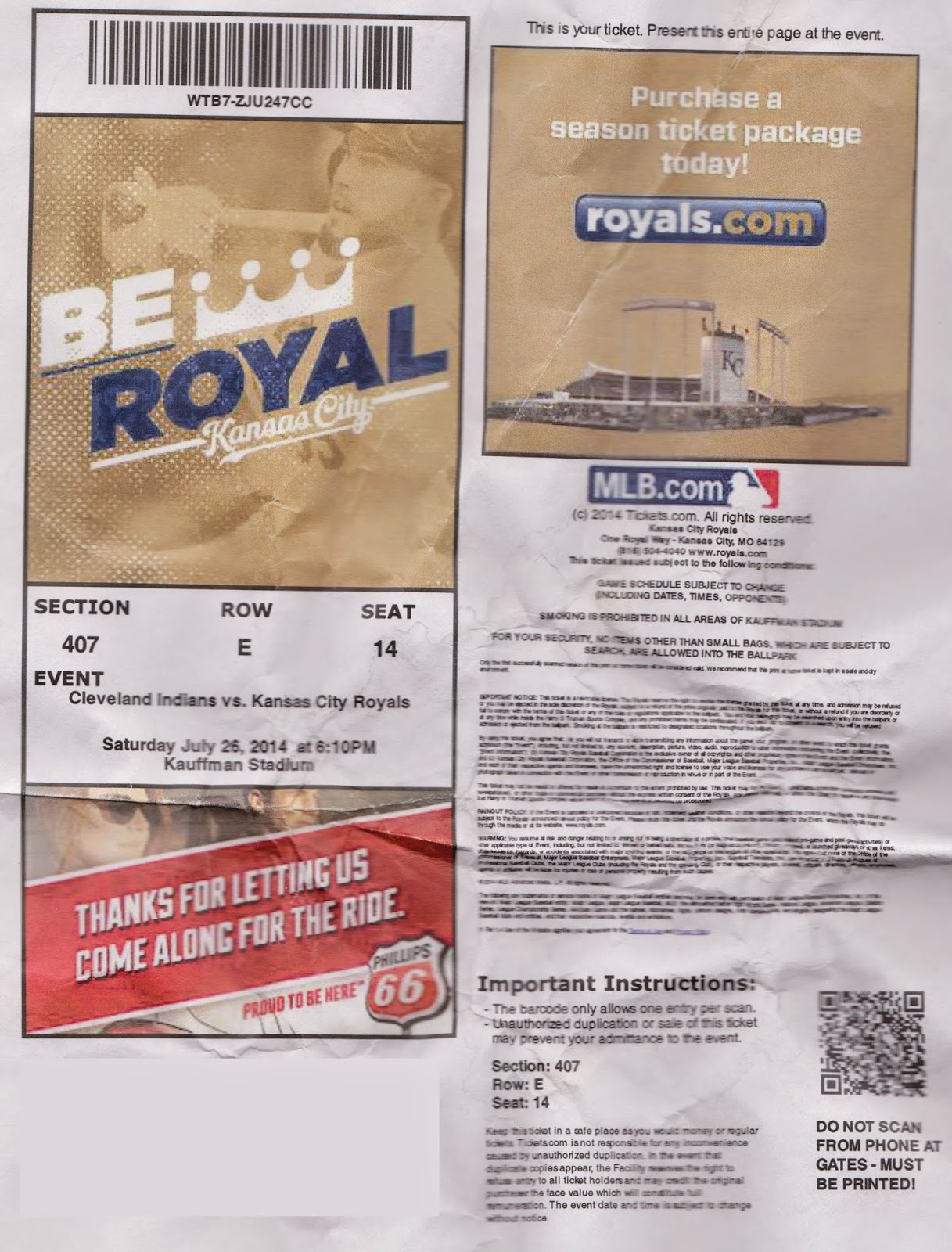 I still prefer a hard ticket over the paper ones, but if it works, this is still good to have as a souvenir.  I wish I took better care of it though.

Finally I have this gem.  In a few days, Ned Yost's hunting buddy will be so happy to have his friend back for the offseason. 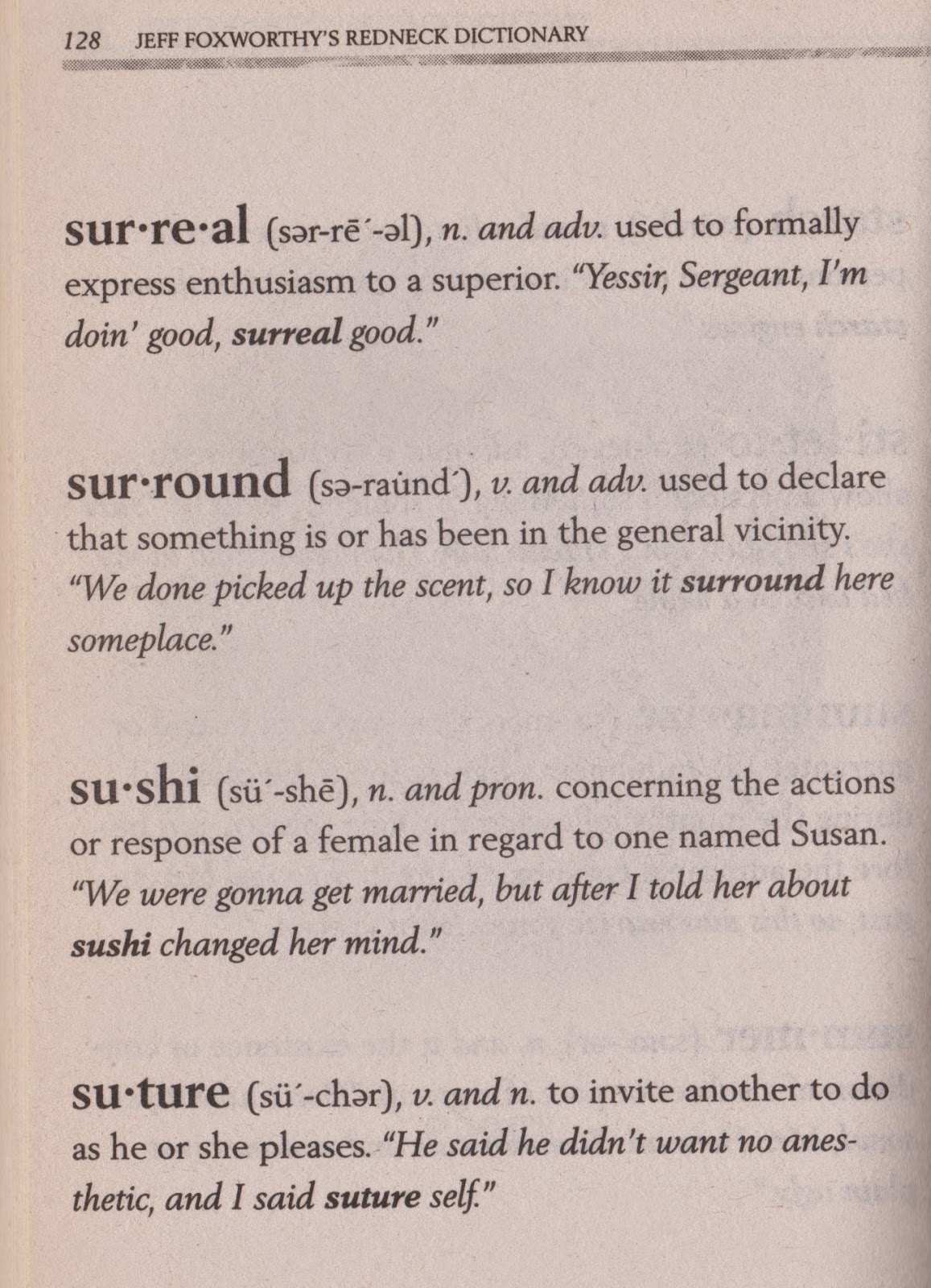 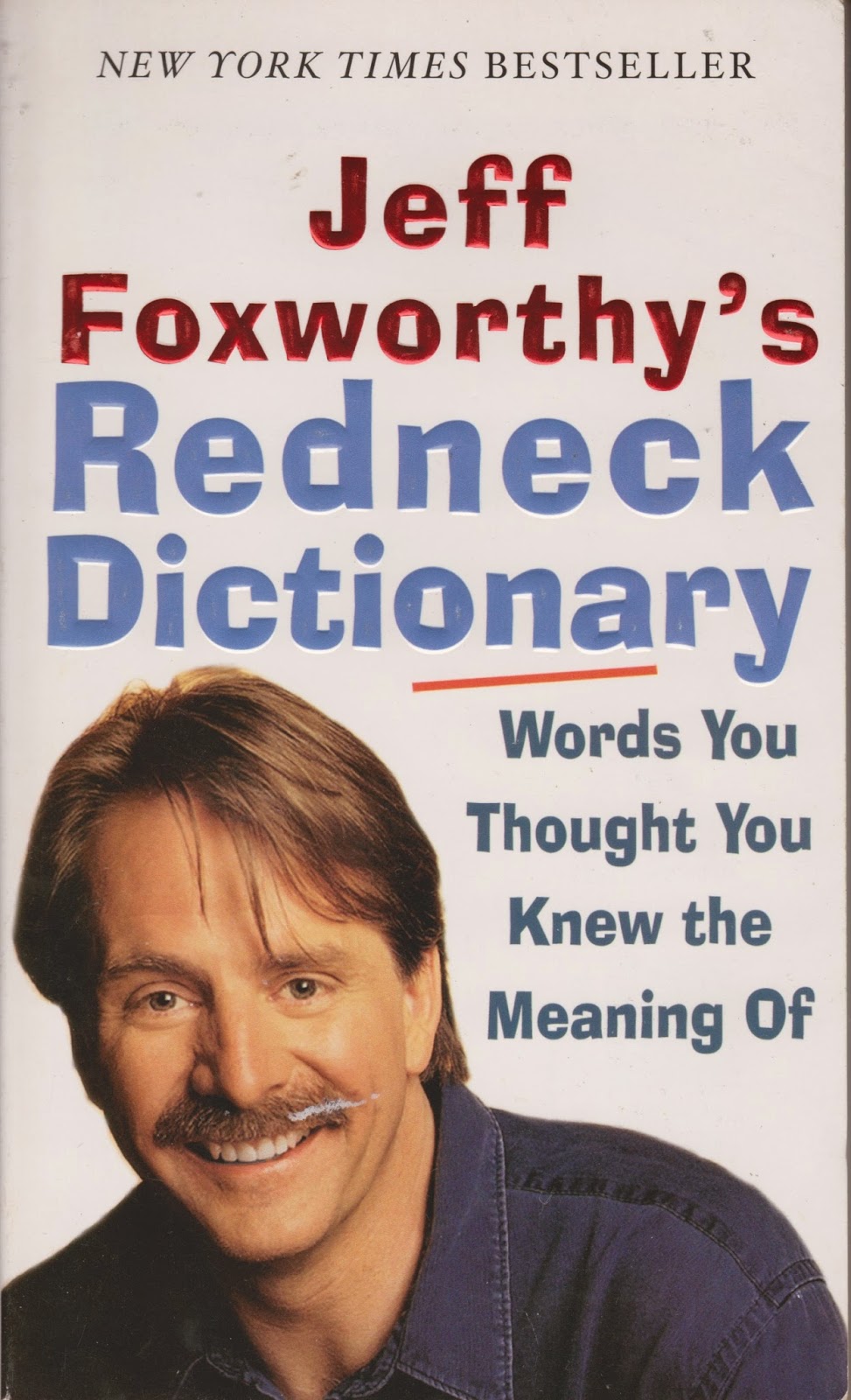 HUNTING BOOTS.... TENNIS SHOES!  I included a few definitions, among them is surreal, which explains tonight.

That will wrap it up, I hope to have an excited post to make tomorrow, and if the Royals lose, I'll still be happy, because I have some Listia wins to show off, and I got a package from Julie to show off too.

So thanks for reading and have a great night (unless you are a Giants fan, which I wish you luck, but I hope my night is a little better than yours :).