A President, a Monster, a Nitemare, and Maddux has me seeing blue

I planned on writing this sooner, but I was enthralled at the amount of money Broken Lizard has raised in under a day to finance their new Super Troopers movie.  The goal was $2 million in a month, they planned to do it through the site IndieGoGo.  Anyways, at last check, 11 hours in, they have raised over $1.3 MILLION!  It has me excited because I want to see a sequel, but also a bit confused on why people would plop down so much money just for a movie to be made.  I thought about starting a campaign for my blog so I could get an actual domain name and to promote it some, have some contests, and buy some products I normally couldn't to show off on the site.  Some days I want to do it, but other days think its a bit greedy to ask for a handout.  I have had the same thought of starting one to do a podcast as well.  A friend of mine used to have an internet radio show on BlogTalk Radio a few years back and I was the cohost.  We had fun doing it, and thought about doing it again.  We might start one up one day.  Until then, I'll just keep dreaming about being in radio, like I had wanted to do if I went to college.

Speaking of raising funds, I wanted to mention a campaign on the site Go Fund Me.  This past weekend, a superfan of the Kansas City Royals came home and walked in on a robbery.  He was shot, and his friends have started a campaign to help him with medical bills.  If you have a minute, I would ask if you could at the least check out the page.  #BounceBackJimmy is the hashtag you may have seen me tweet on twitter, and that is the reason.

Okay today I have a few things to show off that I recently won on Listia.  The prices lately have been higher than my liking, so I have been a bit more cautious bidding, but now I'm getting a little low on credits, so I might have to take a break soon.  That didn't stop me on getting these recently. 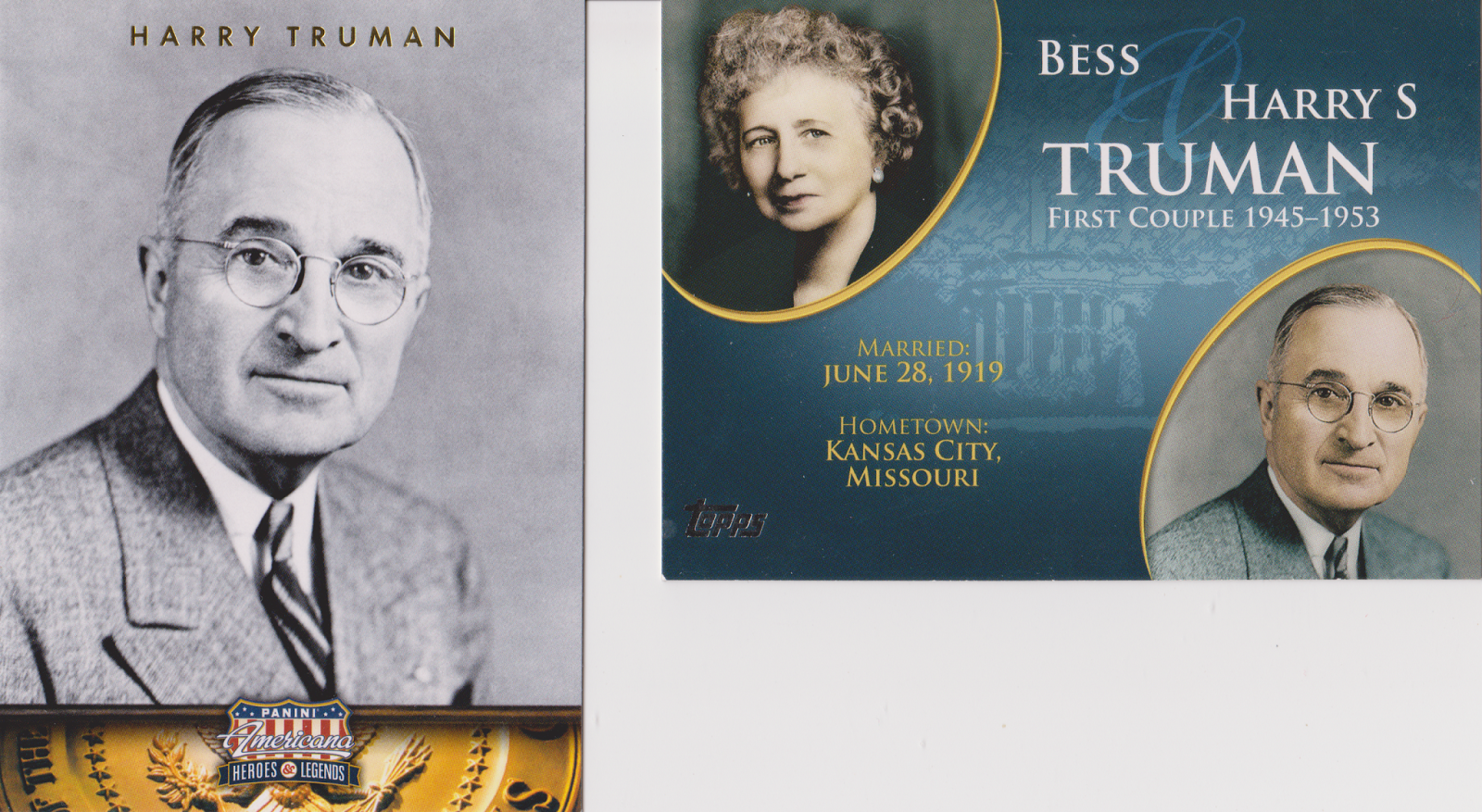 I'm not a big history guy (I am more of a geography guy), but Harry S. Truman is from my home state so when I saw this cheap, I got it.  I really like the card on the left and have spotted it a few times.  The card on the right is new to me, and its not often you see cards of Bess.  I think its funny how both cards feature the same portrait but from competing companies (did you see the NBA card recently that was rival companies with the same exact photo).  Anyways, it was cheap and I was the only bidder.  I don't think I went much higher so I was happy when I won.  It will be nestled away in a binder of famous people from Missouri or has ties to Missouri.  It's not to big right now, but I might expand it at some point. 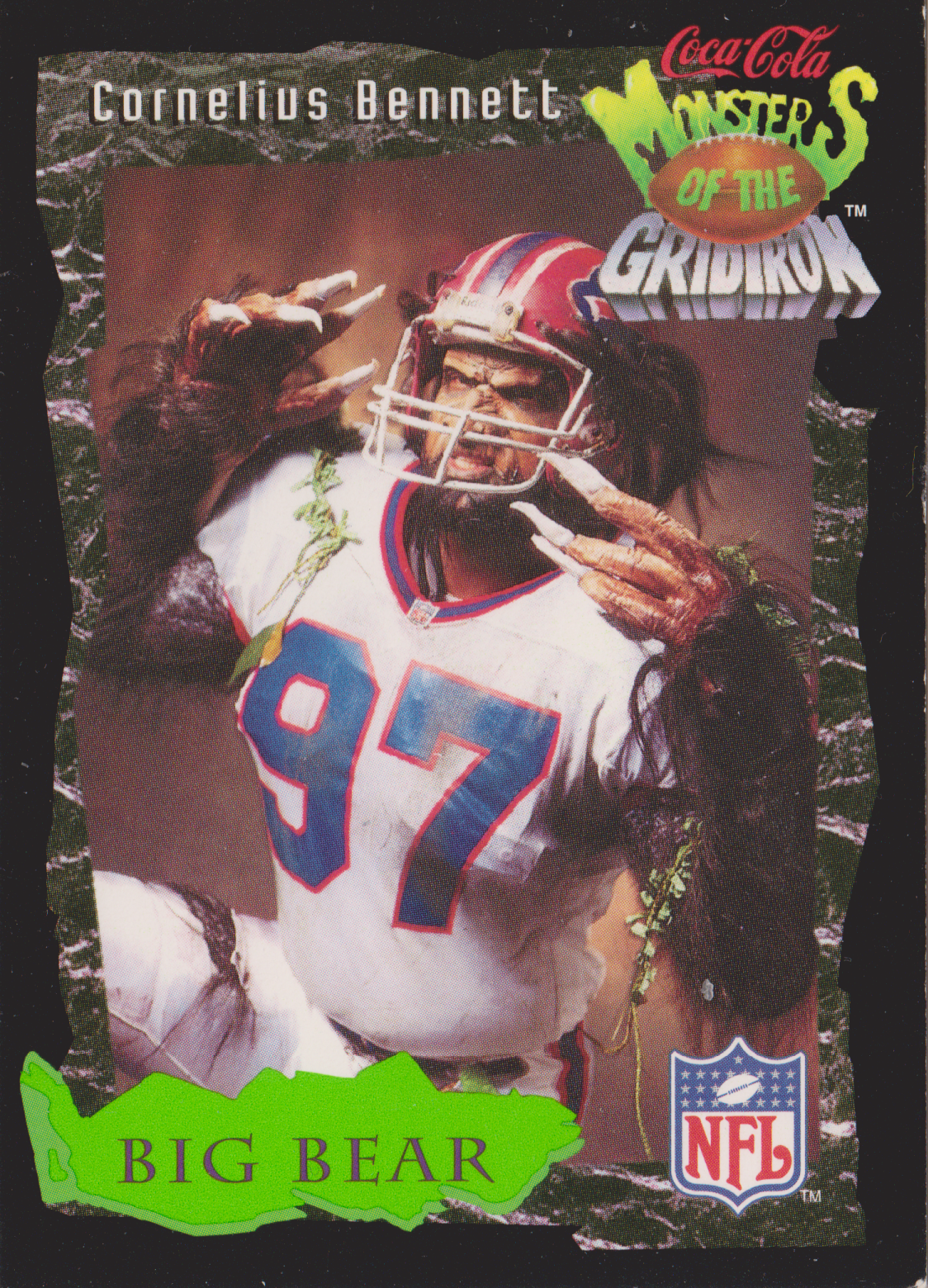 Next is a recent addition to my Monsters of the Gridiron collection.  I am about halfway done with it now, and am happy I have this card.  Last weekend I tried to win a few more I didn't have, but all of them sold at outlandish prices (they jumped from 600 credits to 6000 credits in the final seconds, 4 different auctions).  I hate weekend auctions on Listia, I do much better throughout the week.  As I mentioned before, this is a set I hope to finish by myself, and I have been thinking about getting some from COMC if it comes to that.  I just hope 6000 credit auctions don't become the norm.  At this rate I'm sure I could have bought an entire set off ebay, but I like the slow and steady approach I'm taking with it. I got a NITEMARE recently.  Though I was happy to get this one.  This card has never been on my radar, and its not one I needed, but there were a few minutes left and the bid was 1 credit.  ONE! So since I like monster trucks and such I decided to put in a max bid of 10 credits.  A few minutes later I was the winner with 10 credits!  I have a motorsports binder (well it has NBA, racing, and wrestling in it, maybe hockey too), so this will go in there.  I never heard of this one before, but it was a nice grab.  I'm not planning on making a set or anything, but if I find more for 10 credits or less I might bid.

Finally I have a couple more Maddux cards that has me seeing blue. 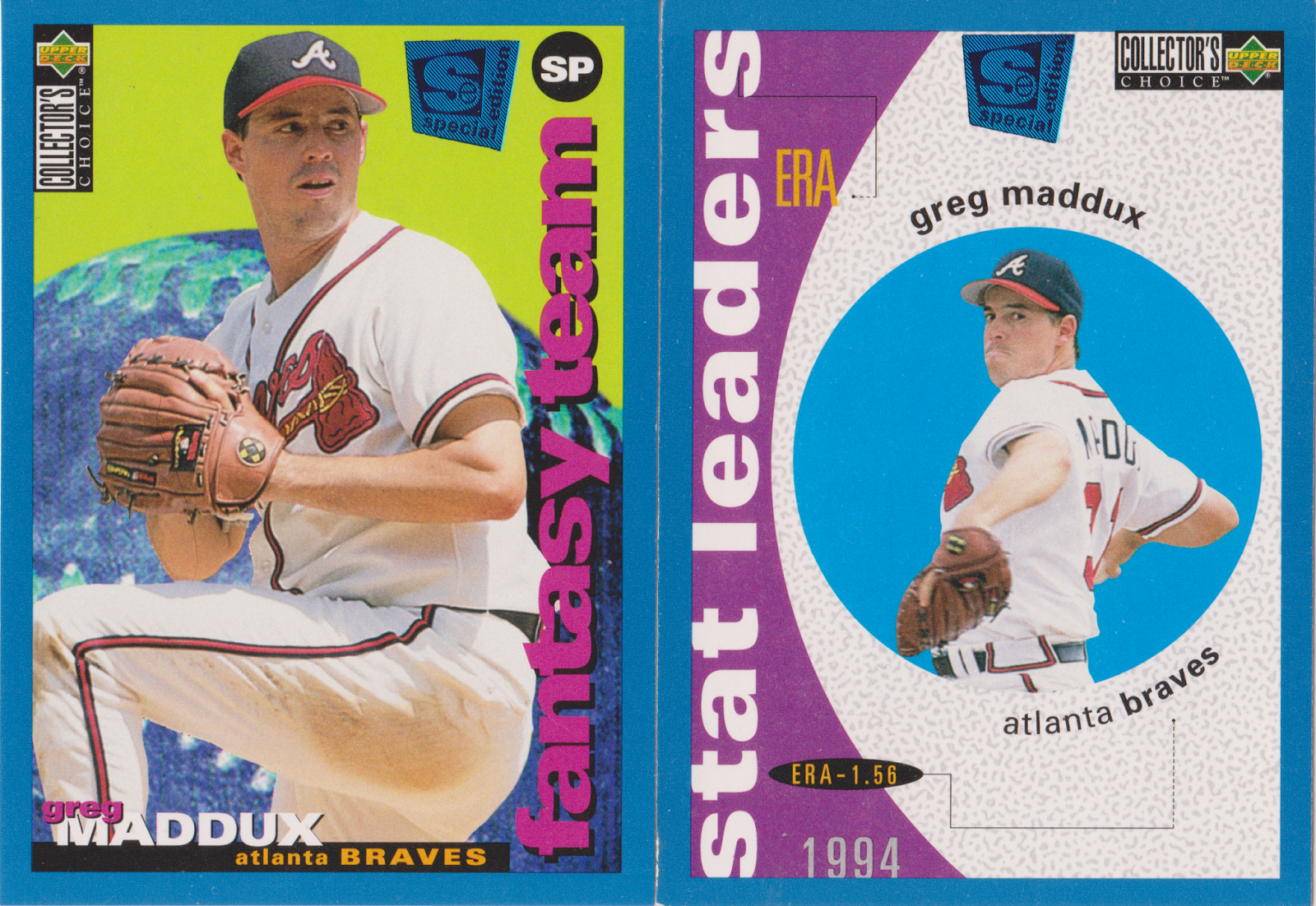 Before my recent Maddux update I saw the card on the left on Listia.  I won it for I think 499 credits (more than I wanted to spend but it was opening bid and I knew I needed it).  I was the only bidder, so that made me happy.  When it arrived the seller added the extra card, which as it turns out I didn't have either.  I was always a fan of the Collector's Choice brand because the cards were nicer I thought.  Same went for the Victory cards they produced later.  I had a few of these blue Special Edition cards, and I think I might have had both of these at one point, so having them again makes me feel good.


Later this week I will show the Opening Day cards I pulled, and I have a couple more posts planned.  I hope to have a post at least every other day, and I hope to start posting more Royals stuff soon.  I am still sorting cards, I just need to get my rear in gear and do it.  Especially before it warms up and I won't be at home as much.  Anyways, thanks for reading and have a great day!