As this weekend has started madness in terms of basketball, I have been enjoying a lot of games.  If you follow me on twitter, you might have noticed.  I just watched Wichita State defeat Kansas and while I don't like the Jayhawks, it was a good game.  Not the closest by any means, but still a good game.  I have been tweeting and some may wonder my hashtags I've been using.  First I used #WatchForTheLoveOfTheGame which is really long, and has no relation to the Kevin Costner movie (which is worth watching).  A previous post mentioned a went bracketless again this year, and am watching the games as neutral as I can be.  The aforementioned Shockers game was the first I had more than a little bias.  It has allowed me to see great moments without feeling bad for teams I picked.  I realized that hashtag was a bit long so I shortened it to #W4TG.  Short and sweet, it means Watch For The Game.  Neither hashtag have been used much, so you should find my tweets.  I like them enough that I might use it for other events I watch like the NBA Playoffs, NHL Finals, or any other game I don't have a team competing (like most Sunday Night MLB games).  I've also used the motto, so it made sense to start a hashtag.


Anyways, its time for the post to begin.  Today I have a few things to show and mention so let's begin with my favorite non-Royals player ever- GREG MADDUX!  I have gotten a few cards of his off Listia recently so I decided yesterday to update my have list, and it added about 15 cards I didn't have listed before.  Here is one that I didn't have (and is scanned on my other computer so the pics are via COMC. 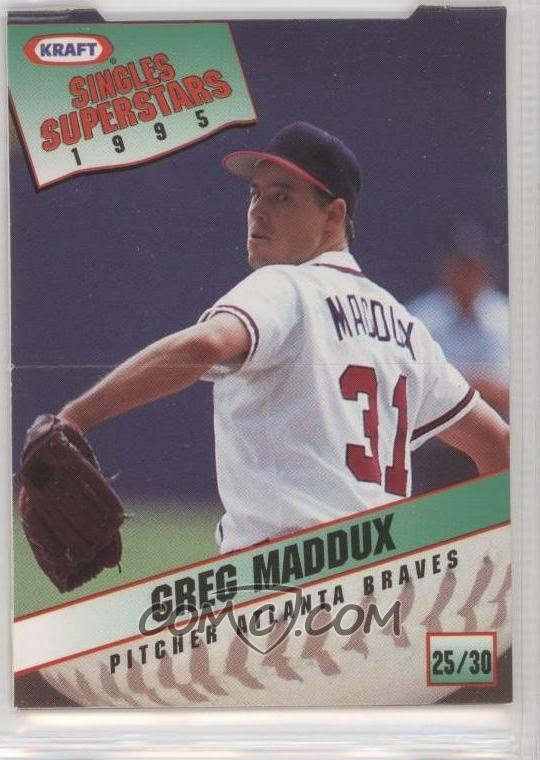 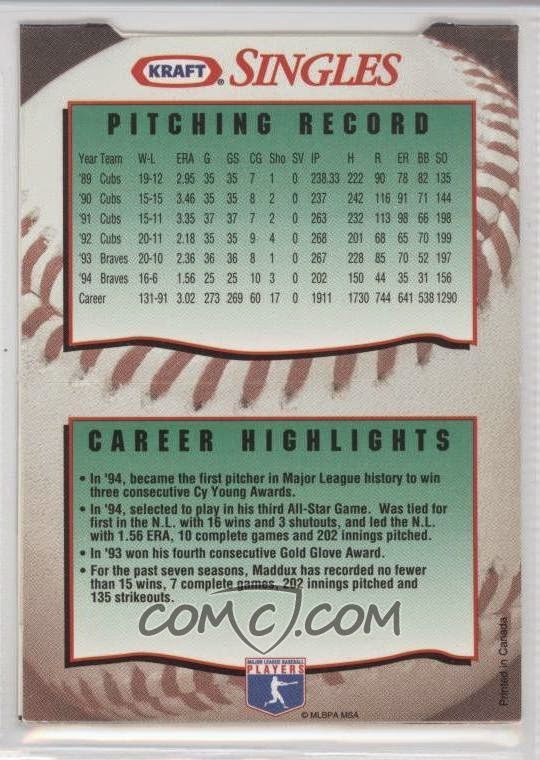 Cool oddball card I never saw before.  I was the only bidder (thank goodness for less activity during the week).  When I opened the package I was happy.  Then something caught my eye.  IS THAT A PULL OUT?  No mention of that, so I pulled it. 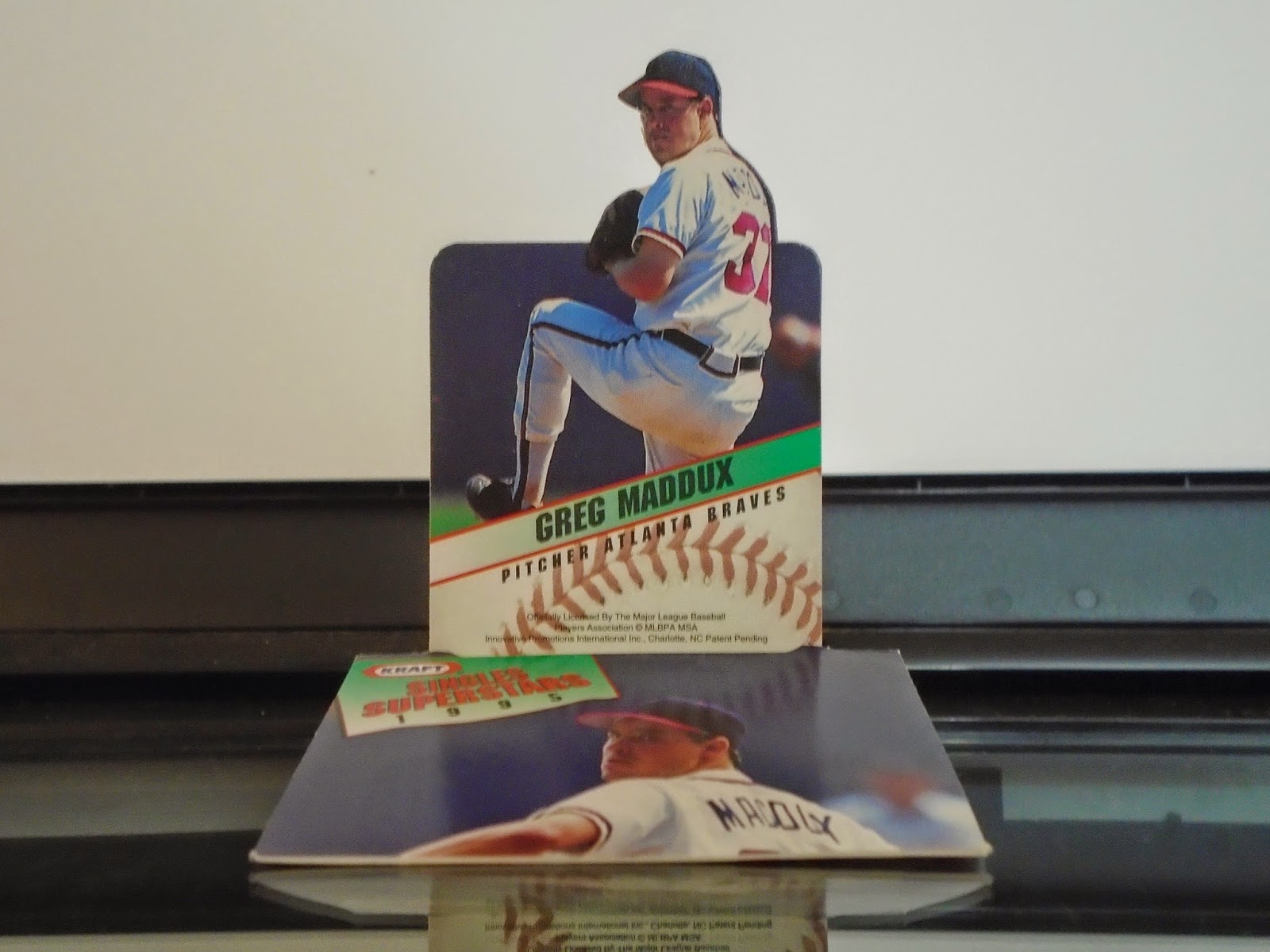 Holy cow this is cool?  It had never been pulled either as far as I could tell.  I like this card even more.  Here is the back. 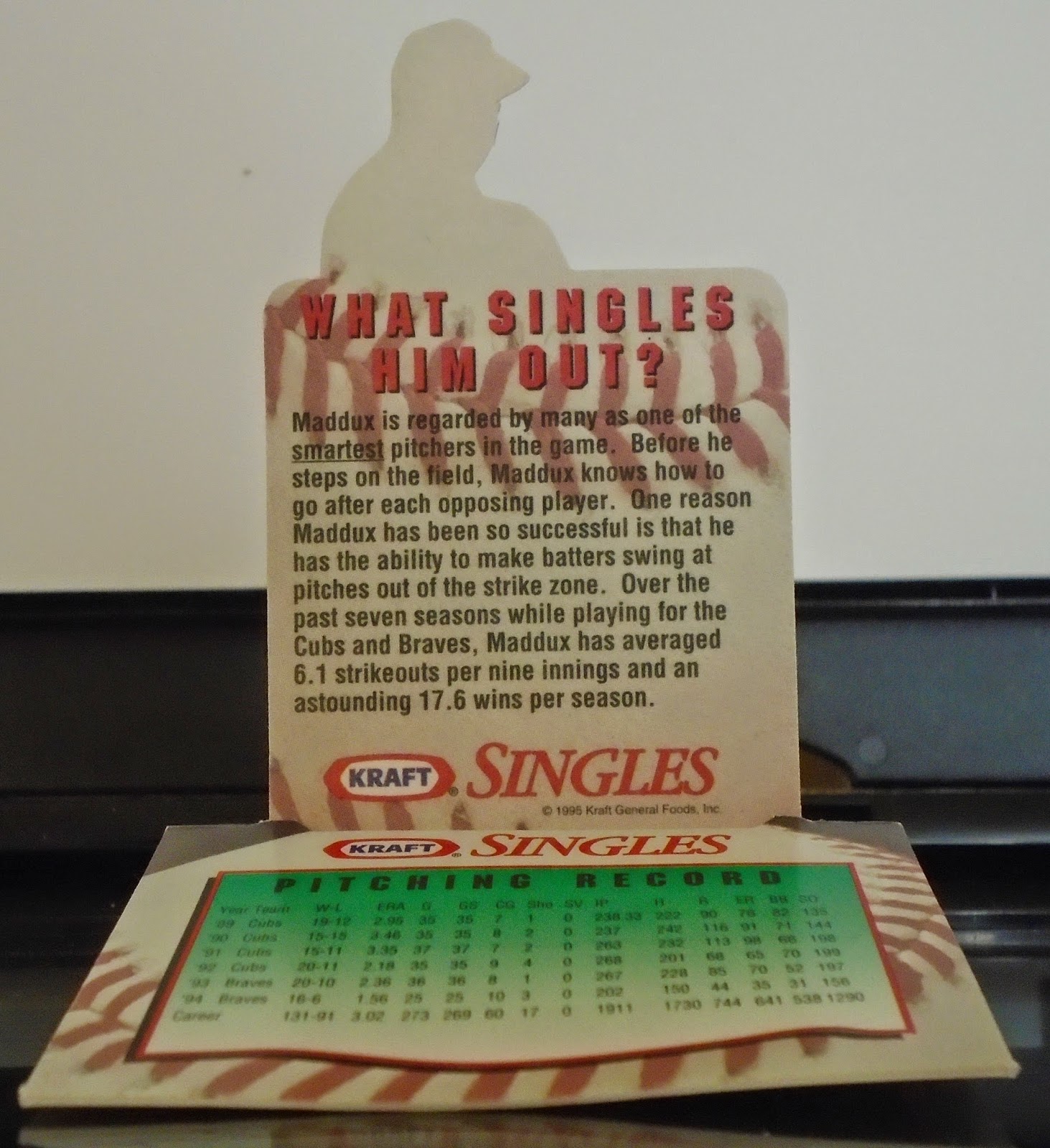 I would like to see similar cards made today.  This could be a nice insert set for some set.

One of the better cards I've gotten in a while.  So let's move on.  I mentioned when it started I wasn't going to be showing my Wallet Card much, and to be honest, I've forgotten a bit, but it was a nice day so Kevin Appier took a trip. 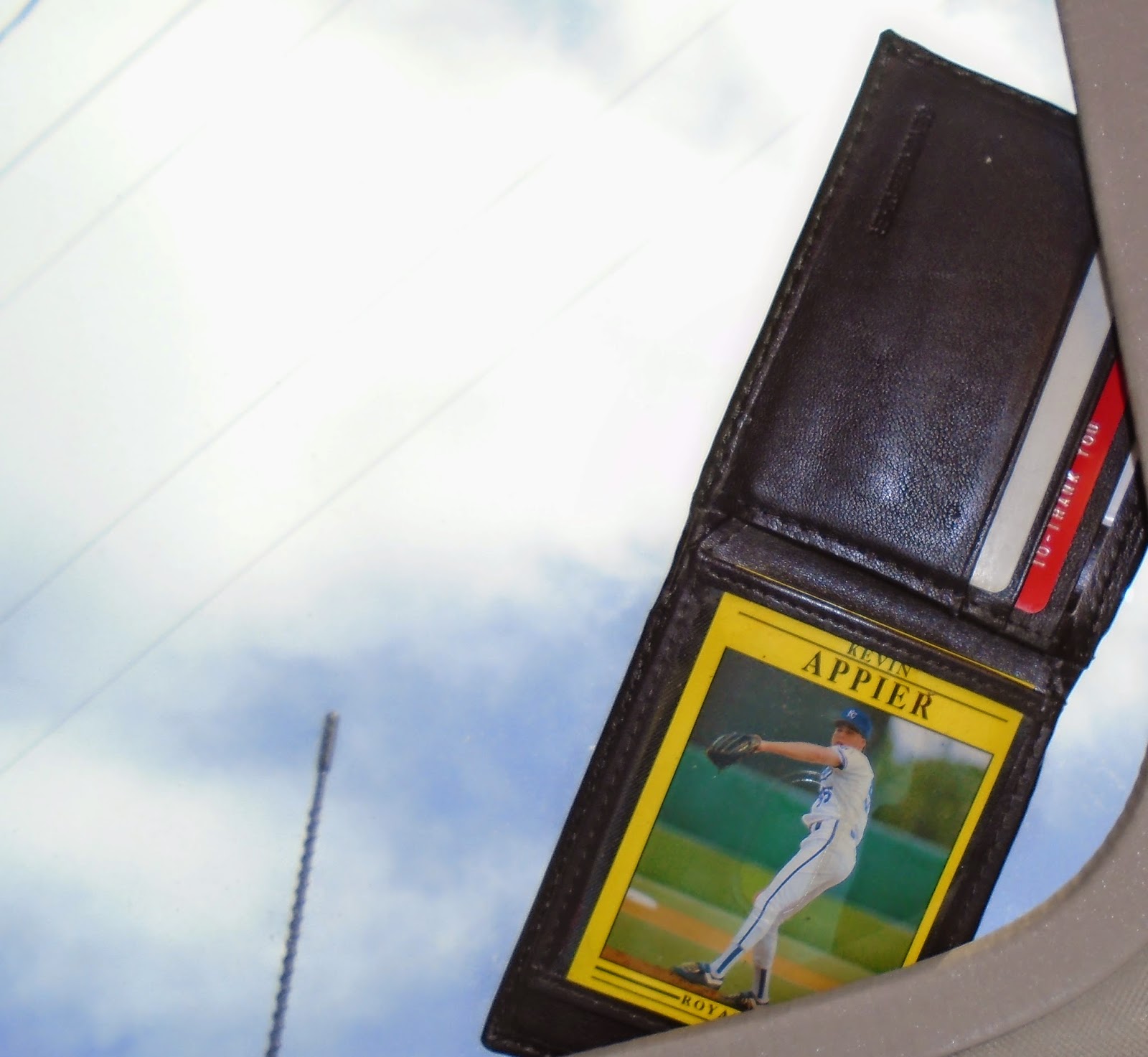 A nice shot of the skyline of my hometown.  I think that is the car antenna, so a nice day as far as you can tell.  One day Ape might actually get out of the wallet.  Hopefully in a month or two I have some stuff planned and he'll see more light of day.

The day I took that picture I went to one of my favorite stores- Savvy Seconds.They no longer have 20 books for $1 (now 5 for $1), but I did find a couple things.  One was that book I recently showed.  Here is the other item I got. 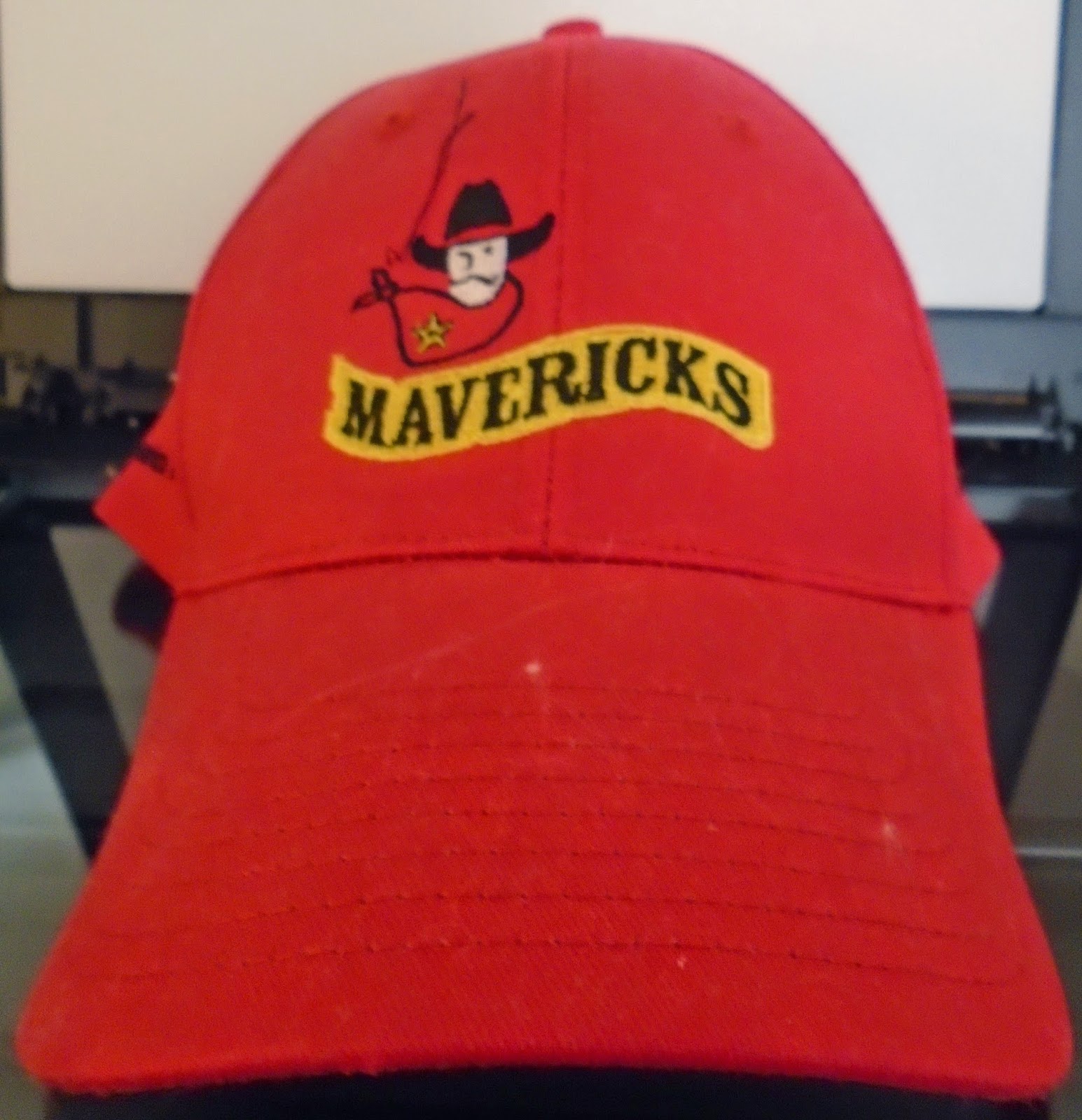 The Mid-Missouri Mavericks were a short lived non-affiliated to the MLB minor league team based in Columbia, Missouri.  I am going to talk about them one day on here.  It will be part of a feature I hope to start soon.  The hat set me back a buck, and is in almost unused condition.  They had another but it wasn't in great shape.

Let's wrap up the day with a box.  I got it last night. 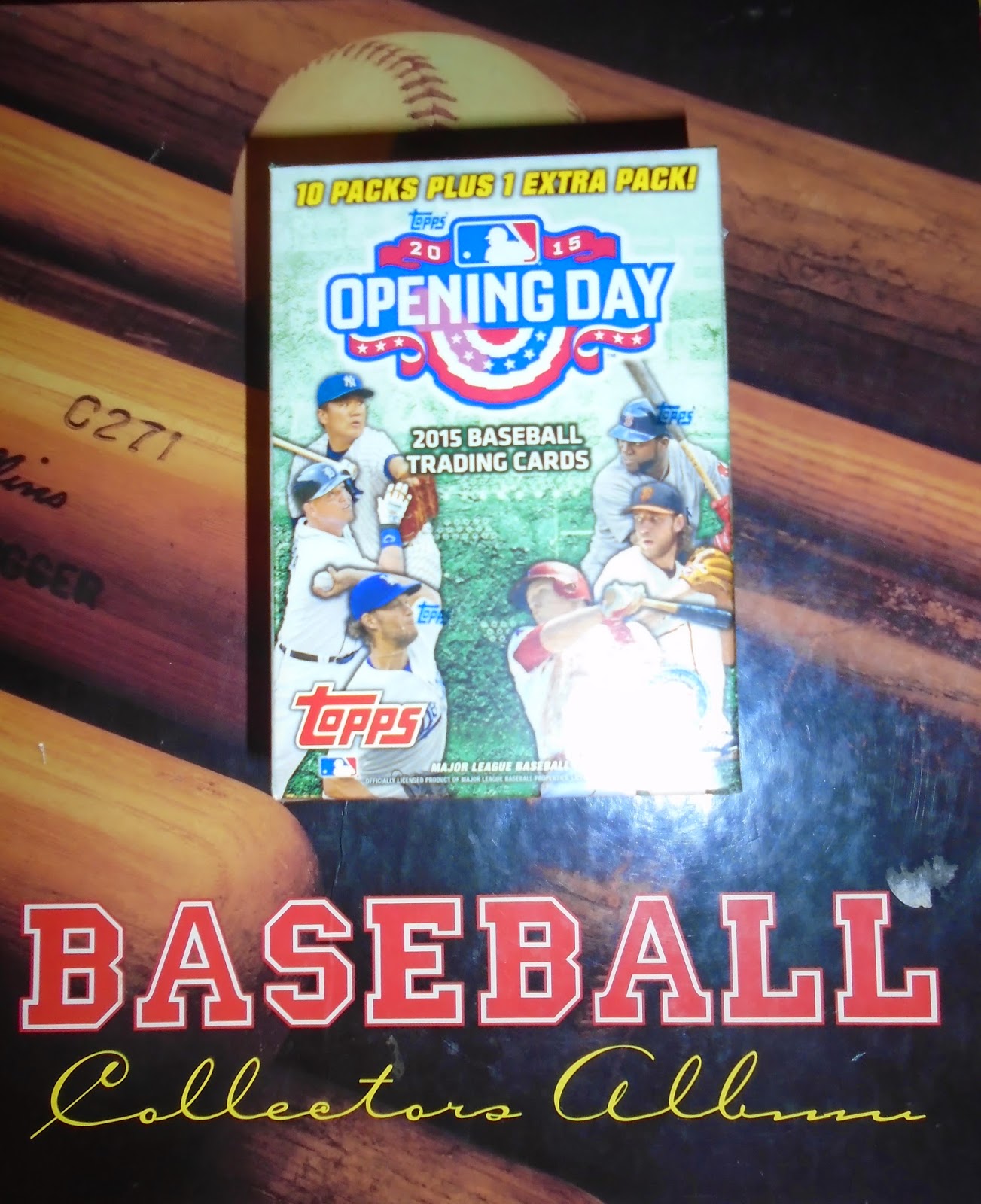 I had a couple extra bucks when I went to Walmart last night and this was only 10 bucks.  Not bad for 11 packs. 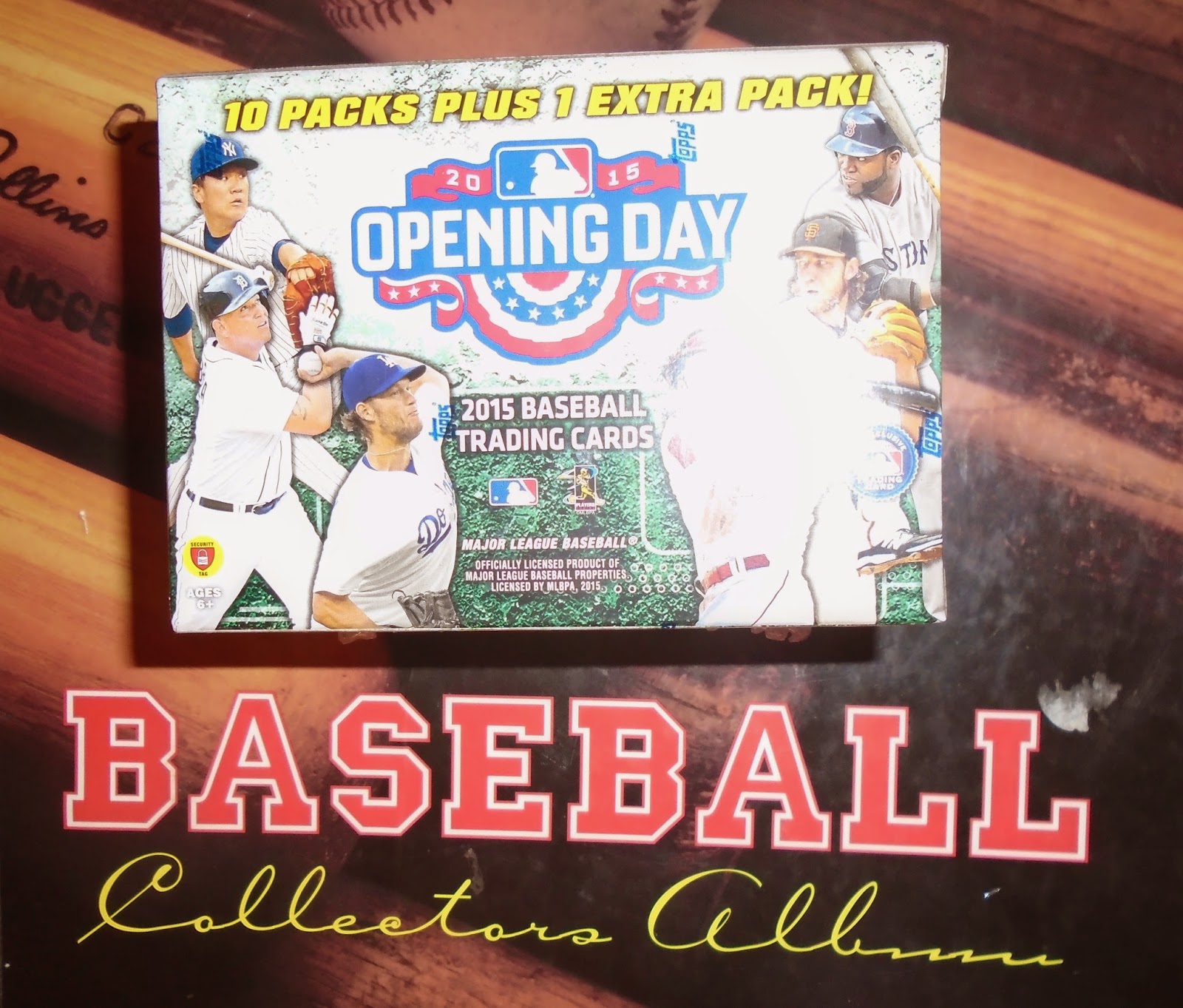 I don't get excited over Opening Day sets, but I like the design enough and it was cheaper than anything else.  I will show the results in a future post (I hope this week), and eh, it was good, I guess good enough that I might get another box in the future if I have a few extra bucks.

That will wrap it up for today, thank you for reading and have a great night.