I kind of missed my birthday

I wasn't on the internet for a week last month.  I've brought it up, but the reason I'm mentioning it again is because during that week, I had a birthday.  I am a Valentine baby, born in 1982.  That makes me... (let's see, carry the one, add 3...) I am now 33.  Crap, time crept up on me.  Anyways, on my birthday, my best friend dropped off a present for me.  He always knows how to brighten my day.  In case you haven't read my blog before, my best friend also has a blog, its called TALKIN' TRUMAN.  If you have seen his blog, then you know we have a common bond about our fandom of Mizzou.  He leans more to the football team, and I veer more to the basketball (yes even this year where its been a bit... lackluster).  Anyways, gave me a few Mizzou goodies, and here is one of them. 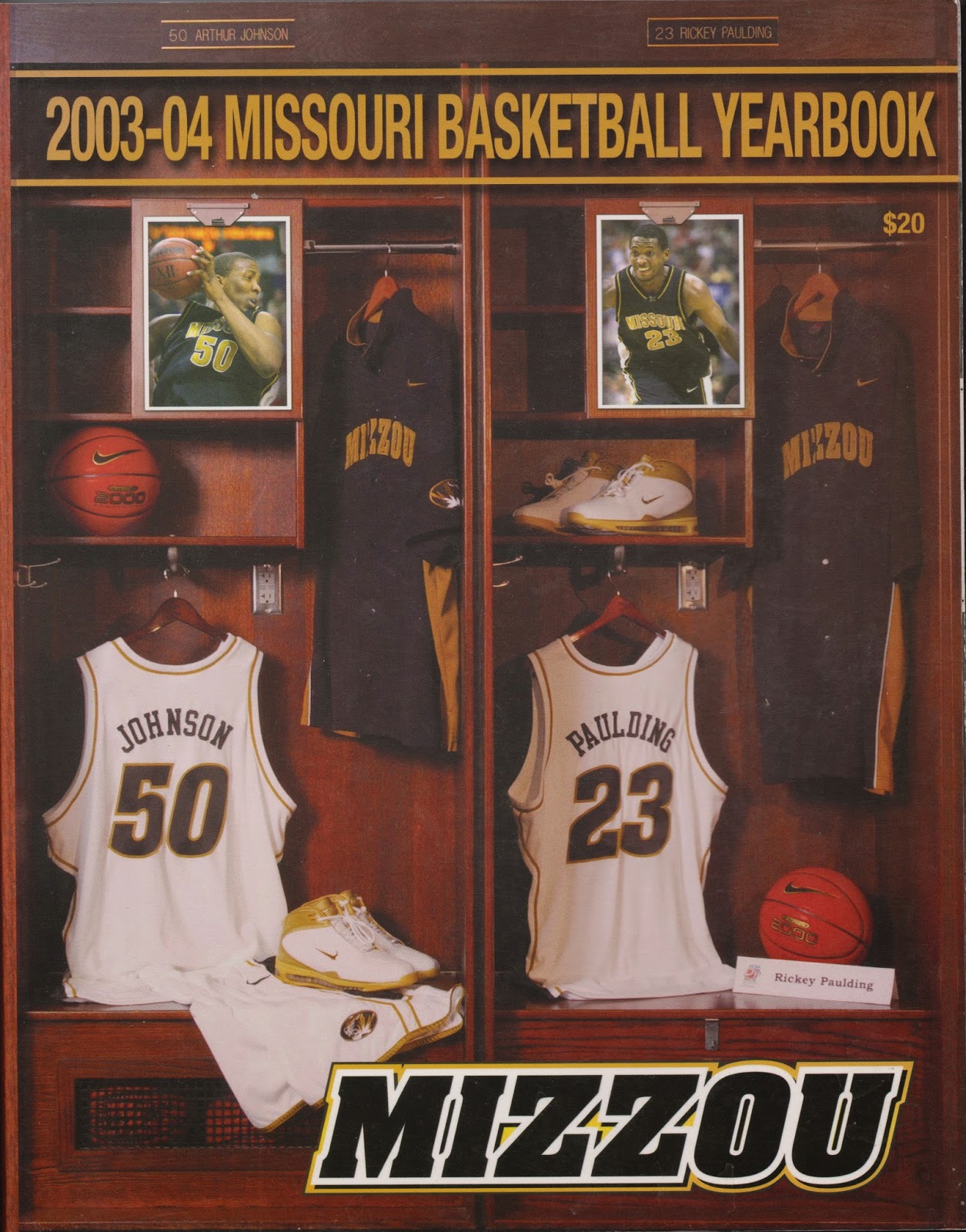 My friend finds a lot of old Mizzou programs, media guides, and yearbooks on ebay.  He sometimes buys them in lots, but is only interested in the football ones.  He usually gives me the basketball ones.  I think in total he gave me 4-5 this time, 2 or 3 I already had from the last time he gave me some (including this one).  That's not bad though, I told him I'd give them back to him and maybe he can make some money on them.

It's fun going through these and remembering some of the players.  Unlike programs, they are light on the ads, but they have tons of stats and records in them.  They list just about everyone on the staff, and in a couple I even seen a couple people I went to school with (they were student managers or some sort of interns).

One of these books though caught my attention.  The one above mentions the new arena being built and 2003-2004 would be the last year in the Hearnes Center.  The yet to be named arena was starting to take shape. 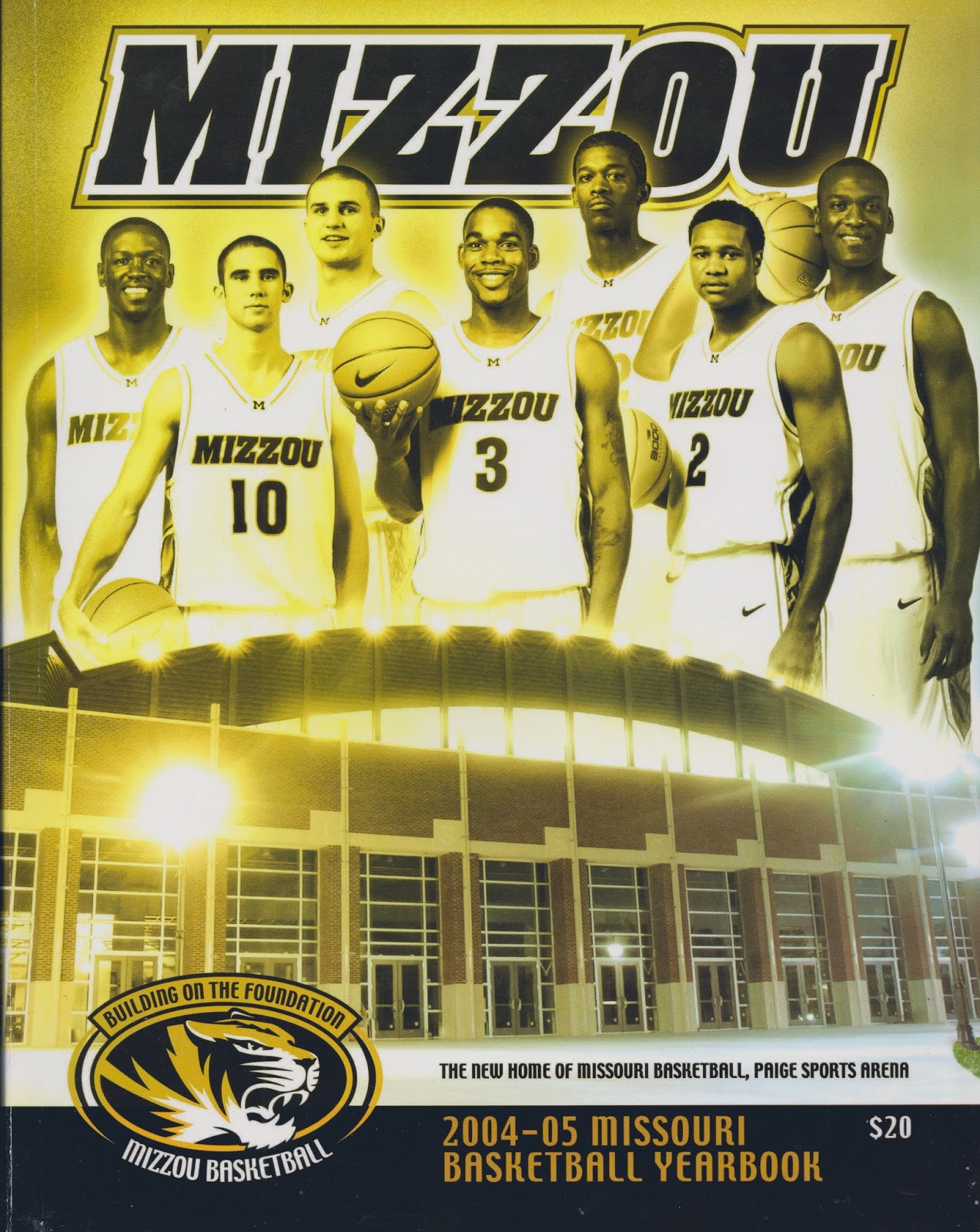 This yearbook was one I was happy to get.  I wanted something official from Mizzou that named this arena Paige Sports Arena.  Locally known as the PSA (or maybe I just made that up, some people did call it the Paige, and today still jokingly do), shortly after opening, the naming rights went into question and less than a year after opening, it was renamed Mizzou Arena.  For those that don't know the story, its a bit comical (at least to me it is).  Mizzou has a rich history and many famous alums.  Among them are the Kroenke family (Stan is the one who wants to move the Rams back to California, and his son Josh, a former MU b-ball player is now Team President of the Denver Nuggets and Colorado Avalanche), and the Laurie family (Bill and Nancy Laurie are the ones who donated the $10 Million to build the new arena, and the "Paige" is their daughter).  Both are rich many times over thanks to another former Mizzou product- Bud Walton.  Basically a lot of Missouri is funded by Walmart, for better or for worse.

The reason their is controversy over this arena is two-fold.  First, Paige Laurie never attended the University of Missouri.  A lot of people weren't happy some rich kid has an arena named after her when she never did anything for the University.  Now I agree it shouldn't have been named after her, but to be honest, I kind of like the name Paige Sports Arena.  To me it has a nice ring to it.  However, I also loyal to the old arena, Hearnes Center (named after former Missouri Governor William Hearnes).  The other controversy is shortly after the arena opened, Paige got into a bit of hot water.  While attending a California college (I think it was USC, I'm not 100% sure), it came out that she paid someone to take her tests, and she didn't earn the grades she got.  The University of Missouri decided shortly after this happened to take her name off the arena, and rename it Mizzou Arena.  I'm not sure if it was a temporary name change or what, but a decade later the name remains.

Since this all happened within months of opening, not a lot of items were produced with the Paige Sports Arena name.  I'm happy I finally got something.  I'm also watching a paperweight on ebay, but not willing to drop $100 on it.

Before I go on, I want to make a really quick point about how Missouri is Walmart country.  The city of Columbia has 3 Walmart Supercenters, and a Sam's Club, plus a Walmart Express.  On paper that doesn't seem odd, but considering there is only one Target (inside a mall), it makes it obvious Walmart has a lot of pull.  Maybe I just want another Target to open up in Columbia, or at the least, some other option (I miss Kmart and Osco Drug).  Sorry rant over.

Anyways, my friend also gave me a card (which I didn't scan), but inside had some cards inside.  Let's take a look.

YES, ODDBALLS AND SOME BRETTS!  The first card is from 1991 from the Mootown Snackers.  I've heard of this card, but was happy I got it.  The only Royals card in the set, so it also completes a set. I still love the powder blue unis.  Even after airbrushing the logos off, I still like this card a lot.

Next is from 1990 and is a Sports Illustrated for Kids card of George Brett.  I've had my eye on this card for a while, but never jumped on it.  This also completes the team set via being the only Royals card in the set for the year.  I liked the thickness of the old SI cards compared to today.  However, I wasn't a fan of the design.  Which by the way, at the start of the new year, SI for Kids did another redesign, too bad they didn't make the cards thicker.  I might scan the new looks soon.

Finally is a another card I've eyed for a while.  Actually according to my checklist (not the one on here, but an unofficial one) I might have already had it.  I really need to finish organizing my cards.  I will never be upset at a minor league card of Johnny Damon, and Action Packed one no less.  I loved the embossed feel of them.  I don't remember having any baseball ones, but do remember trading for some football ones in the schoolyard once.  It was a Buffalo Bills card and I believe the player was Shane Conlin.  The only other embossed cards I really remember are the WCW Topps cards released in 1999.  One day I'd like to build that set again.

Well that's enough rambling for one morning.  I know its an odd time to post, but I promised a new post on facebook and twitter yesterday, and I didn't want to get sidetracked again and not do a new one, so since I had time I wrote one in the morning for a change.  So thanks for reading, and depending on when you read this, have a great day (or night).