Put Your Name On It- Phoenix Suns

When I was in school, there wasn't a NBA team within close range to where I lived so as a result, you would see jerseys from all kinds of different teams.  The Kings moved from Kansas City 3 years before I started school, and by 5th grade, they were a decade removed so nobody rooted for them.  Regional sports channels weren't as prevalent so the team we saw the most on TV was the Chicago Bulls (thanks WGN, I'm not sure where I'd be without you).  I had a replica (aka: Walmart cheap) practice jersey of Houston Rockets Hakeem Olajuwon which I still wear today.


On of the cliques in my class were all skilled basketball players, they all played on the basketball team.  The girls team, nothing wrong with that, the girls team was usually better than the boys team.  The all seemed to prefer the Phoenix Suns.  I forgot the reason, I thought it had to do with them meeting one of the players once, but I'm not sure. I could ask them, I'm still friends with them, but to be honest, I don't care.

Anyways, while I had a Rockets jersey, I rooted for the Charlotte Hornets more and then random players around the league.  One of those players is the reason for today's post.

I loved seeing Dan Majerle play.  I'm not sure if it was because he was one of the few white players I liked, if he played for the Suns and I tried to fit int, or if I liked his nickname.  Maybe it was all three.  "THUNDER DAN"  was amazing to watch.  He was a three point sharpshooter, one of the few that I never got mad at for taking wild 3 pointers because there was a good chance he'd make it.  He also was on the 1988 Olympics team that won a bronze medal, and the 1994 FIBA team who won the GOLD!

He was traded in the 1995 offseason to Cleveland (which as it turns out, I have a pullover from that time which again, I can still wear), and to be honest, I don't remember his time there.

The next year he signed with the Miami Heat (I don't have any clothing from them, but did like them at the time).  I really liked watching them play when I could.  At that time I was entering high school and I was taking stats for the basketball team, so I didn't get to see much more than highlights on SportsCenter which usually showed Thunder Dan making threes.

In 2001, Majerle would return to Phoenix to finish out his career.  In 2003 he was inducted into the Suns Ring of Honor.  He would become an analyst for TNT and ESPN after that, and was inducted into the Michigan Hall of Fame in 2006.  He became and assistant coach for the Suns in 2008, and would stay there until 2013 when he was hired as head coach of Grand Canyon University, the teams first year. 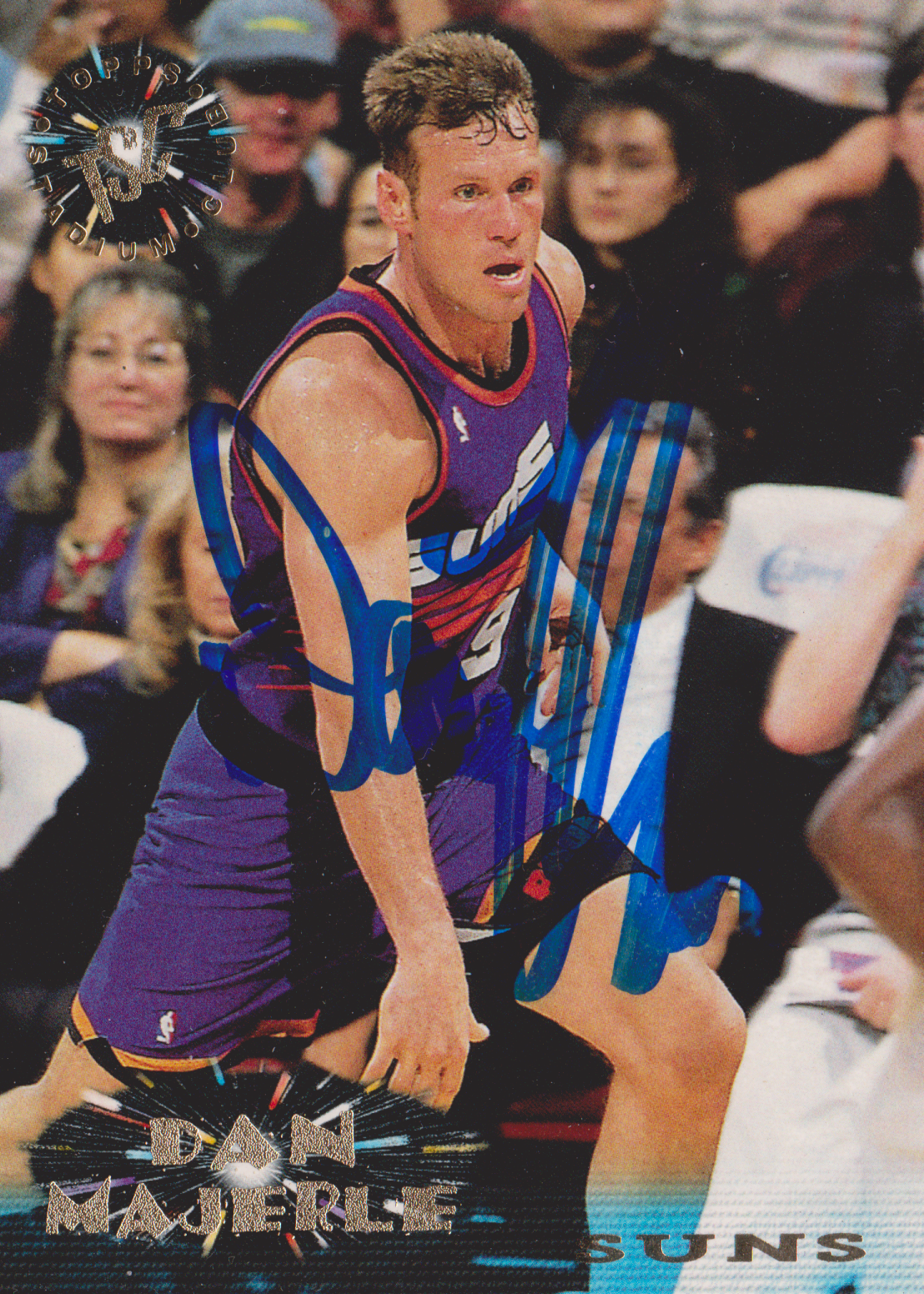 The Suns acquired Dan Majerle via a trade earlier in the season.  As part of the trade, they sent Larry Nance to Cleveland.  Nance played for Phoenix for 7 years in the 80's and was the 1984 NBA Slam Dunk Champion.  I don't remember a lot about Nance, but he had a fine career, and his #22 has been retired by the Cleveland Cavaliers. Nice card by the way.

I also got two more autographs.  These last two are of the same player.  If I remember it correctly, I think this is the player my classmates had met when we were in school.

Joe Kleine played for 7 NBA teams including 2 stints with Phoenix for a total of 5 years.  He went to college at Notre Dame and later at Arkansas, and was drafted by the Sacramento Kings in 1985 with their 6th pick (their first year in Sacramento, and also the first NBA Draft with the lottery).  Today, he is an assistant coach for the Arkansas-Little Rock Trojans of the Sun Belt Conference.

All that is cool, but the reason I was excited to get these cards was because of where he went to high school.  He graduated from Slater High School in Slater, Missouri.  Slater is not too far from where I live.  Our basketball team plays in their yearly tournament.  It was cool to find this out later on.  Slater was also the hometown of another famous person (which people my age and younger may not know, but its still cool)- Steve McQueen. So in the end I got 4 autographed cards for a total of 999 credits.  I got it mainly for a Kleine card and the Majerle card, but having the other two are nice too.  One of the Kleine cards I will give to my friend if he wants it.

That will wrap it up for today, next time I will either have some custom cards or I will show my Opening Day cards.  I will leave it up to you guys, if its split or no comments, I'll make the choice.  Thanks for reading and have a great night.