Hear my gush about a site I won a contest on

A week or two ago I nearly missed a contest.  I follow the site in question on twitter, but somehow missed their posts about this contest.  The website is known as Kings of Kauffman and I have been following them on twitter for quite a while (I think since I decided to use twitter for more than just news, so about 3-4 years ago at least).  This is how I found out about this contest.

I'm glad I was reminded because I didn't know anything about it.  So I clicked the link and found this. 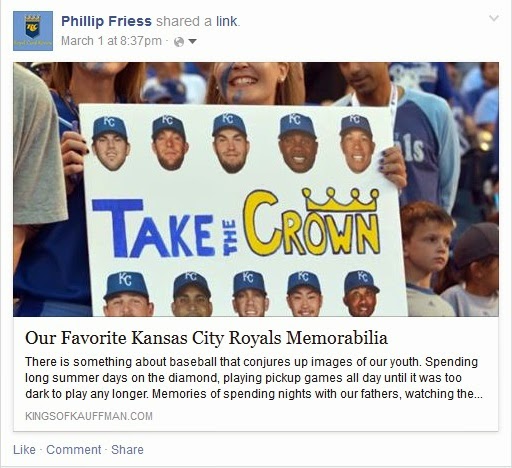 Well I found the contest link, it has the prize on it so I'll save it a bit.  The contest was simple I had to like their Facebook page and share the contest.  This post specifically.  Which talks about favorite pieces of Royals memorabilia you own.  I might post mine at a future date.  I liked the page and the next day I saw this on twitter. 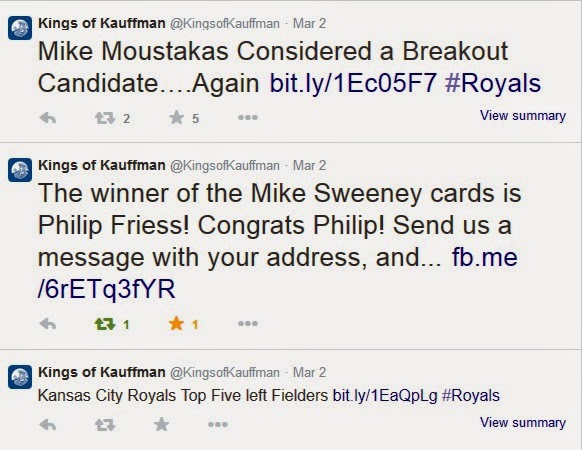 COOL! MOOSE IS A BREAKOUT CANDIDATE!  Wait, below that.  I WON!  So headed over to Facebook for all the info and to set it up. 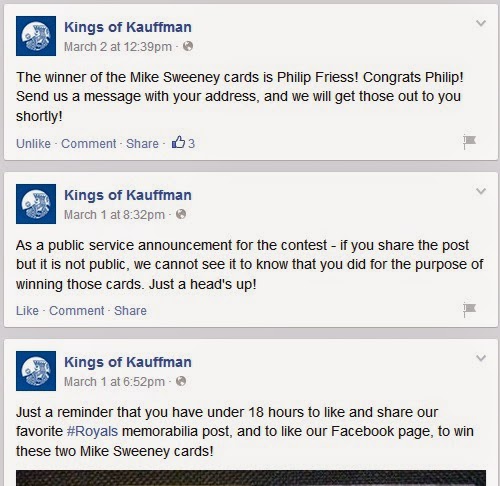 So with all that I got the cards in the mail yesterday.  Before I show them off, let me talk about the site itself.  Kings of Kaufmann is part of the Fansided series of sites.  It is one of the most informational Royals sites around.  You really should take the time to check it out.  You can read all about the hot talk about the Royals today.  Salvy will catch everyday until the end of time, Royals won't face Chris Sale on Opening Day, BEES!, and more.  At the least if you are a Royals fan or even a baseball fan, you should follow their twitter and/or Facebook pages to keep up on the latest news.

So now its time to show what I won.  As described above, it was TWO Mike Sweeney cards. 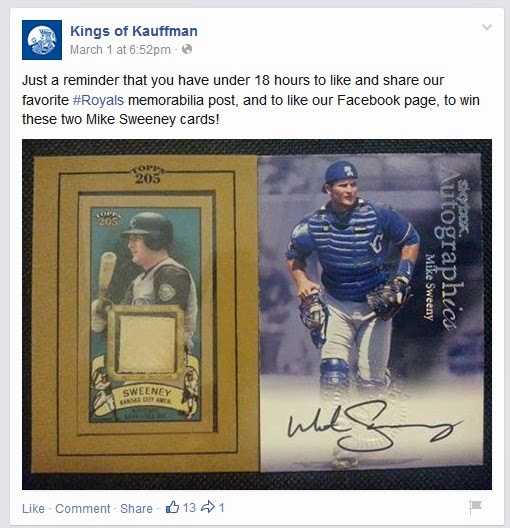 Mike Sweeney was just announced to be inducted into the Kansas City Royals Hall of Fame, and so these two beauties were given away.  I was going to scan a pic myself, but since they posted them, there is no need to.  A piece of bat AND an autograph!  That is so cool.  I was a big fan of his and now I have his signature. It's nice to see the signed card is one of him as a catcher too.  There are a lot more catcher cards of him than I originally thought.

So far in 2015, I have really been blessed by the cards I've gotten.  I've gotten more autograph cards than I ever thought.  At some point I will focus more on getting more of them, but I will still be happy when I can win or find some cheap.

Well, that's enough gushing for one day, but before I go, I want to mention a contest you can enter.  Red Cardboard is running a "mini-contest" that you should check out.  He has a nice mix of cards to give away, a lot of Reds cards with names like Joe Morgan and brands like Topps, Bowman, Kellogg's, Hostess and such.  Even if you aren't a Reds fan, he has some other cards included too.  Names like Lou Brock, Roger Clemens, and quite a few more.  Check out the link for more info.  I'm not entering the contest (I think I'll let someone else try to win), but I do like to promote contests when I can.  Furthermore, if you've never checked out the blog, you should follow it.  I admit I'm not a big Reds fan, but the posts are really good.

Okay, I hear music so that must mean I need to wrap it up.  Thanks for reading, check out Kings of Kauffman, and follow them on their various platforms across the interwebs, and thank you for reading.