I probably have enough cards to show for two more posts, but I'm just going to finish it up tonight.  I've spent enough days on them so let's begin.

We start with 1994 Collector's Choice.  I always said that 1994 was my favorite year in cards.  There wasn't a whole lot of sets I didn't like, and the prices were still cheap.  I was 12 at the time, so it was still sets from my childhood.

These are all nice cards, and all solid players.  My favorite in the bunch is the Vince Coleman card with the Appier being a close second.

We have more from the set though-

We have players sliding!  Some of them even look like they know how to run the bases. Maybe they can be advisers to the 2014 squad.

We also have players in all positions.  I like the Keith Miller card because it gives me the impression that he made a great stop and an amazing throw to first to get the runner out.

We have other sets though too! 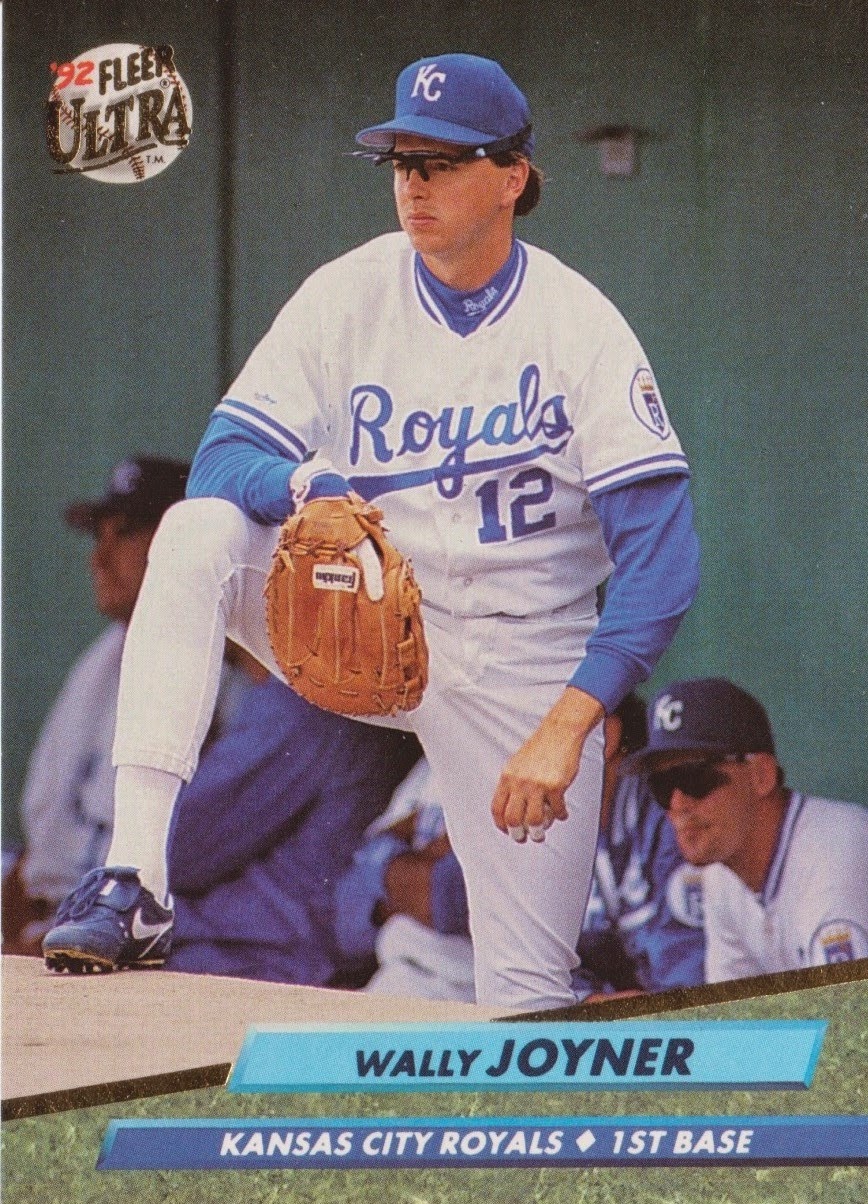 It's a 92 Fleer Ultra with Wally Joyner wearing those dumb shade glasses.  I am inching closer to completing this set, just today I got a couple more cards from this set (I might have completed it with the Rico Rossy card).

I always hated those shades the ballplayers wore in the 90's.  I know that it was before Lasik surgery and all that and I know that the sun was probably a pain to look up to find the ball, but as someone who wears glasses, I hated those things.  I had some clip-on sunglasses before and wore them for about 20 seconds.  They were corny and didn't help much.  I'm so glad you don't see them as much if at all today.

Ok, what else do I have?

Here is another 1994 set, this being the Leaf variety.  I can't remember if I got these the year they came out or if I got them later, but I did like them.  A bit much on the border on the bottom, but I'll take it.  I remember seeing Jose Lind and Felix Jose play in a game I went to once.  I should look up when that game was, it was my first Royals game.

Alright, what do I have next.

2001 Donruss is a set I don't remember having.  I'm not sure if I like the design much. Too much graphics on the card takes away from the pictures.  Plus I wasn't a fan of the darker blue uniforms.

Another Chico Lind card.  He seems happy, that or really scared.  Next to him is Rico Rossy.  I started the month with ZERO Rossy cards and now I have two.  Things are looking up.

I like the last two cards, even if Cone is smiling just a bit too much.  I like the design, but I think I am ruined by photoshop, those backgrounds look a little too good.  Still nice cards.

I will finish with a mixed bag.  The Naturals are the Royals Double A affiliate and Brooks Pounders has one of the better names in baseball.  I was thinking of getting a jersey of one of the Royals minor league teams, but couldn't decide between the Naturals or the Omaha Storm Chasers.  I have already decided it won't be the Idaho Falls Chukars.  Possibly the worst name in minor league baseball.

I bought 3 Gypsy Queen cards, George Brett was the only Royals one I got.  I'm still not a big fan of the design, but it was cheap enough.  I do like the look of the Roberto Clemente card though.  It was also cheap.  The other card I got was Ozzie Smith.  I am planning on thinning out my Cardinals collection at some point, but Ozzie and Pujols are two players I won't get rid of.

That wraps up my 180 cards from Just Commons.  I didn't show them all, but I showed off enough.  I hope you enjoyed seeing them these past few days, and I have got a few more packages this past week I am ready to show off.

Thank you for reading and have a great night.