Last month I decided to explore the possibility of starting a blog based on my collecting.  After posting for most of last month, I have decided that I will indeed be continuing this blog (if you remember, I set a September 1st deadline to decide).  One of the features I mentioned I would be doing is my Card Hall of Fame.  You can click on the menu above to learn all about it and who has been inducted so far.  I decided not to do too many posts about it, but at most twice a month (three if I'm pressed for a post or see a card I immediately want to add), but at the least, once a month.

Since it is the first of September, I decided to do another Hall of Fame post.  Since my blog pertains to a lot about the Royals, I decided I better stick to them on this one.  When I was deciding who, I was thinking of maybe Eric Hosmer since he was activated today, or maybe a minor leaguer who was added to the 40 man roster.  Instead I decided to go with MR. ROYAL!

That's right when you think of the history of the Kansas City Royals, almost everyone will think of one man- Ron Mahay  er... GEORGE BRETT!  I have a pretty healthy collection of Brett cards since I started collecting again, and some I like more than others.  Here are a few I like:

I am a sucker for oddball and product cards.  I got the Purina one earlier this year, and its one of my new favorites.  Next to it is a card from Post Cereal.  I don't remember the yellow border cards, but loved these cards growing up.

Next to it is a Studio card that has a really nice design.  Too bad the KC in the background wasn't embossed, that would make it even better.  The last one is a more recent Donruss Threads card.  I like that they used an older photo with him in the old style jerseys.

While all of those stand out to me, none of them quite make it into my Card Hall of Fame.  They all could at a future time, but I have others in mind I would add before them, and I'm not sure how I will place rules on having a player inducted multiple times.

THIS IS THE CARD MAKING IT INTO THE HALL OF FAME! 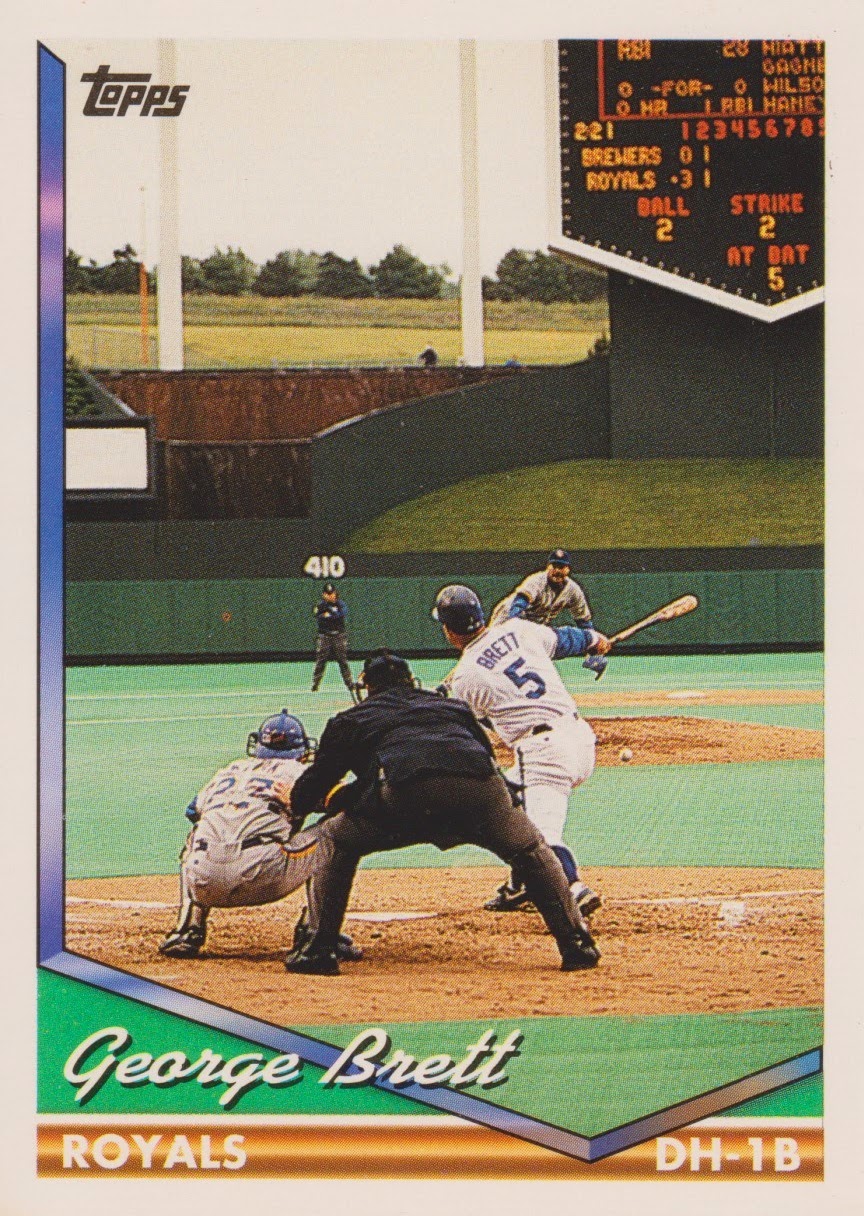 I love so many things about this card.  First and foremost, I remember it from when I was a child, so when I got it after I started collecting again, it reminded me of my younger days when I never really got to see them on TV much, which is why I rather hear it on the radio.

I also like this card because the 1994 card would be his last regular card in the set after he retired at the end of the 1993 season.  Back then they didn't keep putting players in every year after they didn't play anymore, and it felt right.  Occasionally they would insert one here or there, but not every year.

Looking at this card also reminds me of when Milwaukee played in the American League and played Kansas City often,  Much like how the Seattle Seahawks were divisional rivals of the Kansas City Chiefs until they switched leagues (or conferences as it in in the NFL), I would follow all the rivals of the teams.  Once the Brewers moved to the N.L., I stopped following them at all.  It is nice to have a reminder of this.

The picture itself to me is beautiful.  While it should focus more on Brett himself, the photo is really showcasing the Stadium. You can see the fountains in the outfield, the grass beyond the wall in center,  and the old look and feel of the scoreboard.  You can see the count was 2 and 2, and the Royals had the lead in the bottom of the second.  It not only paints the picture for you, it also describes some of the game play for you.

What I also love about the back is that unlike most of today's sets, they show complete MLB stats.  On the 1994 set, they also would write a bit about the player too if space was available.  Since George played so long, his stats is all they could show, and all they really needed to.  Since he never played again, these were his entire stats, so no need to go online to look them up.  The man won 3 batting titles in 3 different decades!  Almost hit .400!  Even as he was getting older still tied for the league lead in doubles.  At age 40 he still played in most of the games.  He would have more than likely been able to do the same if he played in 1994, but I'm so glad he didn't.  He went into the MLB Hall of Fame with Robin Yount and Nolan Ryan, and everything was perfect.  Plus he didn't have to worry about the strike in 1994, so he got out at the right time. 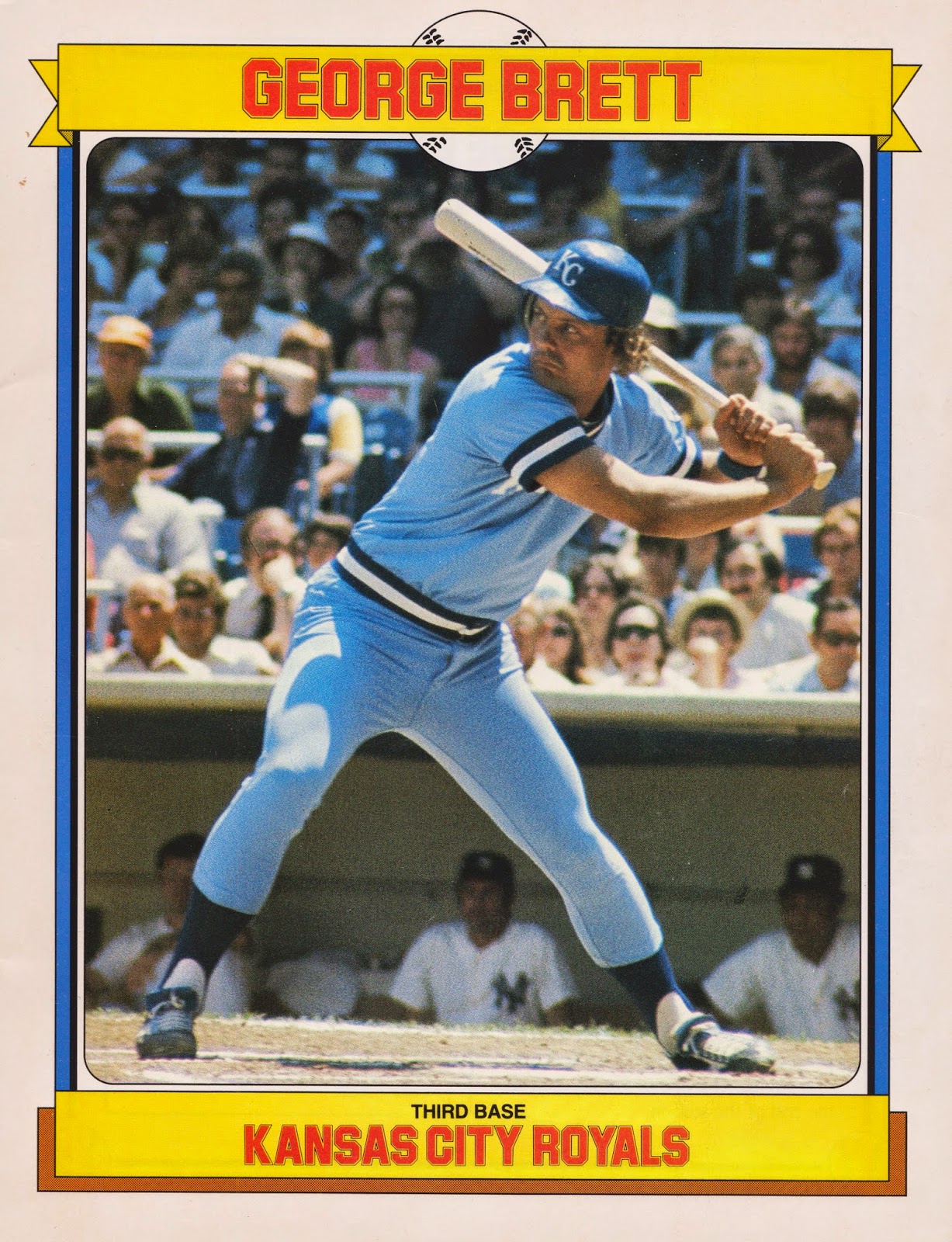 Congratulations to the 1994 Topps George Brett card for being inducted into my Card Hall of Fame!

Thank you to everyone who reads my blog, and have a great day!