A couple days ago I got a package in the mail I was waiting anxiously for.  I bought roughly 180 cards from Just Commons a week or two ago and couldn't wait to open it.  I love buying cards from them since they are cheap.  The only gripes I have with them is that it takes a while for them to process orders (which for the most part I can overlook due to how cheap their prices are on the common cards). The other gripe is that I've placed 3 or 4 orders in the last year and every shipment has had one card wrong.  They just send me the wrong card.  Usually its the same number but the wrong year.  Again I can live with that because the prices are cheap enough, and on top of that, the card they give me isn't a crappy card (as I will show off in a bit).

The next few days I will showcase some (or most) of the cards I got, scattered over the next few posts.  Today I will show a couple team sets I was able to complete and the card they messed up on.

*Editor's note:  I scanned the pictures after I wrote this, so please excuse them being a bit out of order.

Lets begin with the 1991 Topps Traded set. This was an easy Royals set to complete as it only had 3 cards.  First up is Mike Boddicker.  Nothing much to say, this was Mike's third team in the majors (his first two were the Orioles and the Red Sox).  According to the back of this card, he threw his 1000th MLB strikeout in 1989.  Impressive!

Next up is Kirk Gibson.  I collect  Kirk Gibson cards, but have thought about phasing them out as I collect more Royals cards.  This one won't be going anywhere though because I need it.  This card has potential to make it into my Card Hall of Fame at some point.  I mean look at his body language, he's probably thinking "Two years ago I was in the World Series, now where am I?"  Gibson's home run against the A's is still one of my favorite sports moments in history.  I need to get more Gibson cards in Royals uniforms.  Maybe he will be more excited in them.

Finally is Hal McRae.  I have a few of his cards (and got a couple more in this shipment).  I always liked Hal and thought he was a good manager.  He also gave great interviews.  While today's Royals manager is complaining about attendance, Hal would get mad and throw phones.  Kansas City deserves that kind of spirit in the dugout. 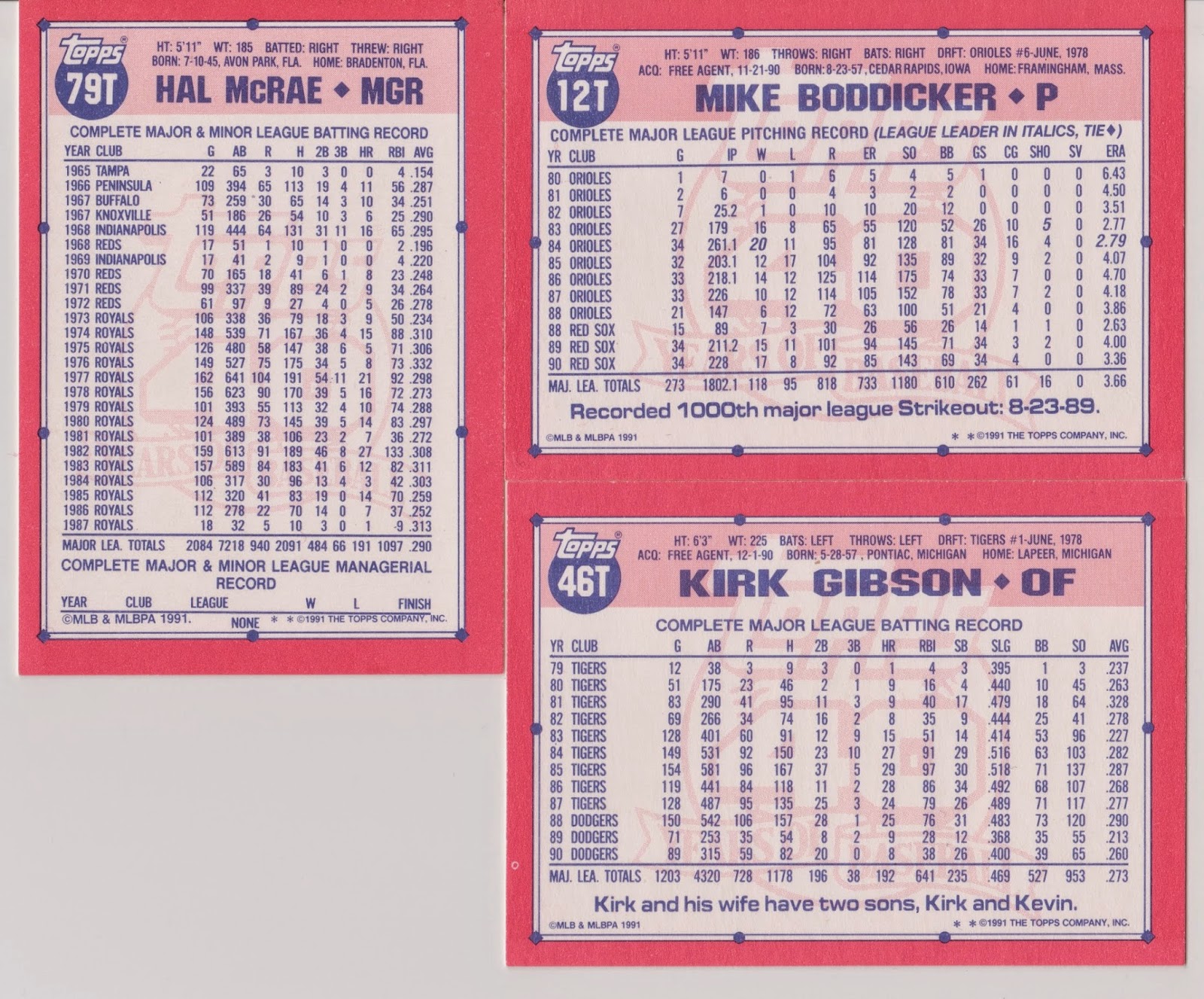 The other team set I will show today also only has 3 cards.  I should try to complete more 3 card sets.  This one is the 1994 Score Rookie & Traded set.

Before I begin, let me say that I loved the 1994 Score set.  I loved the black border, and it is in my top 5 favorite sets of all time.  Score decided to make the Traded set something totally different.  While I like the design, they should have just used it for the 1995 set and not for a update series.

Ok, first we have Vince Coleman.  Since growing up in the Midwest, the Cardinals were shoved down my throat (and still are to be honest), so I already liked Coleman before he came to Kansas City.  I also liked him because he shared the last name with a robot on Base Wars my friend and I would always intentionally hit.  After a while, the robot would explode and one of us would say "You blew up Coleman".  Ahh childhood memories.  Where was I?  Oh right, Vince Coleman.  I wish they would have zoomed out a bit more.  Who's to say Vince isn't sliding into third but instead trying out a Slip-N-Slide?  I don't see a base to prove otherwise.

Next is Dave Henderson.  I like this photo to be honest.  What is amazing is that this card uses 3 different photos of Dave in Royals garb, I guess its their way of proving he was a Royals player.  At least they used the best picture for the front.

Finally here is Billy Butler circa 1994- aka- Bob Hamelin.  At least Billy has had a few more successful years.  I was a big fan of Hamelin when he reached the majors, maybe because like me, he was husky and wore glasses.  Looking back he looked more like a bad guy in a 1980's made for TV movie.  Maybe he would have had more success at that.  I still like Hamelin now, but I won't be shy to say he was one of many who didn't pan out like the Royals had hoped.

I like the backs of these cards too.  They have stats, and a short bio, and even pictures.  There is no wasted space.  I still think this design should have had its own year instead of just being a Update set.  If it was produced today, this would just be a variation set.


I mentioned I was sent the wrong card at the beginning.  I was supposed to get a 1995 Collector's Choice- Silver Signature of John Dettmer.  For those wondering why, it is because he was a Missouri Tiger at one point.  Anyways who could be upset when they sent this card instead- 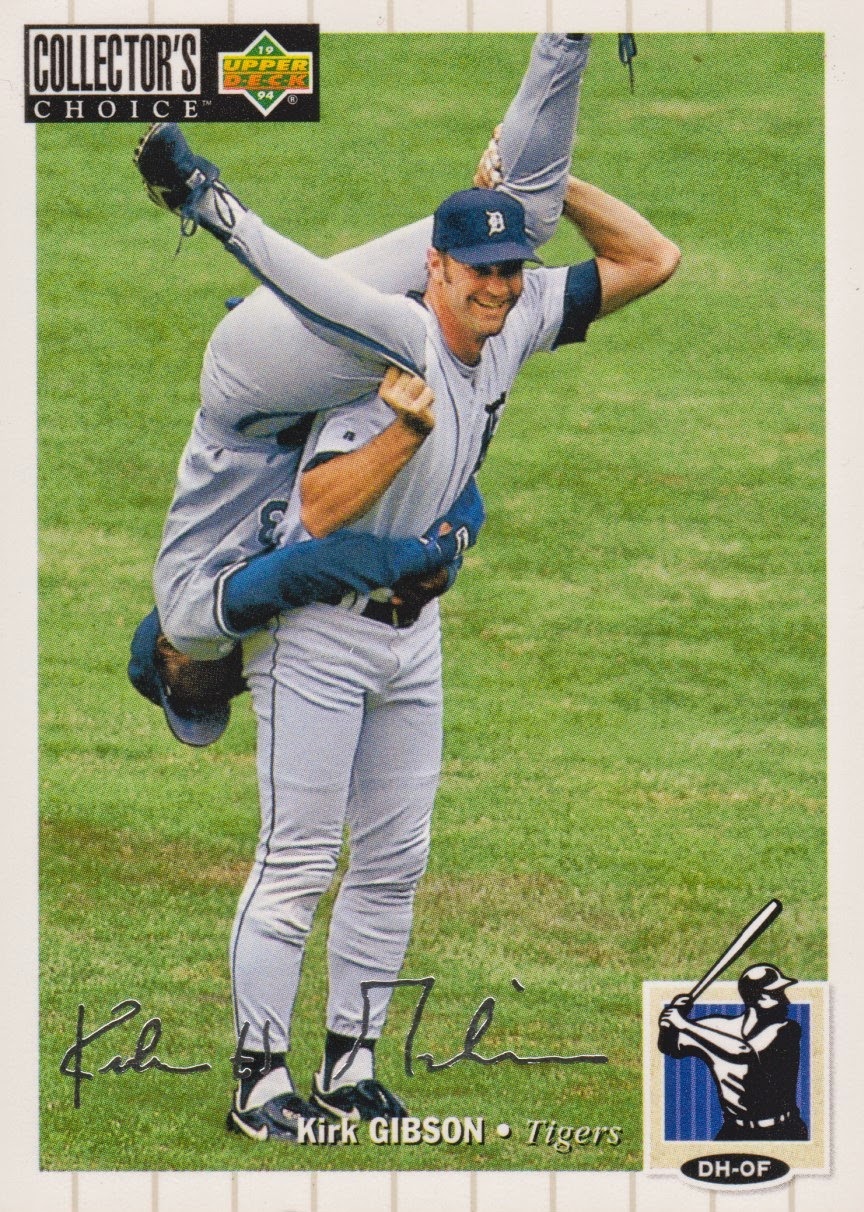 Yep, another Kirk Gibson.  To their credit, they was only a year off, and I won't complain about it.  This card is awesome.  It not only will go into my Gibson collection, it will possibly be added to my Card Hall of Fame collection by the end of the year.  What is going on in this picture? 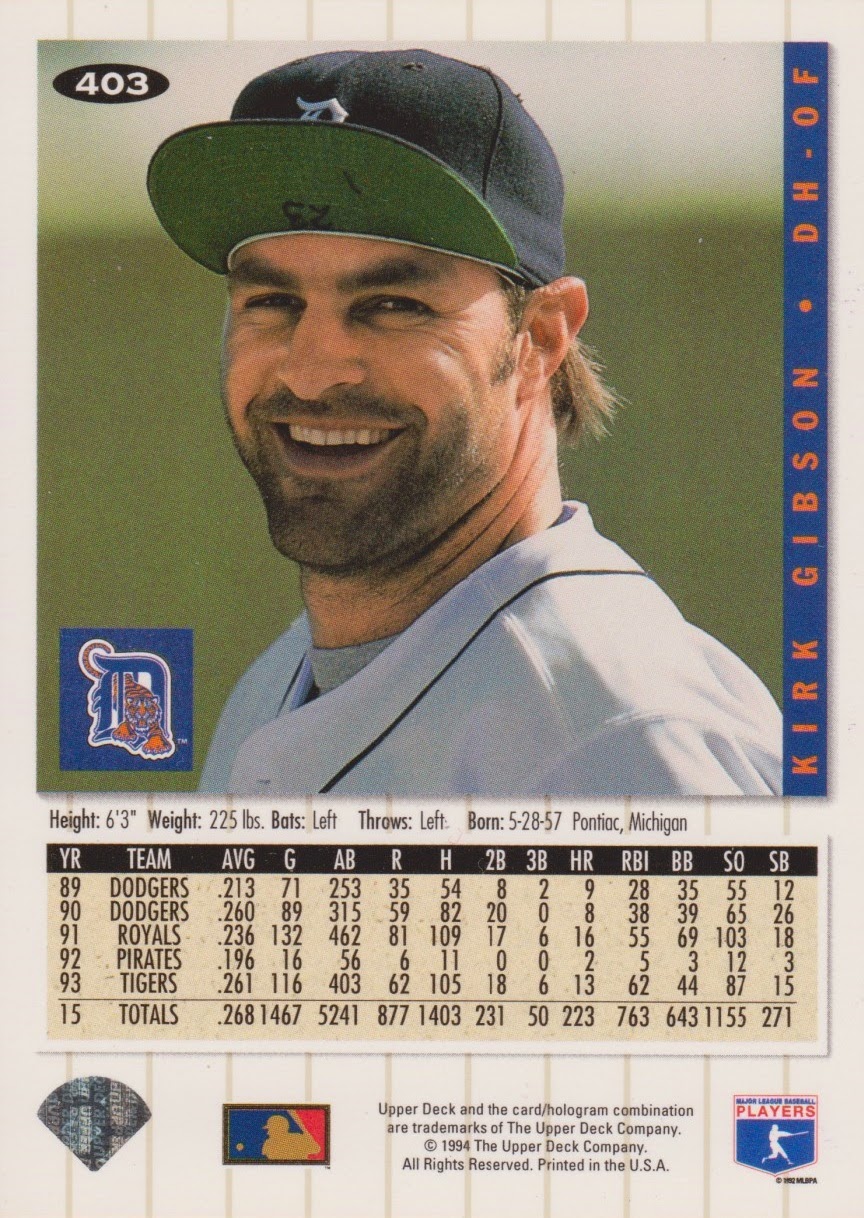 Even the picture on the back seems oddball.  Is his cap brim turned up?  It looks like he has totally forgotten about his year in Kansas City because he's smiling.

So that wraps up part one of what will likely be a few posts.  I was able to complete two other team sets with this package (each with more than 3 cards), and I'll show them off next.  Thanks for reading and have a great night.