I almost forgot to write a new blog tonight, but luckily I'm in the central time zone so I have some time left before the stroke of midnight.  I've got a few items in the mail from Listia that I can't wait to show off next week, but in the meantime I still have some Just Commons stuff to show off.  Now complete sets this time, but I have gotten closer to completing sets.  I need to make a list of what I need.

Anyways, lets look at some cards.

Let's start off with a bang!  These are 2001 Fleer Tradition cards, which I was a fan of when they came out.I like them even more now.  They have a vintage feel to them and to me personally, have a better design than any A&G or Heritage sets of today.

Rey Sanchez spent almost 3 whole years in Kansas City.  The first two years he put up good numbers.  I liked him during his time as a Royal.

I've touched on Randa in previous posts, so you know how much I like him.  This was in the middle of Joe's second stint in KC after spending time in Pittsburgh and Detroit.  Another solid player the Royals had during some very bad years.

Mike Sweeney is a fan favorite and still is in Kansas City.  Last I heard, he was an ambassador to the team, which I have no idea what that means.  Usually he is sitting in the stands watching the game.  I wish I had that job.  Mike was an all around nice guy and it hurt when he was more or less run out of town, but the truth is, it was time to cut him loose. Baseball is a game, but it is also a business.  Financially it made sense to let him go.

Speaking of letting go, these bottom 3 players had they stayed in Kansas City, could have created a dynasty.  Next to George Brett, Johnny Damon will be my favorite Royals player ever.  I continued to root for him even when he went to teams I couldn't bear to watch. I only wish he was able to get to 3,000 hits.

Carlos Beltran is another player I rooted for as he made his way from team to team.  It really stung in the offseason when he opted to sign with New York instead of coming home to Kansas City, but with the year he had, I am glad he wasn't on the payroll.  I wish him the best of luck wherever he plays and for how long, but I do wish to see him in Royal Blue one final time.

Jermaine Dye I liked when he was in KC, and even in Oakland.  I kinda stopped rooting for him when he went to Chicago, but was happy he won a World Series ring.  I'm a bit surprised he didn't last long in MLB, but he still had a solid career. 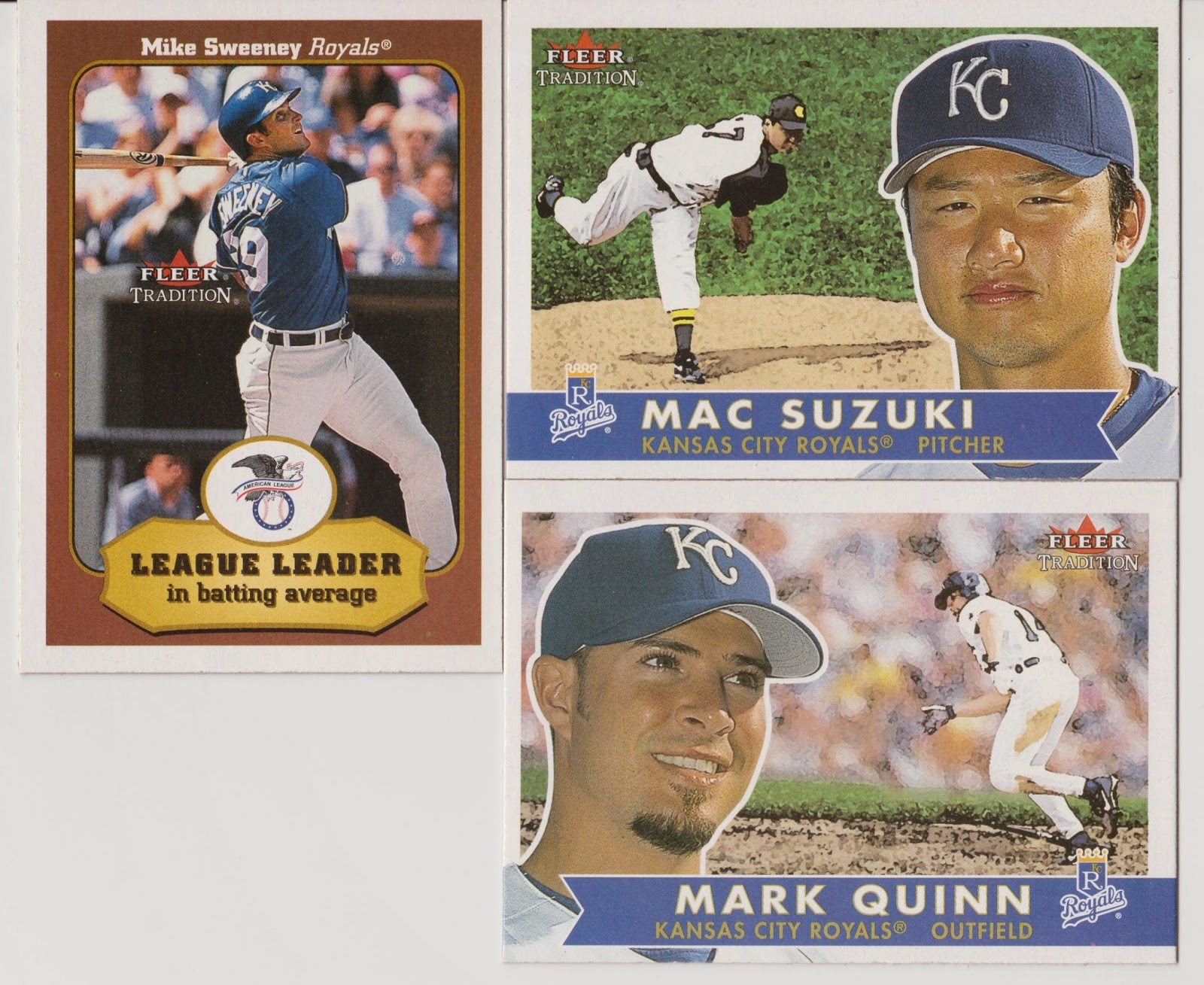 This Sweeney checklist card doesn't fit into this set.  It looks nice, but it just seems out of place.

I don't remember anything about Mac Suzuki's stay in KC other than the fact that I remember him being there.  I liked him, so it was cool to get this card and remember him again.

Mark Quinn was the odd man out in the outfield in the early 2000's, but he did have flashes of brilliance.  When it was his turn, he couldn't show those flashes consistently enough.  I wished he reached the levels of  Dye, Damon, and Beltran, but sadly he didn't.

Let's look at another set I got some cards from, we will look at some 2014 Donruss. 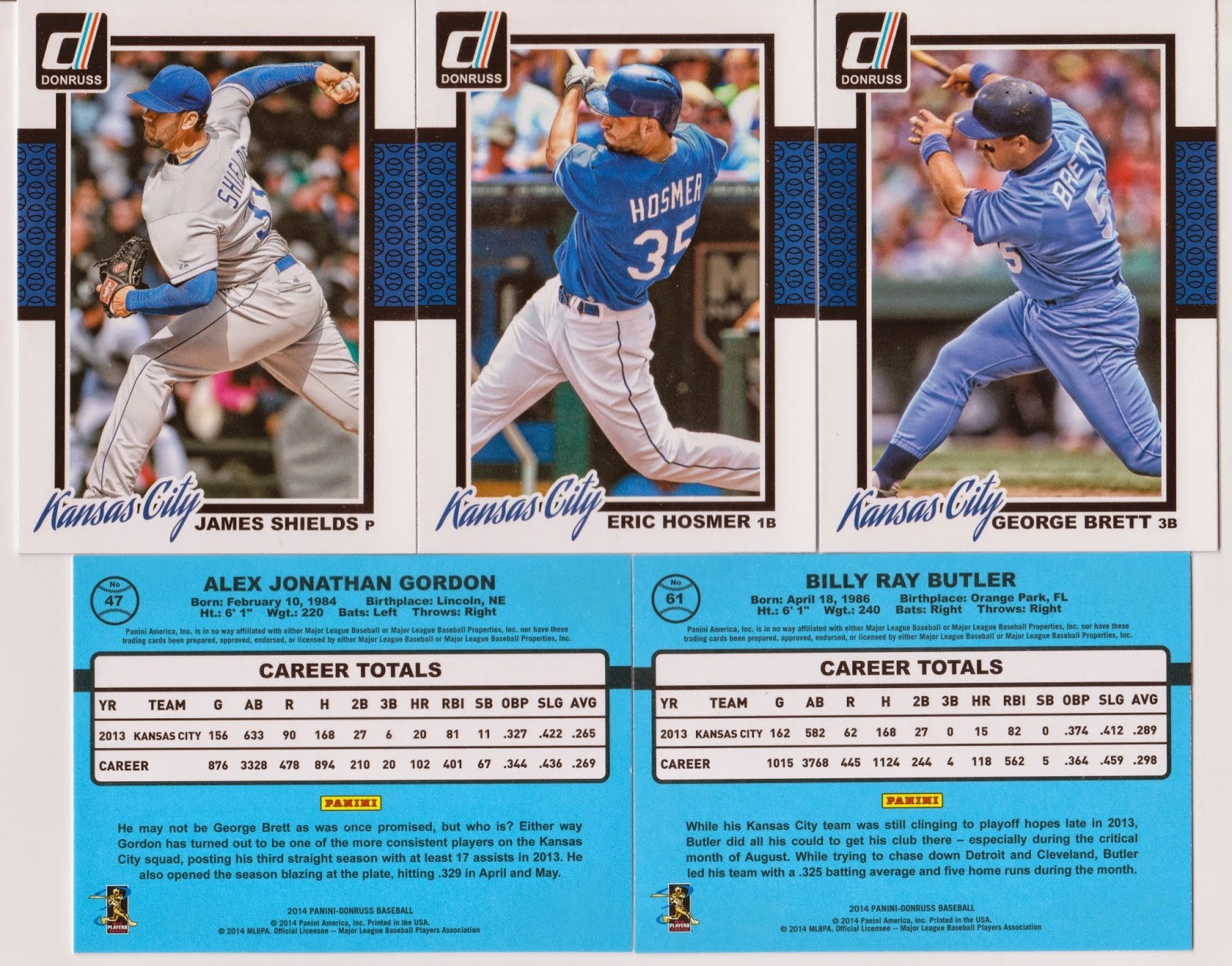 Since I'm not much of a fan of non-licensed cards, I don't think I bought any packs of 2014 Donruss, but I admit I like the design.  It is nice to see some cards of "Big Game" James Shields in a Royals uniform, and Panini did a decent job of making the shot so they didn't have to touch it up too much.  I like this card.

The Hosmer card next to the Brett card is interesting because it looks like they have the same swing.  It makes sense because for a short time in 2013, Brett was the hitting coach.  As a result, Hosmer really improved at the bat.  Hope it rubbed off enough so he can keep it up.

The Gordon and Butler cards are used to show the backs.  I could do without the Panini logo in the middle and the font is a little blah to me, but otherwise its very nice.  I may have to check this set out next year.

I had another card I ordered from this set too, but it wasn't in stock.  However, these four suit me just fine.  I wasn't born until a year after these cards came out, but I know these guys are legends.  I can't wait to finish this set up, and to be honest if I do, I don't know if I'll go after the Topps set.  They are more or less the same, but if I can get a good deal on them, I'll check them out.

I think I will stop there tonight.  I'm a bit tired and have a full day of sports to watch tomorrow.  I was thinking about going to the Mizzou game, but I decided to stay home and catch it on TV.  I do hope to make it to at least one more game this year.  I would like to work one of the games.  I have worked at least one game for the last 4 or so years as a program seller.  It's not a hard job and I can watch some of the game for free.  I might work the homecoming game just so I can make some easy money.

Sorry, I'm rambling, I need to stop.  Thank you all for reading, have a great night, and a great weekend.