I got lots of Montgomery's but no Gentry's

After a good nights sleep the agitation of Saturday is gone and the day is anew.  Now it is nightfall and My Royals won today, and so did the Chiefs.  Things are looking up.  I also won a couple auctions on Listia, so I can't complain today.

I figured I would show off more cards from my massive Just Commons package I got and as the title implies, I got a lot of Jeff Montgomery cards.  The Gentry part was just because I needed a title and couldn't think of anything else clever.  I once saw Montgomery Gentry onstage about the time they were starting to make a name for themselves.  I was at a festival and as we were leaving, they just hit the stage.  I stayed for an extra 20 seconds just to say I saw them.

Anyways, lets look at some cards.  I have other cards too, so if Jeff Montgomery isn't someone you're interested in, scroll down a bit more. 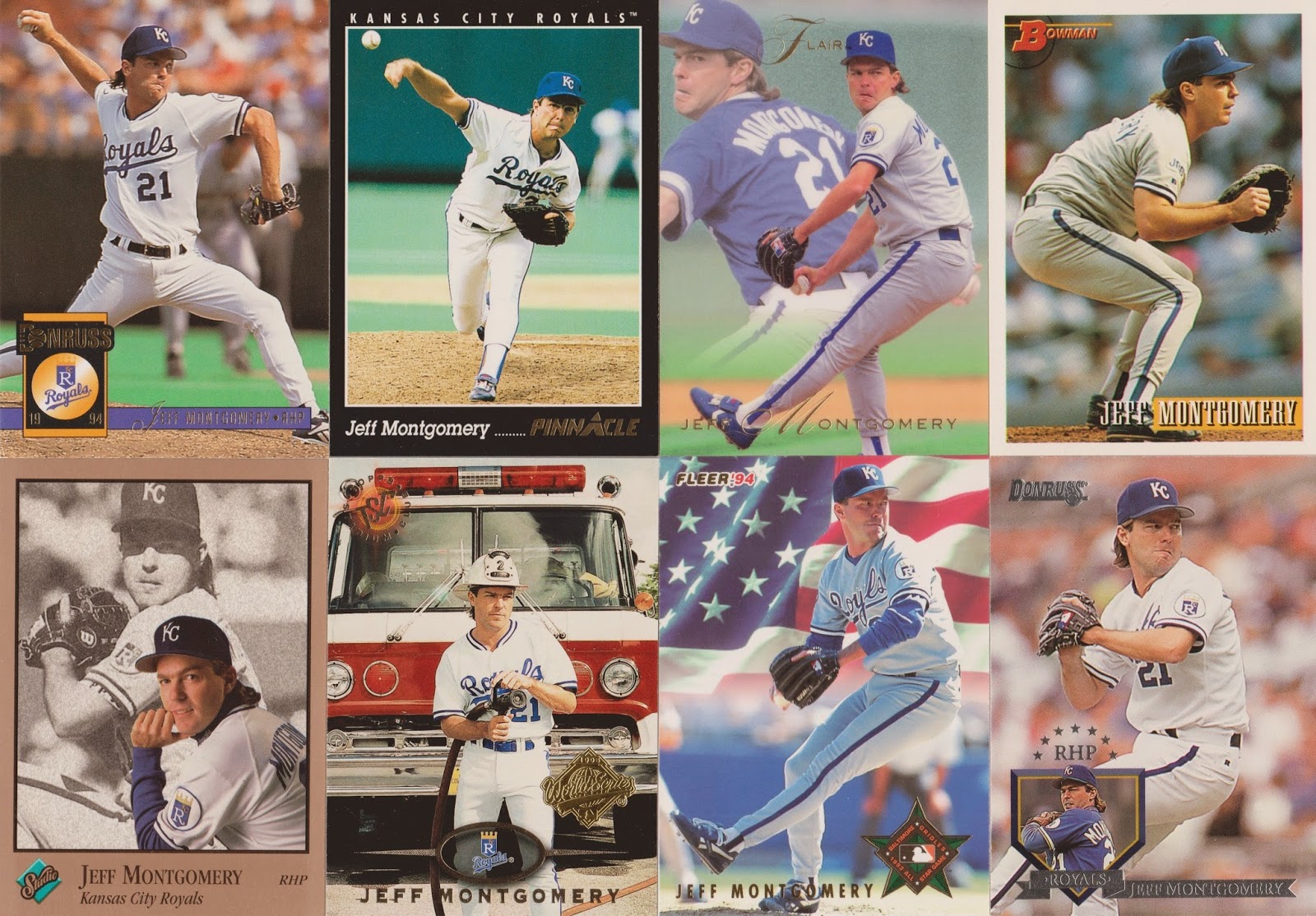 I don't remember this particular Donruss set when it first came out.  I think it was 1995 and my main source of getting cards at that time was my dad and uncle, and the 1994 strike left such a sour taste in their mouths, they stopped collecting.  It would be a year or two before I would get cards again, so this one is new to me.  If I had it when I was younger I would be in love with the set, but as it stands, its okay.

Next is Pinnacle.  I like this card, not just because of the black border, but because it has a nice photo.  I didn't get a lot of Pinnacle cards growing up either.  Topps and Score seemed to be the cards for sale around here, and there wasn't too many card shops around.

I'm not too fond of the Flair card, but I got it because I didn't have any and I didn't see a picture of it before I got it.  It was cheap enough, so I did alright.  I think I would like it better if it didn't have the second photo in the background.

This Bowman card I thought I had.  It looks very familiar to me, maybe I had it the first time I had a collection.  Anyways, since Bowman wasn't very prevalent in these parts, it always seemed special to get one. Until about a year or two ago, that still seemed to be the case, but now Bowman is easier to get.  I like the design of the card, a bit basic, but still nice.  I'm not too fond of the picture though.

The bottom row has some crazy ideas for cards.  We begin with the 80's style portrait know as Studio.  I actually like the design but it could be because I remember those portrait styles, so it brings back memories.

Next is a card I have seen a few times on other blogs, and liked enough to seek it out finally.  The idea is a bit cartoon-ish, but it was a nice enough idea.  Closers are known as firemen by some (for the record, I never considered them that, but whatever floats your boat), so they thought it would be cool to have Monty as a Fireman.  That or they planned on making a calender and decided not to and had extra pictures.  Maybe that was their initial idea.  This probably sold better.

I remember this card when it first came out and I loved it.  I'm a sucker for patriotic cards, and being a child, I loved it.  Today, while still cool, I'm not sure why it works for a baseball set.  Slapping a flag on a card doesn't really make sense unless the card is showing interaction with the player.  Oh well, I still might go after the set.

The last card is just a base card from Donruss.  I remember this card too, and I liked the design of the set.  It was a full picture, and even had a second picture on the front that didn't disrupt the main photo.  Plus the second picture was inside a shape resembling home plate.  A solid addition to my collection.

A couple more Monty's, these both appear to be spring training photos.  The first one is from Stadium Club.  I was able to get a few Stadium Club cards as a kid, and I liked how they didn't have borders.  I also liked the old Stadium Club logo.  Overall, I like this card, so I'm glad I got this card cheap.

The final Monty card has him wondering "is the mullet still an acceptable haircut?"  It's a Pinnacle card I had once, but had to get again.  I like the design, but don't have much more to add about it.

Here are some Fleer Focus cards from 2001.  We will start with the back.  I like the back, it has all the basics, and give you stats.  I think they could have added a little more writing on the back, but that's just me.

The front design isn't one of my favorites.  I don't like photos that look like they are pasted on a background.  This just doesn't work for me.  I am happy I have them as it inches me closer to another complete team set.  It also allowed me to add another Johnny Damon to my collection.

This is a 1994 Ted Williams set.  It isn't one I ever had, but noticed a few cheap cards so I got them.  The designs are all over the place, so I'm not sure if I really like them.  I thought it was odd to have both current and former players in the same set.  The Michael Tucker card really just doesn't fit in.  I do like the Frank White cards though.  I would like to add more of his cards to my collection.


OK, I think that will wrap it up today.  I have likely one or two more batches of cards from this package, then I will show off some recent Listia wins I've gotten in the mail.  I also have plan on another Card Hall of Fame to add sometime this week, and maybe even some Flea Market goodies.  Thanks for reading and have a great week.