I've been putting off a couple posts until the time is right.  I had one planned for tonight but nixed until until a couple more days.  I have another one I want to post too, but again, want to do it when it is official.  I got a couple more packages from Listia today, so I will show them off.  I have really fallen in love with Listia lately.  A couple days ago, I wanted to win an auction but didn't have enough credits.  I scoured ways to get points without paying and saw one that would get me a ton of points.  I signed up for Swagbucks, just to get the points, and now have a ton of points.  I hope to get some more stuff soon.

Anyways, let's look at the haul I got today.  I'll start with some Royals. 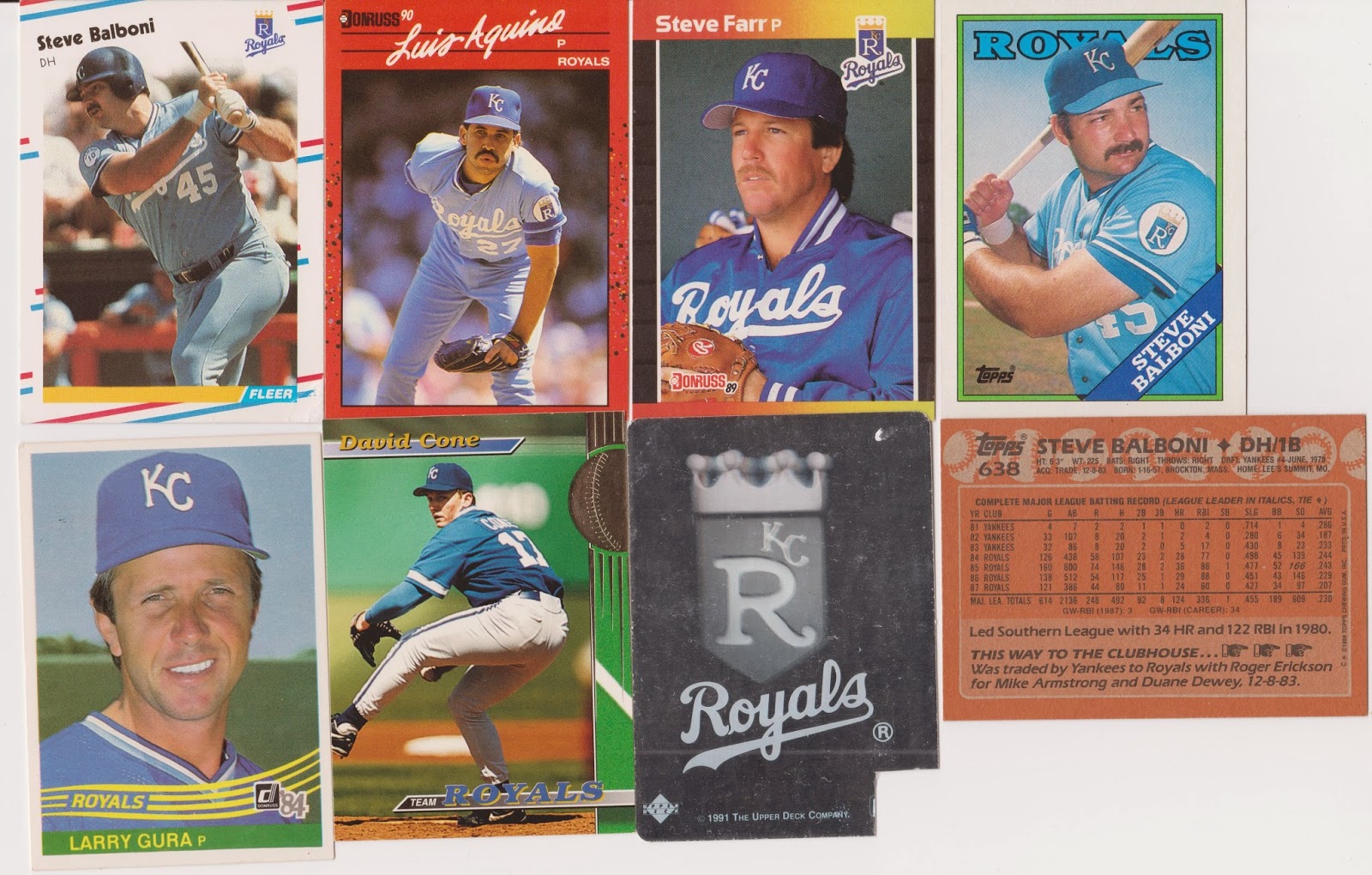 Let me start off with the hologram.  It is cut on the bottom because I cut it.  Somehow, it melted onto the pocket page and the wouldn't come off.  It was an added bonus because the guy felt bad for taking so long to ship it.  I'm not mad, because it was an extra card, and because I don't really care if I had it or not.  I have a few of the holographic stickers, but the Royals one has eluded me.

I only really wanted two cards in the batch, but it was cheap enough I got all of these (I also got a third of the Balboni cards).  The cards I wanted was the first two on the bottom, the Larry Gura, and the David Cone.  While I do plan to eventually collect the team sets, those were two I knew I didn't have yet.  I'm not sure if I have any '84 Donruss, Royals or otherwise.  The Cone card I wanted because I have started a decent Cone collection, but for some reason, most have been cards when he played on other teams.  It was refreshing to get another one as a Royal.

In total, I spent 100 points on all the cards, so even if I did have all the other cards, I think it was well worth it just for those two cards.

For the other package I got, we go across the state to the St. Louis Cardinals.  I tend to show hate on the Cardinals, but I like a lot of players that have played for them.  I think a lot of the hate grows from the fans who shove the team down my throat and the media in Central Missouri.  Granted, I know they have been the better team in the last couple decades, but I just get tired of hearing about them.  Anyways, lets look at what I got.

This package had it all.  Let me start with the card I actually won- the Red Schoendist.  I don't have a lot of his cards, but as I have been collecting more Musial cards, I have started to get more of Red.  Something I like about the card is the Cooperstown logo is strategically placed (or maybe it was luck) right in the center of his hat.  This prevents them from erasing the team logo out, and as a result, the card looks crisp.  I only paid 191 points for this one, not a bad deal at all.

I was surprised when I opened it because I didn't remember anything about other cards, but this was a nice bonus.  I like the Tewksbury card because I like the set but also because in the 90's the Royals were hardly ever on TV in Mid-Missouri so I was stuck with Cardinals.  I liked him okay, and depending on the day, I like the dark colored alternative hats the Cards wore.

Jim Edmonds was reason enough to watch a Cardinals game when he played.  I've heard stories he was also an all around nice guy in St. Louis, so that's cool.  This card is good enough to keep in my Cardinals collection for now.  I have a decent collection of Cardinals that I might thin out one day.

The Joe McEwing card is alright.  I will never admit I was a big fan of him, so this card doesn't do much for me.  I won't make my collection, but its not just some card I will throw away.  I'm sure when I start making trades it will find a good home.

I thought something else that was cool was the stamps on the package.  I have never been one to collect stamps, but a Ted Williams stamp will always catch my eye.  For about a decade or so, Boston was a team I rooted for.  It partially started in the late 90's when I felt sorry for them for not winning a World Series in 7 decades, but then in 2004 I had a boss who was from Boston.  I really rooted for Boston that year since I wanted them to win, but also since he was outnumbered by Cardinals fans at work.  We both worked the night Boston won the series.  It seemed that I usually rooted against the team everyone else rooted for in major championships.  Once I was the only worker who didn't root for the Steelers to win the Super Bowl.  My reason- the owner of where I worked (Pilot Travel Centers) had a small stake in the team.  Oddly enough, I like Jimmy Haslam and hopes the new team he owns (Cleveland Browns) does well just for him.

Before I go, I thought I would show off something sports related.  Sometimes I try my luck at scratcher tickets, and earlier this year I bought one.  Sadly I didn't win, but wanted to show it off anyways. 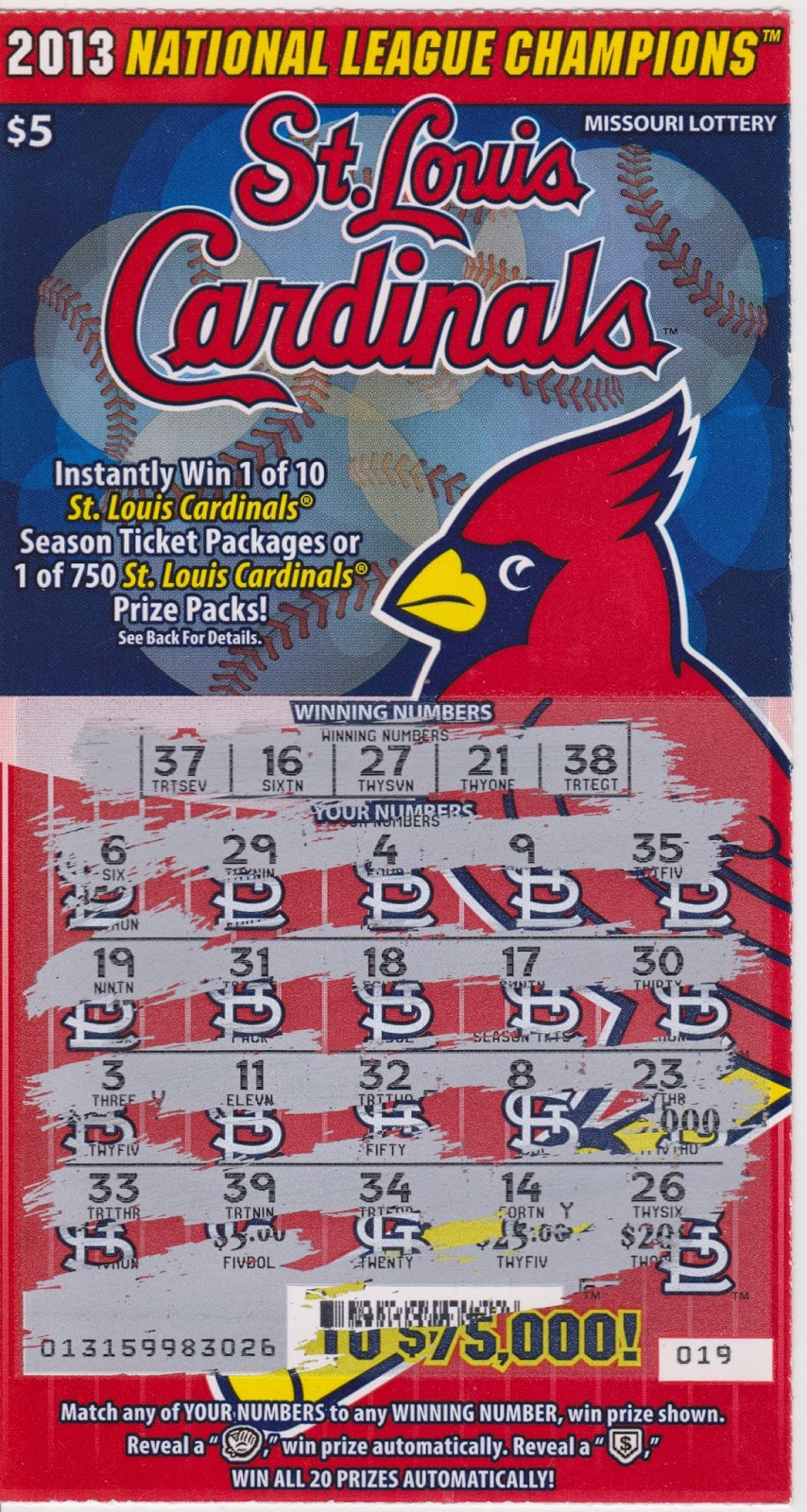 I also tried one of the Royals tickets too, but can't seem to find it.  Maybe I won on it.  Anyways, thanks for reading, and have a great night.