I miss the 1990's- the music, the movies, the tv shows, and most importantly the baseball cards.  They seemed more magical, and a heck of a lot cheaper.  Even today you can buy cards from that era fairly cheap.  Not that I needed to, but a few months ago I bought a box of Free Willy 2 cards for five bucks.  I will open the packs sometime in the future and post the results.

Today though we are back to talking about my huge order I got from Just Commons.  Yesterday I showed a couple team sets I completed, and today I will show a couple more.  Since these are bigger sets, I won't show all the cards. 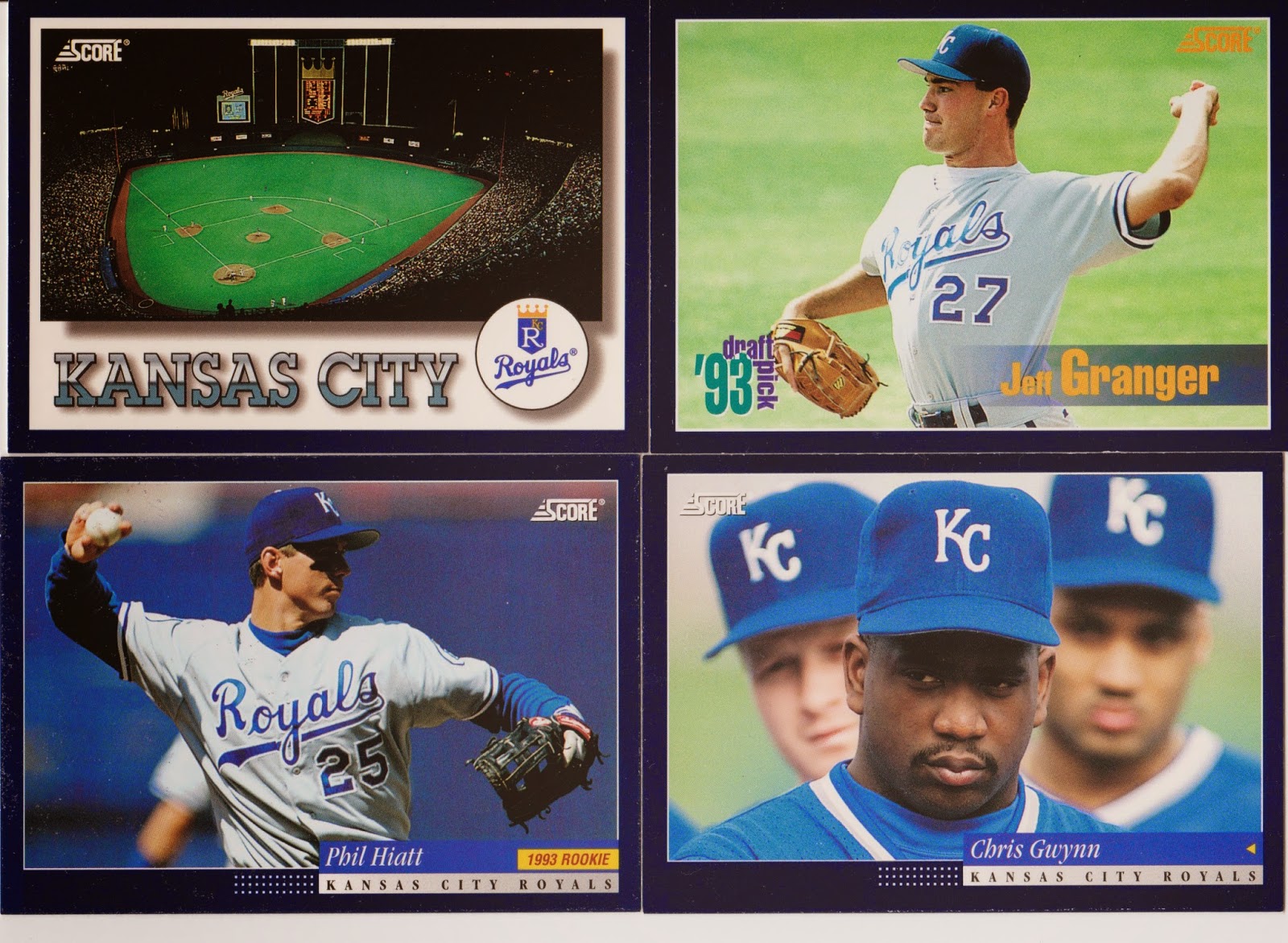 We begin with the set I told you I loved yesterday and a few other times- 1994 Score.  I am a fan of black border cards, so this one is easily one of my favorites.  They may show dings and smudges better, but to me they just look bordered pieces of art.

The first card is of Kaufmann Stadium, home of the Kansas City Royals.  Obviously you knew that, but I just wanted to reiterate it.  Maybe I still haven't gotten out of my high school days of the late 90's and like to add words to make my writings seem more full.  I'll try to stop that.  It's amazing to look at this card though and think of how much the Stadium has changed in 20 years, but looks almost the same.  I have been to the K 3 times in my life (twice in 1994, one was a rainout), and it still looks amazing.  I never understood why teams need new stadiums all the time when they could save the money to make renovations.  The Braves are getting a new Stadium soon, their old one is 25 years old.  I AM OLDER THAN THEIR STADIUM!  UGH!

Let's move on, next is 1993 draft pick Jeff Granger.  Even in the 90's the Royals made good draft picks.  They had a great farm system, they just couldn't keep them.  Much like today though, the Royals also made some sure-fire picks that were more backfire than surefire.  I only showed this card to show how dedicated I am to completing team sets.  Maybe I'm too harsh, It's been 20 years, I can't even remember if he was good or bad.  He couldn't have been as bad as Tony Coggin or some of the early to mid 2000's relief pitchers we had who couldn't throw.

Phil Hiatt!  My man!  We have the same first name... well not really, Phil is short for Phillip which is my middle name, but it is what I go by.  I'm not sure if that is the reason I liked Phil Hiatt or not.  In my remembering the 90's there are quite a few players I can't remember if they were any good or not.  That's what 29 years of not making the playoffs does- these guys are all a blur.

Now this I should remember- THE ROYALS HAD A THREE-HEADED PLAYER ON THEIR TEAM IN 1994!  Oh, wait, that's Chris Gwynn.  All I remember about him was that he was related to Tony Gwynn (I had to look up that they were brothers).  Too bad Chris wasn't as good as Tony.  According to wikipedia, the Royals traded for him and Domingo Mota and sent Todd Benzinger to the Dodgers.  Two years later Gwynn signed elsewhere... the Dodgers to be exact.  Whatever! (To the younger readers, Whatever was a big catchphrase in the 90s, I'm not hip anymore so I don't know if it is still used).

The good thing about Just Commons is the fact that I know I didn't pay more than about 10 cents for those cards.  Not too bad when I need to complete a set.  Let's see what else was in the set.

We go to the heavy hitters now.  Brian McRae is first.  I always thought he was a solid player but I'm not entirely convinced he held a job in KC for so long because his dad was the manager.  After Hal was gone, and Brian was on his own, he didn't exactly set the world on fire.

If you collect cards just for the pictures, then you should start a collection of Kevin Appier cards.  I swear, he has so many different facial expressions, its like a new one on each card.  I liked Appier a lot and in the later years I felt he got a bad rap.  His record was horrible, but so was his run support.  It seems like if he gave up one run, the Royals didn't score.  If the scored 5 runs, he would have an off night and give up 6 runs.

I just wanted to show off this Stan Belinda card.  He is putting a lot of effort into throwing a pitch that is going backwards.  Stan is another guy that is a blur to me after all these years.  I do like the patch he has on his sleeve though.

Finally we have ole Ham.  Good thing he had decent power, because as evidenced by this photo, he couldn't run the bases for crap.  It looks like he is trying to swim to first.  I'm starting to think that Score had an agenda against the Royals in 1994 to find the most candid photos they could.  At least it gives me happy memories for a mostly dismal period in Royals history.  However, if the ill-fated strike didn't happen, KC had a shot at the playoffs in 1994.

Let's start with the back design first.  I like this design.  In 2014 it may seem blah, but in 1993 this was crisp (am I saying that right, I told you, I'm not up on today's slang).  It has stats, picture, logo, and even a biography.  Can't ask for much more.  Mike Macfarlane was a fine catcher,  I think a bit underrated by league standards, but he did a good job.

Kevin Koslofski is another players that had some buzz on him but never quite lived up to it.  I don't remember him being that skinny though.  Maybe if he added some weight he could have added some more power and stayed around longer.

Greg Jefferies was a guy that I liked.  How could you not like him with him wearing those 90's shades? Seriously, I was a fan of his even when he didn't play in Kansas City.  I'm not sure if I have any other cards of him in a Royals uniform, so I like it for that reason alone.

Rusty Meachem is next.  The 90's might have been the last time we had really cool names in baseball.  Sure some cool names pop up today, but how many people named Rusty play?  At least Kansas City still has Rusty Kuntz as a coach.  Meachem on the other hand also looks really skinny in this photo.  If nothing else, you can't say the Royals were shooting up the steroids or else they wouldn't look like someone Sally Struthers would want you to sponsor on TV at 2 in the morning (sorry kids, its another 90's reference).

What else we got?

Jeff Conine had an interesting career. At least it was to me.  He was a Royal, then became a Marlin, then later on became a Royal again.  He was also somehow a MVP of an All-Star game.  I'm not sure why I became a fan of his, but I always was.

Another guy I seemed to always like was Michael Tucker.  This card seems out of place in this set, but I guess they needed a way to differentiate draft picks.  Tucker was a solid player, but as his career progressed, I started rooting for him less.

1993 would be the final set for George Brett.  He had two cards in the set.  I already had one, but I needed this one.  I would have preferred not having the background on the card, but its still a nice card.  I am having a problem now because in addition to collecting the team sets, I keep my Brett cards in another part of my binder.  I'm not sure if I should keep them as team sets or not.  The same problem comes about with my Johnny Damon cards.

Final card of the day is David Howard.  David was a very reliable player for Kansas City.  He wasn't the best, or the coolest, but the most consistent.  I have a few of his cards including a couple of his minor league cards.  I can't wait to finish more sets with him in them.

Okay, so with these last two posts, I have completed 4 team sets in my collection.  Next time I will show various cards I got that don't complete a set, but gets me closer.  Thank you for reading and have a great night.