A Flair For The Old

Don't worry this isn't another wrestling post, though I have to reference the Nature Boy whenever I say Flair.  Now that I have that out of the way, I can talk about a couple things I got in the mail yesterday thanks to Listia.  First I will go with the smaller package. 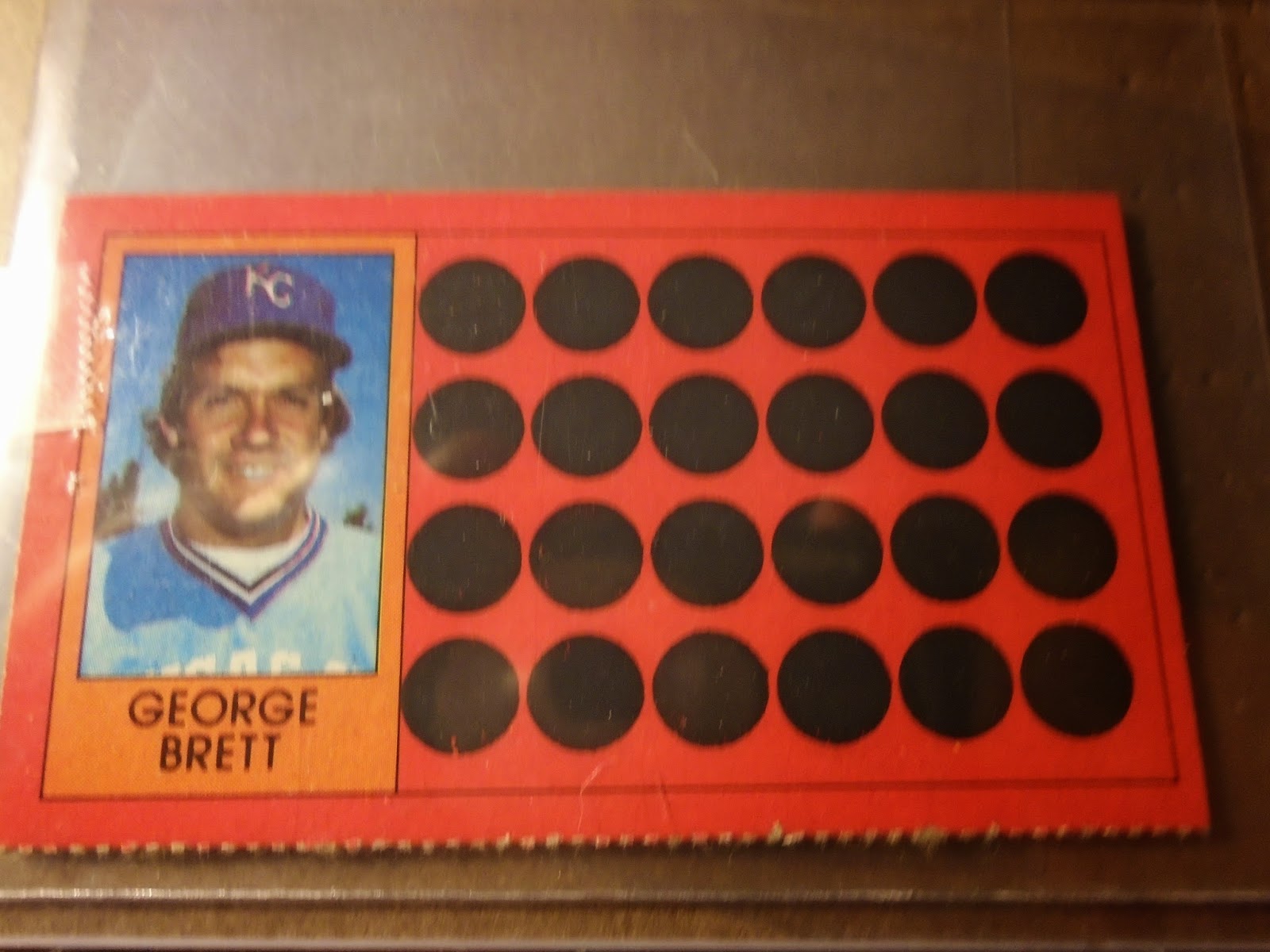 I actually had some of these my dad kept, but they were scratched off already, and I didn't have any George Brett ones.  I got this at a good enough price so I am happy.  I was watching another one that had a Brett one scratched off, and a few others too.  I was outbid and the price went too high for me.I wanted that one because of the Brett as well, but it also had an Ozzie Smith when he was still with the Padres.  It's not much of a need now, but if I find it cheap enough I may get it.

The other package I got had me a bit confused.  At first I wasn't sure if it was someone sending me something or if I won something.  Then after I opened it I saw it was a Listia win.  What confused me was that it had a bunch of cards in it.  I figured it out that the seller sent me some bonus cards in addition to the ones I won. 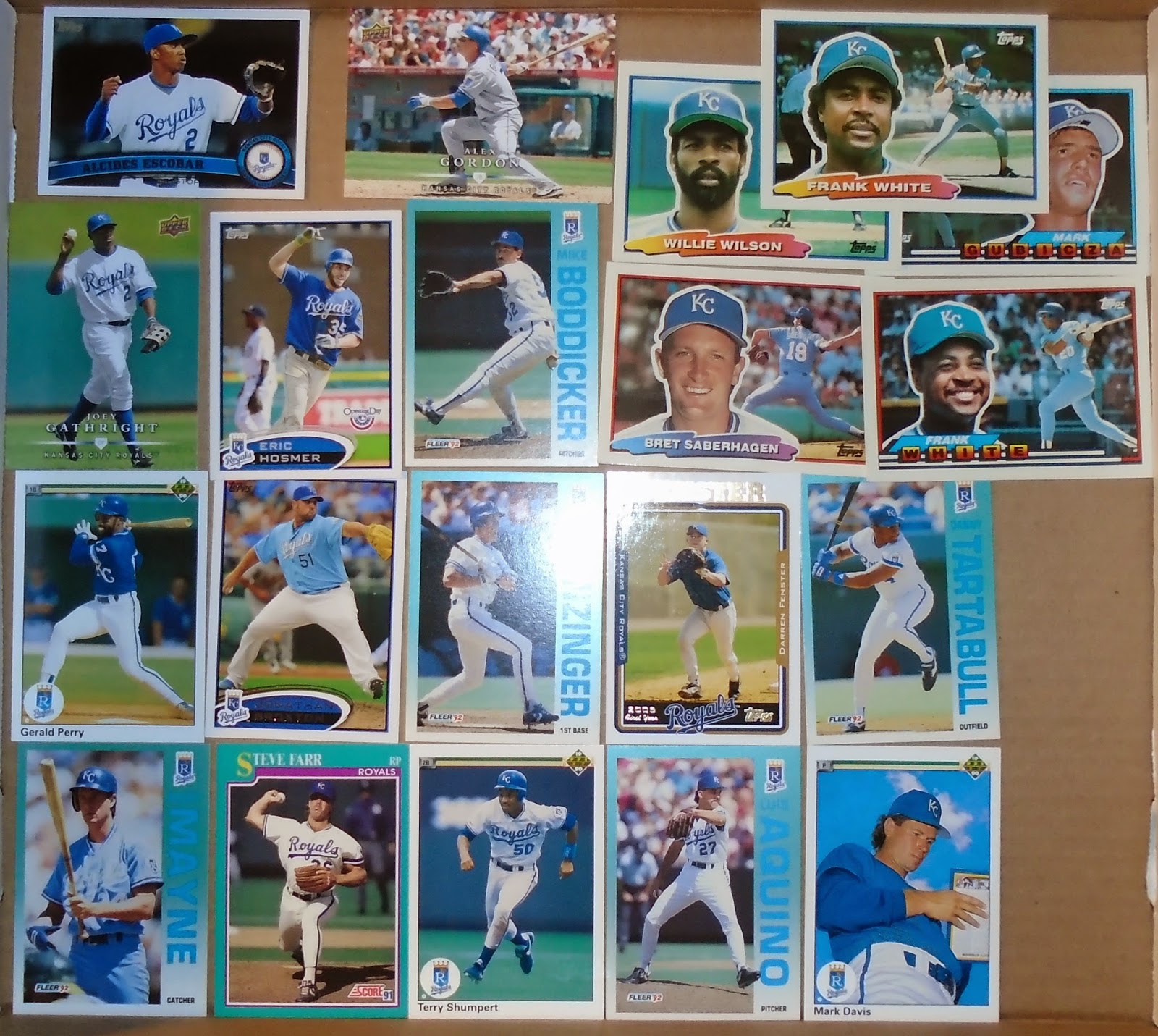 TWENTY BONUS CARDS!  Before I show you what I won, let me say this.  I won 5 auctions for a total of roughly 450 credits.  That in itself was amazing, but all with free shipping. When I saw these, as I have been known to say "it's just icing on the cake".  A mixed lot of 90's goodies, off hand I knew I needed a couple of these at least.  The Topps Bigs cards were ones that I never cared to collect but I am close to completing the team sets.

Okay, if that was the icing, then let's look at the cake. 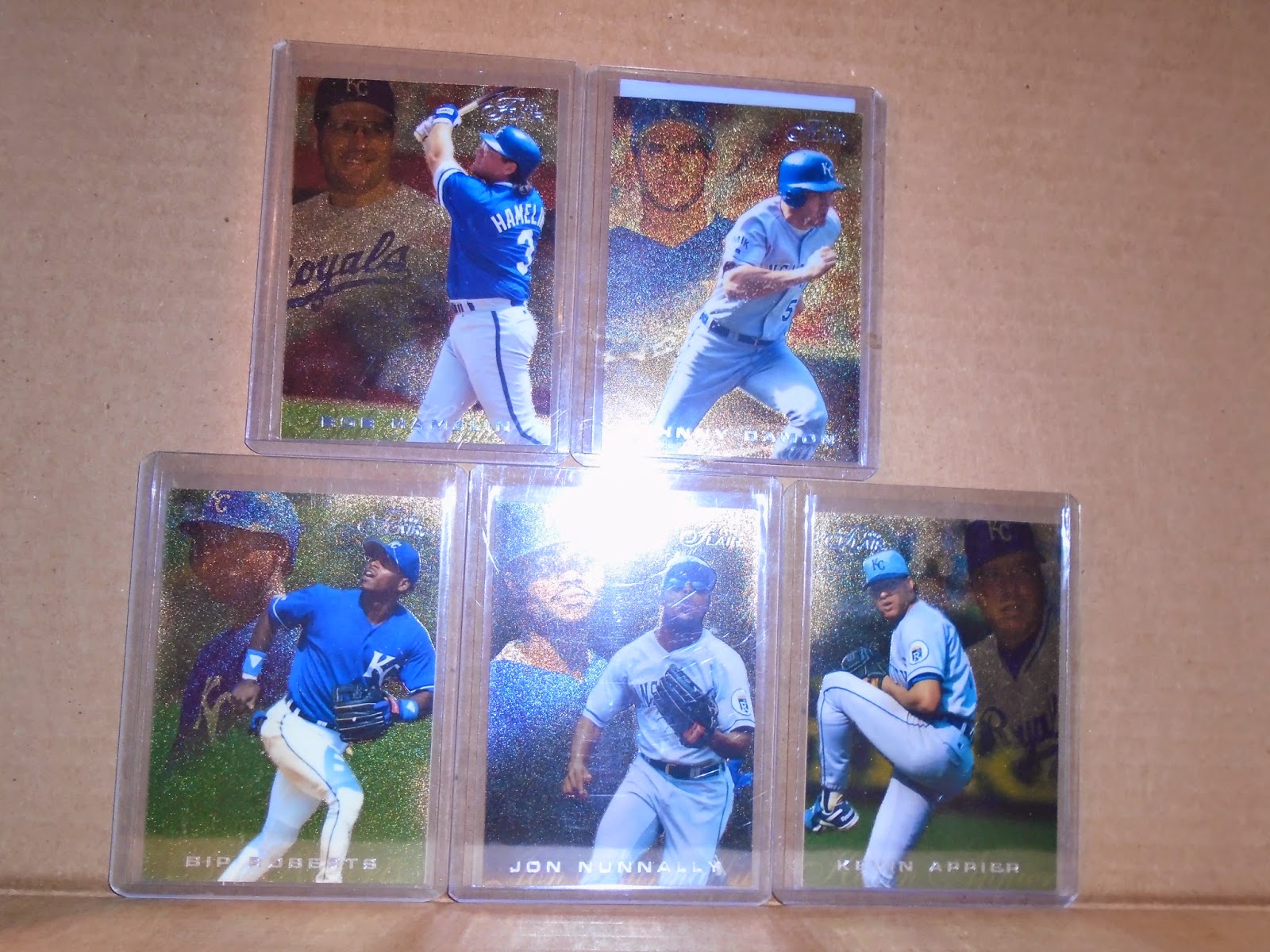 How about that for some Flair?  Each of these were sold in separate auctions all ending within 20 minutes of each other.  I told myself I wouldn't spend over 100 credits per card, but after winning the first two for about 70 credits each, I made exceptions.  The highest I think I paid for any one card was about 120 credits.  In the end I think it was 453 credits for all of them.  I didn't have any of these cards, so they all go well into my collection. 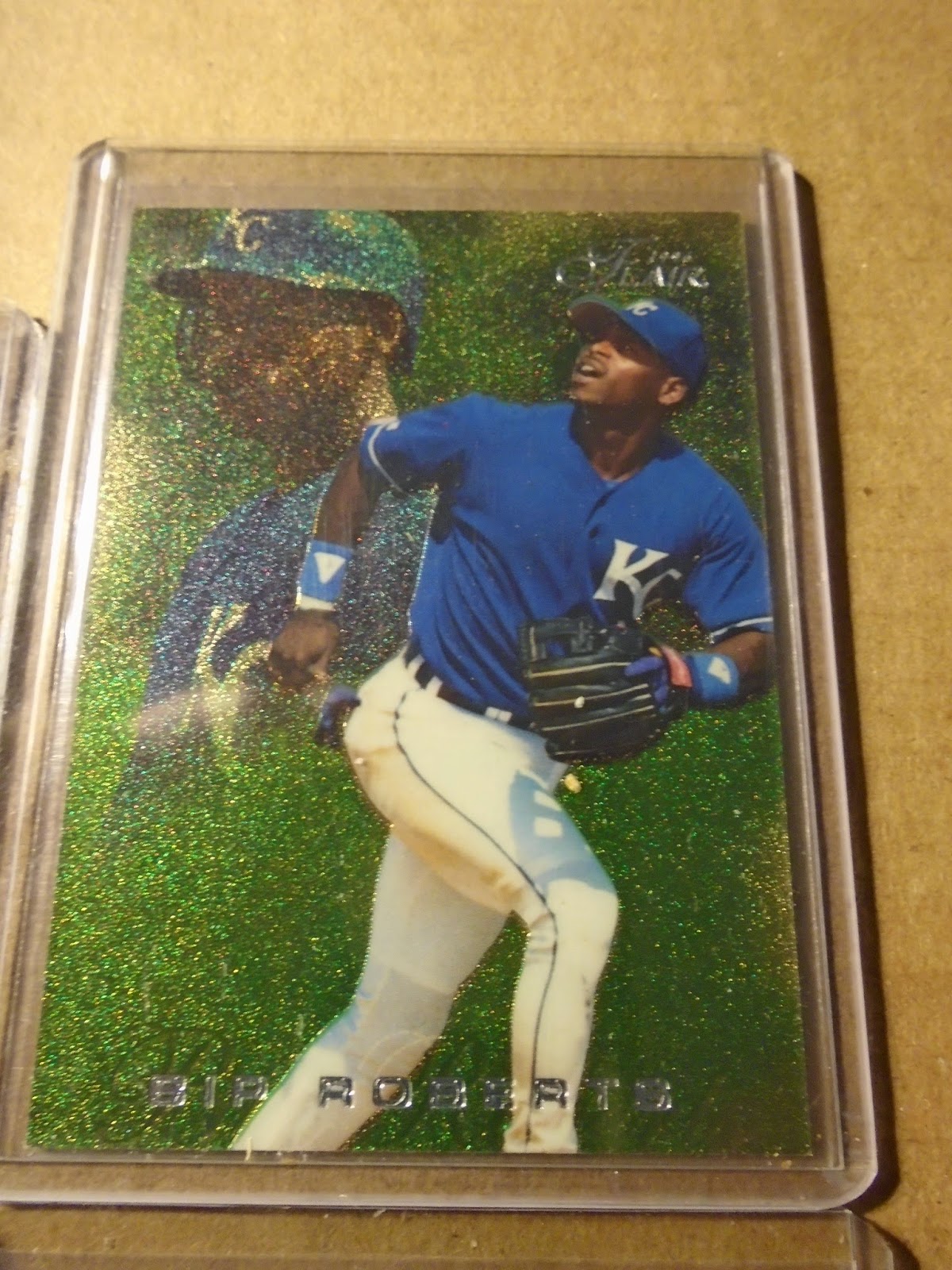 Here's a Bip Roberts that until a couple months ago I forgot was in Royal Blue. 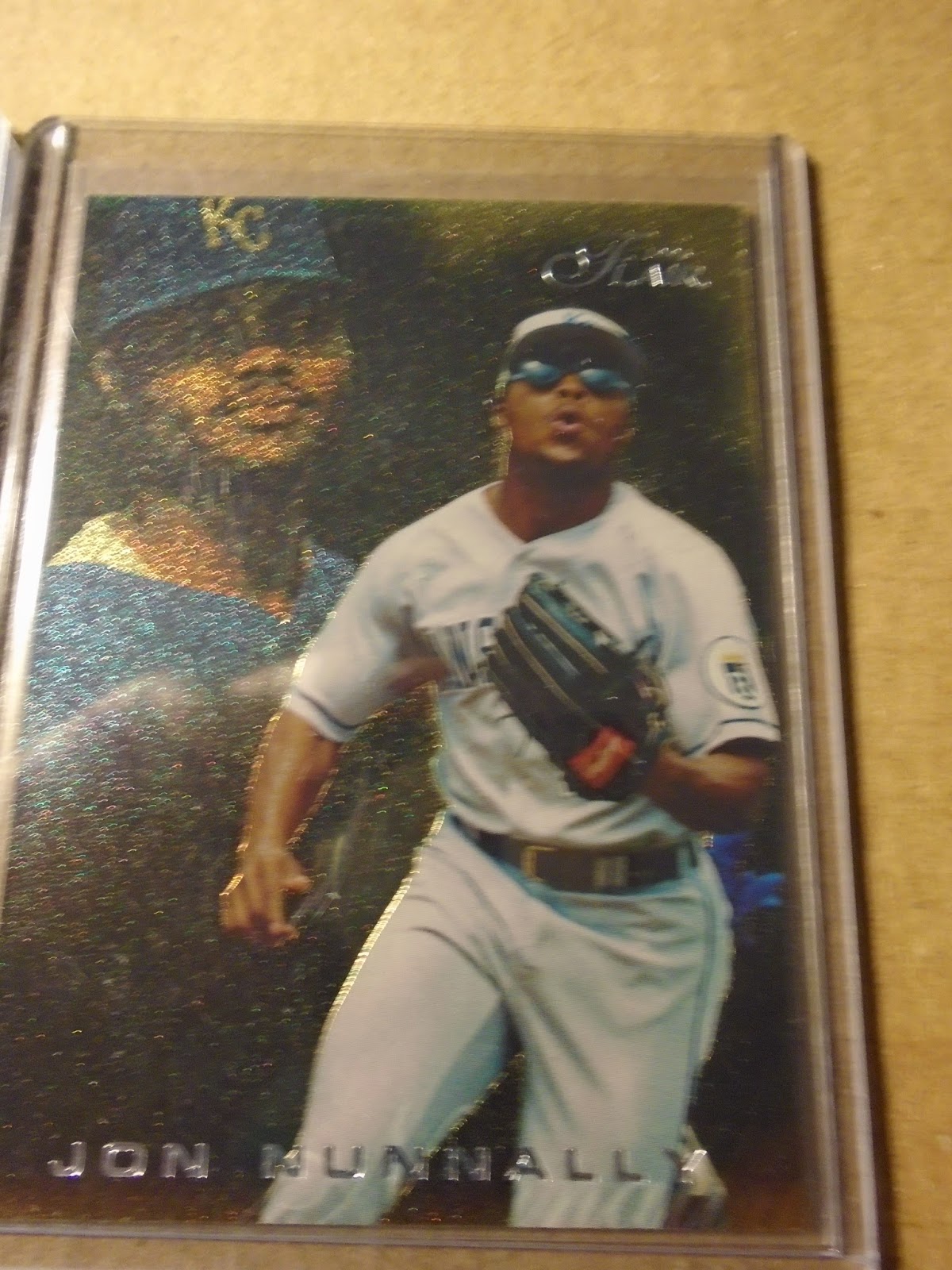 Jon Nunnally who I do remember him playing in Kansas City.  I also think of Joe Dirt when I hear his name.  I know Joe's last name was Nunnamaker (or something like that), but I always want to say, "That's why they call you Joe Dirt and not Jon Nunnally".  Which now that I think about it is really mean to say to Jon.  I guess I won't say that to him if I ever meet him. 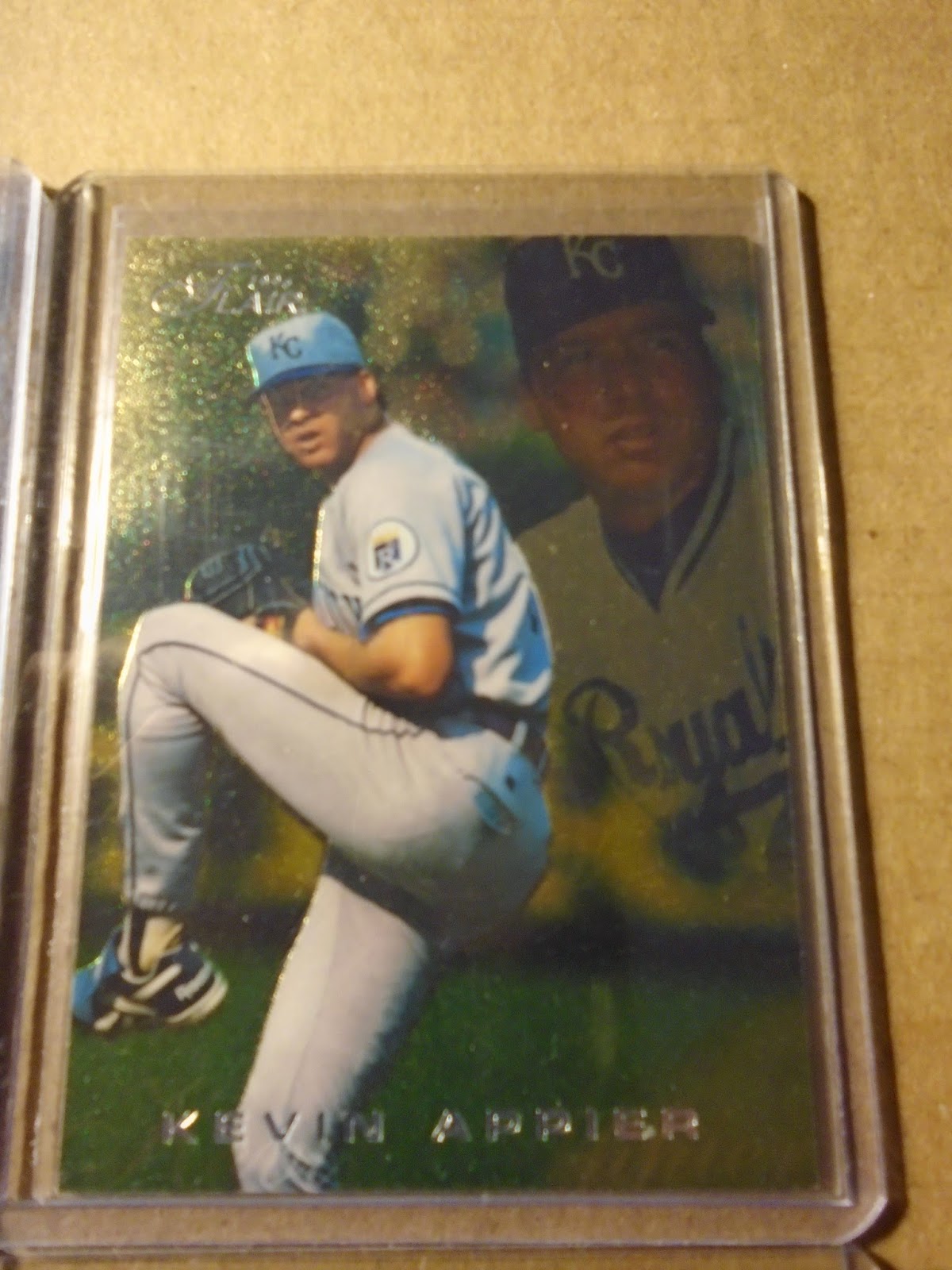 APE!  Shortly before I started my blog I was starting to collect specific players instead of team sets.  I got a lot of Kevin Appier cards as a result.  Once I have a solid grip on the team sets, I may venture out and try to get some other Appier cards from his time in Anaheim. 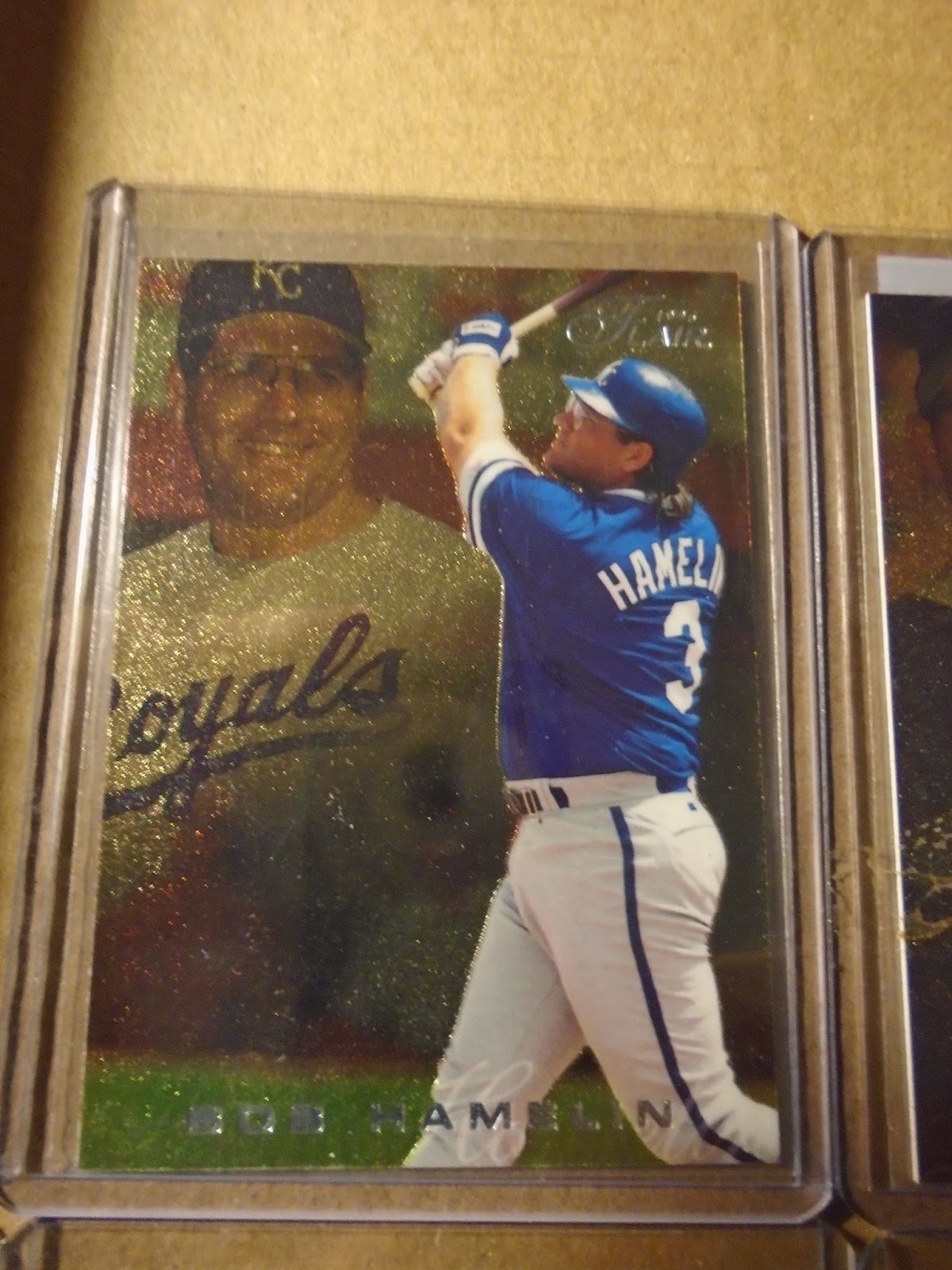 Another player I was starting to collect was Bob Hamelin.  In a way I am glad I am collecting team sets that way it doesn't seem like too much of an obsession that I have so many Hamelin cards. 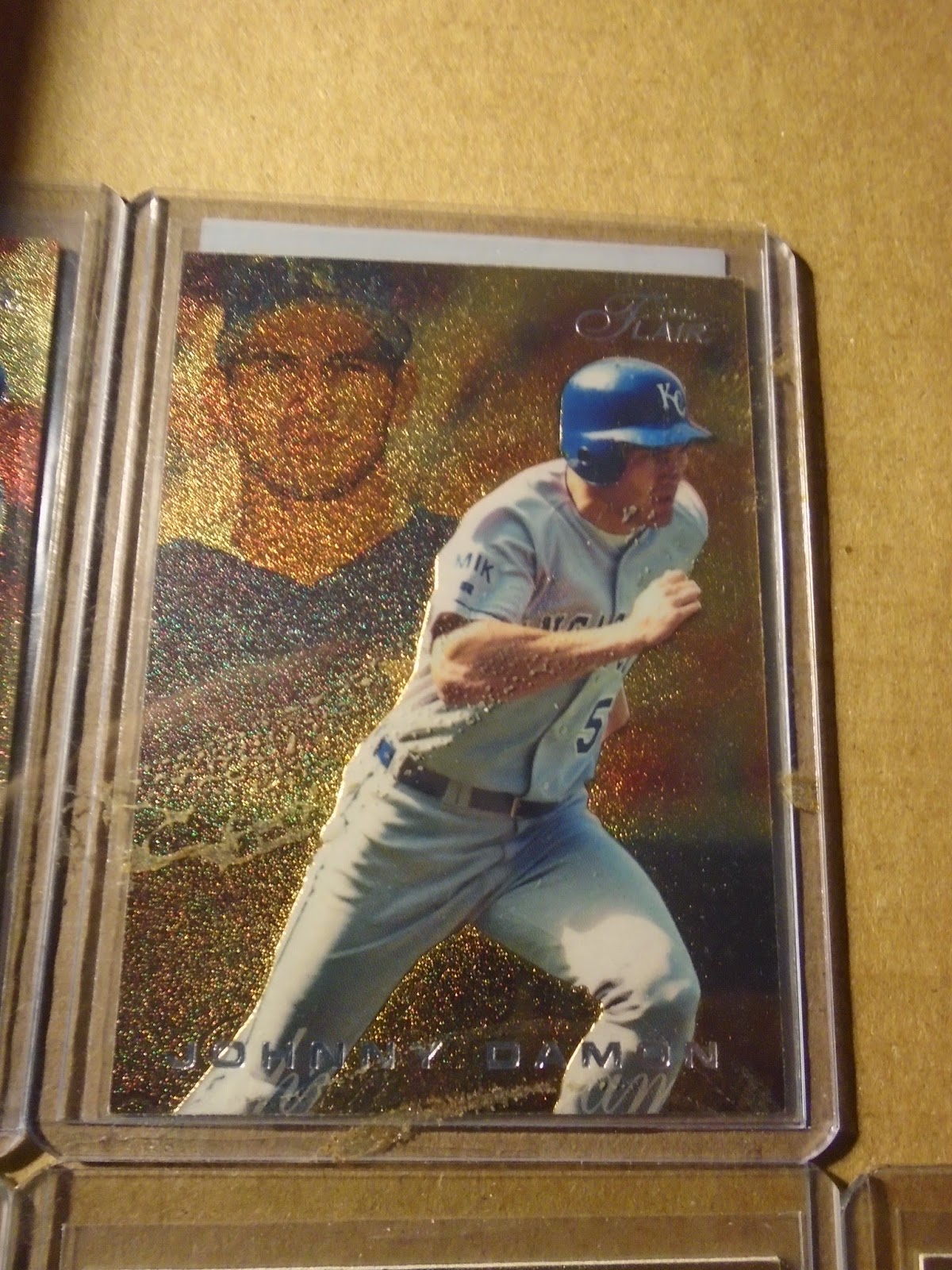 Lastly, we have really the main reason I even spotted these cards in the first place.  Had I not seen this card, I likely wouldn't have gone after any of them.  I prefer to collect lots or sets of Royals cards instead of just one at a time.  However, all that goes out the window when Johnny Damon is involved.  I am a little excited to see he is on the upcoming season of The Celebrity Apprentice.  It's a show I watch anyways, but I have more interest in it this year because of him.  He doesn't seem like the type that will make it too far, but we'll have to see how it plays out.

Overall, I got all the cards listed today for under 1,000 credits (the Brett card was the priciest at between 5-600 credits).  I can't complain too much when I got a total of 26 cards, 20 of which I didn't even win.  These were my first Listia wins in almost two months, so it looks like I'm getting back in the swing of things.

Thank you for reading, and have a great day.  My next post will be post 100, which if not for the miscues in November I would have finished then.  I have a couple ideas for the monumental post, but I don't have anything definite yet.  I'm just glad I managed to make it to 100, as back in August I wasn't sure if I would stick to it.  Anyways, I'll talk about that later.  I hope everyone has a great New Years Eve and Day.