So close yet so far away

After the incredible year the Kansas City Royals had, I couldn't ask for more.  However the past couple weeks I have been frustrated whenever I watch the Chiefs play.  Not because of them exactly, but it seems a lot of calls have gone against them.  Even what seemed to be videographic evidence has somehow gone against them.  Now normally I'm not super hard on the refs, I understand teams get calls for and against them fairly equally.  However as a result, the Chiefs backs were against the wall today.  In the end, the Chiefs did their part and won to keep their sliver of a playoff chance alive.  However the Ravens won, therefore Baltimore made it in and the Chiefs can heal up for next year.

It wasn't all bad for me though.  Due to a lacerated spleen (OUCH!) Alex Smith was out of the game, and Chase Daniel started the final game of the year for the Chiefs against the San Diego Chargers for the second straight year.  I have always been a fan of his ever since I saw him play at Mizzou.  I followed him in his brief stint in Washington, then again as a backup to Drew Brees in New Orleans.  This was his chance to shine. 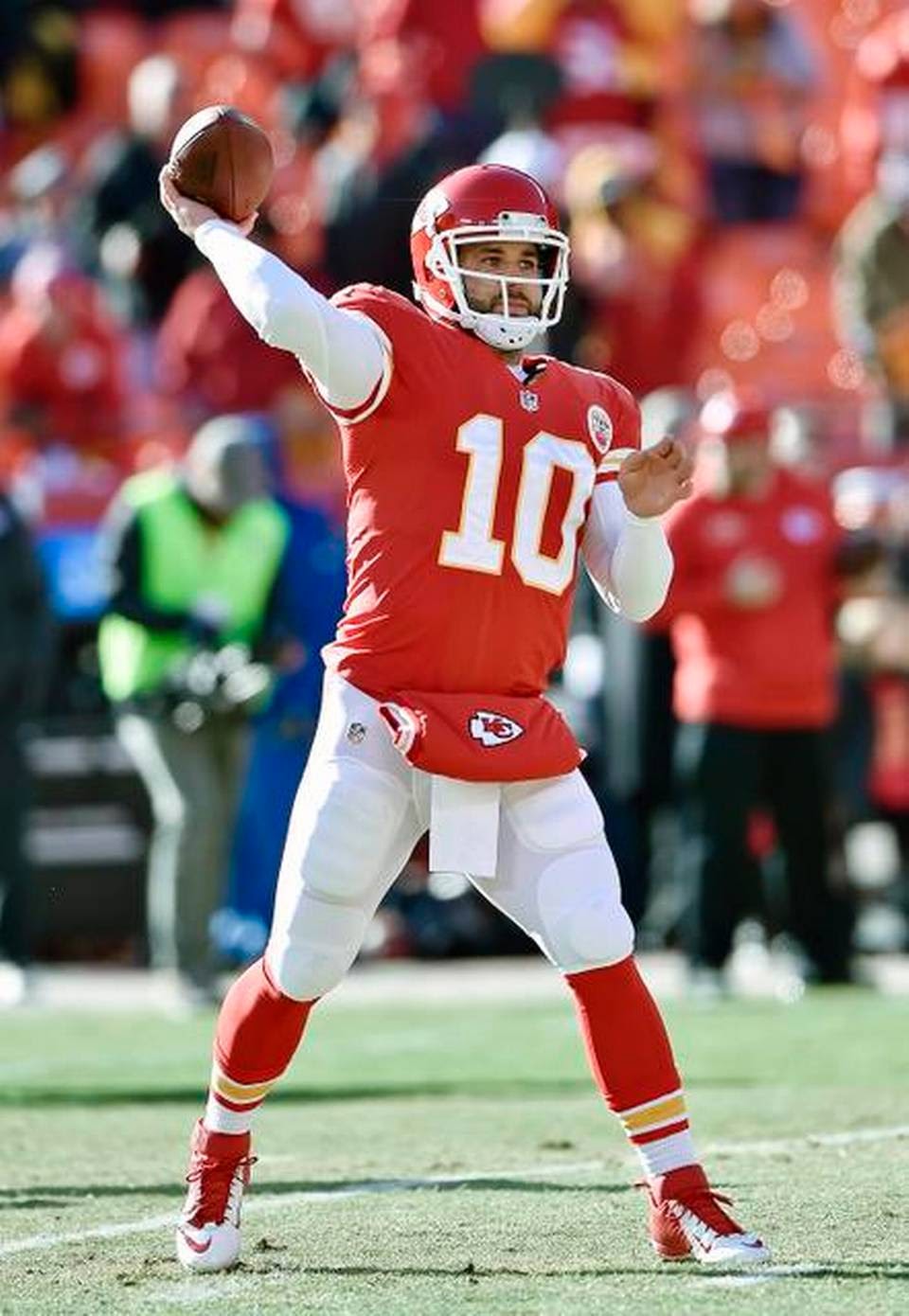 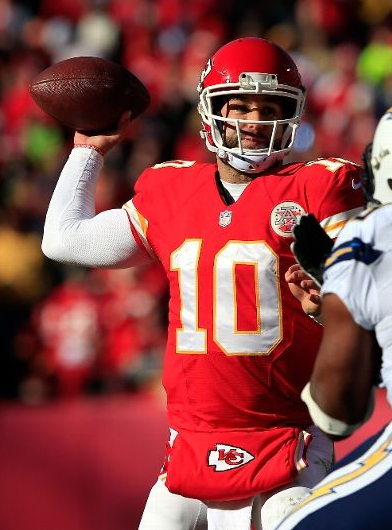 Those are ball card worthy shots.  I might make some if I know I'll see him.  I have met him a couple times, and have a few autographs of him, but nothing in a Chiefs jersey.  So the question is DID HE SHINE?  See for yourself. 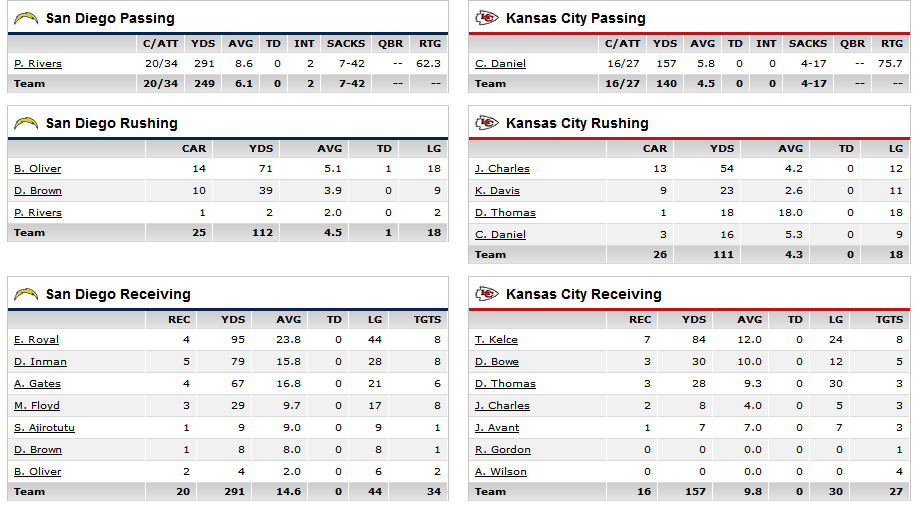 I say he held his own against Philip Rivers.  To me that's not saying a lot since I have never been high on Rivers (I think I've gone as far as calling him overrated).  Chase did have a higher QB rating, and should have had a TD pass had Dwayne Bowe not fumbled at the 1 yard line.  Luckily Travis Kelce picked it up in the endzone for a TD, but still.  Chase also showed he could scramble when the O-Line protected him.

Chase even got some screen time after the game on CBS with a post-game interview. 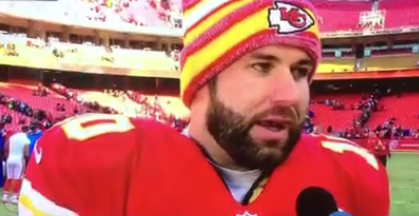 As one person on twitter noted, The Chiefs should make the playoffs just because of Chase Daniel's beard.  The interview itself will be talked about for some time because of  a moment where Chase made one of his only mistakes of the day.  When asked about the performance of Justin Houston (I'll get to that), Chase told the reporter "He's a better player than he is a person."  Well, in Chase's defense, when you only get interviewed by the media once every few years, you aren't the best at interviews.  I mean the last time he likely had national coverage was when he was a Heisman finalist in college.

Speaking of Justin Houston, he had a monster game.  In the end he set the Chiefs' single season sack record and fell 1/2 sack shy of tying Michael Strahan's NFL record.  The gap was a lot closer than...nevermind. 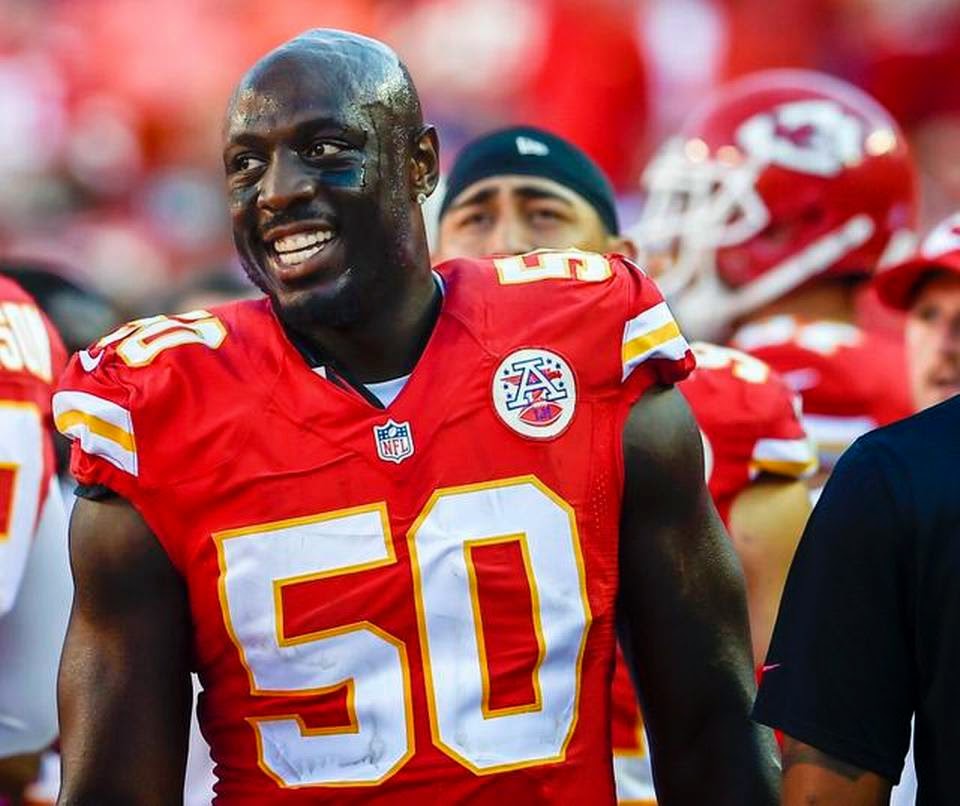 Justin Houston has also kinda solved a hunger issue in Kansas City as well.  During each game, if the Chiefs score a sack, Big Mac's in the Kansas City area McDonalds are buy one get one free the next day.  They had a sack in almost (if not every) game this year. 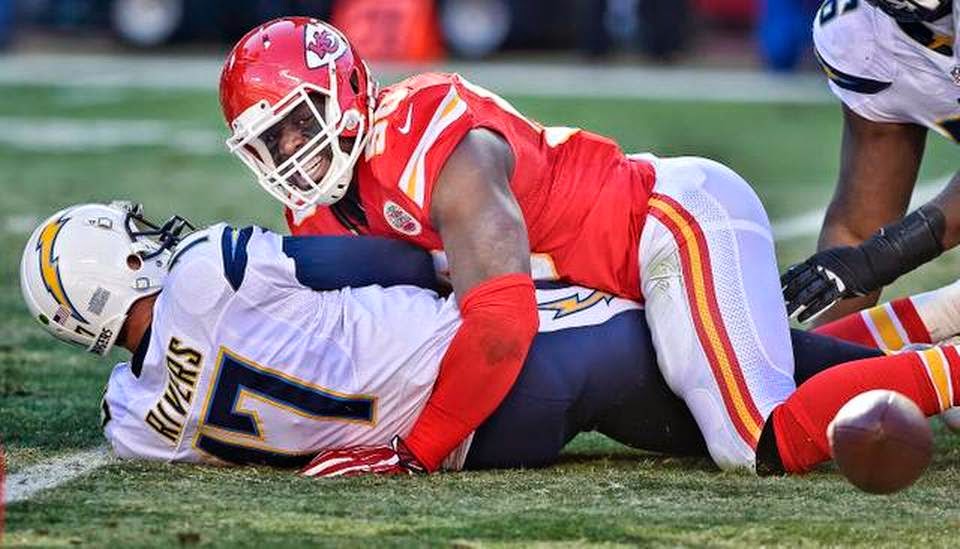 Big Mac's for sacks was a huge success this year, needless to say.  Another promotion saw the Blitz Box.  It was 2 Quarter Pounders, 2 Cheeseburgers, 2 Medium Fries, and 20 Chicken Nuggets for $14.99.  At one point they also included a Chiefs flag in the box too. 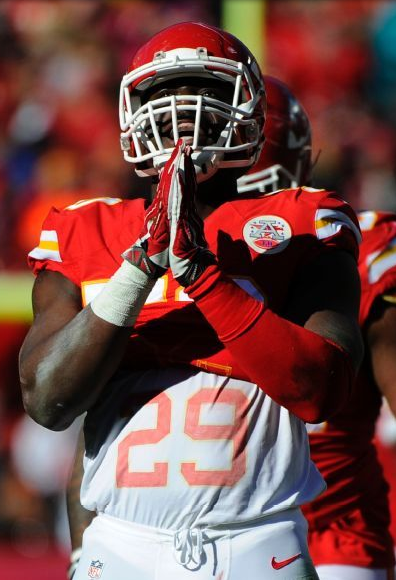 All in all, the Chiefs Kingdom has become huge fans of Justin Houston.  With gestures like the one above (honoring Chiefs player Eric Berry), Houston is at the top of many Chiefs fans wish lists for next year.  At best, they resign him long term.  At worst, they franchise tag him.

So with all this talk on Houston, some may wonder whose record did he break?  If you are a Chiefs fan or even a defensive minded fan, you already know that answer. 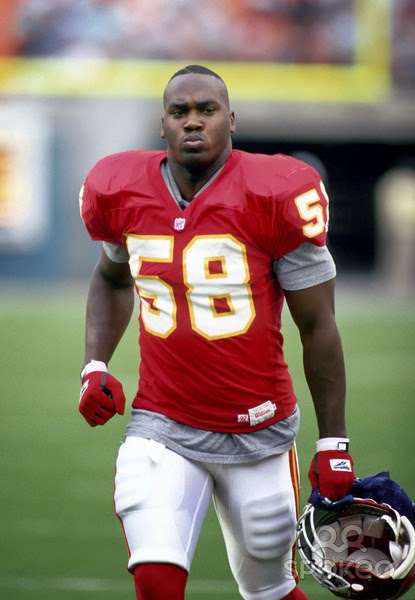 The late, great Hall of Famer, Derrick Thomas.  DT was one of my favorite things I loved about watching the Chiefs play on Sundays as a kid with my dad and uncles.  I liked all the players, but he was the one that excited me the most.  I remember the SEVEN SACK game quite well, and thanks to the NFL Networks special on him earlier this year or last, I got to relive it. 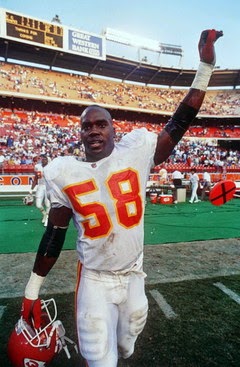 As with most players who spent a good deal of time as the face of a franchise, you could still go to Arrowhead Stadium today and still see fans wearing #58 and they still sell them in the team store.  He was there before the Montana/Marcus era, and was there afterwards too.  Sadly he died in a weather related accident on I-70 heading to a Rams playoff game, but he still had some good years left.  If he was still alive today, I have no doubt he would be working somewhere in the Chiefs organization and working with many local charities.

A few years ago, I went to a Mizzou game and afterwards my friend and I waited for the players to come out after the game, and I got to see someone that too this day may be one of my most memorable. 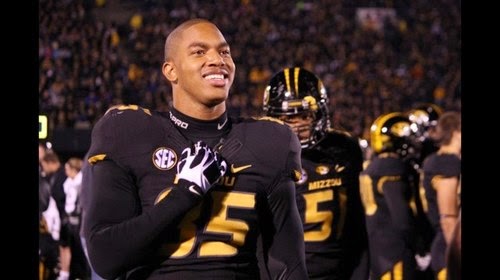 For a brief stint, one of Derrick Thomas' sons, Derrion Thomas, played for Mizzou.  He was a walk on, but I was really excited to meet him.  I got his autograph and told him how I was a big fan of his dads.  I'm sure he had heard that a lot, but while I never got to meet his dad, I was just as excited to meet Derrion.  In 2013, Derrion graduated from Mizzou, something Derrick was in the process of doing when he died (though Derrick was finishing courses at Alabama, where he played).

The day I met Derrion was one of those days where I handed out some advice I will pass on to anyone who likes to get autographs after games or in person.  When asking for an autograph in person, obviously be nice about it, but give details.  Not about you, but the person you are seeking an autograph from.  Not an obvious one though.  A few years earlier when I was working an overnight shift at Wendy's, one of the members of the band Bowling For Soup came in.  While he was waiting for his food we was talking, and he mentioned he was in band.  I asked him which one, and when I did, I could tell he wasn't expecting me to know of them.  He said "Bowling For Soup".  I said "Oh, cool".  I played it off well.  However, I was a big fan of them, and likely would have tried to go to the show if I knew about it.  Here's where the details come in.  This was around the time they had the hit "1985".  Now anyone could say they love that song, but by being a fan I then said "you guys sing Girl All The Bad Guys Want" and you should have seen his face light up.  "Yeah, thats us".  The idea is to let them know you are a fan of theirs without actually going through all their history.  It reminds me I should do a post on stories from Wendy's one day.

If you don't have any info on the person, just create small talk and find out stuff or let them dictate the conversation.  When I met Matt Hoch during Mizzou fan day when he was a Freshmen, I didn't know anything about him.  All I had was the spring program with his name and hometown in it.  As he was signing I said "you're from Iowa?  You ever go to the Iowa State Fair?"  So we chatted about that.  Be genuine I guess is what I'm getting at.  I never seek autographs for resale.

Anyways, I kind of went off topic, so I will wrap it up by saying, there's always next year Chiefs.  To close it out, I have one more picture. 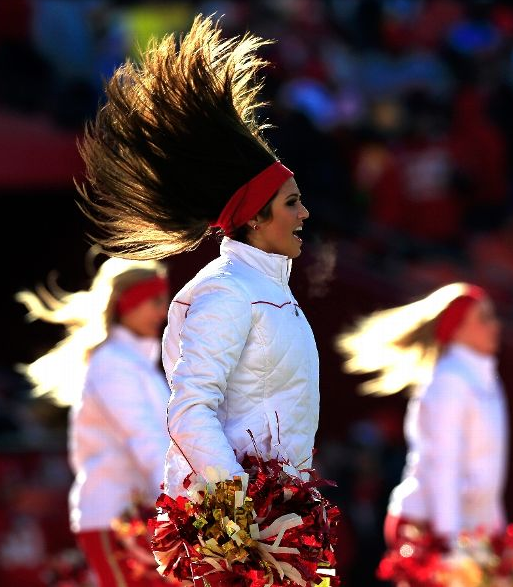 Who can hate on that picture?