Recently I made it to the local second hand store, Savvy Seconds.  The are a non profit organization run by Unlimited Opportunities or UOI.  If you have a few minutes check out their sites and read about them.  A couple years ago they had a massive fire destroying their entire building, and just recently they reopened at their original location in a massive storefront.  Anyways, I haven't been there since just before Halloween, so I was a bit excited to see what they had.

I went with my mom, and I the selection seemed a little light, but at the same time, very diverse.  If that made sense, then you might have had too much eggnog.

We walked in and I noticed a sign on the door stating 20 books for $1.  I was curious if they planned to do away with books because while they had a couple bookshelves full usually, they are normally 5 for $1 or so.  Mom and I made our way over there first because we figured it would take a while.  We wasn't in the market for books, but if we found a couple we liked surely we could find enough to make 20.

We spent a good amount of time at the store and in the end did find 20 books.  They have no plans of doing away with books though.  They were strewn throughout the store.  I MEAN EVERYWHERE!  Hidden inside cabinets, stuffed behind shoes, if they had free space, it was filled with books.  My guess is a huge donation from someone, or a bookstore closed, or possibly the library donated a bunch of books.  I even heard an employee say there were a ton in the back.  We might have to go back sometime again soon to see what else they got.

In the end mom got most of the books, as to be honest, I'm not a big book reader, but did find a few I was interest in.  I will show most of them today, and one special one later today or tomorrow. 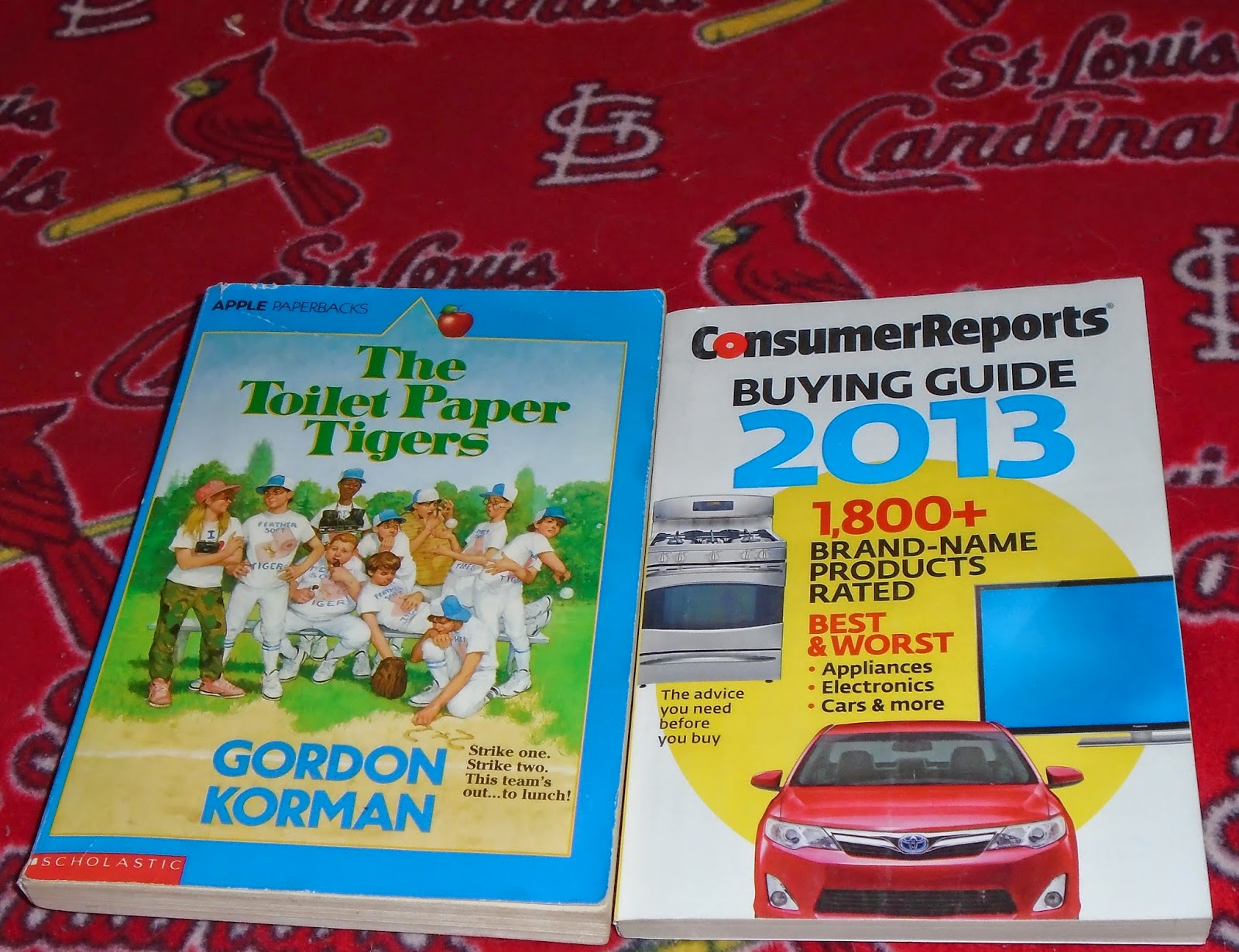 Most books about sports, mainly baseball catches my eye.  I passed on several blooper books (not sure how blooper books work, I'd rather see a clip then reading about it), but I couldn't pass up one called The Toilet Paper Tigers.  Earlier this year I picked up several Matt Christopher books, so I have no problem buying kids books.  I'll let you know how the book is at some point.

The other book was one that kinda was just to get to twenty.  I like reading Consumer Reports when I can find them, so the buying guide while not real new, is still fun to look at.

Next are a few I found early on.  I like Lewis Grizzard books, and while mom swore we had this one, I decided to get it anyways.  I prefer short story style books, so this one fits right up my alley.  The Bad President book was one I thought about for a bit.  I got it because while I kinda liked Bush (not getting into politics here folks), I realized this was a book built on humor so I got it.

The other book is a Paul Harvey book.  I loved hearing The Rest Of The Story on the radio when I was younger, so I figured I'd like this book. 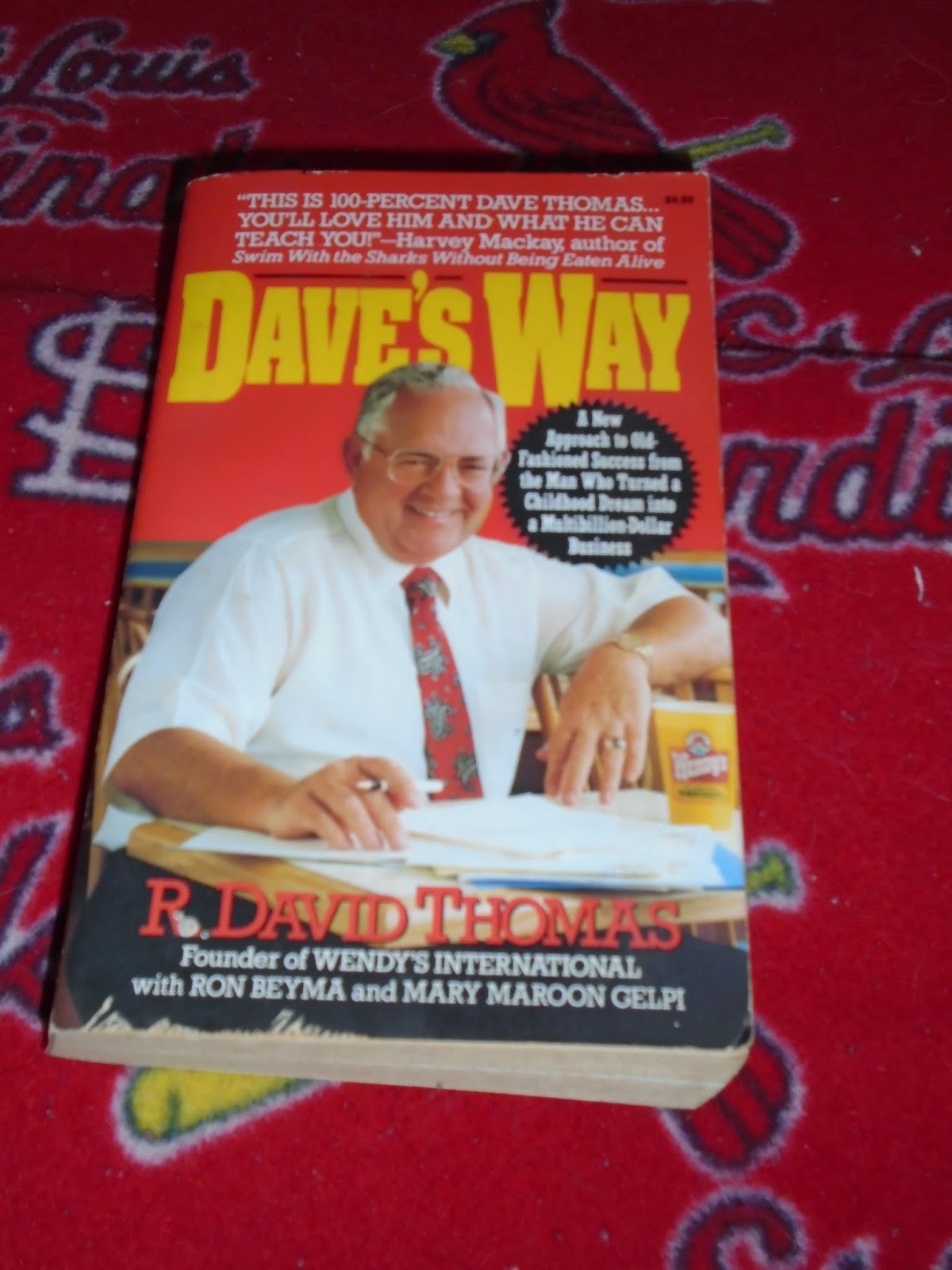 The final book I'll show today is one of the main reasons we decided to get 20.  Mom already had a couple picked out, so being a quarter a piece, it made sense just to get 20.  If nothing else, find some books for my nieces and nephews to read.

I have actually wanted this book for quite a while.  I worked at Wendy's for 9 years, and if Dave would have lived a few months longer I would have probably met him.  The store I worked at opened almost 5 months after he passed.  At the time when I left Wendy's (a long story not worth telling), I was one of only 2 original workers still there.  Since then they had a massive turnaround and within 7 months I only knew 2 people still working there.  They store saw a few changes among the menu and design so while I was offered to come back, it would seem I'd have to start from scratch and there was no way I was going to do that.

Anyways, I wanted to read the book because I admired Dave as a businessman, so I was happy to find this book.

You may have noticed in the pictures I have a Cardinals background.  Before you ask, no I didn't switch teams, matter of fact I cleaned up my Cardinals collection last night and about to trade some of them away.  It is actually a heavy duty blanket that someone made.  I love the design even though its the Cardinals.  I bought it about 4-5 years ago.... at Savvy Seconds!  I think it was a steal at $3, and probably the best buy I ever made there.  I think back at their old store, and I miss it a little.  However, their new store is a much better design, and am happy things turned out so well for them.

I mentioned in the title a Monster Update.  The Monster I am referring to actually again goes back to Savvy Seconds.  A few months ago I mentioned on this blog I bought some cards from the store and found out some were from a 1994 set called Monsters of the Gridiron.  Since then I have been buying a few here and there on Listia and thought I'd show a couple more off I got a couple months ago. 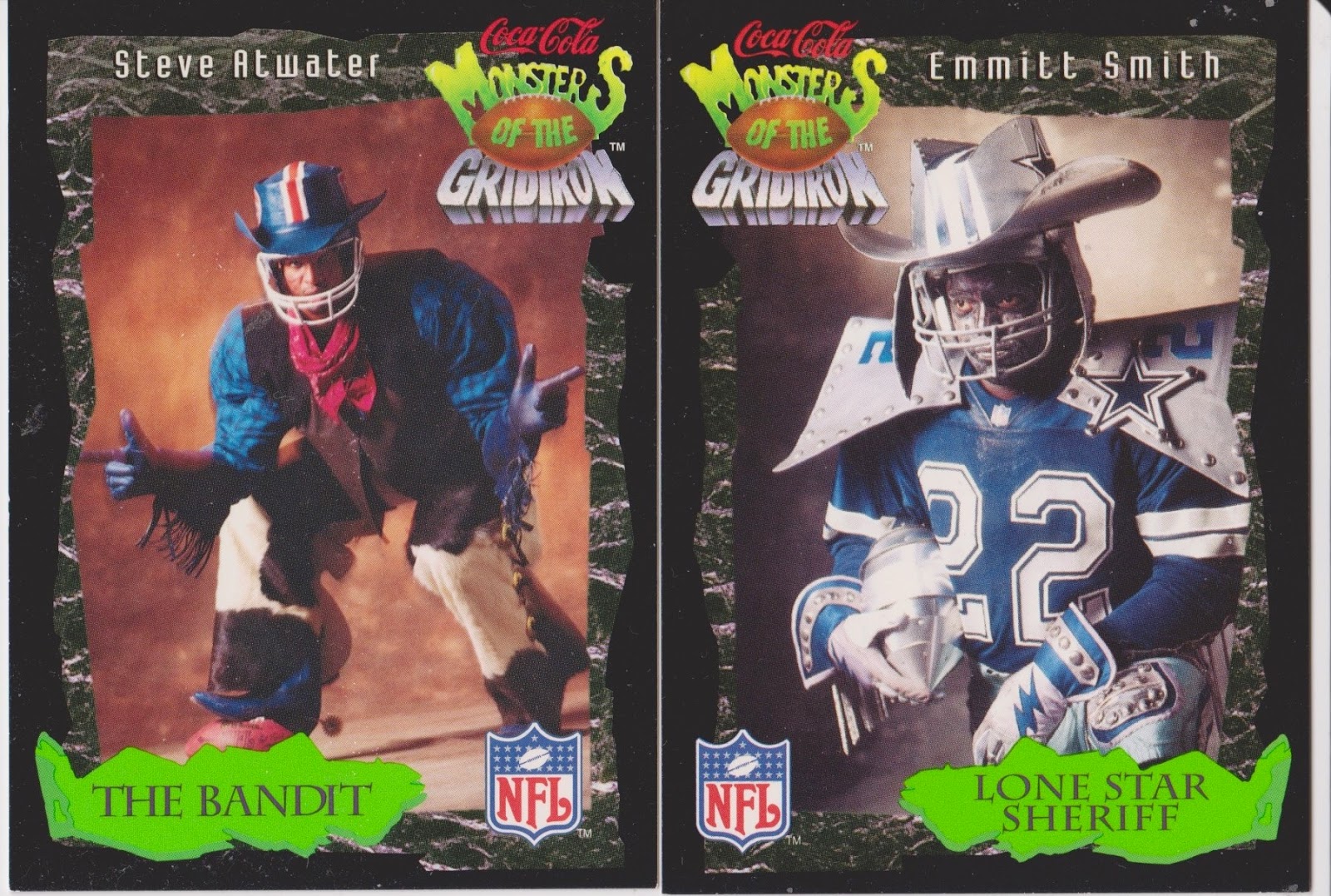 I got these pretty cheap, I forgot the actual total, but I've tried to limit the total to under 500 points each for these cards (I was outbid for one yesterday where my high bid was 650 or so).  The Emmit Smith card is one of the biggest names in the set so I was happy to get it.  After these two, I think I have 13 or so of the 30 for the set (plus I need the checklist).  While I appreciate cards from folks, this is one set I want to finish by myself.  However if anyone has links to where to get some, let me know.  I plan to use COMC and Listia as I have credit on both those sites and they are cheap.

Well, that wraps it up for now, I still have one more book to show off, I'll save that for next time.  Not dropping hints, but let me say the one book left to show was worth $1 all by itself.  I also passed it by the first time so it always pays to give a second look at thrift stores before you checkout.