I know I'm a few days late posting this but there are a few reasons.  First off, my family hasn't officially celebrated Christmas yet.  We are planning it in early January so everyone can be with their families.  Therefore, will I never ask for anything, and honestly don't expect anything, if I do get something, I will be blessed.

However, that doesn't mean I haven't gotten stuff.  I will show a couple things off today, and the big gift I got in a few days.  I am stalling on that because it involves some work and I want it all worked out or at least most of it before I post.  All I can say is it will be a great blog posting.

Not to take away from today's post however. First I will show you something my nephew bought me. 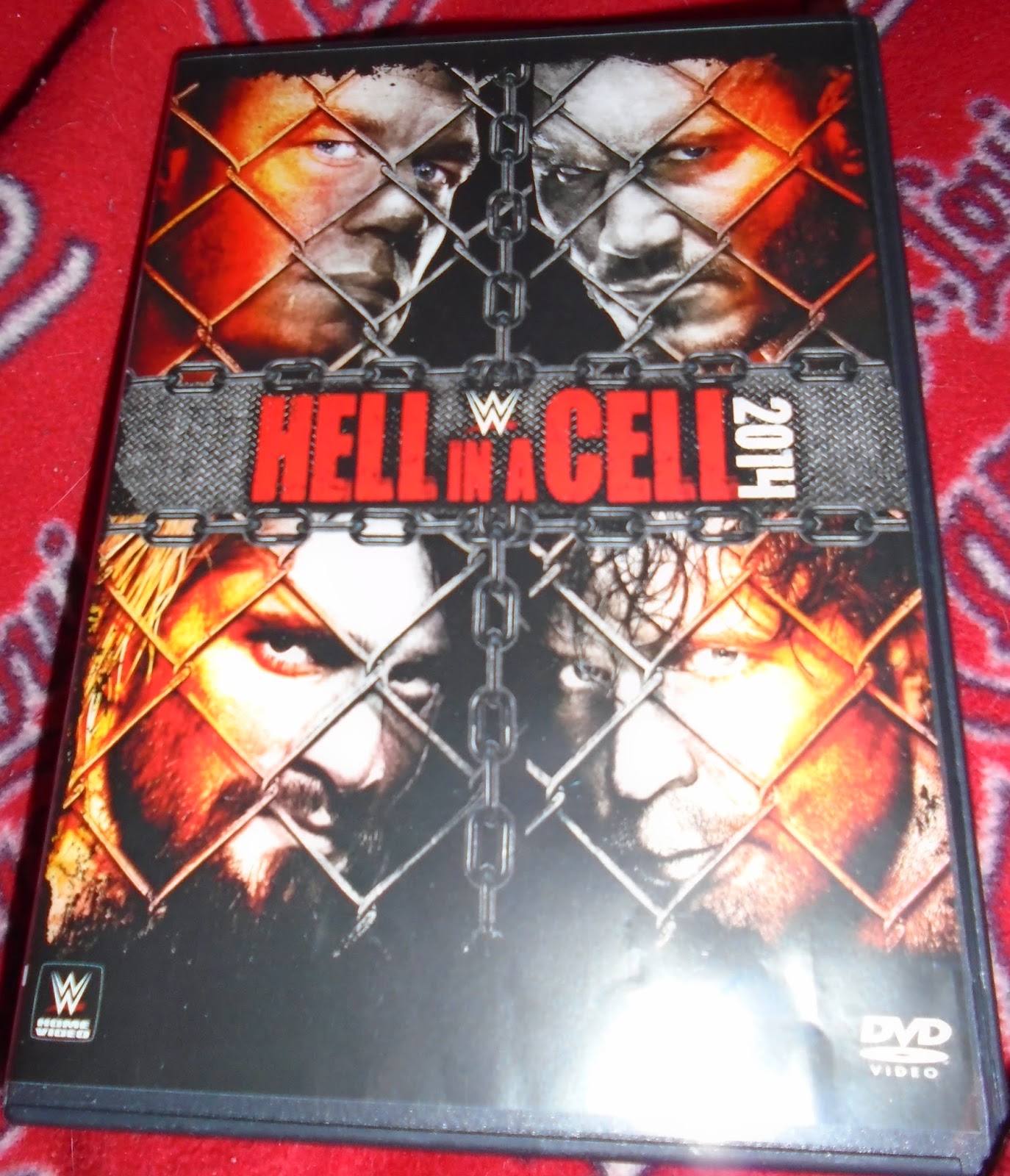 My nephew bought this for me.  Everyone in my family and most of my friends too know I'm a big wrestling fan.  In recent years I have toned it down some, but this year I had the WWE Network for over half the year so I was able to see some classic WCW stuff.  I always chose WCW over WWF despite the poor execution WCW made with the company.

A week before Christmas, my nephew stayed the night, and we spent some time watching some old wrestling.  I showed him a match where they fought on the back of a semi-truck.  Then told him old stories of Kerry Von Erich, Vader, and Cactus Jack.  Now while I am a huge fan of wrestling, I really don't know how they got into it.  They don't watch much these days, but both my nephews like John Cena.  I used to find matches he would win (it wasn't that hard), and root for the other guy.  After my guy would lose they'd rub it in my face.  I wish I could get them into baseball more, but if our bond is wrestling, I'm glad we can bond over something.  I never watched this PPV, and while I am very appreciative of it, I wish he didn't buy it for me.  But I am very thankful for it. I noticed on the package it said a Topps trading card included.  I am not a fan of the Road To Wrestlemania set, but it is nice to get as a bonus.  As a matter of fact, my nephew didn't even know about it when I showed him.  I can't get my nephews into card collecting, and to be honest, I'm okay with that, but for a while they would buy packs of WWE trading cards.  They did well for themselves, and I taught them about keeping them nice and how to store them.  A couple cards I even got jealous of (I think I even traded for a Terry Funk card once).

If they decide to collect cards that would be great, but I won't pressure them.  Back when I started collecting, we didn't have computers and access at our fingertips, so I would study the cards to learn about the players I got.  Today, all one needs to do is do a google search.  It's fine to do that, shoot, I do that sometimes, but it takes away from treasuring the cards you have I think.  While I can't blame the internet for the decline of card collecting, it did hurt it to a point that its something future generations will never experience.  A cousin of mine was born about 12 years after me and to my knowledge, he has zero interest in card collecting.  It was because of his dad and my dad that I got into collecting.  Times just change, and as it does certain things in life become less valued.  It won't take away from my collecting and memories.

Ok, let me move on.  On Christmas Eve, my best friend stopped by.  I was excited because while I talk to him nearly every day, I haven't seen him in person in over a month.  I was most excited because I got to see his son.  It's only the second time I have seen him since he was born a few months ago, and the first time he was awake.  My mom also got to see him for the first time and so was so excited.  I think that made her holiday season more than anything.

My friend had a couple gifts for me.  I will show one of them now. 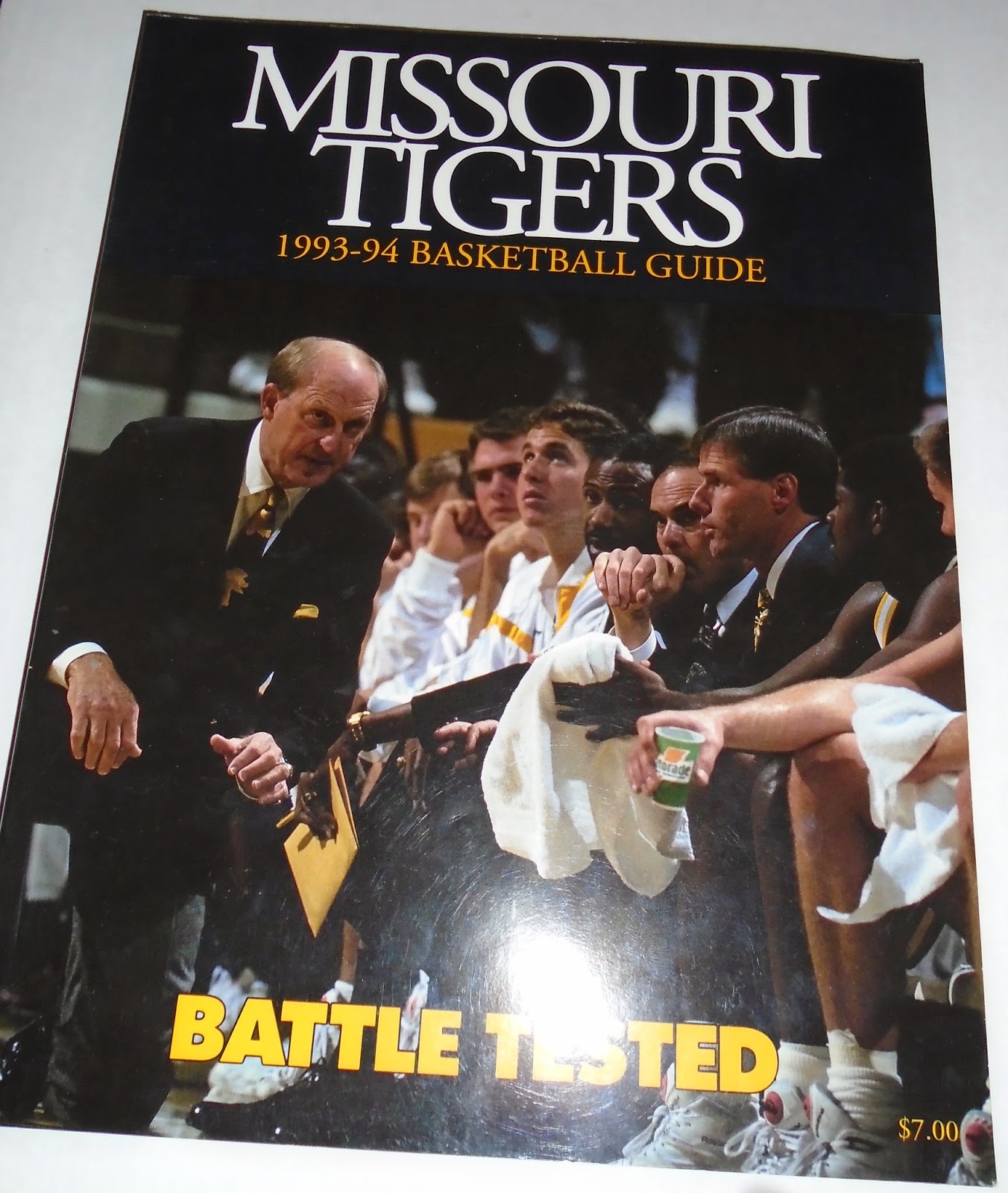 My friend knows I am a huge Mizzou basketball fan.  He doesn't really follow the basketball team much, but he is a huge fan of the football team.  He is thinking about starting a blog himself, and I told him I would help him.  He has a pretty good collection of Mizzou stuff.  To be honest, he is a bigger fan of the football team than I am.  Once he get's started I will give a link for you to follow.

I was very happy to get this guide.  The 1993-94 squad was one of the best ever.  They went undefeated in the Big 8 (man, I miss the Big 8 conference), and had an incredible season.  4.7 seconds is all it took for their season to end.  In the NCAA tournament, Tyus Edney (the nicest I've ever said his name), ran the court and scored the game winning bucket in 4.7 seconds allowing UCLA to beat Missouri and eventually win the National Title that year.  Last year, I had the chance to meet most of the 93-94 team as well as coach Stormin' Norman (Norm Stewart) before an exhibition game at the Hearnes Center.  It was before Homecoming and was nothing short of awesome.  I will discuss it in a later blog, but having this media guide is a great addition to my collection.

Really the 94-95 team was the last great Mizzou basketball team for quite some time.  Norm Stewart was gone a few years later and the Quin Snyder era is best forgotten by many.  While this year is nothing to write home about for the basketball team, at least we have a piece of the puzzle back in place.  Longtime assistant coach for Norm Stewart was Kim Anderson.  He was an assistant in 93-94.  He went on to coach a local University- University of Central Missouri (he lived about 20 minutes from the campus growing up), and he even lead them to a Division II National Championship last year.  Shortly after, he made his return to the University of Missouri, as he became the new Head Coach.

That will wrap it up for today, but the media guide was only one gift my friend gave me.  I will show the other gift in a few days.  Until then, I do have a couple Listia things to show off, and a couple other things to blog about.  Thank you for reading and have a great day.