A whole lotta something

I'm trying to clean up some of these scans I've posted recently because I haven't shown my big gift I got from my best friend yet.  Once I show that, it will take up a few posts, and I'd rather not break them up.  All I can say is that the gift will allow me to post many times about the Royals.

In the meantime, I am going to show off a few more Listia wins today, and a couple more books I got at Savvy Seconds yesterday (they still have 20 books for $1, but the selection is really limited).  Let's get started. 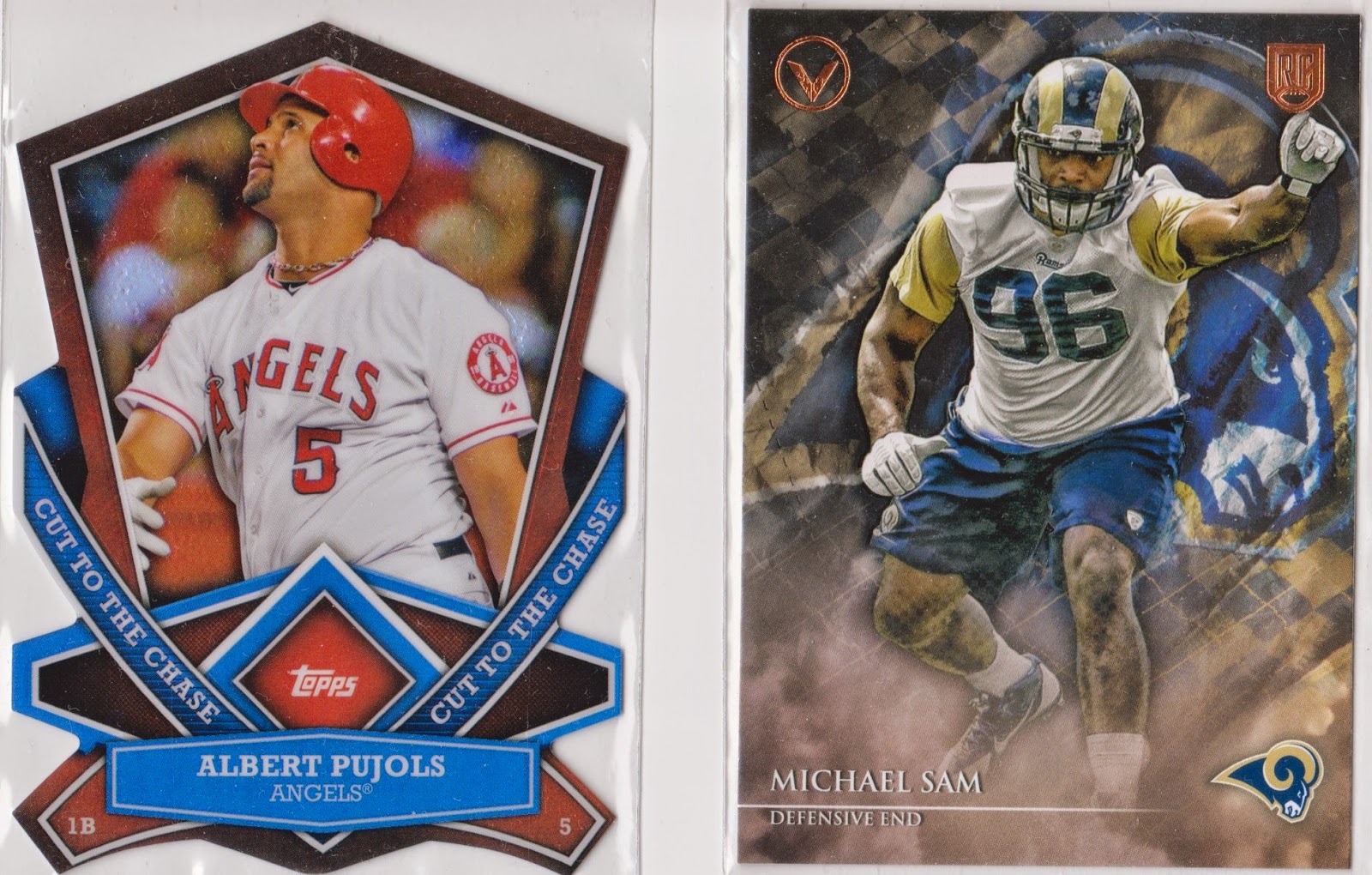 I got both of these in separate Listia auctions.  I'm not a fan of die cut for the most part, but this was cheap enough to add to my Pujols collection.  Honestly, I have a few of these Cut to the Chase die cuts, and I don't mind them as much as other die cuts.  As I thin down other collections, and follow Pujols less, I am a bit curious if I will still continue to collect his cards.  If I do I really want to focus on his earlier stuff, especially prior to 2005.  In the meantime, I have no plans of stopping yet.

The Michael Sam card is a Topps Valor card. I collect Michael Sam because he went to Mizzou.  I was a fan before he came out as gay, and I am still a fan. I believe a lot of people overlook his ability on the field because of all the off the field stuff.  Having said that, I'm glad I have this card, but I don't get why they need to make a card for someone who was an untested late round draft pick.  He wasn't even on the team by the time the card came out.  Actually I know why they made the card- money.  It just makes me a bit mad that the circus surrounding him allows him to get a card while his former teammate EJ Gaines is having a killer season for the Rams doesn't get a fraction of the cards.  Sorry for the rant, but NFL cards have a limited amount slots available since they only have slightly over 400 cards in a set but are over 1500 players on a roster each year, yet Sam somehow made the cut for this set but didn't even make a team (as of now he's not on a practice squad).  I never got why MLB had these huge sets, but the NFL has about half as many.  I'm not saying we need a card for every player, but maybe do like in previous sets and feature 3 or 4 players on a card (especially the O-line who deserve cards just as much as kickers and punters).  Maybe make a 650 or 700 card set.  You could still show off rookies too.

Sorry.  I'll move on.  I'm not mad, but wanted to get that off my chest.  Anyways, yesterday I went back to Savvy Seconds in hopes of scoring some more good books, or perhaps another Mizzou program.  No program this time, and to be honest, the selection was a lot different this time, but it was tough to get to 20 books.  20 books for a $1 is still a good deal, but I got better books last time.  I'll try one more time in a couple weeks, maybe I can get some stuff then.  Here is what I got this time, among other books: 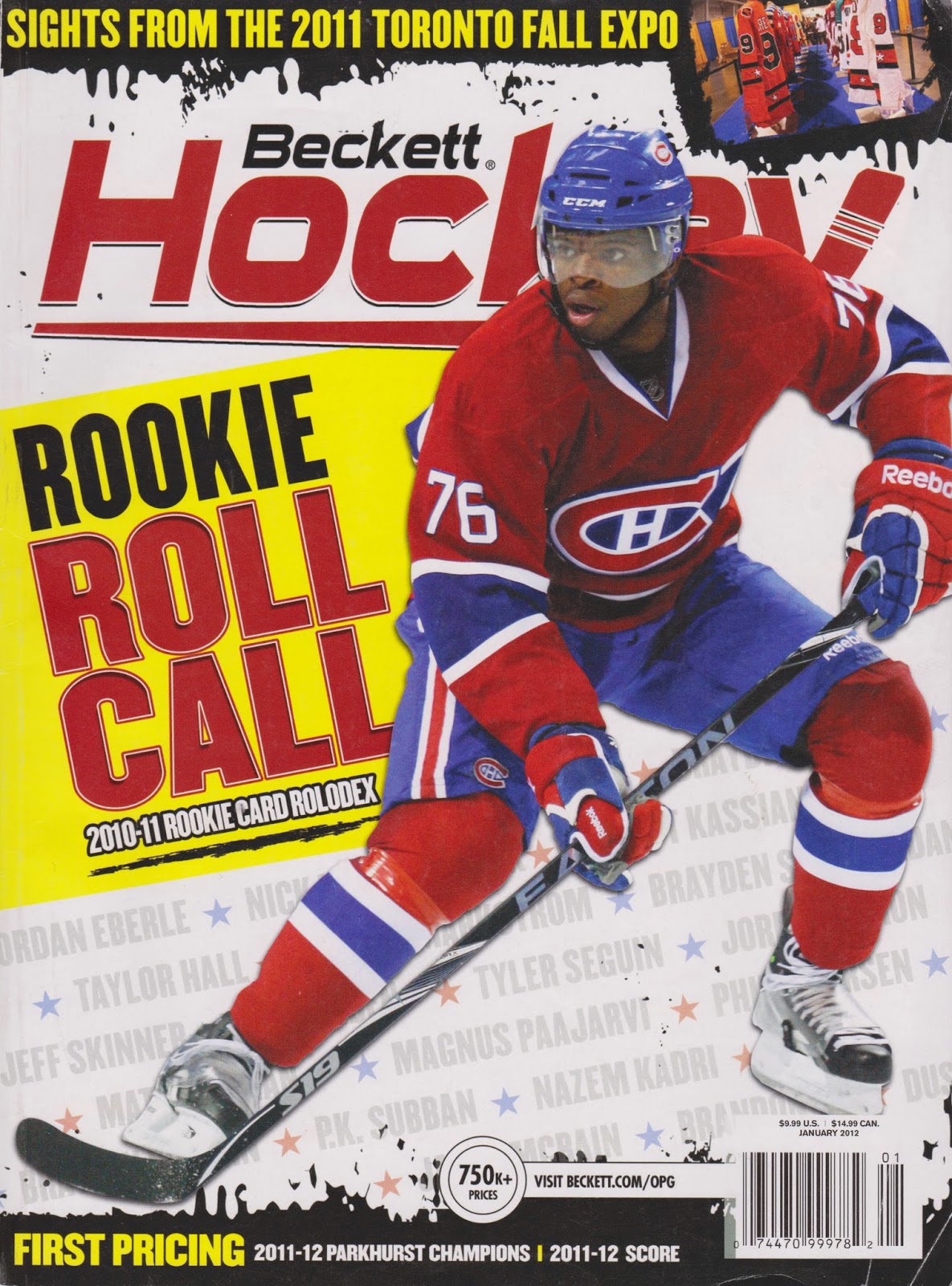 A 3 year old hockey price guide isn't exactly something to crow about, however I got it for a couple reasons.  Besides knowing it would be tough to get to 20 books, I don't remember ever seeing a hockey price guide.  I know its not too different from other sports, but I was still curious.  I have a few hockey cards, so I can see what they were worth a few years ago.  Another reason I got it was just so I could scan it for Trading Card Database.  They added publication scans this year, and figured I could add it.  I also figured when I was done with it I could give it to a friend who is a hockey fan and never sees price guides.  What is odd is the fact that this really doesn't have any articles in it, just mainly prices and ads. 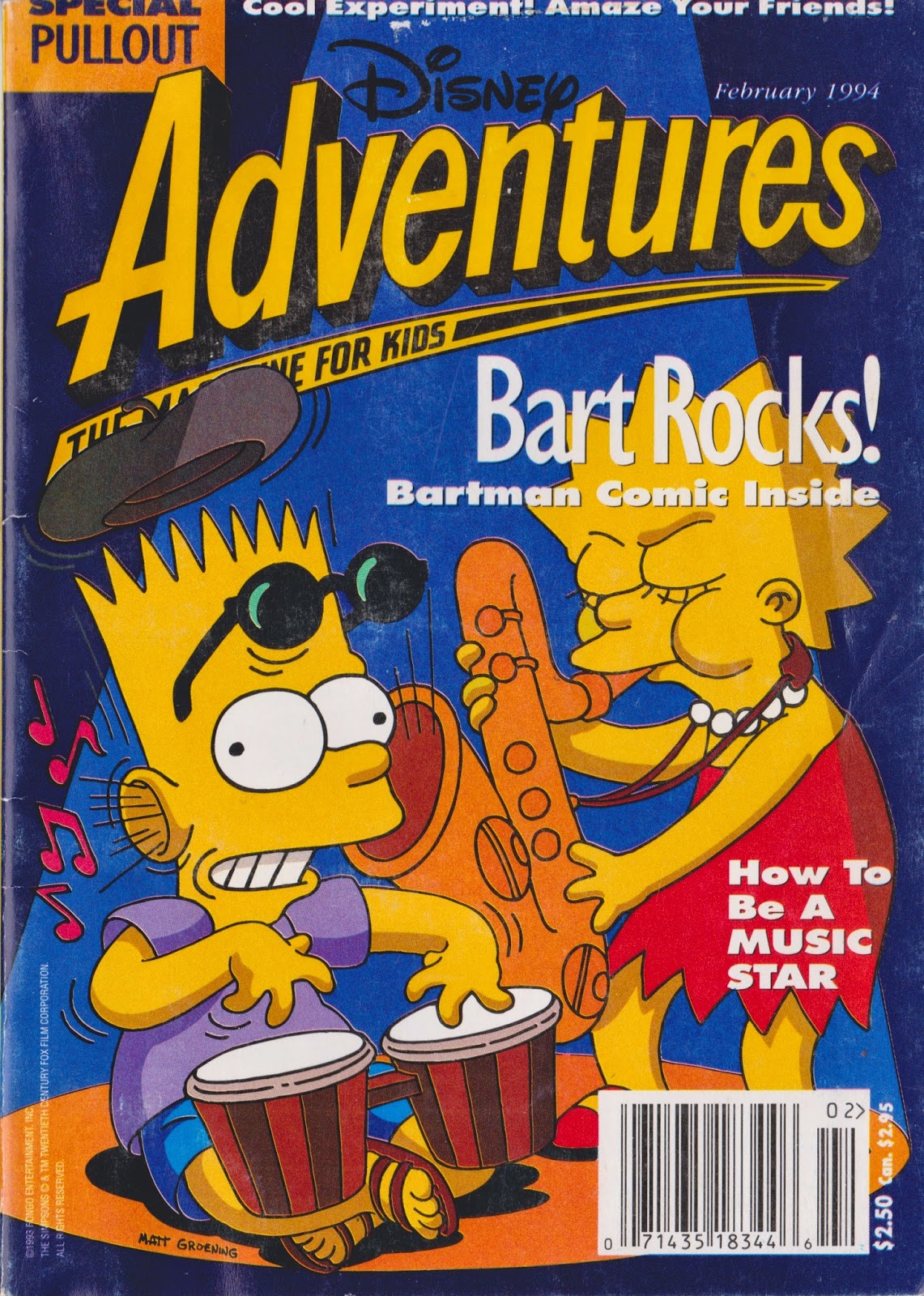 Here is another book that once I finish I will give to my friend.  He is a huge Simpsons fan (I am too, but not to his level), and figured he never saw this.  I showed him the scan last night, and his first reaction was the same as mine.  "Isn't it odd The Simpsons are on the cover of a Disney magazine?"  The moment I saw that I thought the exact same thing.  Inside is also a story on hockey with Wayne Gretzky and Mario Leimuex (I know I messed up the names, it shows how much I follow hockey, at least I can spell Alexander Overchkin, I think).  So this magazine is right up my friends alley.  I admit I like this cover, and will get a lot more use from this than the price guide.

I bought some other books, but nothing worth mentioning.  Before I go I thought I'd show off another scan I took a while back just to clear up my computer some. 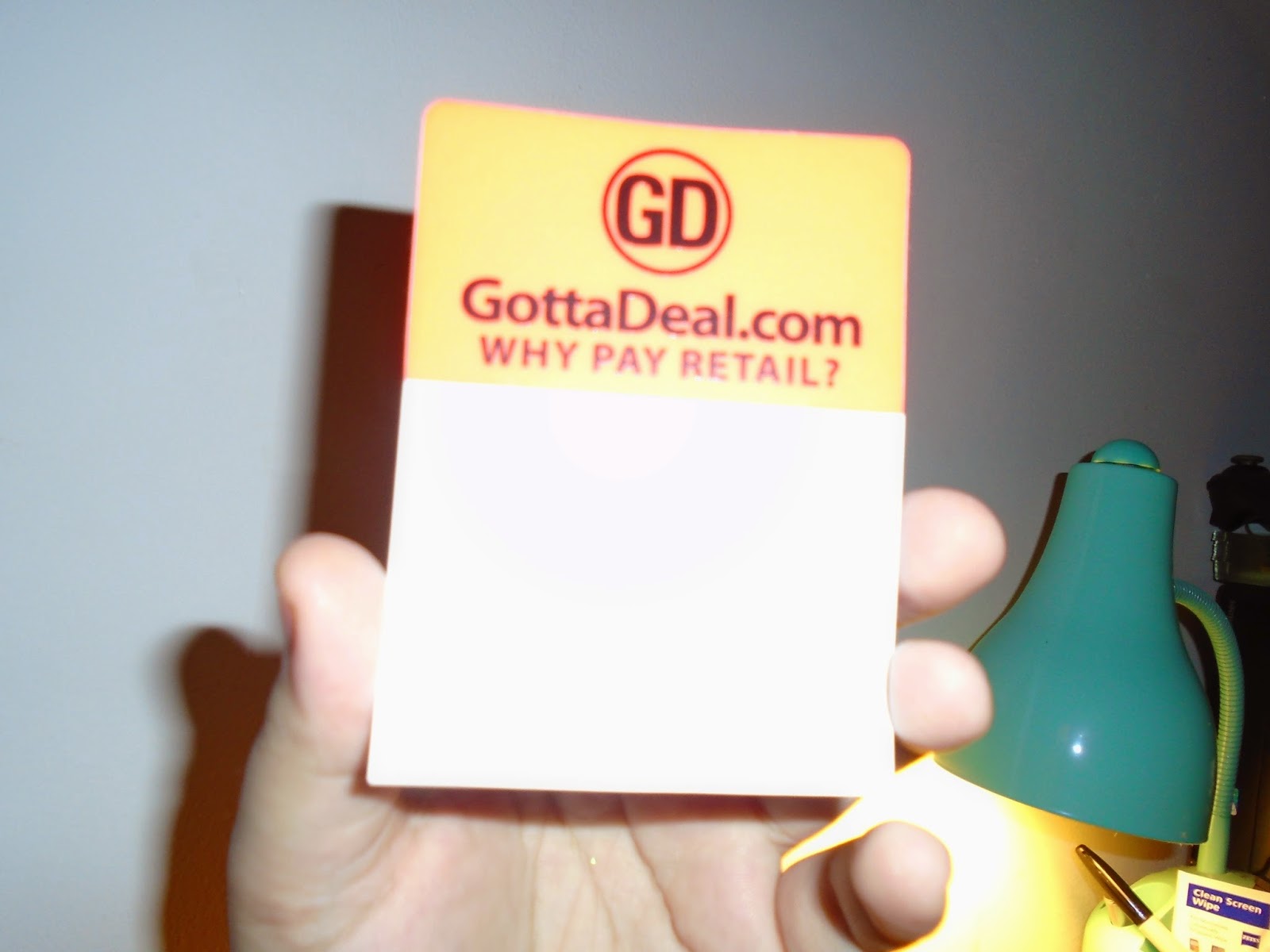 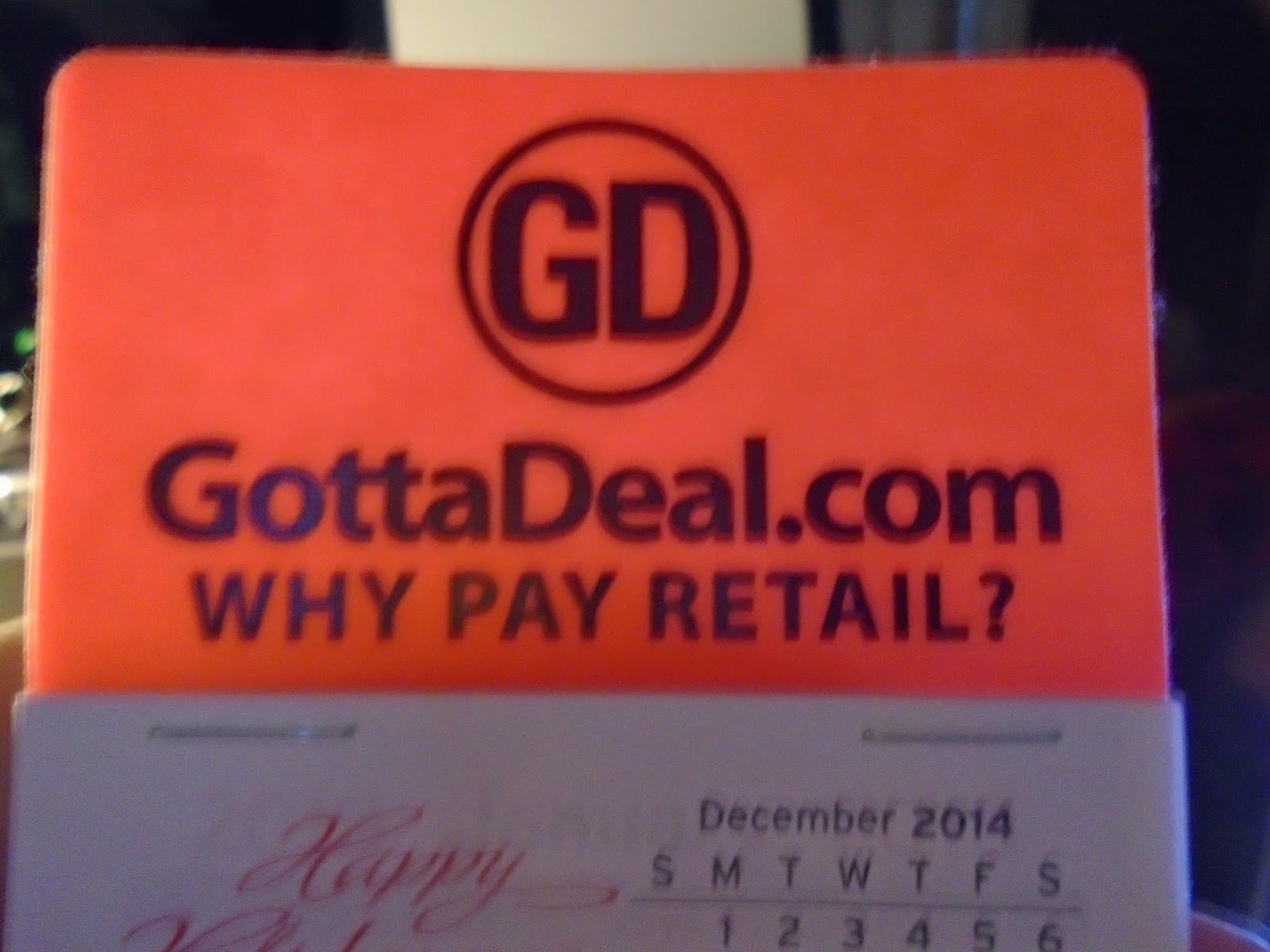 A couple months ago, I won a t-shirt from the website Gottadeal.com.  I go there every year to see the Black Friday ads, and usually win a t-shirt.  This year I also got a mini calender for 2015. It's nice to have especially when I'm not at the computer.  The site is good to use all year round too.  My favorite part is the Target Perimeter Perusing which lists posts from people on the message boards and what they found on clearance at Target.  Anyways, I thought I'd show it.

That will wrap it up today, thanks for reading and have a great day.