Remember when I use to write about the Royals?

Once upon a time, I wrote about the Royals on this blog.  I think today is a good day to do that again.  A couple months ago I scanned a set I wanted to talk about and would have likely done it last month.  So I think I'll do it today. 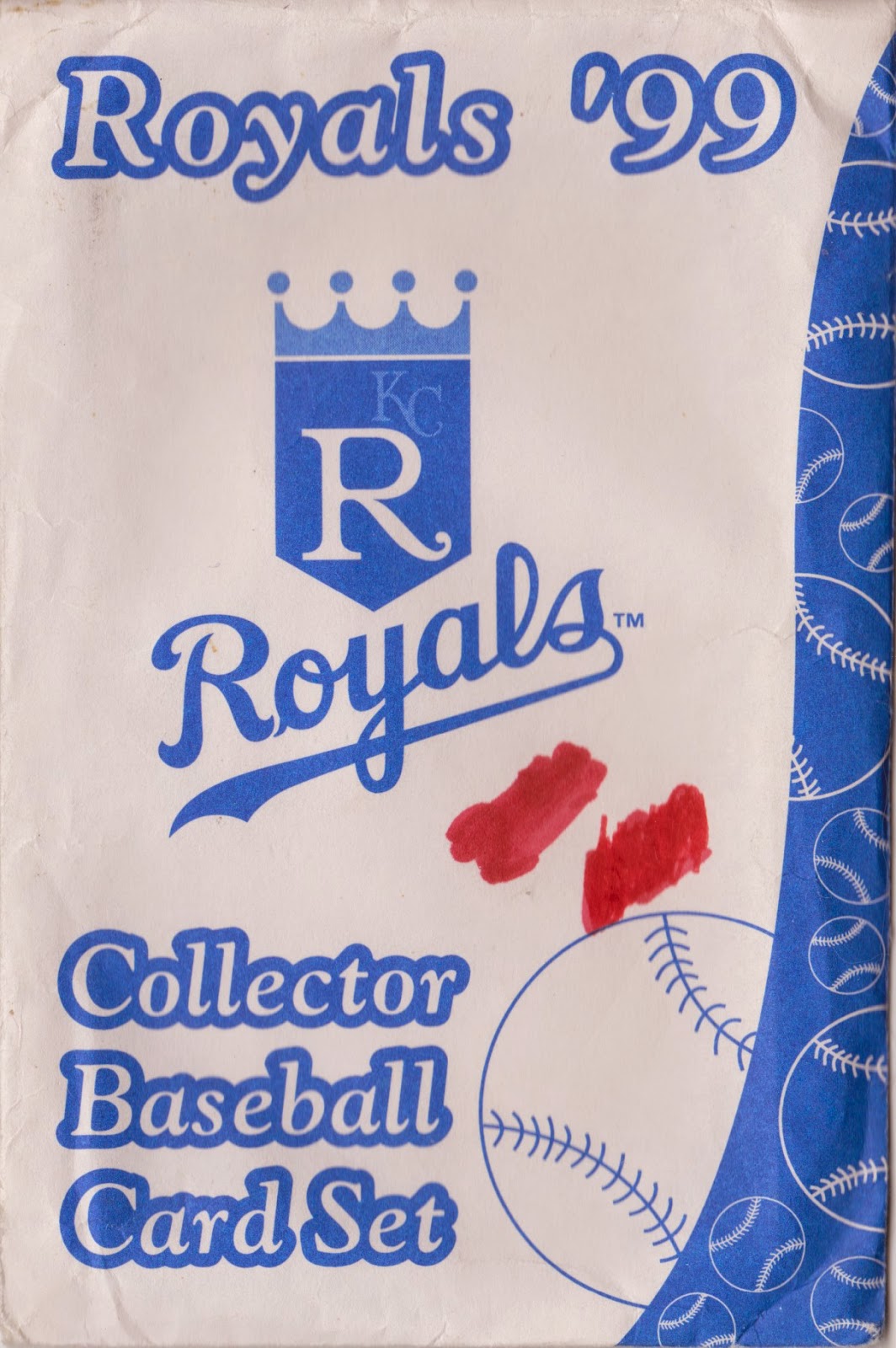 Nice envelope this set was included it.  I can't remember if this was my dad's or if I bought this off ebay.  I think I bought it off ebay a few years ago. 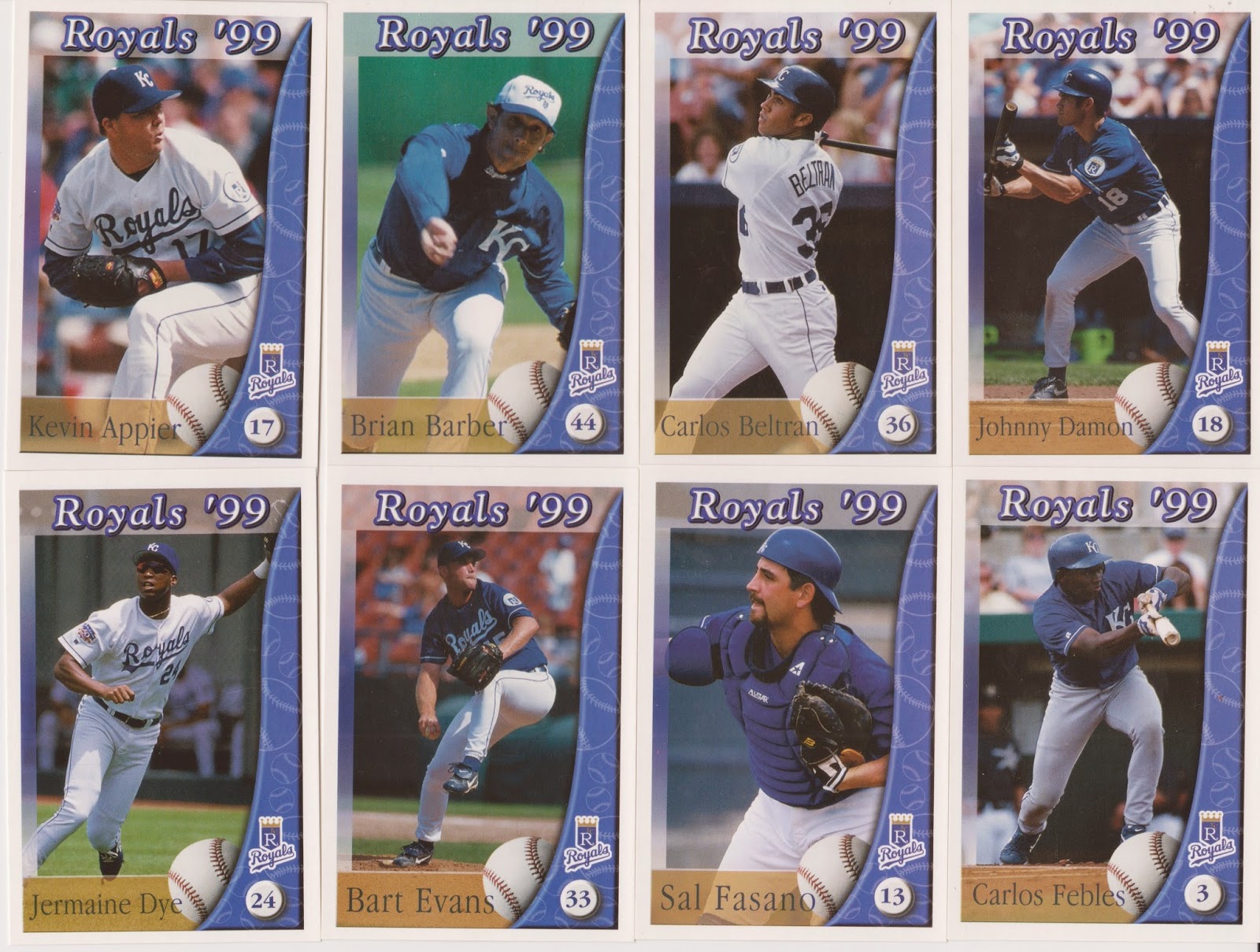 It is a 1999 set from Kansas City Life Insurance company.  Since they fit nice in the envelope, I can't complain too much about them being oversized.  I don't remember much about the 99 Royals off the top of my head, but remember listening to the games on the radio and seeing highlights on the news.

Look at these names!  Appier! Beltran! Damon! Dye! I liked them all.  I even liked Sal Fasano and Carlos Febles.  I remember Brian Barber, but not enough to remember if I was a fan.  I don't remember Bart Evans though. I like how they have on various uniforms, telling you it wasn't pictures from just one game. 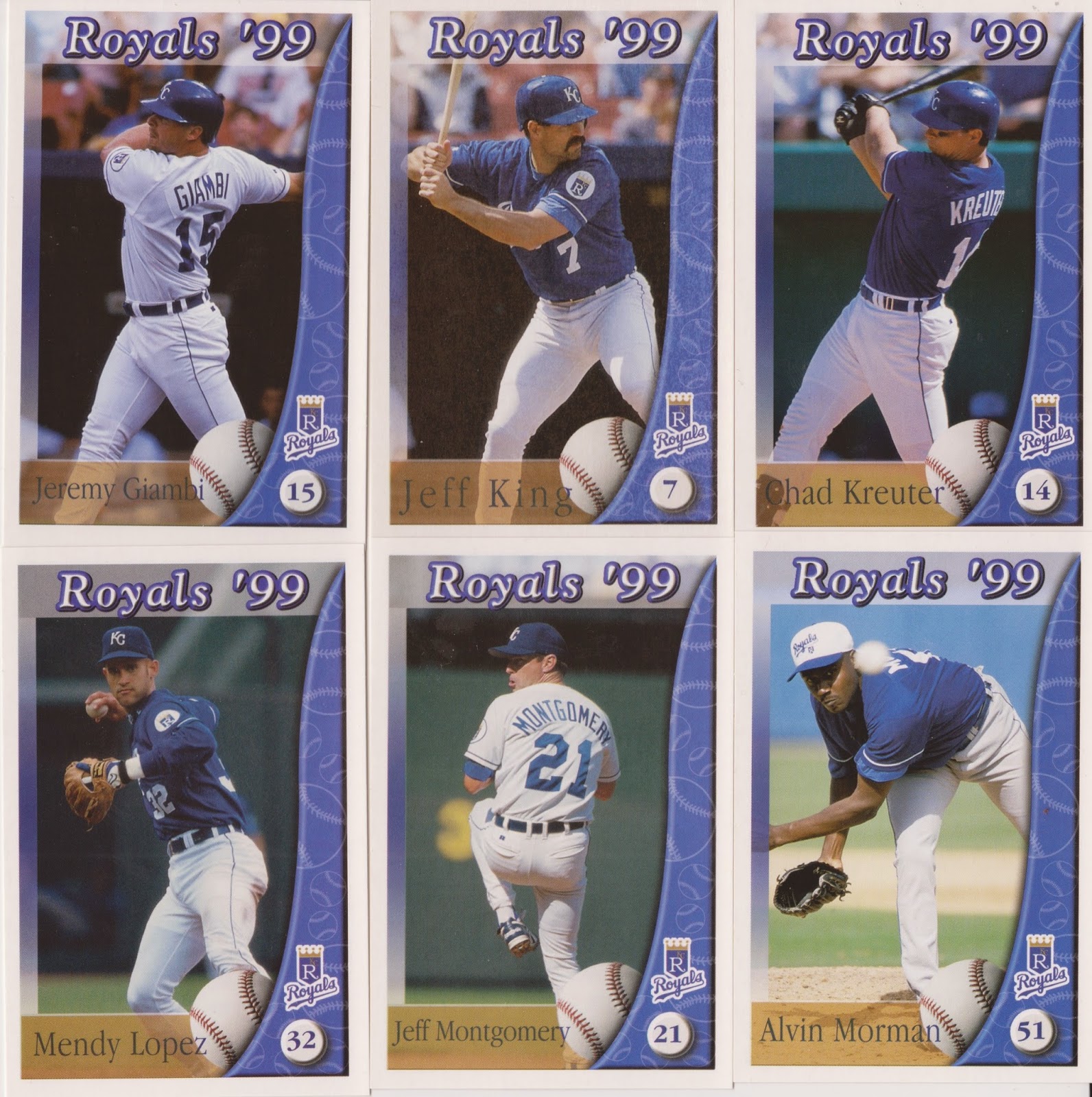 More names people have heard of- MONTY! Chad Kreuter will be forever thought of as a Detroit Tiger to me, I always forget he was a Royals player at one point.  I think of Jeff King more as a Pittsburgh Pirate but do remember his time in Kansas City.  Whenever I hear Jeremy Giambi's name these days I only think of Moneyball.  In no way do I think he could be as good as brother Jason (with or without steroids), but I do think he could have had a better career then he did.  Like Barber, I remember the name Mendy Lopez, but not much of his play.  I don't remember Alvin Morman at all. 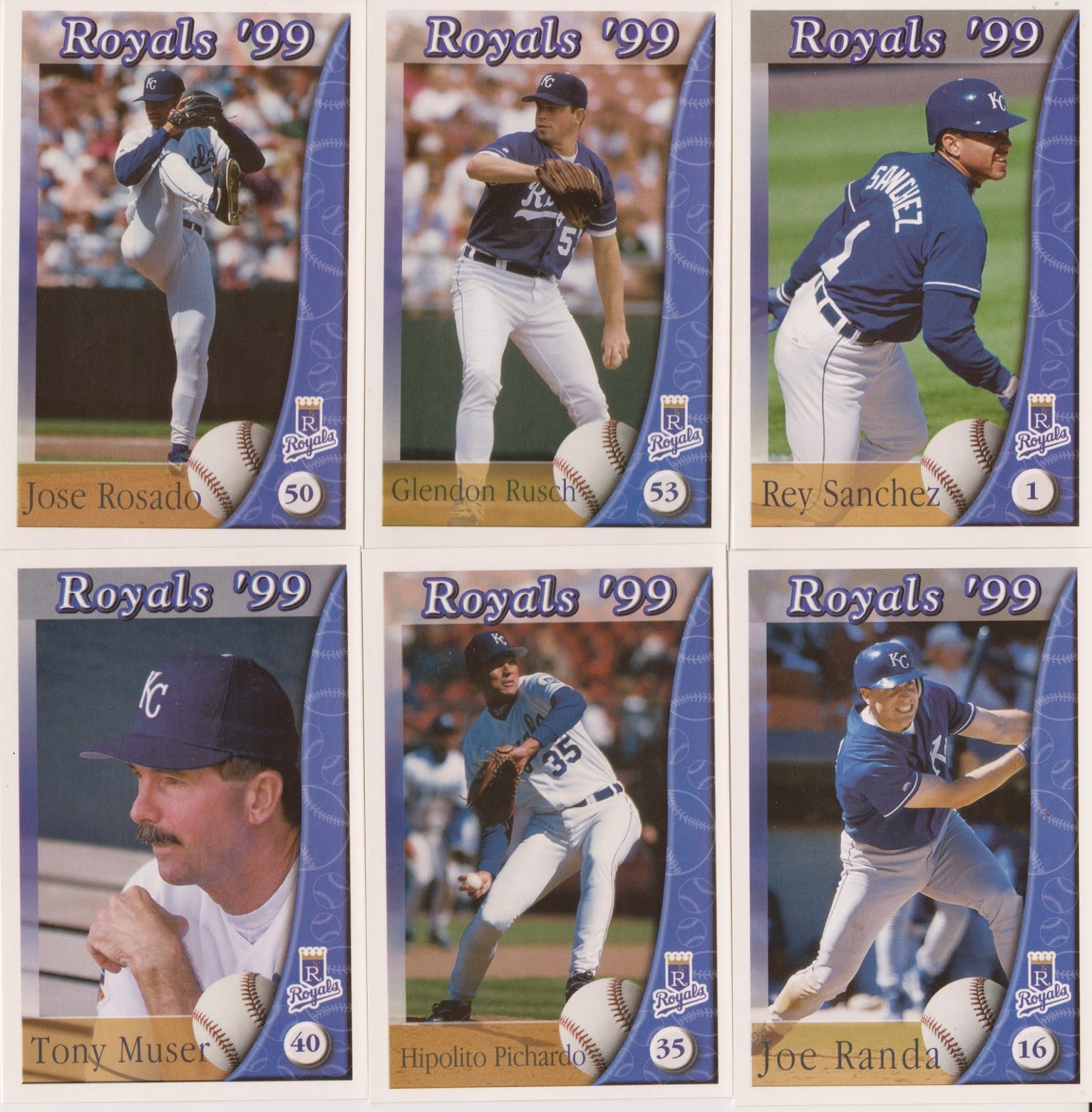 Kansas City had some names in 1999.  I remember all of these guys.  I think we got the most out of Glendon Rusch even though he had a better career with the Mets.  Rosado and Sanchez were players I liked as Royals but never followed too much.  I liked Hipolito Pichardo mainly because of his name.  He did a pretty good job for us too.  Tony Muser wasn't as good as Hal McRae was as manager, but I thought he could be an okay manager, it just didn't work out in KC.

Joe Randa is a nice card too.  Besides the obvious Damon and Beltran cards, this Randa card is another nice addition to my collection.  A while back I decided to stop collecting Jermaine Dye cards not associated with the Royals.  My main focus will be on mainly only Royals cards, with exceptions made for Damon, Beltran, and Greg Maddux (a few others too).  I think I will add Joe Randa to that list.  It's not a lot of cards to search for and he's not the biggest name so it shouldn't set me back to much when I find them. 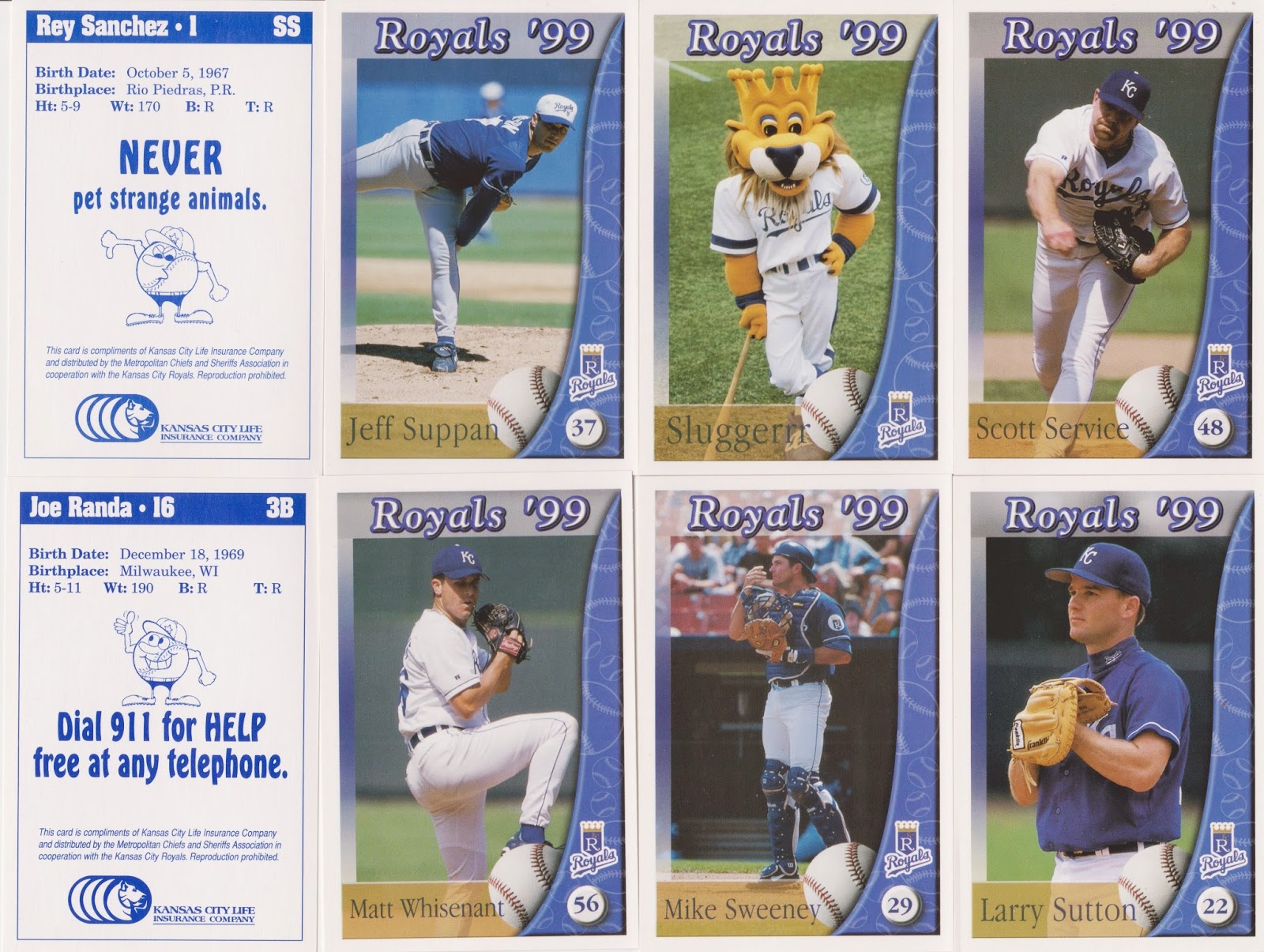 I thought I would show off the back side of the cards.  I chose the Sanchez card because I thought the tip was a bit funny.  I know it shouldn't be but it made me chuckle.  I chose the Randa just because I had just scanned it.

Jeff Suppan had a lengthy career that seemed to get better as he got older.  I wasn't ever a big fan of his in KC because I didn't think he was that good.  He kinda proved me wrong.  I remember the names of Scott Service, Larry Sutton, and Matt Whisenant, but not their play.

I like the Sluggerrr card a lot.  Most likely one of his best serious poses ever.  Finally is the Mike Sweeney card.  I almost forgot he was once a catcher.  I've stated many times that Billy Butler reminded me a lot of Sweeney.  I think fans were disappointed when in both cases the Royals chose not to resign them.  They deserved better, but from a team standpoint I understood the decisions in both cases.  I think we got everything out of them as we could and chose not to overpay to keep them.  The only difference is that Billy Butler is a little younger.

I will talk more about Butler in future blogs, as well as the rest of the Royals offseason talk.  I also plan to start writing more blogs soon.  I will give a heads up though that I might be away for a while again soon (hopefully not until after the new year).  This time it is an issue with my laptop.  It has been giving me a bit of trouble lately, so since its still under warranty I might ship it off.  I have a desktop that I can use but I'll have to run a cord across the room and that will likely keep my internet usage to a minimum.  I'll give a heads up though before I do all that.

Anyways, thanks for reading today and have a great day.