Indy Wrestling is where its at...most of the time.

Sorry for the delay, sometimes I have to be in the mood to write.  After I got my internet back, I have been slowly been getting back in the groove of things.  I did manage to update a couple things on my wants and completed sets, but otherwise with my money being really tight, I haven't been adding cards to my collection.  So today I will have another blog I wrote while I didn't have the internet turned on.  It is fairly long, so I hope it will hold you over for a bit.  Once I hook my scanner back up and get my groove back, I should post more frequently.  I have spent time working on the Trading Card Database, so at least I am paying attention to my cards.

I have always been a big fan of professional wrestling.  I remember seeing Ric Flair on TBS being interviewed with the NWA Title.  WOOOOO!  We never had cable when I was little, and then we moved out in the country, and still never had more than basic 4 channels.  The highlight for me was Sunday nights I would get to watch WWF Superstars on my local NBC affilliate, KOMU.  I remember seeing Money Inc., The Steiner Brothers, and many more.  They once showed where the two tag teams traded the tag team titles at house shows during the week.  I never got to see PPV's, so one hour a week with what was just squash matches was fine with me.

I could write much more on this, and might one day, but for now I will skip ahead about 8 or so years.  My dad knew I was a big wrestling fan, and he would tell me stories of him seeing wrestling when he was younger.  The likes of Harley Race and so on.  My dad took me to a wrestling show a few times, the first couple times I'll talk about today, and show off the program from one of the shows.

Don't get your hopes up expecting to see superstars in these photos.  The first two shows I went to were of a small time federation from St. Louis making their way around different places, and they made their way to Boonville a total of 3 times.  I missed the last time, and while none of these guys never amounted to much beyond this federation not much bigger than a backyard federation, I still had a blast. 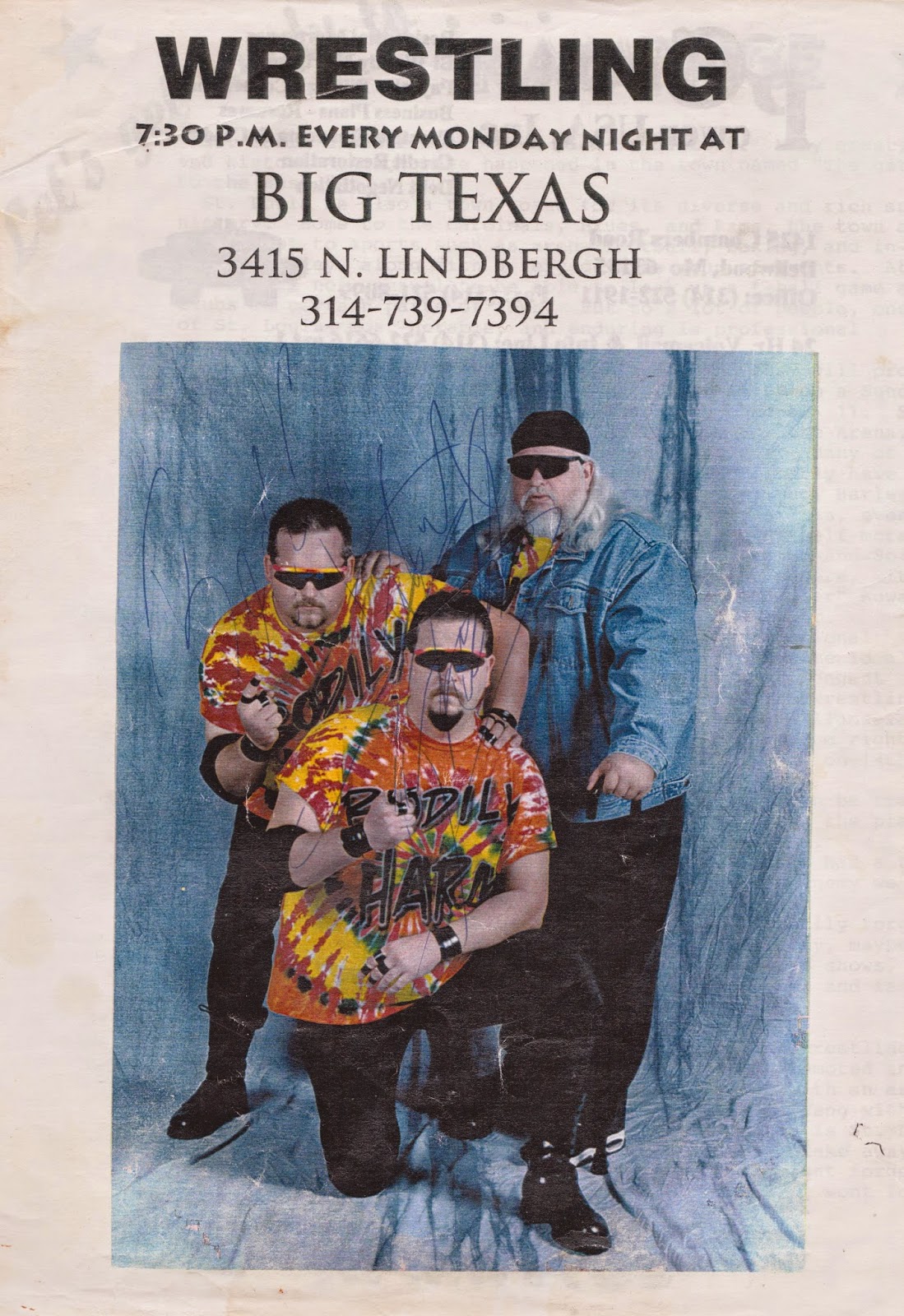 We begin with the cover of the program, which if you look closely you notice two things- one, its signed, and two, the federation isn't really named.

I found out years later that this federation went through many name changes (which even happened between the couple months between these shows), so I assume they just put wrestling with no real desire to change the programs each time they changed names.  Big Texas was (and possibly still is, I don't know) a bar in St. Louis.  Lindbergh is a pretty popular and well traveled road, so I assume they did decent business.  The guys on the front are the tag team Bodily Harm along with their manager Pappa D.  My assumption was always they were a knockoff of the Nasty Boys, but I could never tell.  They played a basic heel tag team, which is fine since you shouldn't expect too much backstory on indy wrestlers.  I'll talk about them more in a little bit. 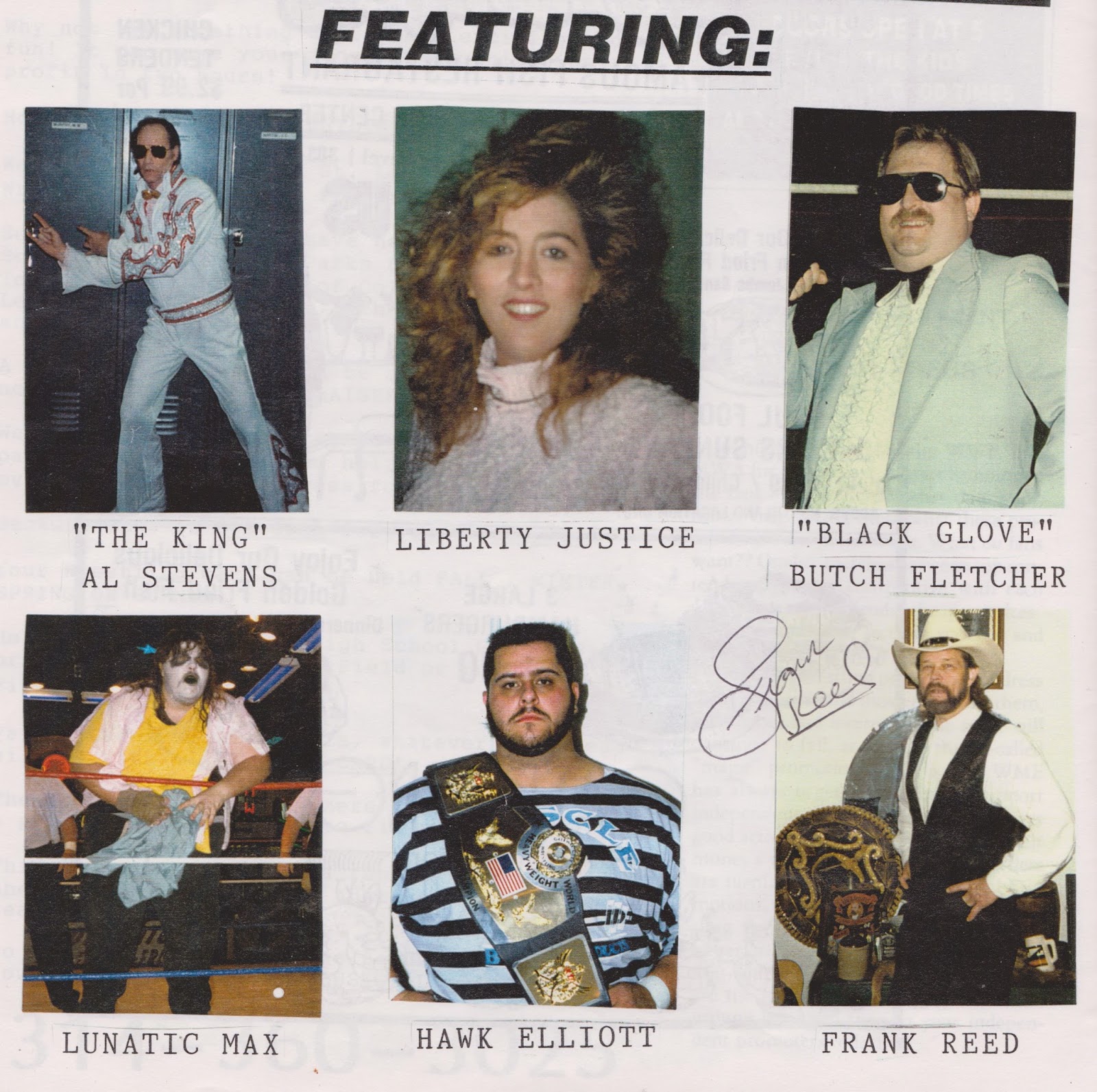 Alright let's look at the roster.  I didn't get to see all of them, which is fine, but would have liked to know more about them.  We start with a guy I never saw- "The King" Al Stevens.  I have a good idea what his gimmick was, and am fine with missing out.  Next is Liberty Justice.  Liberty worked the admission gate at one or both of the shows we went to, and I think was the only female on the roster.  She was featured a few times in the program so either she had her hand in the company as more than a performer, or they knew they needed a pretty face to make some money.  Either way, she was nice when we talked to her.  I think she could have been a decent manager, but not sure what she did since she didn't really appear in the ring the two times we went.

I saw Butch Fletcher, he was a manger, but I forgot for who.  He did fine as a manager though.  Lunatic Max was a 500 pound wrestler who if I remember right brought a pillowcase of weapons to the ring for his matches.  While reading about this fed a few years back, most people who were fans noted that Lunatic Max was the worst wrestler they ever saw.  He didn't sell moves and had no real moves of his own.  I imagine it was a case of he was big and local so they used him.  I think if trained right he could have been used as a special attraction.

Next is the champ Hawk Elliott.  I can't remember if he was at both shows, but he was indeed the champ during both months (by the way, the belt is so 80's, and this was in 2000).  I can't remember much about Hawk other than him clearing the ring of the bad guys once.  He would have been a guy I'd like to see more of just to see how he did.

Finally is Frank Reed.  I got his autograph!  Frank was the guy in charge of the federation, and I've read mixed stories about him.  Most of the small time little feds in the St. Louis area in the 90's and early 2000's seemed to be run by Reed.  I got Reed's autograph after the show.  My dad went to the car so I tried to find people to get autographs from and found him.  The second the building started to clear he was already getting his guys to tear down the ring.  I understand the rush, its about 150 miles from St. Louis and it was getting late so they were in a rush.  Though my negative was that before the fans cleared out, he was already counting the gate in plain view.  Like I said I know he was strapped for time, but I would figure he would do it somewhere not everyone could see him.  It was at this point when I asked for an autograph, and he wasn't too welcoming.  I'm not too mad at that, the show was over, but overall the entire experience left a bad taste in my mouth. 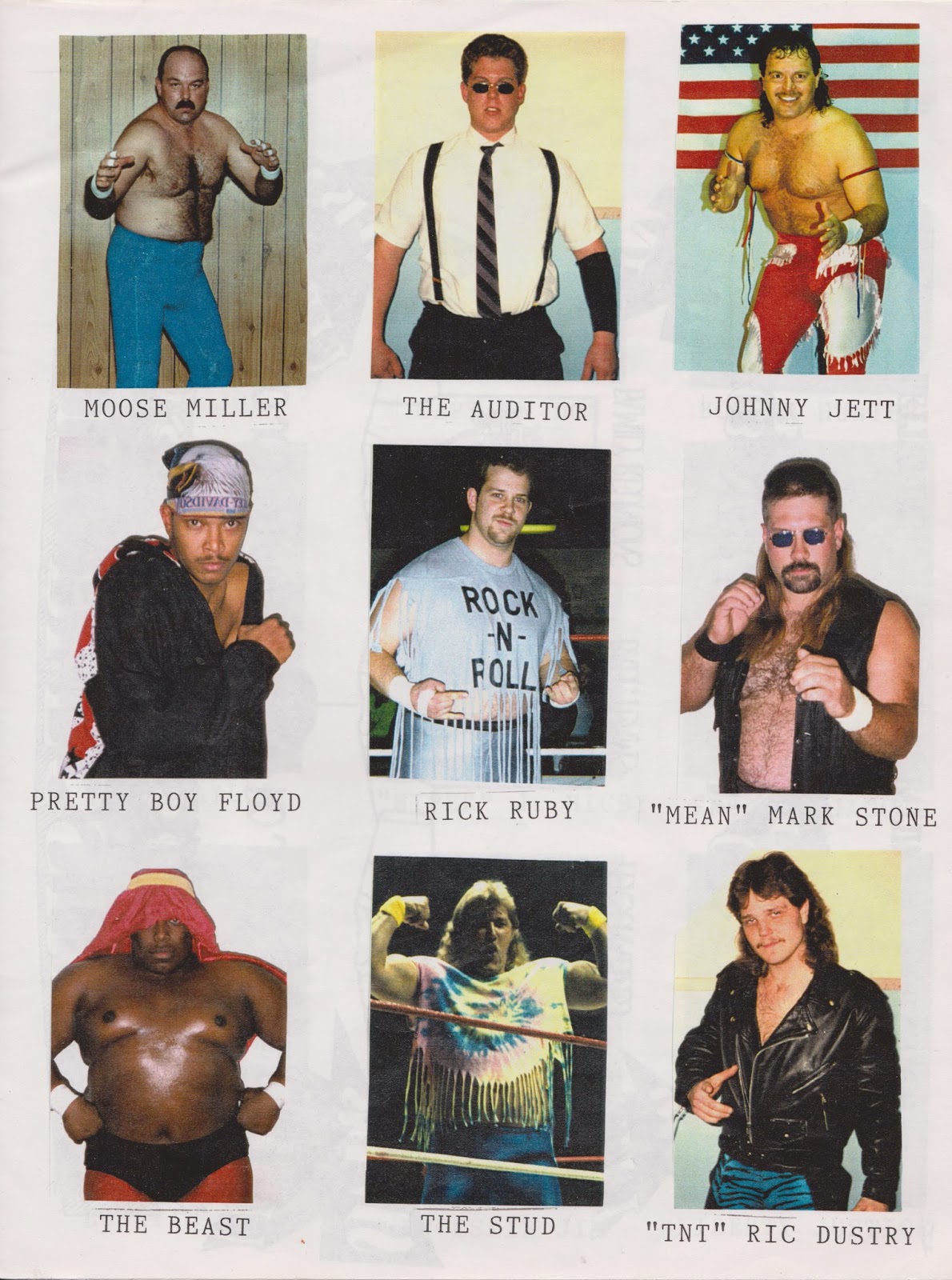 Out of these guys, I don't remember seeing The Auditor (a ripoff of I.R.S.), Rick Ruby, "Mean" Mark Stone, or "TNT" Ric Dustry.  Matter of fact the only two I remember anything of was Johnny Jett and Moose Miller.  I saw Pretty Boy Floyd, The Beast, and The Stud because I have autographs of them (I'll show the back page later), but no memories otherwise.

When I first got the program and was going through it, my dad said he remembered Moose Miller wrestling years earlier. I have never found anything about the guy, so I can't say much on who or how good he was.  This fed used him as a referee.

Johnny Jett was likely one of my favorites among the good guys (and probably 3rd favorite behind Bodily Harm).  The flag in the background wasn't just to make the picture better, I found out a few weeks ago that Johnny Jett was a veteran in one of the branches of the military (I'm writing this while I have no internet service, so I can't fact check).  He had a lot of charisma and I thought if anybody would make it out of this fed, it would be him.  He seemed like a really nice guy. 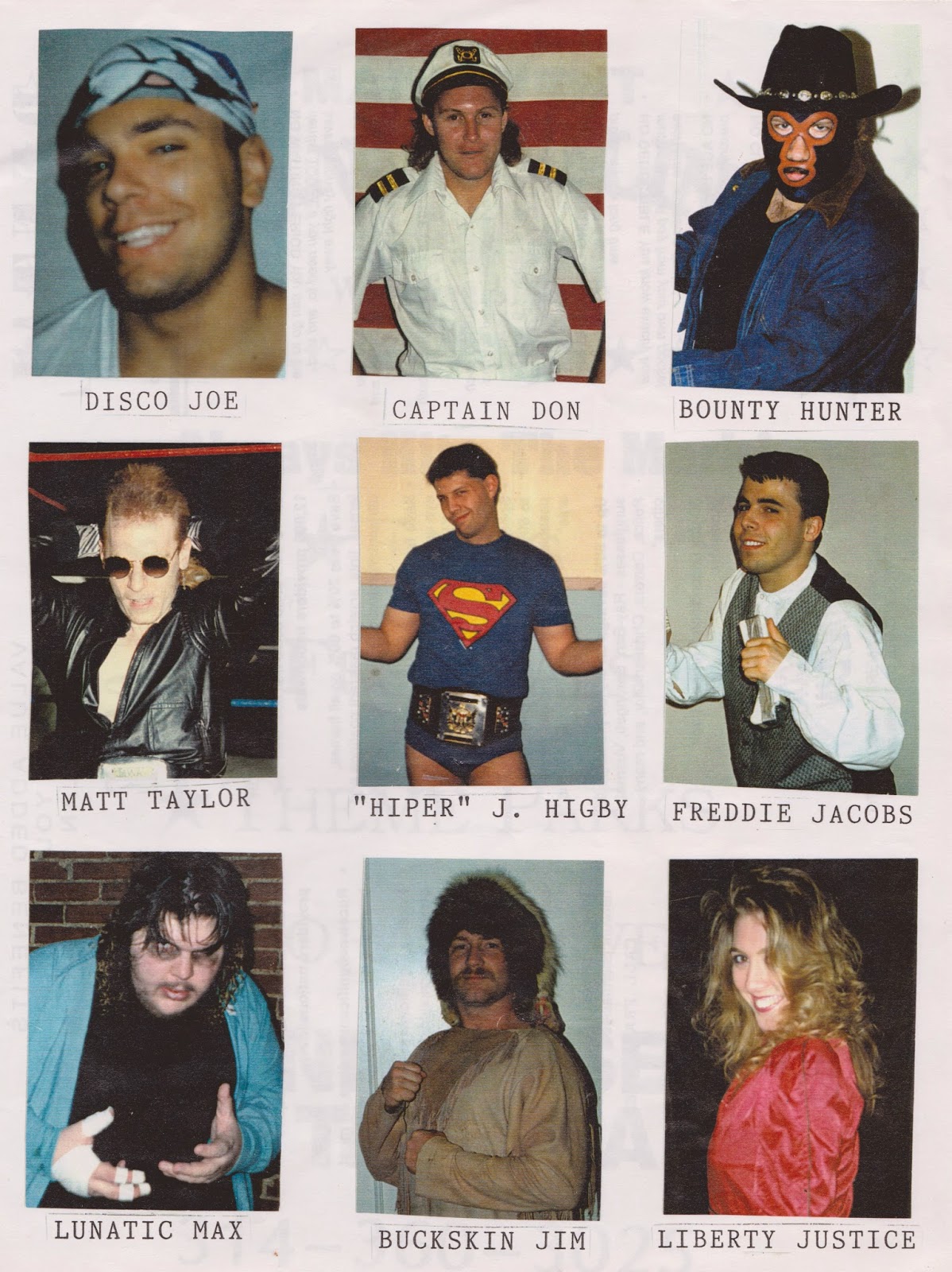 Ok, more guys I don't remember and a couple with multiple pictures.  Lunatic Max and Liberty Justice must have been friends with Frank Reed.

The only other two on this page I might have seen was Captain Don, and Disco Joe.  Freddie Jacobs has the worst wrestling picture pose I've ever seen.

Nothing else needs to be said about these guys. 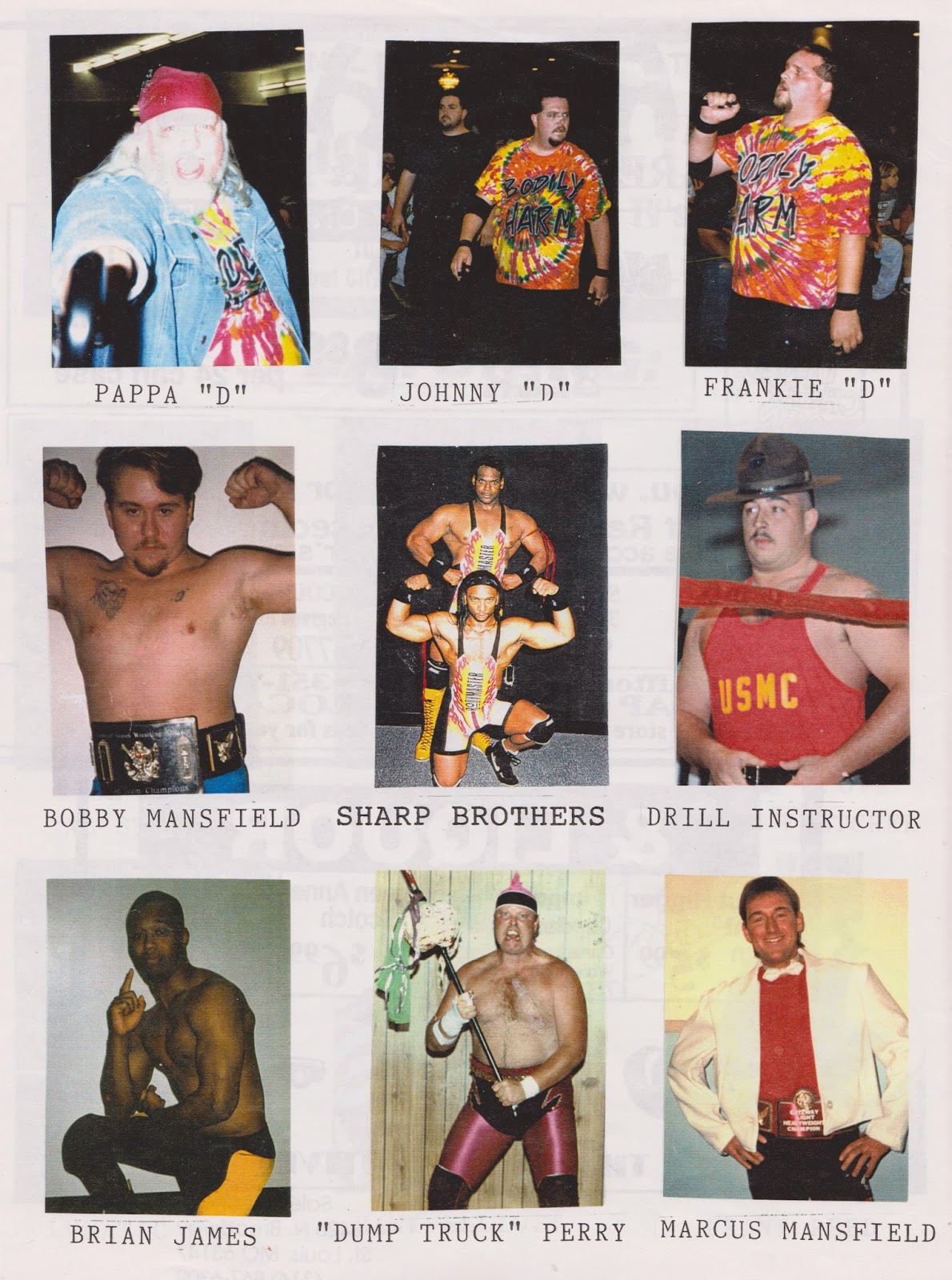 Now these guys I think were all there.  Bobby and Marcus Mansfield were brothers if I remember right.  Dump Truck Perry might not have been there, but in the progam I did get a full page photo of him (the exact same as in this scan).  Brian James was a pretty good wrestler.  He was another one I thought might have been able to make a name for himself.  The Sharp Brothers were okay too.  I don't remember much about them, but I think they might have been in a 6 man tag with Brian James.

The Drill Instructor was good friends (at least in the ring) with Johnny Jett, and was a real Marine.  I don't remember his wrestling much, but looking back I find it odd for him to be a good guy with such an intense gimmick.  He was a nice guy too.

Okay, it's Bodily Harm.  I found out years later there were many versions of this tag team including one that included future WWE wrestler Trevor Murdoch (I wish I saw him at these shows, but I did see him on a WLW show which I'll write about another time).  The appeal might have only been the tie dye shirts.  They had some good charisma, and were the most hated among the fans at the show.  They were also involved in the best storyline of the shows, including one where they were arrested by the local Police.  It was well planned and worked out perfect.  They did a post match beatdown, then the back door opened (it was at a National Guard Armory), and a Boonville Police car pulled in, and they arrested them!  The good guys won, and the bad guys went to jail, a great finish to a show!

That was the second show we went to, the first show was when I got the autographs.  What was cool about the first show was I was the only fan rooting for them.  I held my program up and had a 1 finger up "we're #1" when they walked by.  As everyone else booed them, they walked right by us and pointed at me and said "This kid knows what he's talking about".  It was pretty cool.

The second show had some newer wrestlers so I imagine there was a large turnover of wrestlers at this fed, but it was cool.  Osiris and Ty Dalton wrestled at the second show, and it was the best match between the two events.  Ty would a few years later become the WLW champion (I wish I got to see him in WLW). 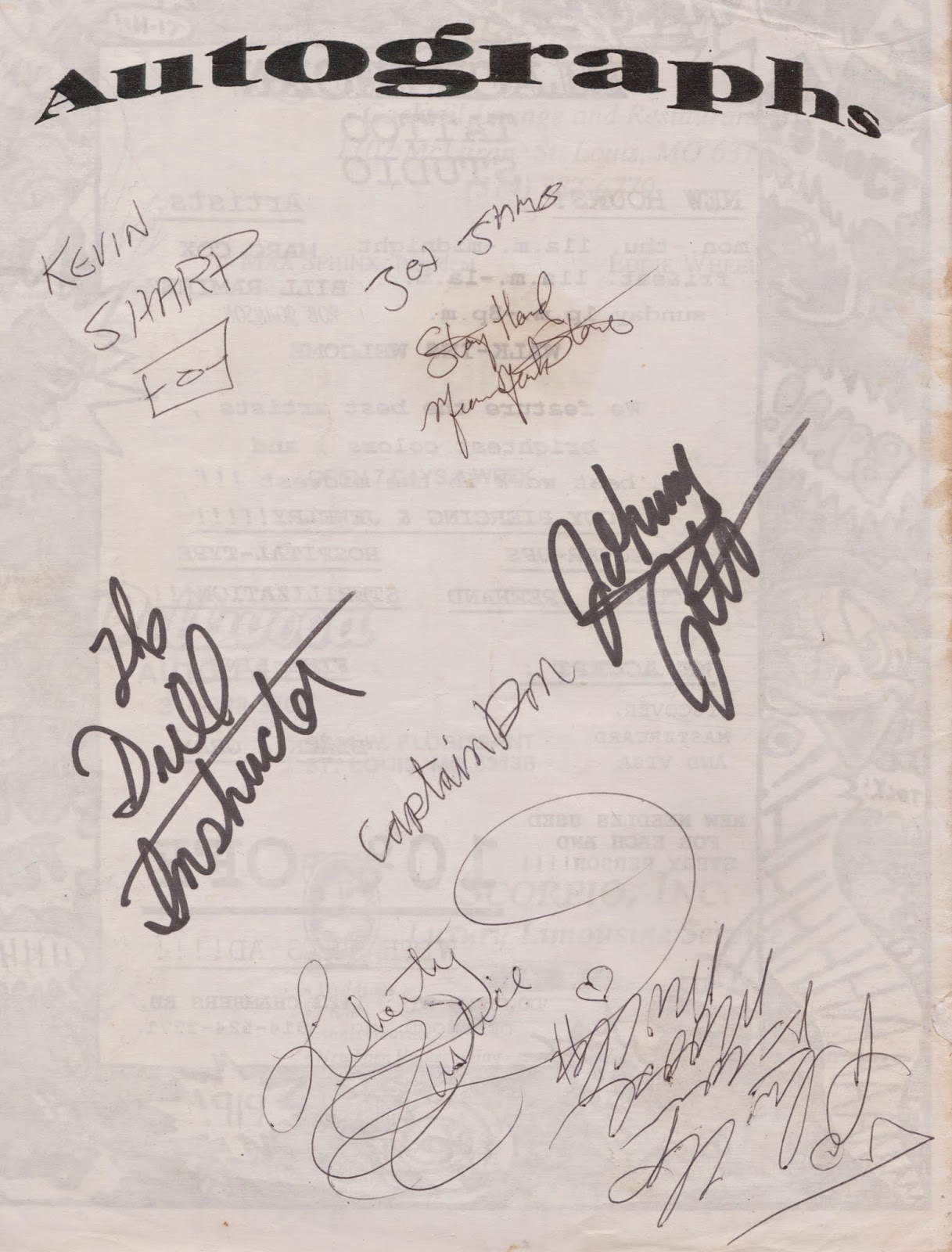 Okay here are the other autographs I got.  Kevin Sharp, Mean Mark Stone, The Drill Instructor, Johnny Jet, Captain Don, Liberty Justice, Moose Miller, and I'm not sure at the top, I think is Brian James, signing as Jet James.

In the future I'll write about the WLW show I went to and the few WWE shows and the TNA show I went to.  If you have never seen a live wrestling event and are a fan, you should check it out once.  The memories last forever, and you never know who you might meet.