I could have put these last two posts together, but felt it was better to spread it out.  At any rate, here is the final batch of cards I got from Just Commons.  After processing took a week, it shipped pretty fast I thought, faster than normal.  Also on the plus side is no mistakes, this is the second straight big package where they didn't send me the wrong card. Anyways, here they are. 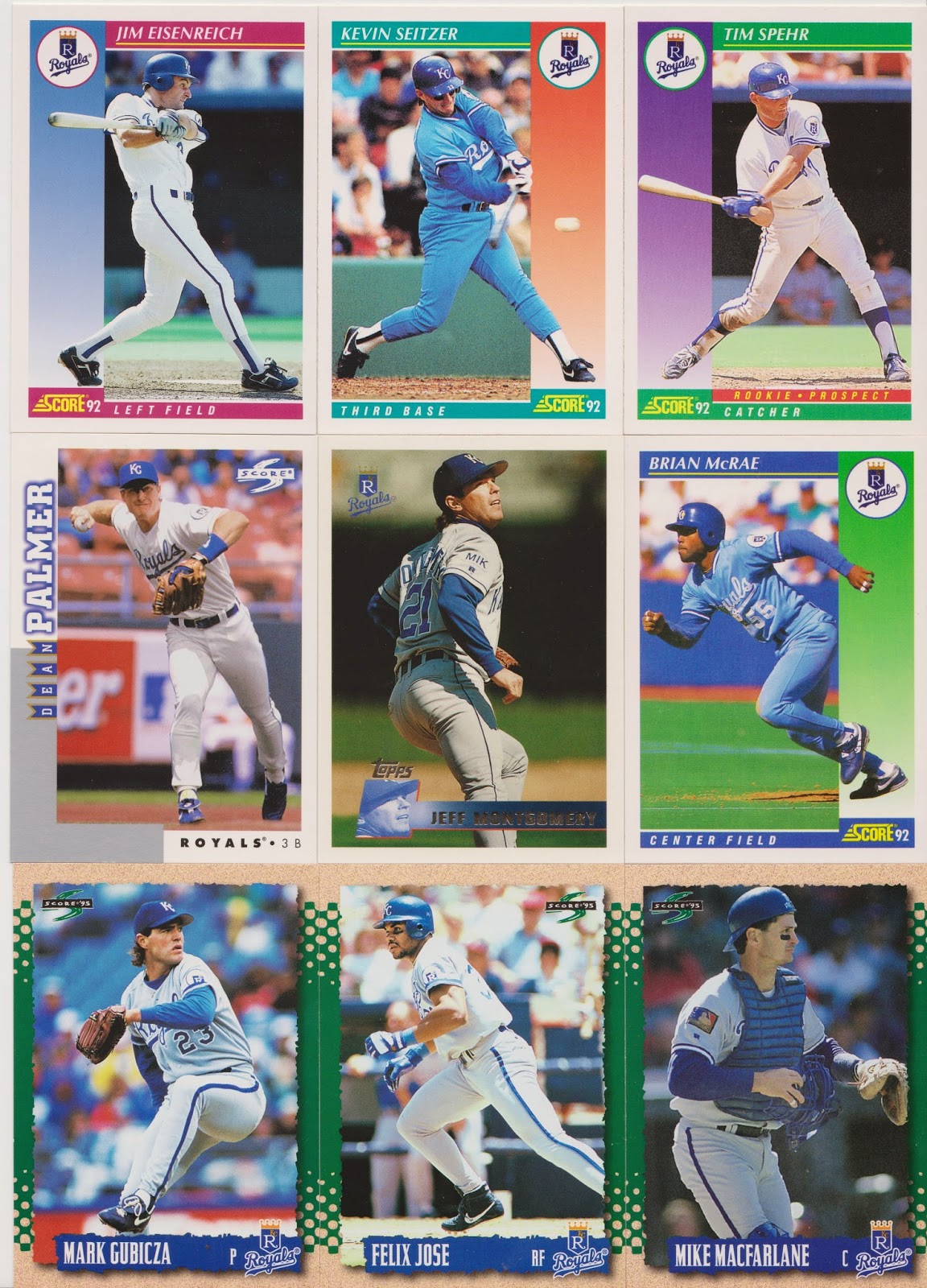 1992 Score always works for me.  Love the Seitzer and McRae cards just for the uniforms.  More Score cards with the Dean Palmer card. This was about the time I stopped getting into Score.  The designs just weren't doing anything for me anymore.  I did like the Score cards shown on the bottom though.  I had a few of these.  Deciding 8-10 cents a cards isn't worth passing over, I got these to add to the collection.  In the middle is a Topps card of Jeff Montgomery, which likely insinuates that Topps is the Alice to the Score cards, the one truly in charge and keeps the peace in the card collecting world.  Maybe I'm reading too much into how I placed these cards on the scanner. 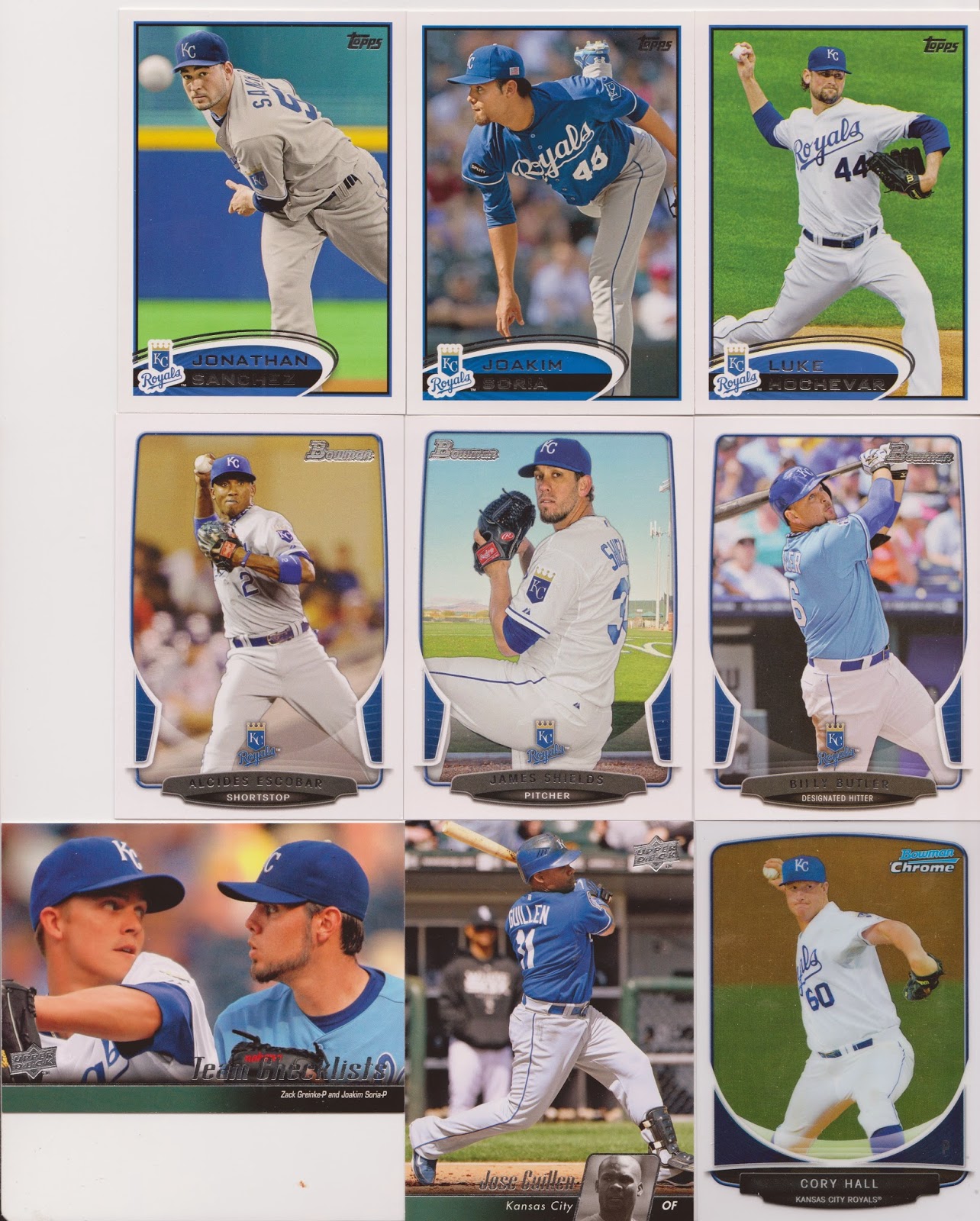 The ugly Topps cards.  I'll be honest, if this was the set that came out when I was getting back into cards, I likely wouldn't have this blog today.  This set is my least favorite since probably the 2008 set.  I just never cared for the design.  However, I needed to complete the team set, so I worked on it some.  Maybe next time I'll get the rest of the cards just so I can store them in a box and forget about them.

Underneath them is a Bowman set which I did like.  People seem to be talking about how Bowman isn't that good these days, but I must admit, I usually like there designs better than Topps.  My only problem is I don't care for Chrome as much as most people, and I hate how Bowman has 15 different sets dedicated to Prospects all names... PROSPECTS!  They just use different numbering to differentiate the sets.  Here's a hint Bowman, if you need more than two letters added to the numbers, its too much.  BDP15 isn't the same as BDPP15, and heaven help us is you see BDCPP15.  Within twenty years Bowman will be like Crayola, making up new number (in Crayola's case colors), nobody cares, wants, or needs to use.  Sorry, off tangent, back to these cards.  I got some nice players at least, Escobar, Shields, and Butler are a nice punch.

On the bottom first is one of those Chrome Bowman cards, this one of Cody Hall.  I swear these cards multiply like jackrabbits.  I really thought I had this specific card before, many times over, but my sheet said no, so I bought it again.  Beside it are a couple Upper Deck cards I bought strictly to finish the set (not there yet).  Really I like the design, but wish they could use the team names on the cards.  I also wish it was a slightly smaller set.  Upper Deck didn't have a license yet felt it was worthy enough to produce 1000+ card sets.  Thats a bit excessive.

That's all the Royals I got from the batch, but did get a couple non-Royals.  Here they are. 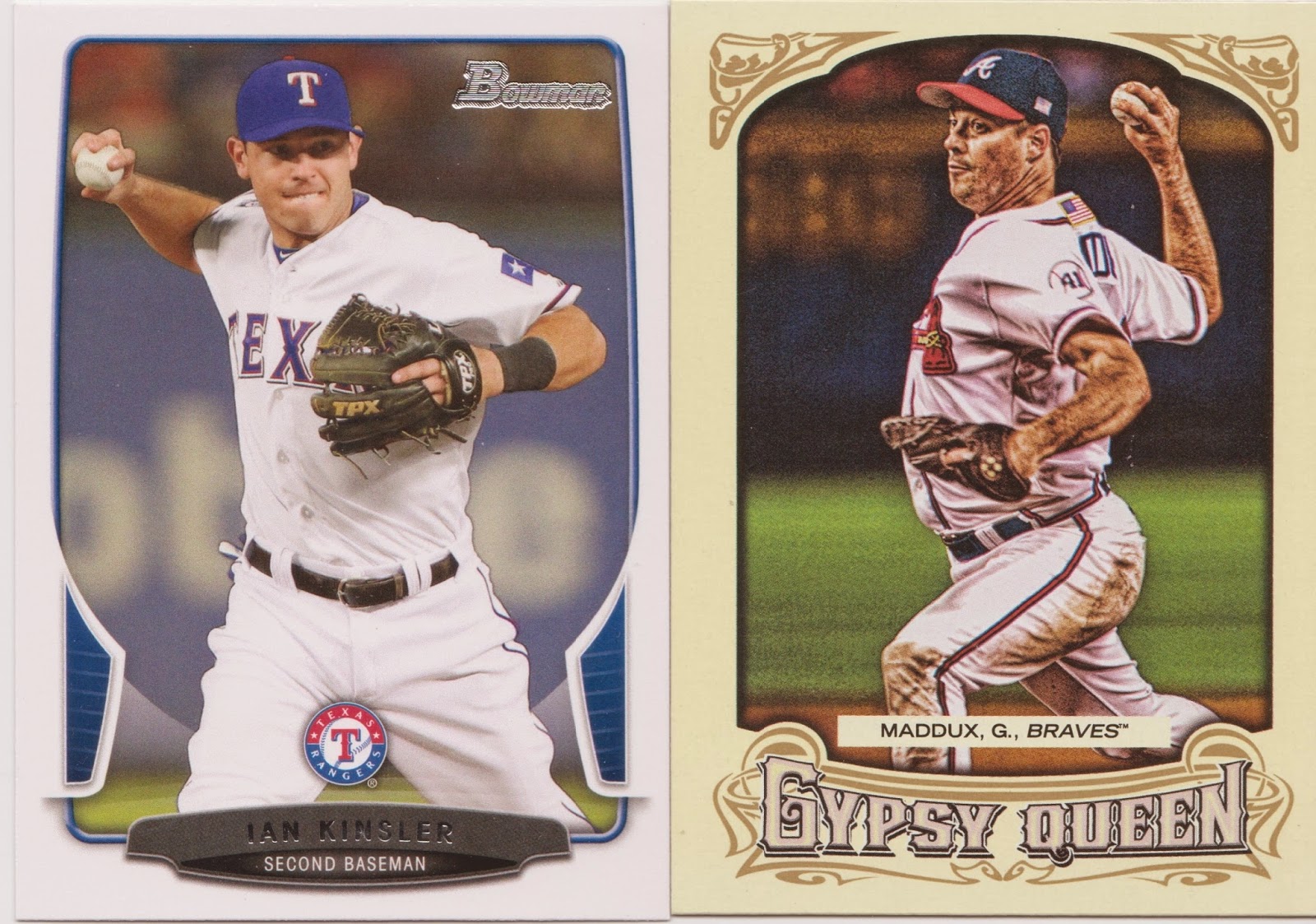 An Ian Kinsler card I needed will look nice in my Mizzou collection, which I should work on some, but not until I get caught up with the Royals.  A nice card, but wish the logo was a bit bigger and wasn't placed on top of his crotch.  I imagine in a few years, sponsors will be covering the jerseys in all kinds of spots anyways, so it shouldn't stand out too much.

I added a Greg Maddux card just because it was cheap.  At this point, I only seek his cards out if they are cheap. Again it will be a bigger priority once I work on the Royals some.  Still not a Gypsy Queen fan, but this is a fairly nice card.

That's it on the Just Commons package.  I still have a couple more scans to show just because I don't think they need their own post so here they are. 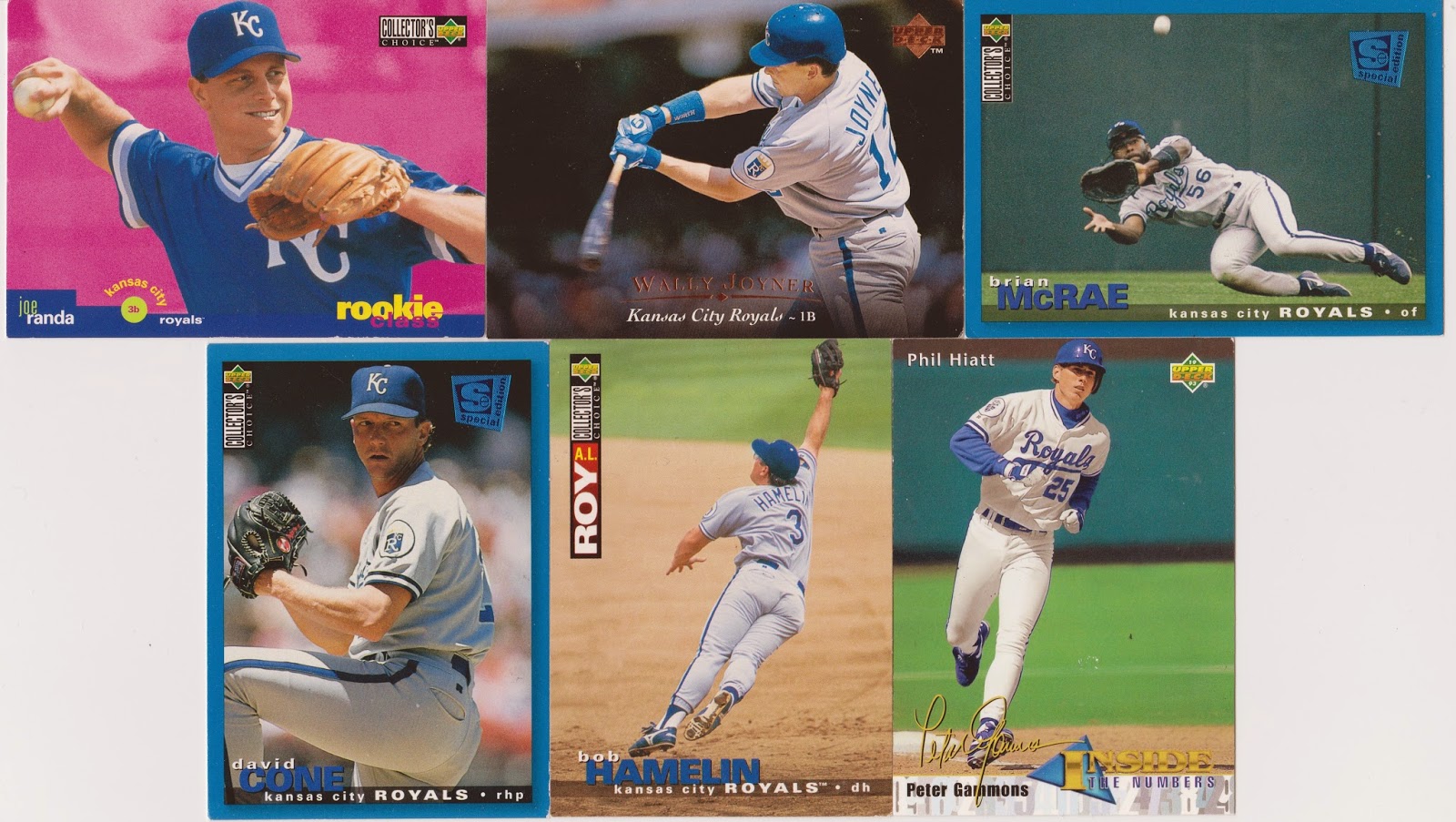 I won this on Listia a while back pretty cheap.  I didn't get it for the Phil Hiatt (which I went from 0 to like 5 in three months), but because I knew I had very few SE Blue cards.  The David Cone card is the one that stands out here, and adding another Bob Hamelin is nice too (which is even better as he is playing in the field as opposed to his usual DH spot).  I got these for 499 or less (too lazy to look up), so I felt adding these were a no-brainer.

The last cards were also a cheap listia win.

Normally Ryan Howard wouldn't fit into my PC's, but he falls into the Missouri State collection.  It's not very big, with 98% of the cards being Ryan Howard.  I have no desire to expand it at this point, but there were cheap and I knew I needed them.  I guess the bright side of his complete downfall in the last few years is his market for cards is dropping, which makes it easier to find great deals on his cards.  There were rumors the Royals would have traded for him if Philly ate most of his contract.  At first I hoped they did, but I'm glad it didn't work out.  I'll still be a Howard fan no matter what.

Well that concludes my package from Just Commons, I hope you enjoyed them.  Have a great night!