It has been a crazy opening week of baseball, too bad I haven't got to watch much of it, or even listen much for that matter.  I was able to listen a bit to the Royals AA (Northwest Arkansas Naturals), and AAA (Omaha Storm Chasers) first games last night.  My plan this year is to listen to at least one or two minor league games a week since Tune In has a lot of them available and I can find others throughout the internet.  One game I was excited to listen to last night turned to sadness a bit before the game started.  As I've wrote before, Chuckie Jones is a local guy.  I had planned to listen to him and the San Jose Giants play last night.  Before the game started I was on milb.com and an article caught my eye.  "Giants OF Jones suspended 50 games".  OH NO!  Turns out is was a drug violation according to reports (I can't come to terms actually admitting its true, if it is), but not a PED, more like hard drugs.  So I won't be catching them for a couple months.  I hope for the best for him and hope he can bounce back.

So tonight I hope to listen to the Royals game, and would like to catch a west coast minor league game.  I'll figure it out later.  Soon I'll also be listening to the Joplin Blasters, a new Frontier (independent) League team.  I'd like to make a summer trip catching a game, going to Springfield and see the Cardinals (STL's AA team), going to Springdale, AR, and catch a Naturals game, and maybe swing up to KCK and see a Kansas City T-Bones game.  I doubt I go to any, but it would be nice.  It does look like I'll be catching a Royals game next month, so at the least I can go to that. 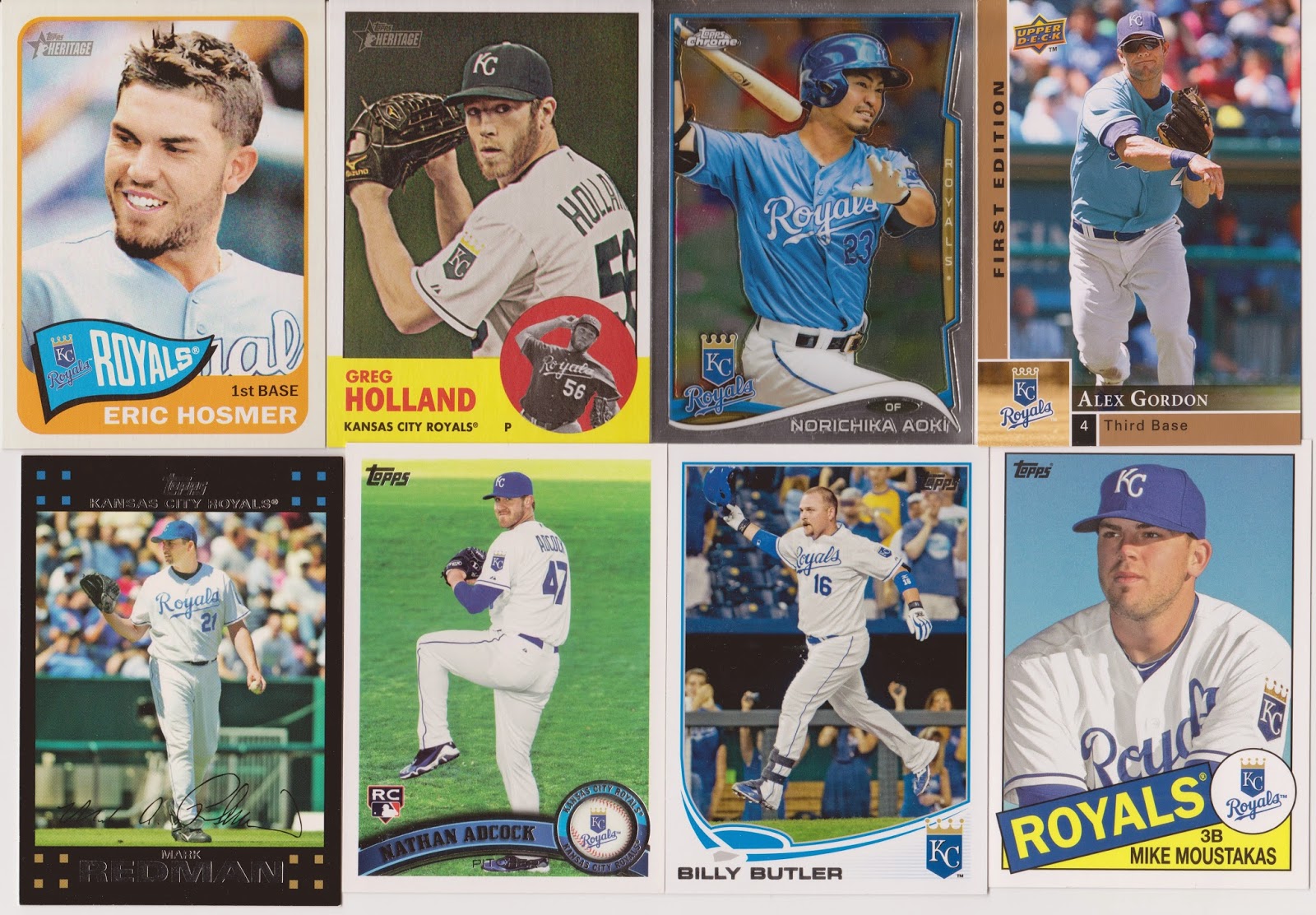 I scanned these cards in February and I can't remember if I showed them.  I believe I got these on Listia, but I could be wrong.  My favorite card in the bunch is the Moustakas card, followed closely by the Nate Adcock card (just because I don't have many of him).  Also of note is an Alex Gordon card as a third basemen.  It just seems crazy to think of him of anything other than a left fielder these days.

So far in 2015, they have been doing a great job.  They have even been showing some power, which is something unheard of at Kauffman Stadium.  Though its possible this week's storms and strong winds have played a factor.

I just found out their game tonight is a late start so I guess no west coast minor league games tonight, I'll watch Shark Tank before the game starts.

I don't have any other Royals scanned, but I thought I'd clear my folders out some, so here is a few other random cards, and sorry if I already shown them, I usually try to clear them out after uploading them. 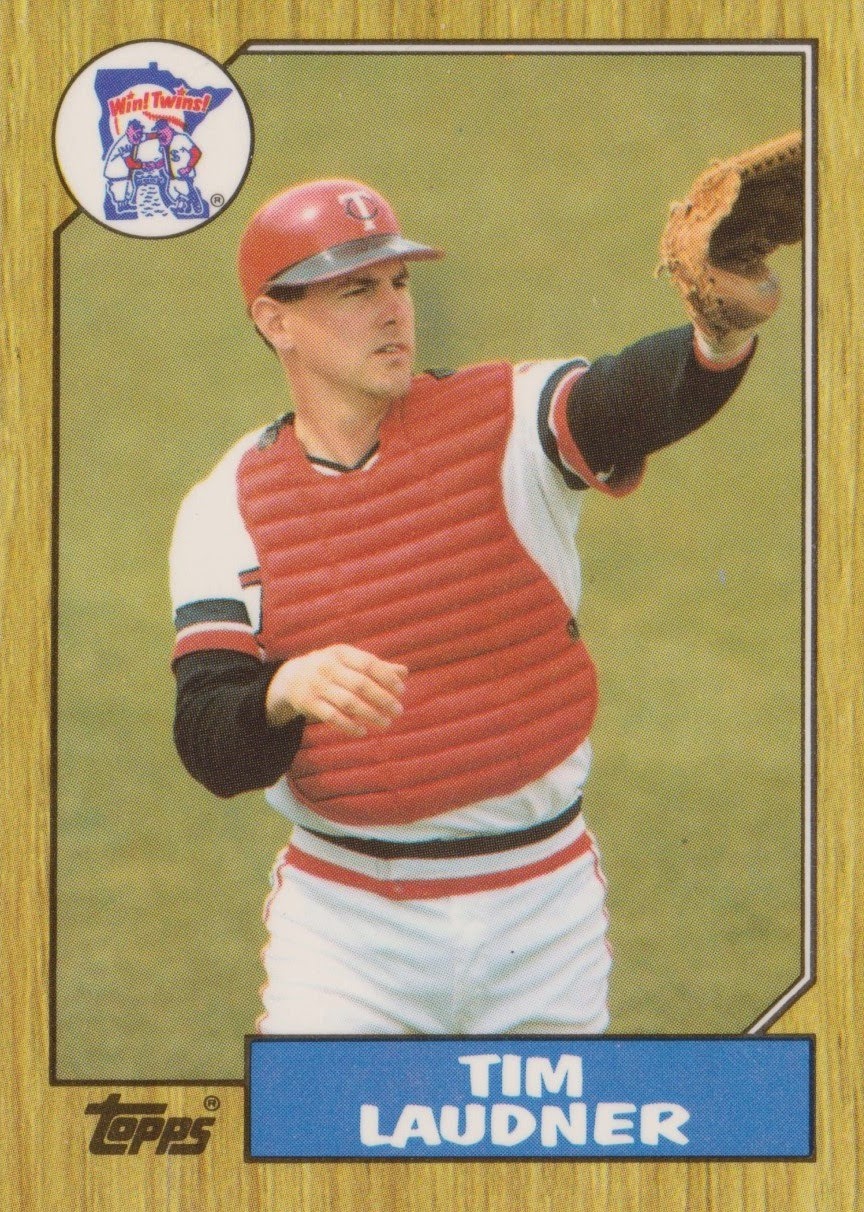 Here is a 1987 Topps card of Tim Laudner.  I have no real reason why I scanned it other than the fact that he went to Mizzou.  I never saw him play there, but thanks to Just Commons, I now have a good majority of his MLB cards. 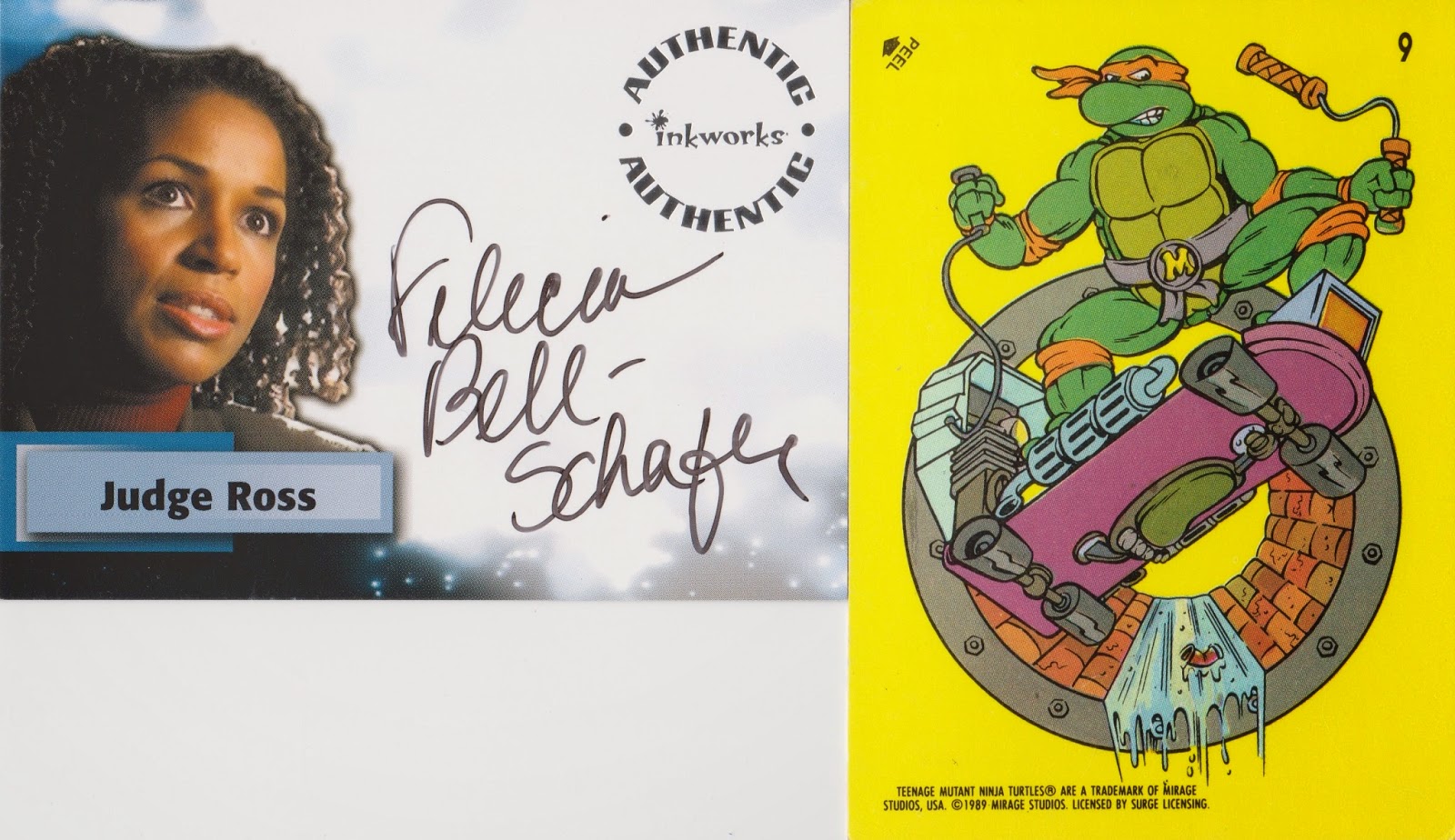 I'll start with the Turtles card.  I loved that cartoon, and I loved these cards.  I bought a box of series two cards last year, and soon I hope to do a post on what I got.  This card/sticker is from series one though.

The card on the left is from Smallville.  I have never watched the show, and I don't know if this card is highly sought after, but it is a nice one to have.  I'm not sure how I got it, unless it was in a random repack I bought a few years ago.  You might see this posted on Listia or ebay one day just to see if I can get anything for it. 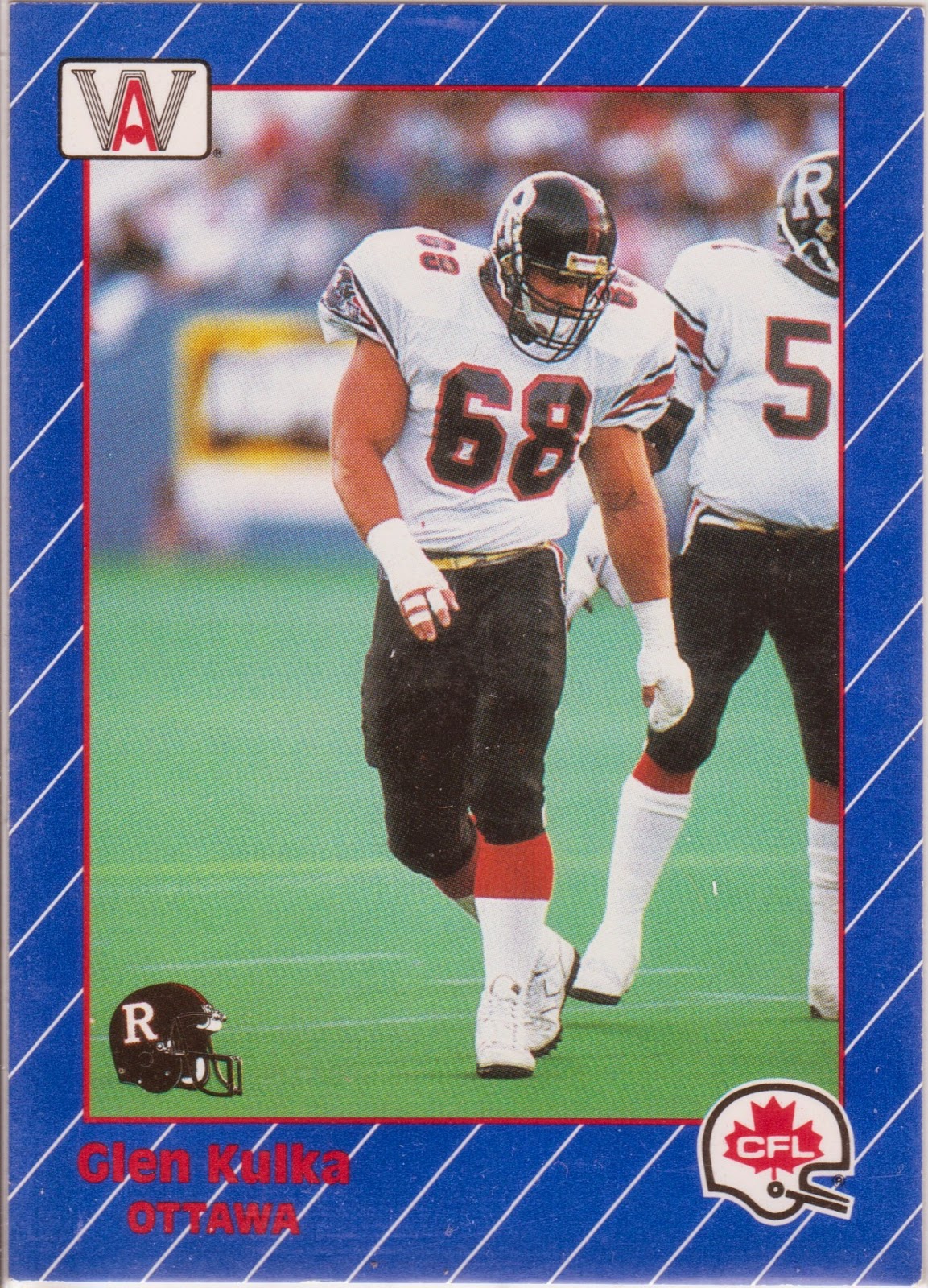 KULKAMANIA IS RUNNING WILD BROTHER!!!!  Wait, I might have a letter off somewhere.  Either way, this was a cheap Listia win (50 or less credits), so I got it.  It is my first CFL card, but I'd like to get more.  This 1991 set is cheap, but I'm going to search for the newer ones recently released.

The reason I got this specific card is semi-related to Kulka-mania.  After Glen Kulka played in the CFL, he had a change in career paths.  He became a wrestler in the WWF.  While I don't remember him wrestling, I still thought it was cool and cheap enough to get. 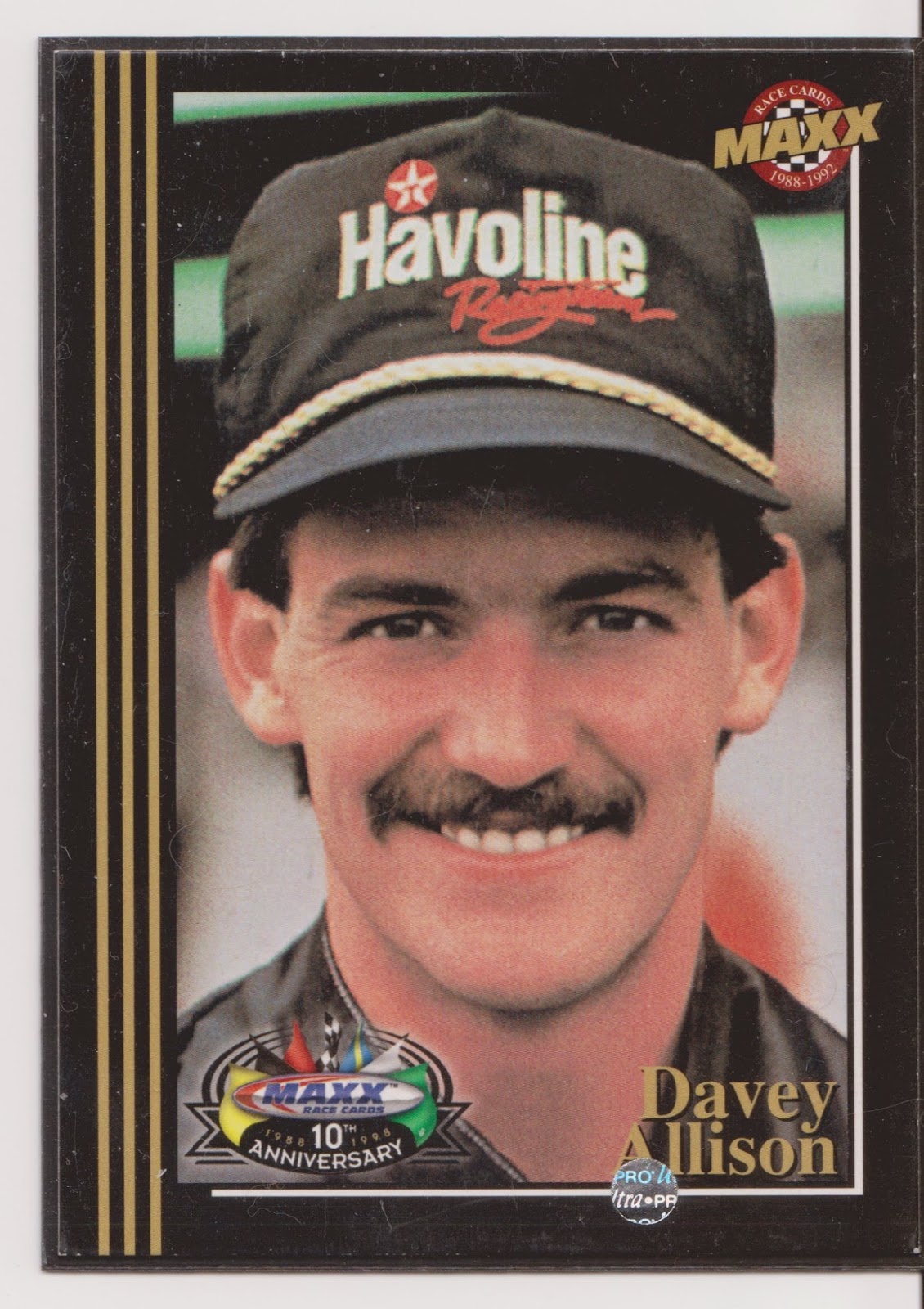 I have been a NASCAR fan since the early 90's.  It might have been because my dad, uncles, and I would watch every week on TV, but it just seemed fun to watch.  Everyone had their favorites, and when I first started watching I became a fan of Alan Kulwicki.  On April 1st, 1993, Alan died in a plane crash.  After that, I started rooting for Davey Allison.  I had always liked him, but now he became my favorite. Three months later, on July 13th, 1993, Davey died in a helicopter crash.  After that I rooted for whoever drove the #28 car.  A year later, Ernie Irvan who was driving the #28 car, crashed in a practice at Michigan Speedway.  After that, I kinda stopped rooting for a specific driver.  Even today, while I root for Michael Annett, I change week to week who I want to win (I've accepted Annett won't be in contention 95% of the time).

I got this card off Listia pretty cheap recently, and have been working on a small collection. Sometimes I wonder how different NASCAR would be if drivers like Kulwicki, Davey, and Tim Richmond were racing into the late 90's.  It could have been more interesting and possibly stalled the progress and rise of Jeff Gordon (for better or worse). 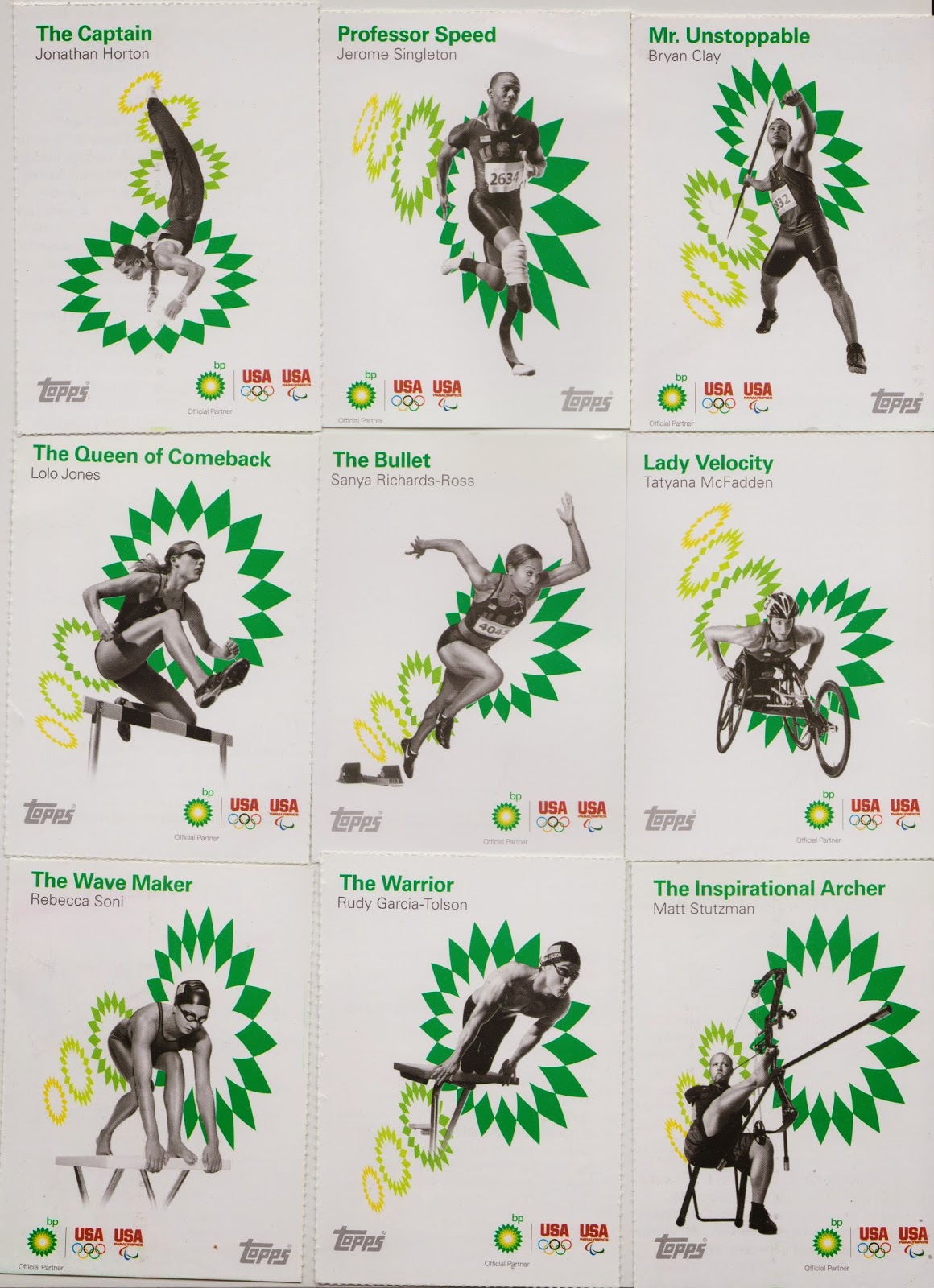 Um, I forgot where I got these.  To be quite honest, its possible these came inside an issue of Bloomberg Businessweek.  Since I forgot, I need to look it up.  I planned on adding them to the Trading Card Database.  These aren't ones I would actively seek, but they do have sort of a cool feel to them.  I might do a blog on it once I get more information on them.

Well, that should clear up some of my folder, I still have plenty to show.  I didn't want this to be a massively long post or to completely clear out the folder in case I have a sort of Writer's Block and nothing to talk about.

Thank you for reading and have a great night.