Yesterday I showed off my box of 2015 Opening Day cards.  I bought it a few weeks back.  Yesterday I bought another box, and I thought I'd show them off today. 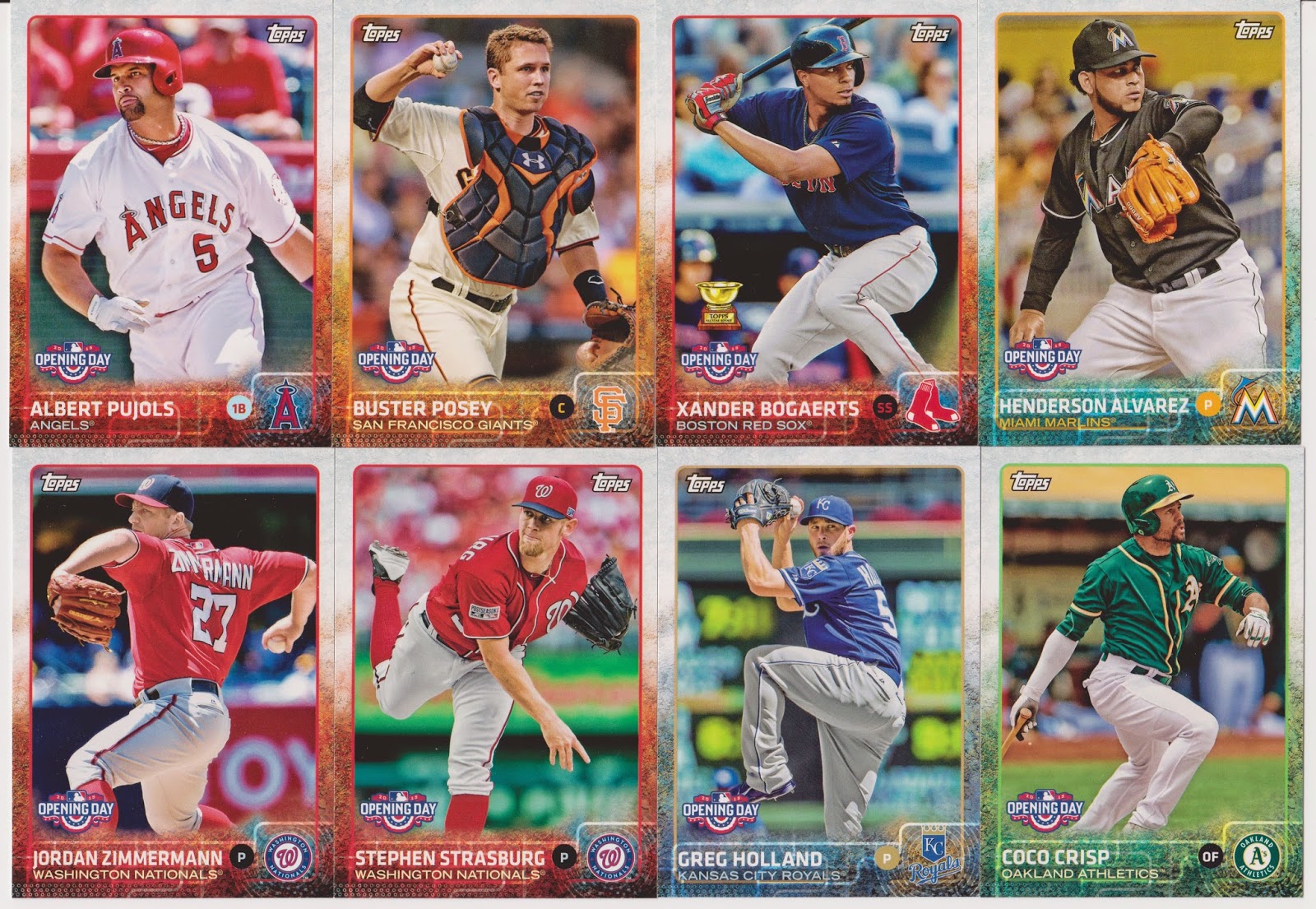 Some Nationals, Pujols, Coco Crisp, and another Holland.  There were quite a few doubles in this box, which was a bit upsetting, but still it turned out ok. 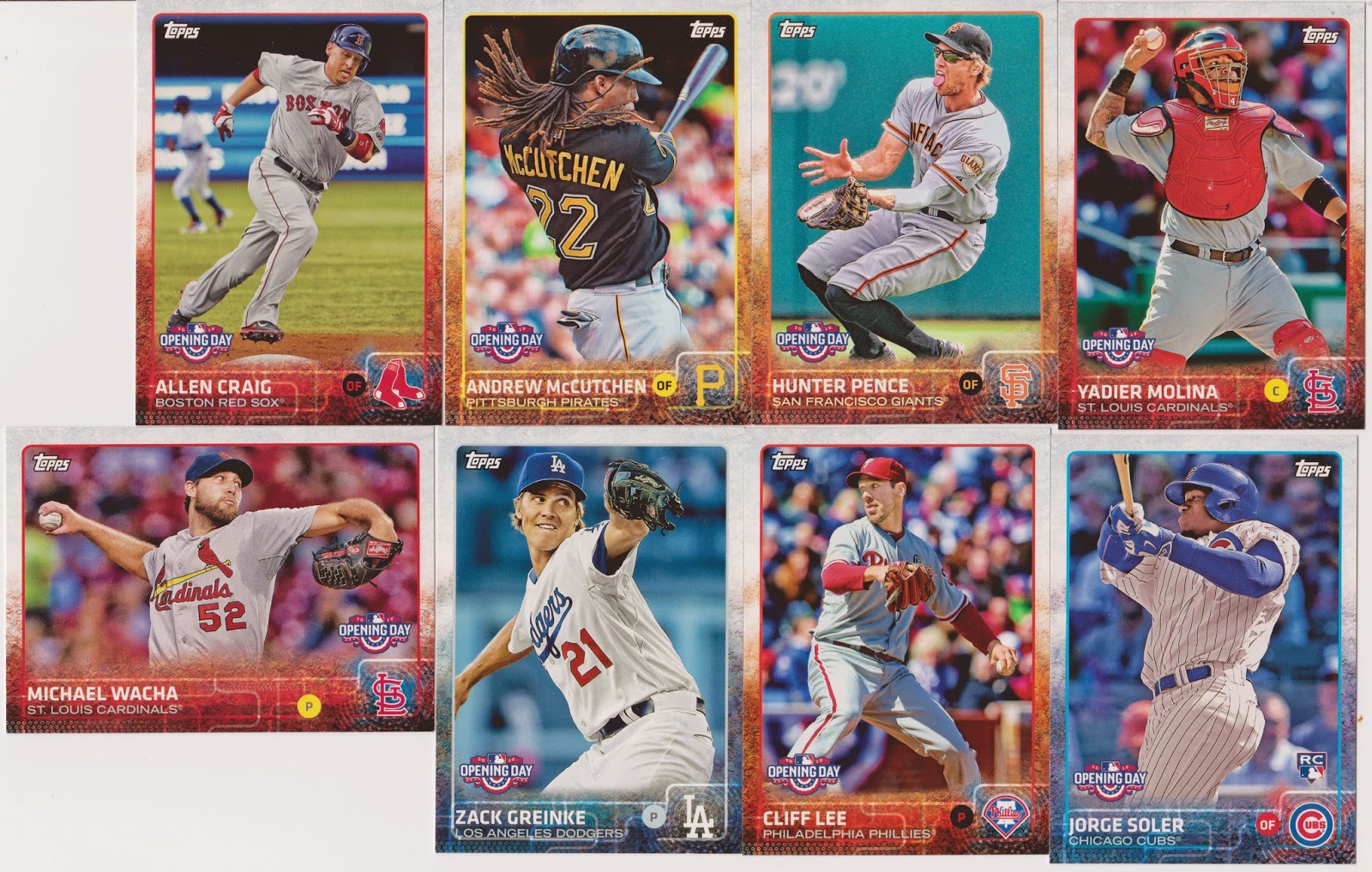 Some Cardinals, former Cardinals, a rookie, a couple NL East rivals, and a Grienke I will put into a PC if I decide to build one for him.  I did wear my Walmart knockoff Greinke Royals jersey yesterday.  I really need to get a better jersey or at the least one of a current player on the team.

After two boxes, I have 49% of the set compete, and I'm sure if I really tried I could finish it rather quickly.  IF I TRIED.

Did I mention I got a lot of doubles? 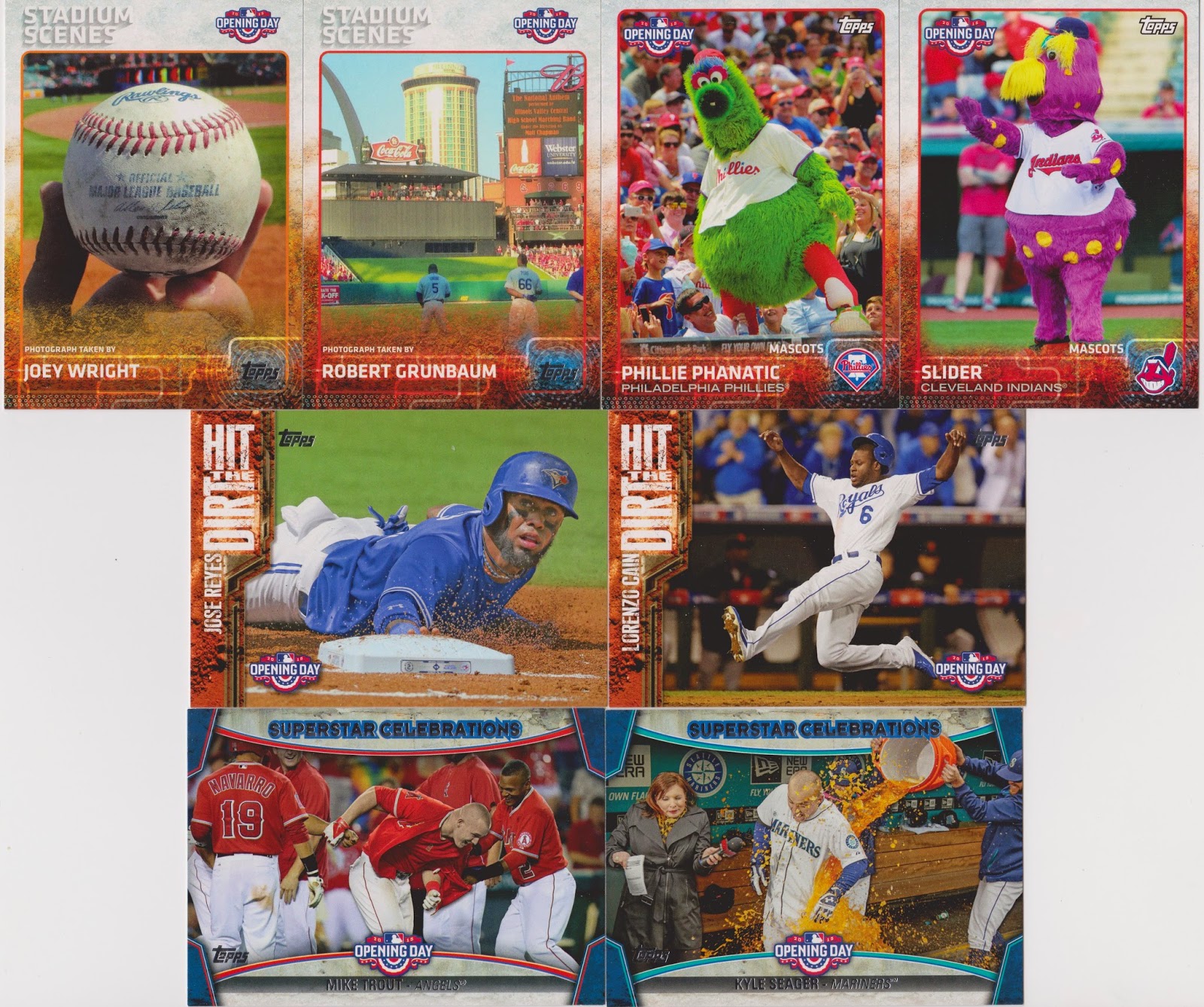 The top four are doubles.  I wouldn't include them but I wanted to show all the inserts.  The Cain is also a double, but I like it, so its okay.  I will say this box had a good amount of inserts.  Over 1 per pack average is nothing to complain about. 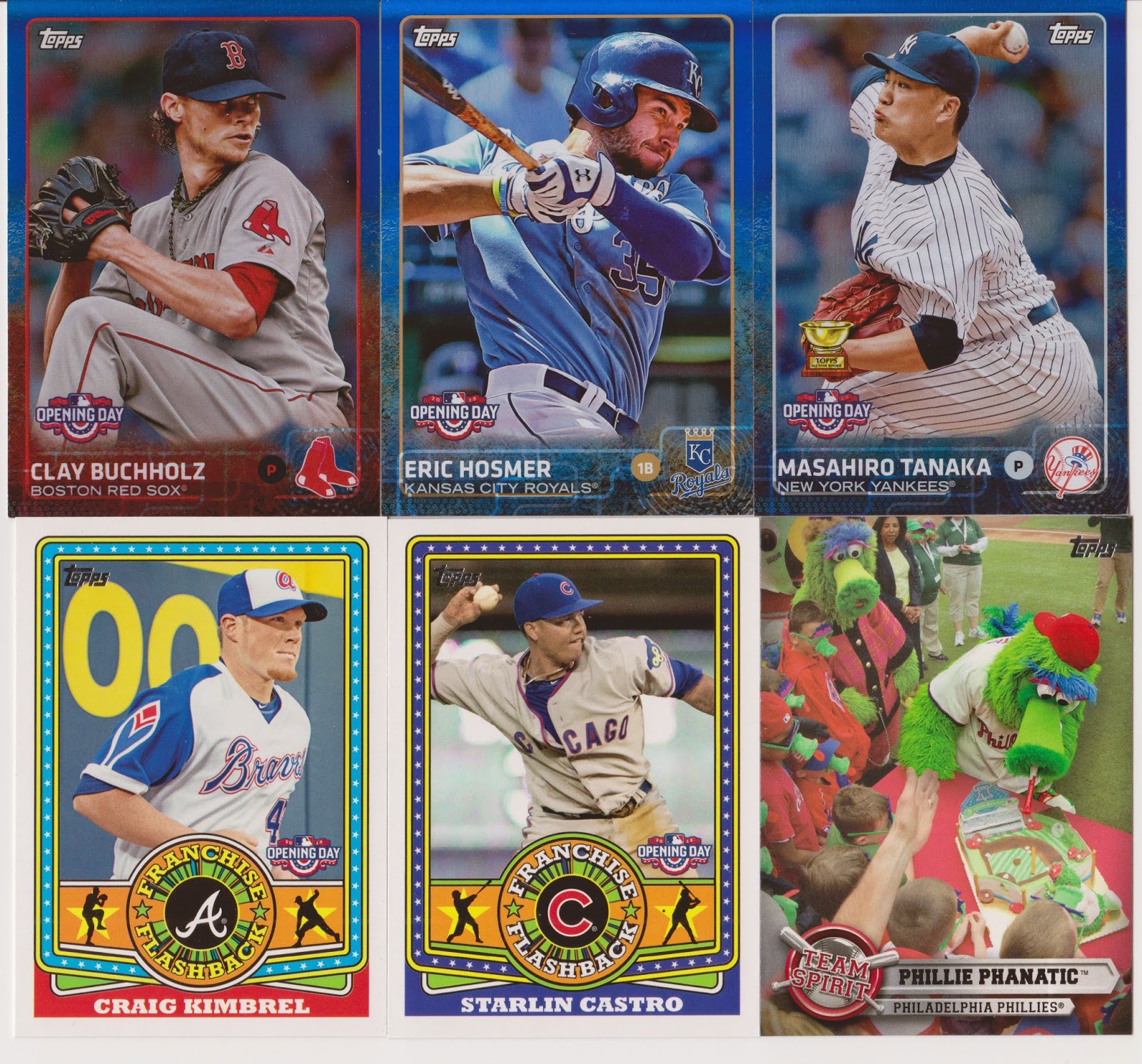 Some more blue parallels.  I was happy to get the Hosmer, and the Bucholz and Tanaka ones aren't bad either.  This box is starting to come around.

I can't get over how much I love these Franchise Flashback cards.  NOW WITH 100% LESS BREWERS!  Seems like I got a lot of National League cards.  I like the throwback jersey of the Braves.  They seems to get new stadiums more than they do new jerseys.

A second helping of the Phillie Phanatic.  Other Team Spirit cards featured players, but I guess when your team is not doing as well, the Phanatic is the only one with spirit.  I went from 0 Phillie Phanatic cards to 2 within a month, not bad.

So overall, I think this was a pretty decent box.  It had an abundance of inser..... wait a minute, I forgot to show the first pack I opened. 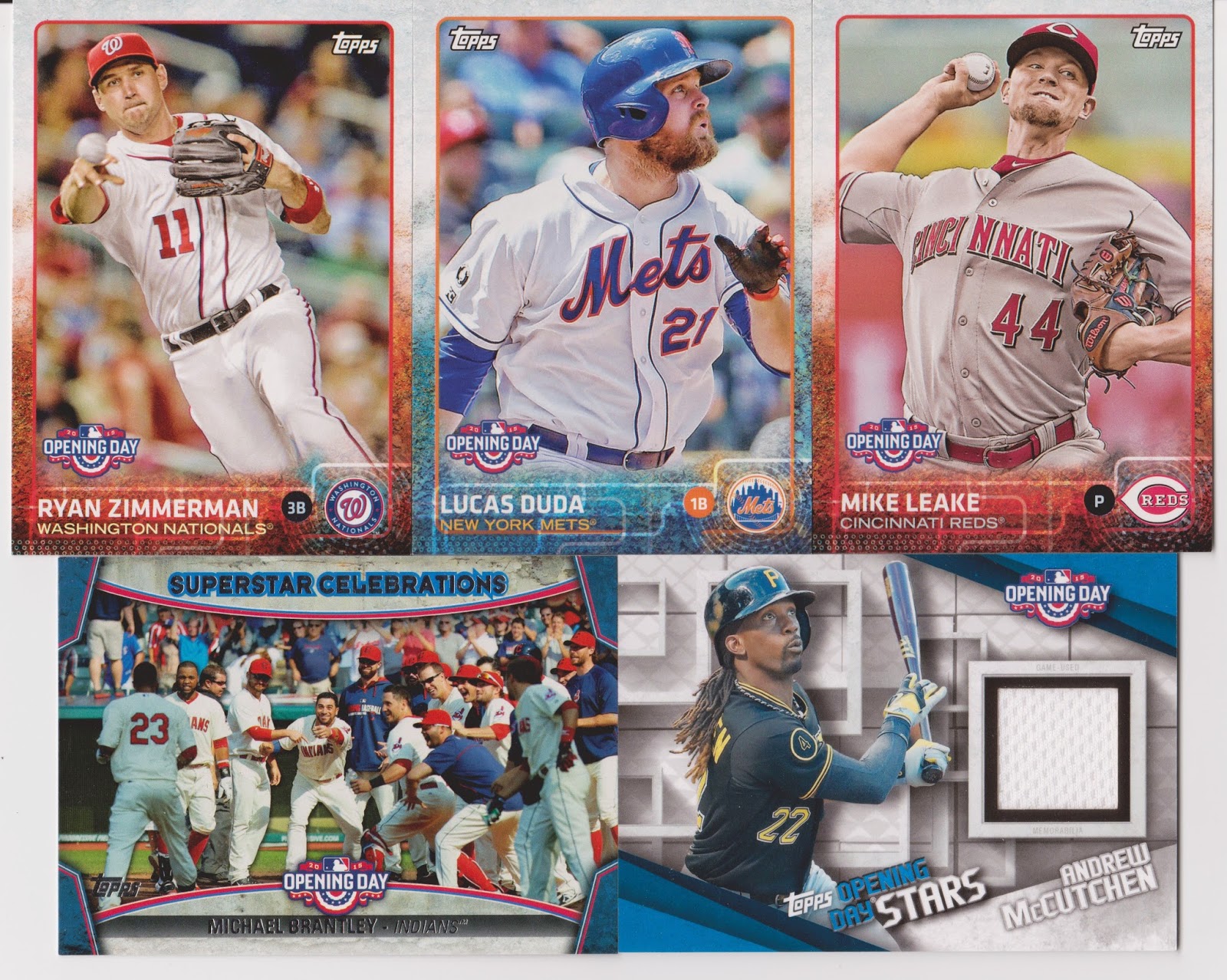 Then there is an Opening Day Stars relic card of Andrew McCutchen.  It was actually the second card I pulled behind the Zimmerman card.  For the most part it didn't matter what I pulled after this card, this box was worth it.  The relic is one of the nicer fabric pieces I've pulled, and is right up there with the Carlos Beltran bat relic I pulled a few years back.  Overall the design is really nice, aside from Opening Day logo, this could be a nice card in the regular set.

After this box I want to finish the set, but I don't want to get aggressive buying boxes to complete the set.  If I find a pack here or there, or find some cheap ones on Just Commons, I might get them, but otherwise I think I'll hold off for a while. 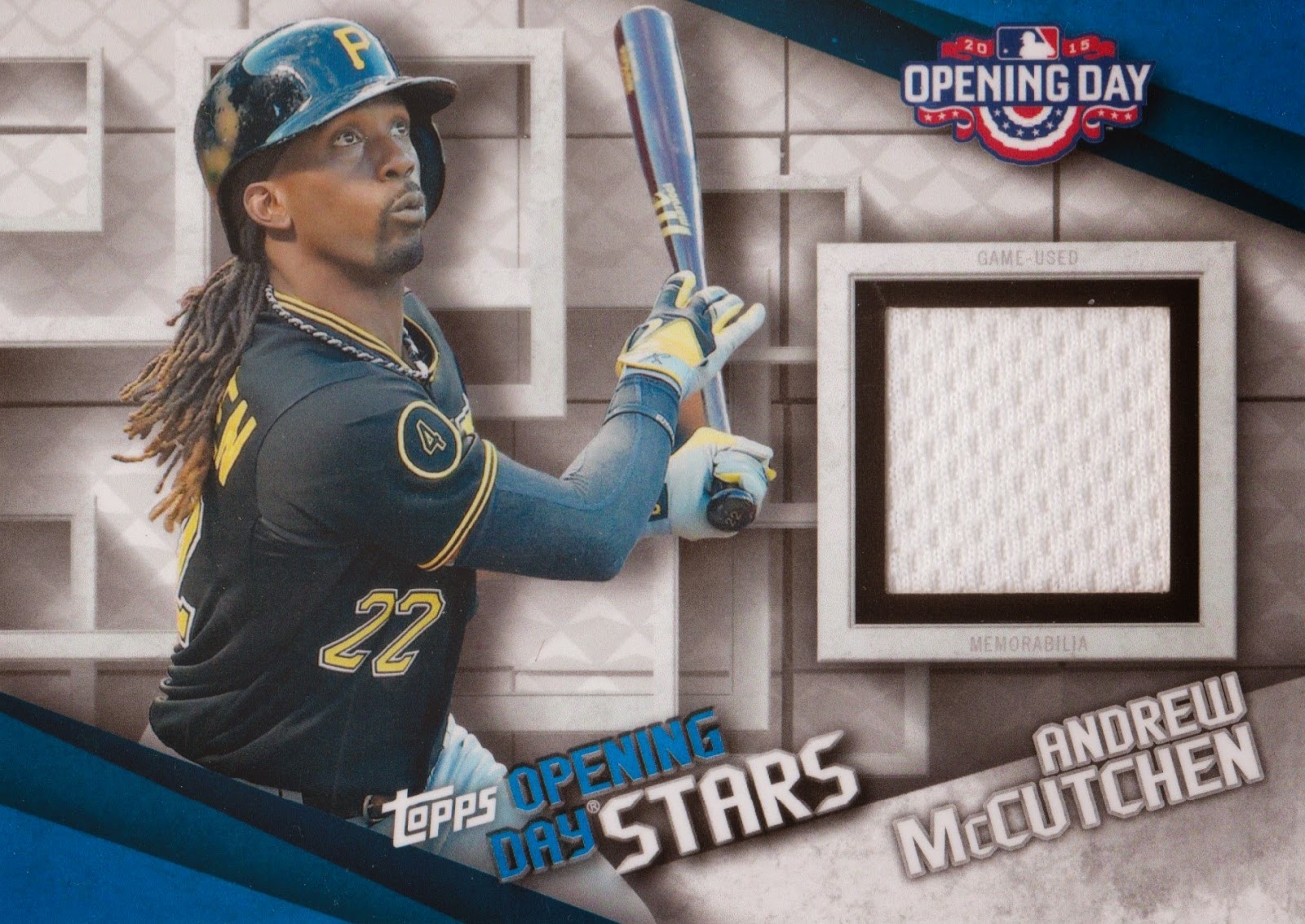 One more shot of the great pull.  How about the back? 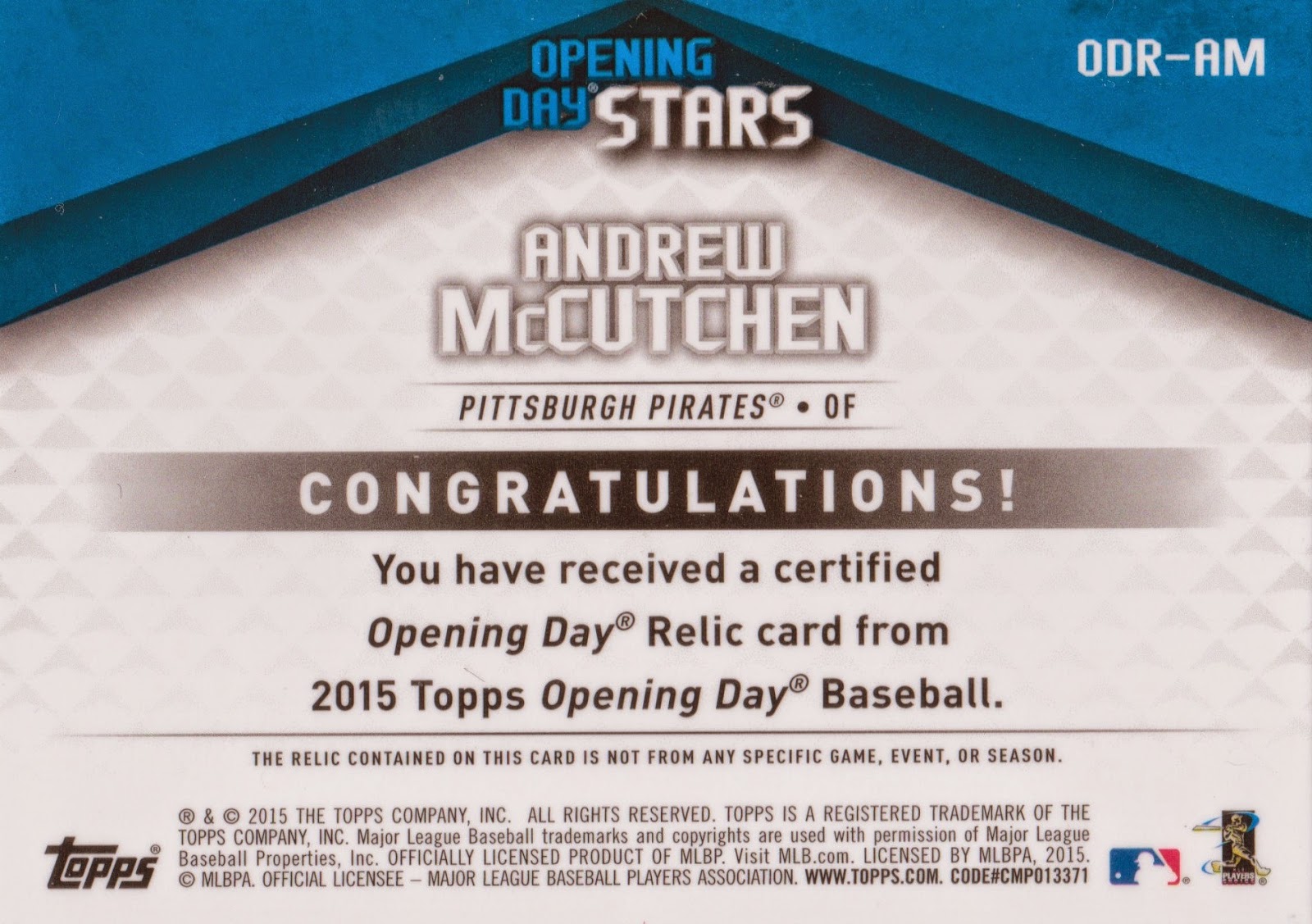 Thanks for reading, I have a couple more 2015 products to show later this week and a couple random random packs as well. Plus I just got a few Listia auctions just received, so this could be a busy week.  Have a great night.