Yesterday was a busy day for me as I hung out with some friends and went to the annual Mizzou Black & Gold Spring Game.  For the price of a can of food donated to the Mid-Missouri Food Bank, you got to see the Missouri Tigers play.  To be honest, the game itself was a bit lackluster, with not too much excitement, but the atmosphere is really what keeps me going back each year.  I think I've only maybe missed one game since 2009, and each year never disappoints in terms of fun factor.  I posted almost all my pictures on Facebook, but I'm sure not all of you follow me, so I thought I would post a select few here to show how the day went. 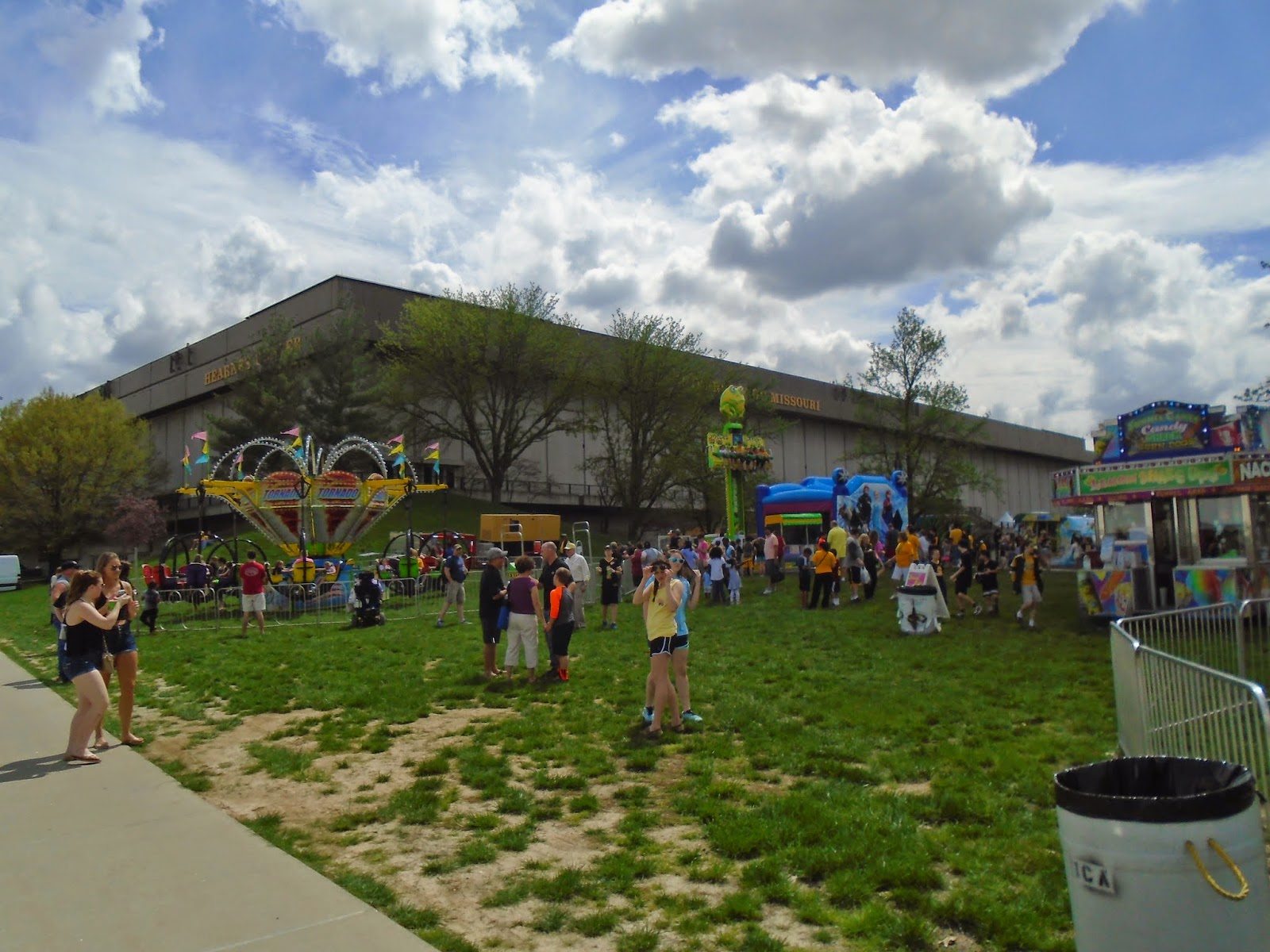 Mizzou went all out this year.  Almost to a point where it could be excessive.  However it was a good atmosphere in an attempt to draw out the fans.  That might have working if it wasn't an overcast day with a strong chance of rain around kickoff.  In any event, they had carnival rides, bounce houses, and of course, carnival food like funnel cakes, cotton candy, and popcorn.  There were also some food trucks lined up as well. 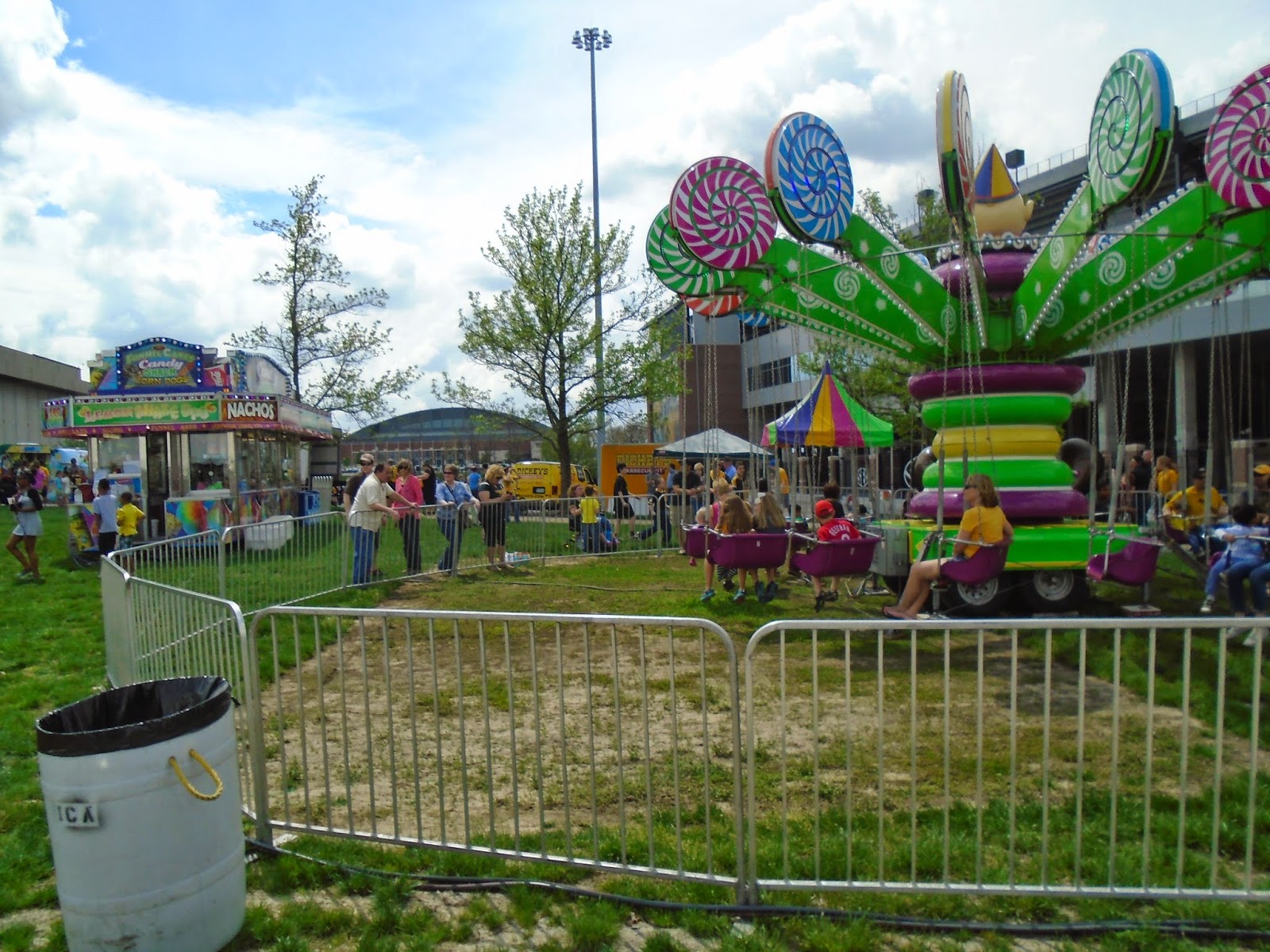 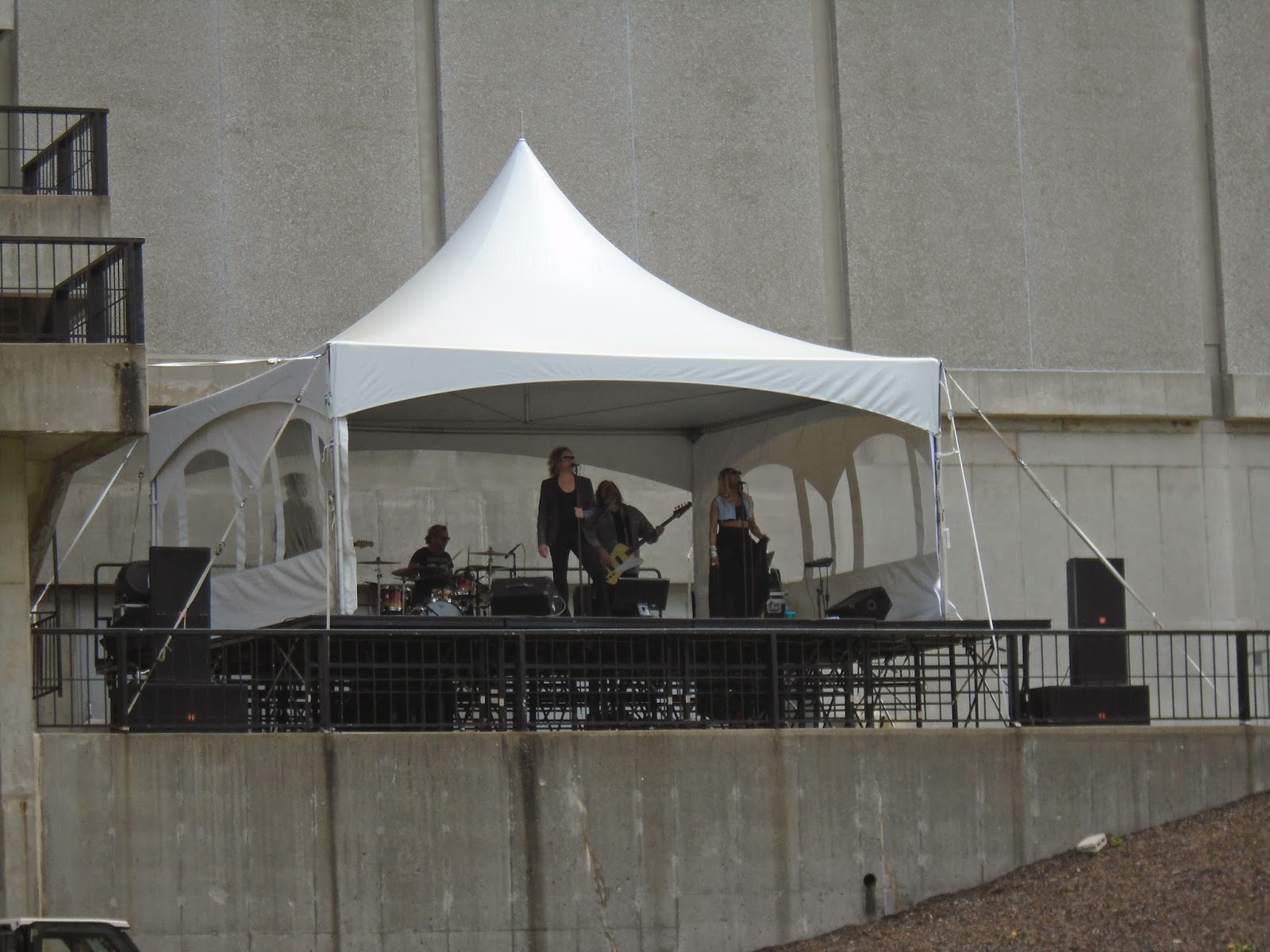 They even had a live band play.  Dr. Zhivegas played a few show before the game but were not put in a very good spot.  They usually play sell-out shows around here, or at the least are very hyped. I mention this because if they were in a better spot, or even publicized it a bit more, they would have had a better turnout.

So how was the turnout? 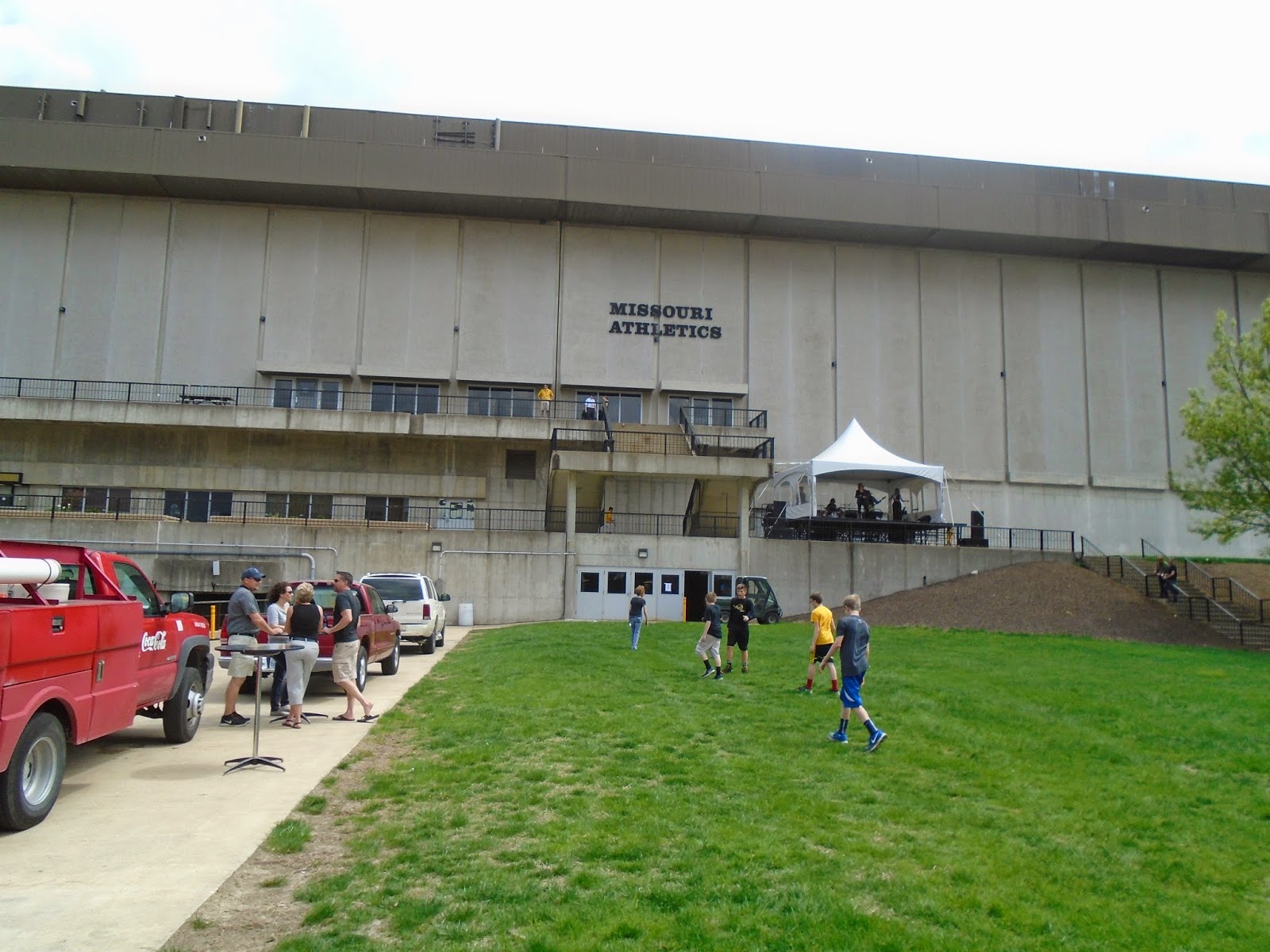 Again, bad spot, and chance of rain likely did them in.  I've never had a desire to see them, but stuck around long enough to say I've seen and heard them.

A local cluster of radio stations usually have a tailgate before the game, and they did again this day.  Burgers Smokehouse and Lutz's provide the food, and it was great.  We had a nice big piece of ribs, some potato chips, coleslaw, and a free drink, in my case a Sprite.  While it was really good, I'm more of a burger and hot dog guy, and felt it was a tad messy.  But again, it was pretty good and I won't complain for free. 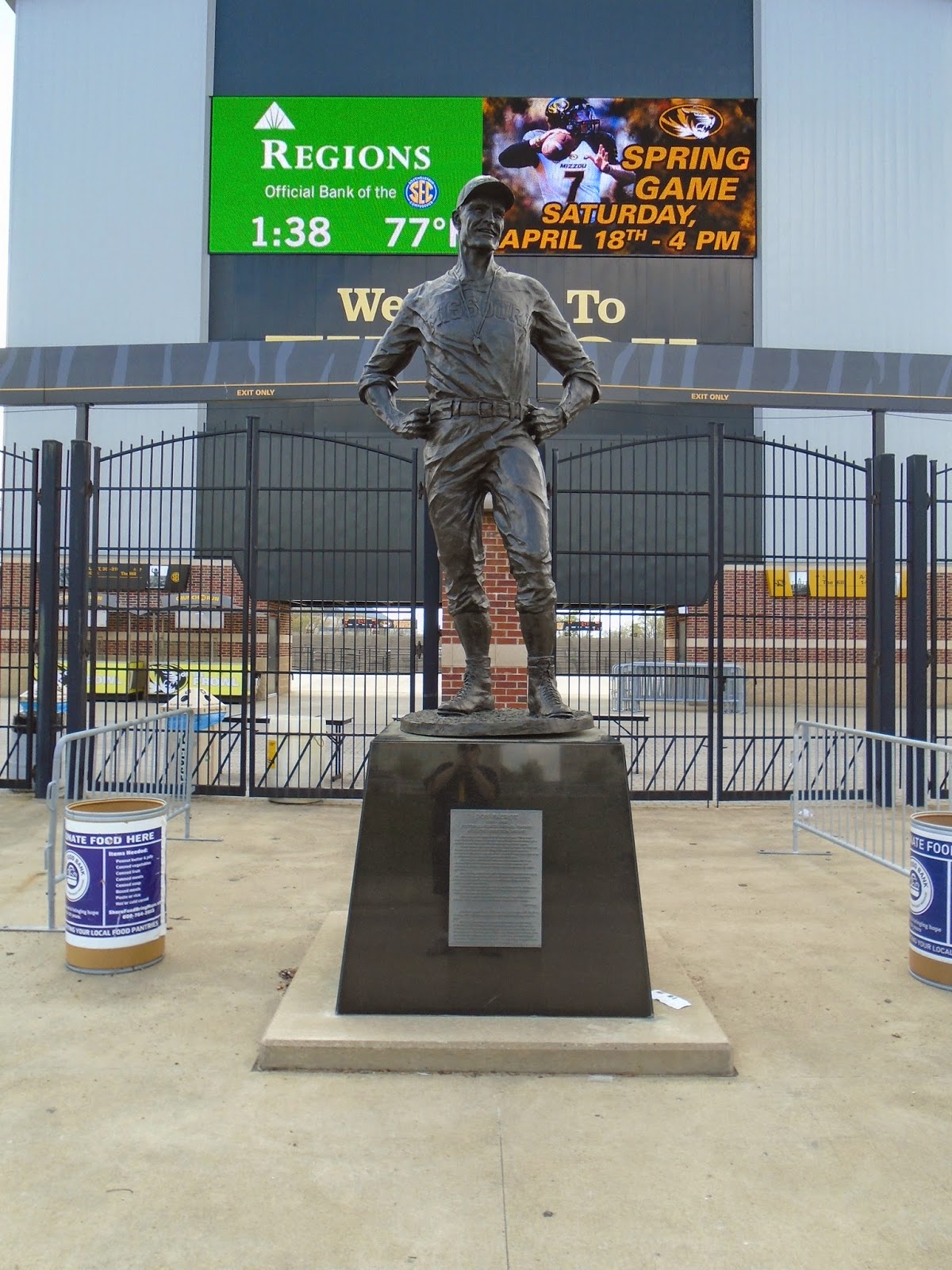 I've been to many games at Faurot Field, but have never taken a photo of the statue that sits outside the gate.  The statue is that of the namesake, former coach and athletic director Don Faurot.  Until recently he was the all-time leader in wins for the Missouri Football program.  Gary Pinkel now holds that title.  Here is a better picture of the plaque. Another event they had was the annual Tiger Team Store sale.  Last year I bought some nice never worn Nike cleats for $10 and a Mizzou jersey.  This year I walked away empty handed but thought about buying something for $5.  It was an odd sign I never saw, but I passed on it.  Anyways, no pictures to show of the sale, so lets move on. 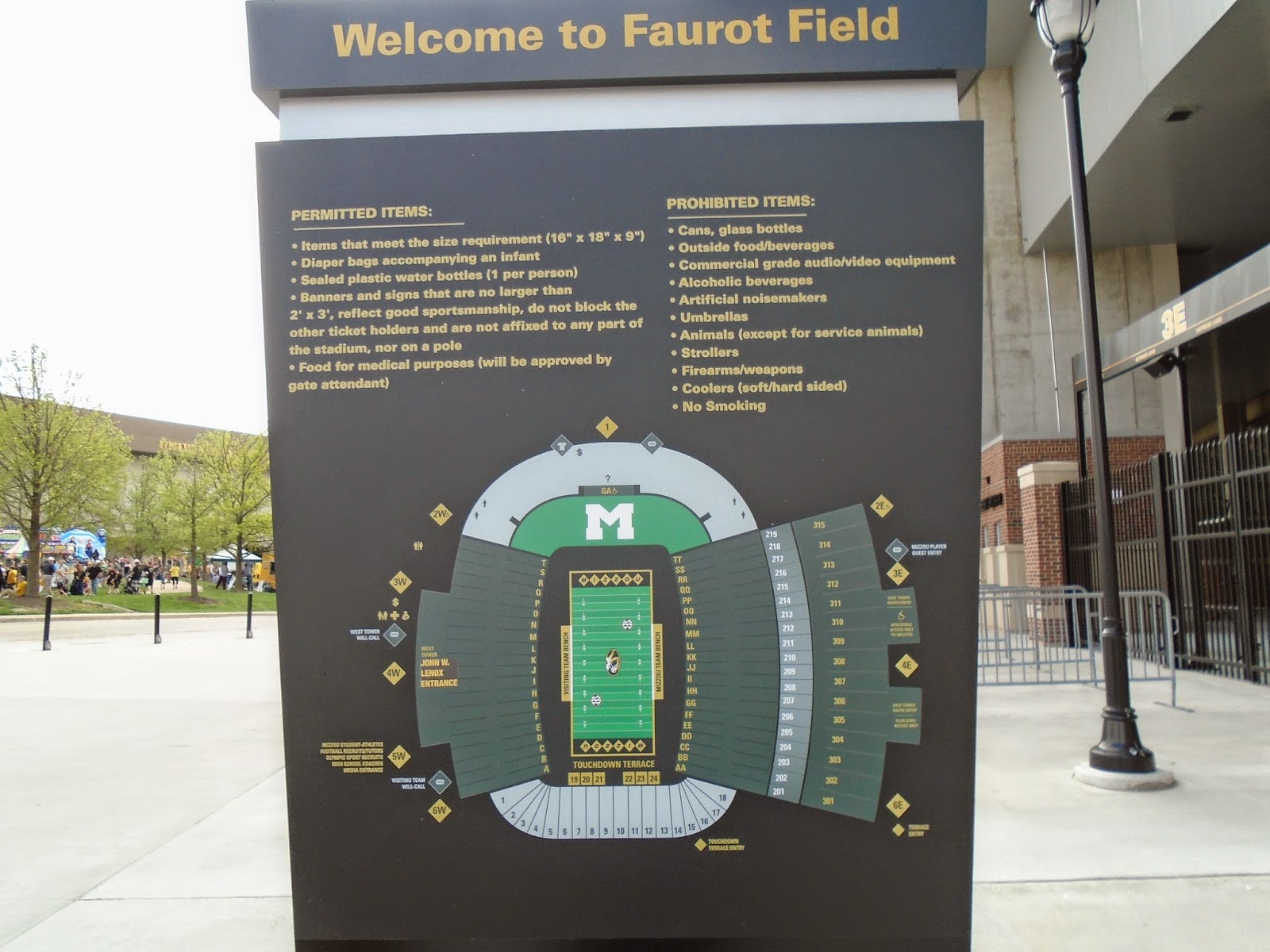 I like taking pictures of maps and signs.  Thought I'd show you what is and isn't allowed in the stadium.  On this day, umbrellas were allowed, at least we saw one.  It did rain a bit, but not enough for use to leave early.  The temperature did drop over 10 degrees before and during the game. 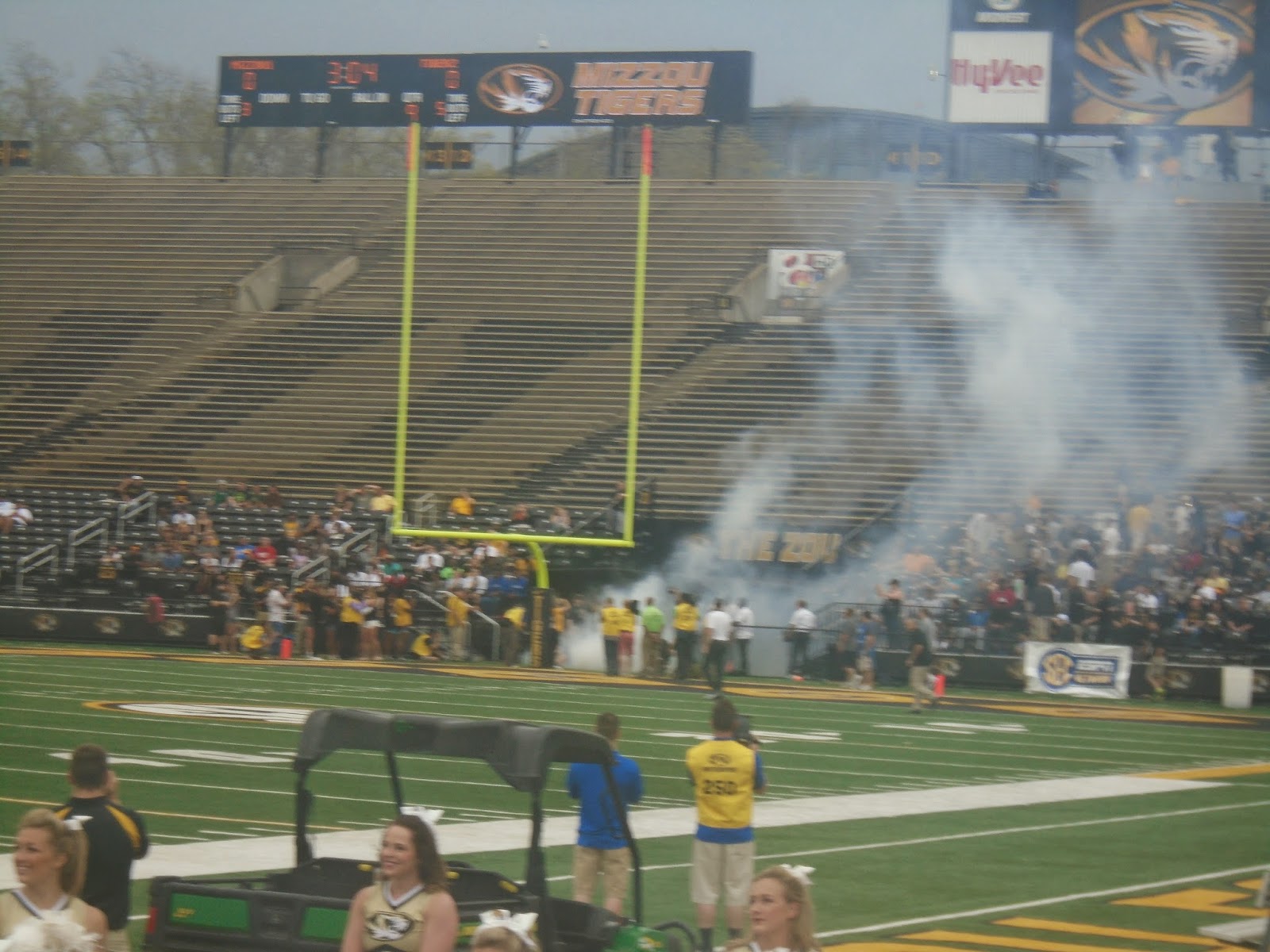 Where there's smoke, there's fire. AND MIZZOU IS ON FIRE!  Well, in this instance, the team was making it out onto the field. 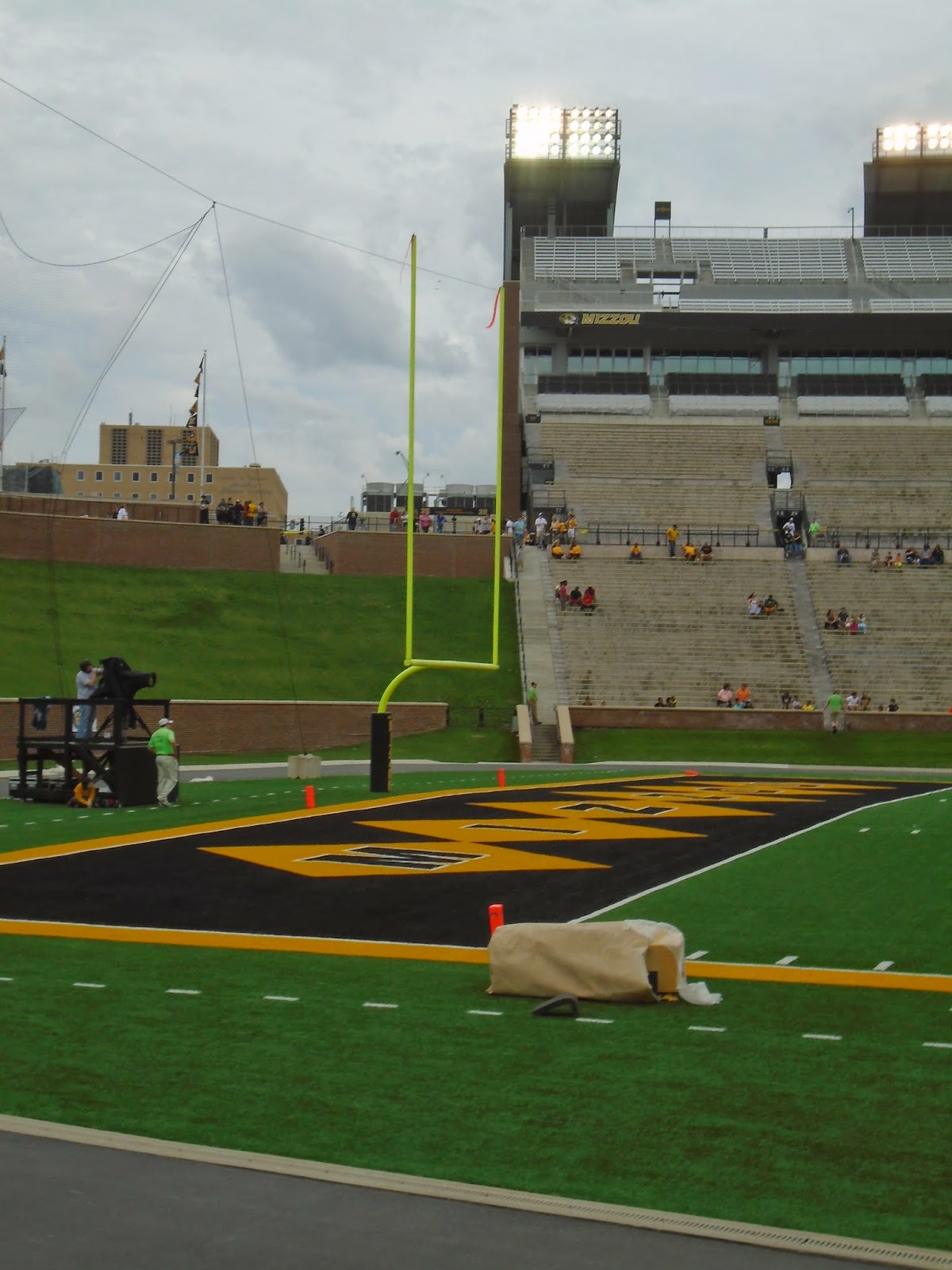 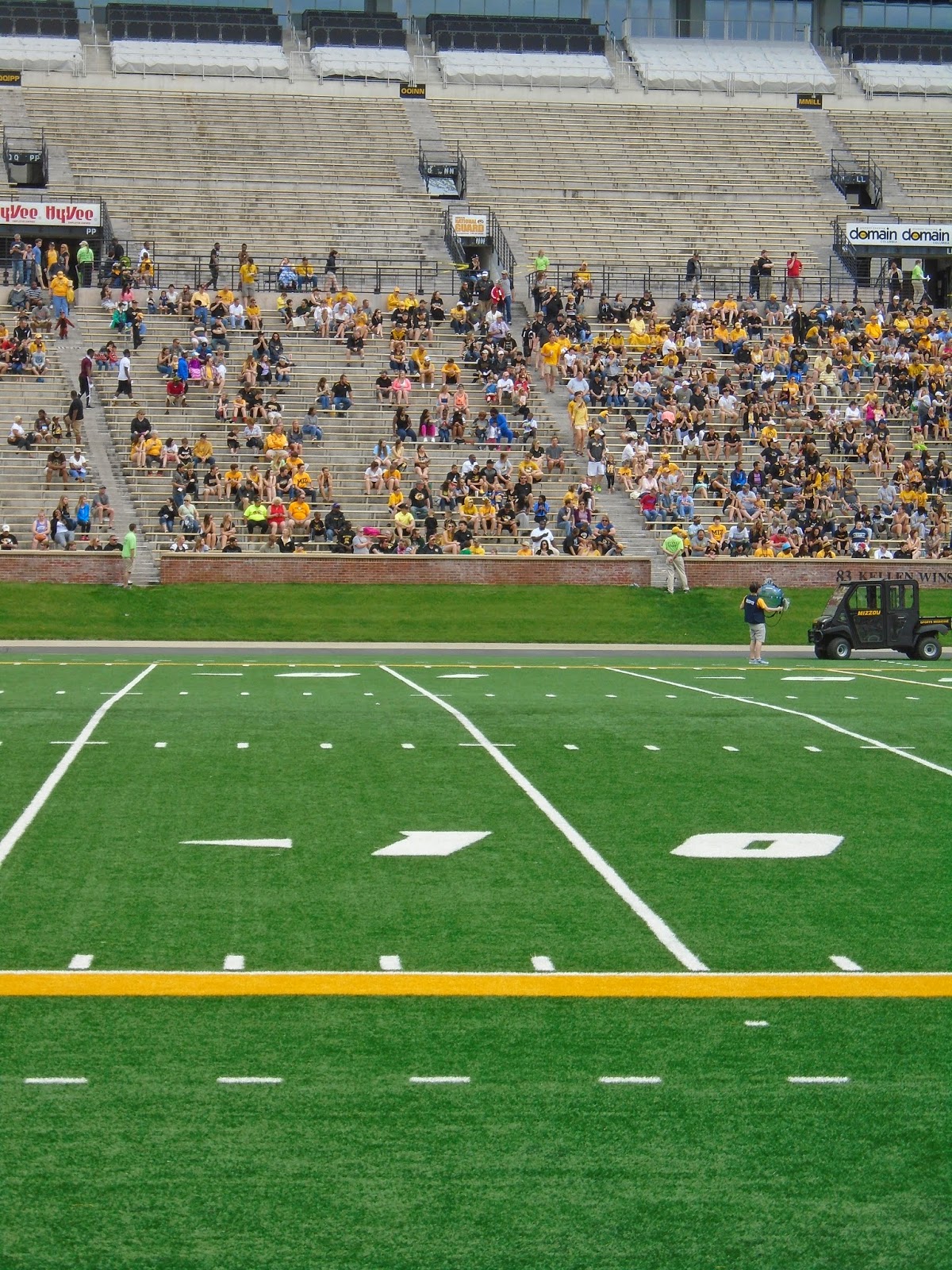 Check out that view!  10 yard line seats in the front row.  Can't complain much.  Except when a kid close to us said "aww man, Blaine Gabbert is a better quarterback than Chase Daniel".  The kids we set next to were pretty funny I thought.  They were probably middle school aged and were trying to get the cheerleaders phone numbers.  Ahh, to be a kid again.

Speaking of cheerleaders, check out this view! 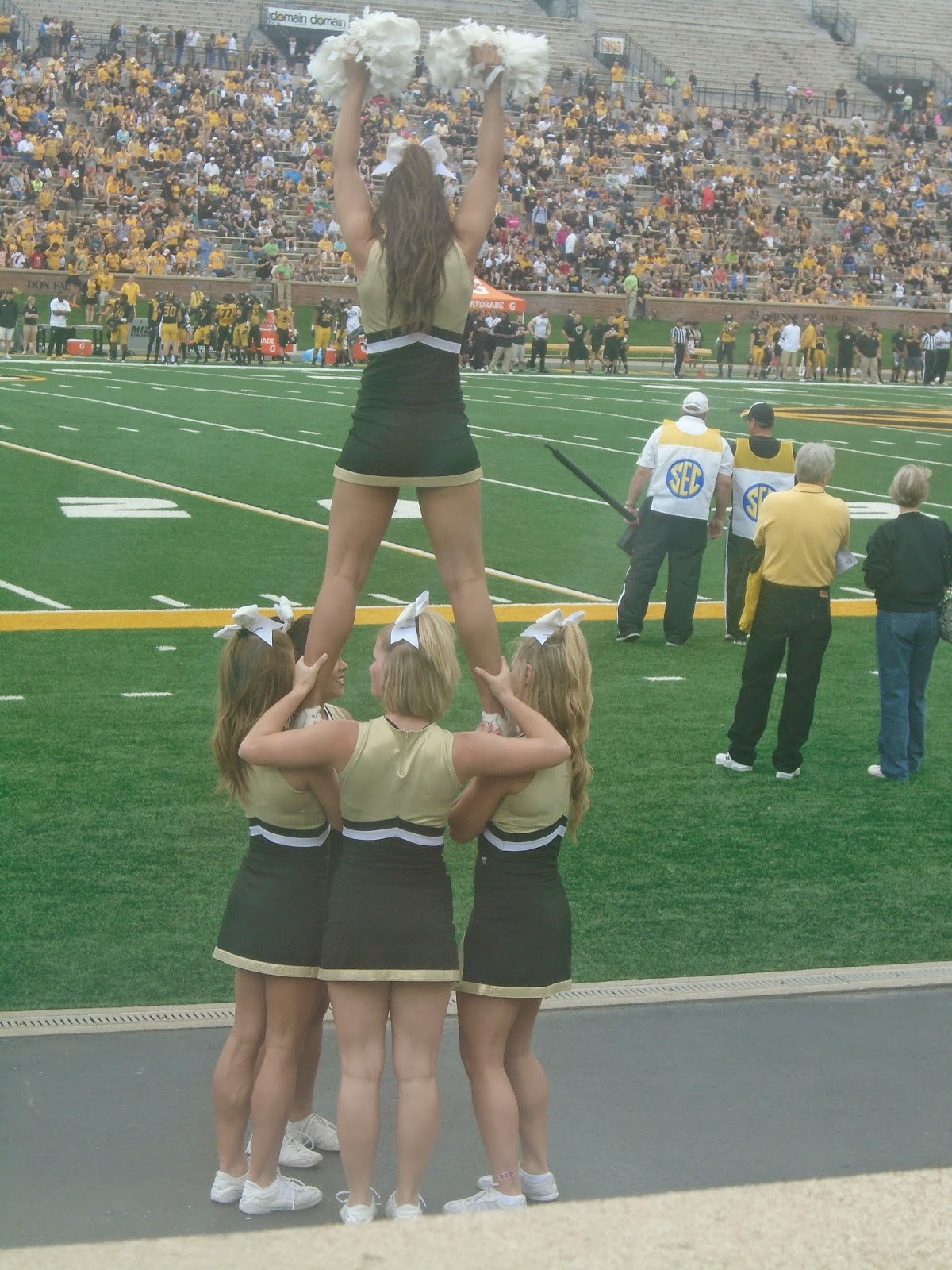 Umm... where was I?  Oh right, the game.  I don't have any good ones of the game, but here is more pictures. 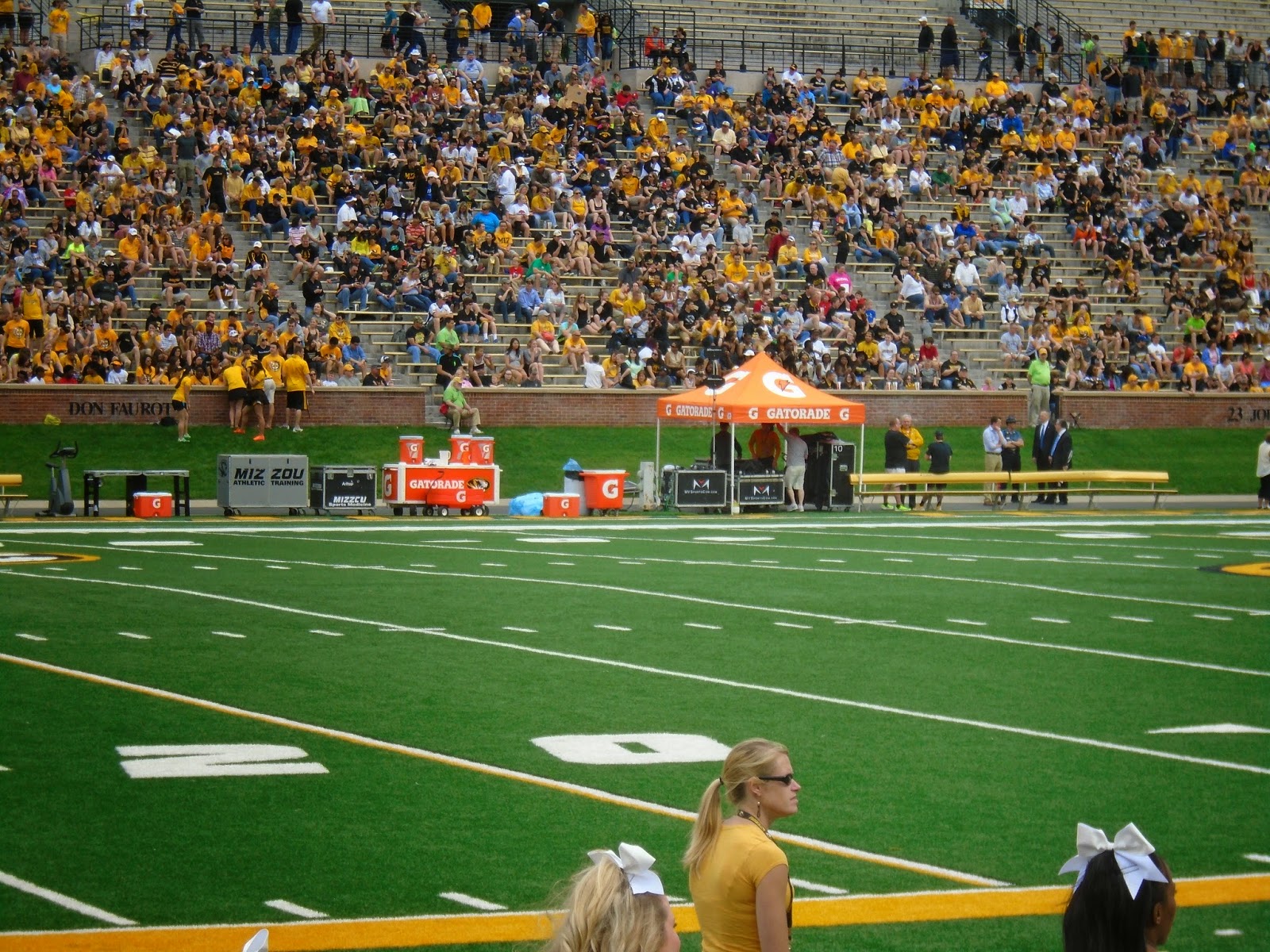 Another thing I like is product placement and such, so I take pictures of Gatorade stuff.  That's normal right? 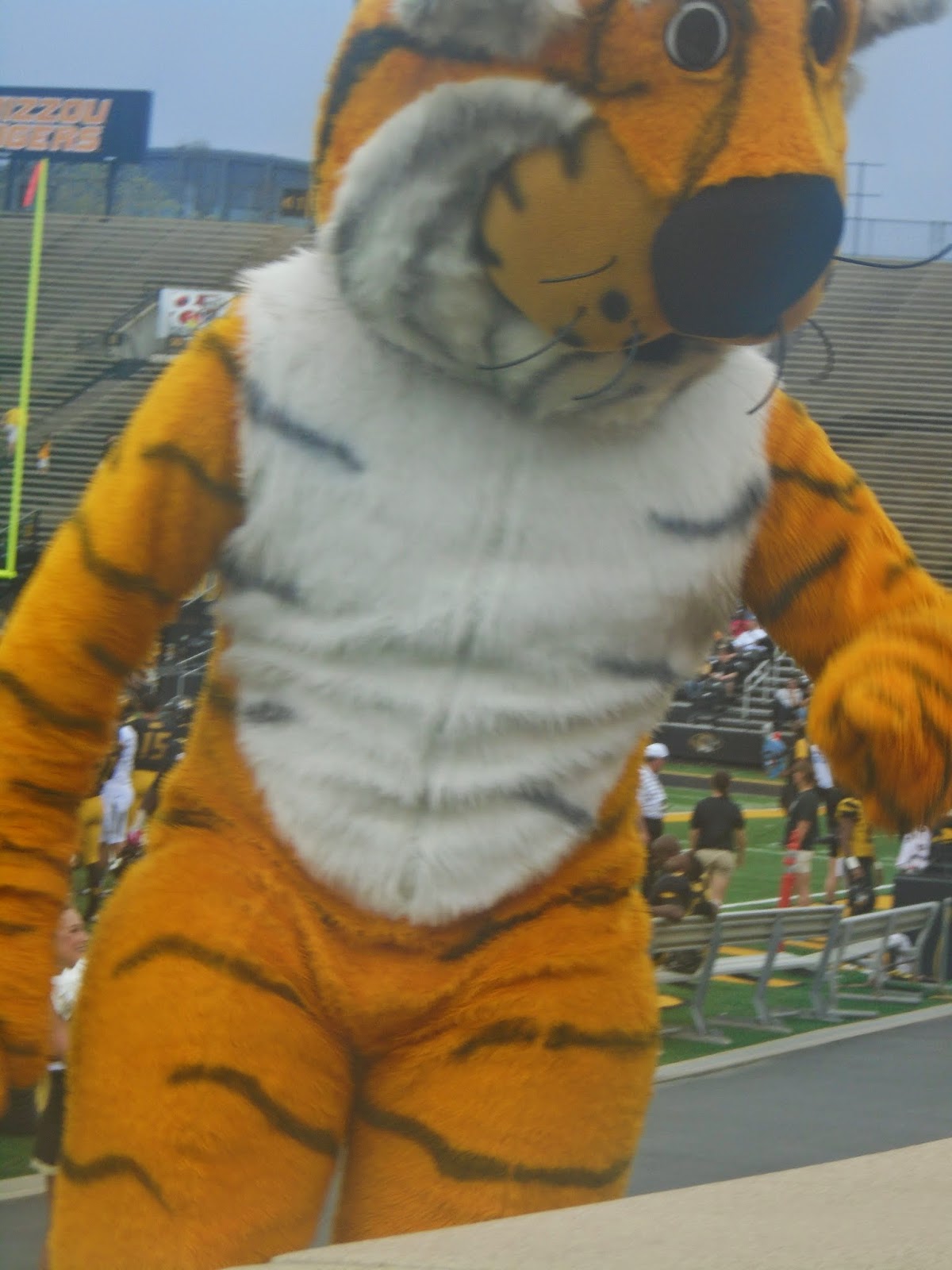 Truman the Tiger is everywhere, I think I saw him 3 times during the game.  My friends son got his picture taken with him, so that was cool.  It's about time I get another picture with Truman. 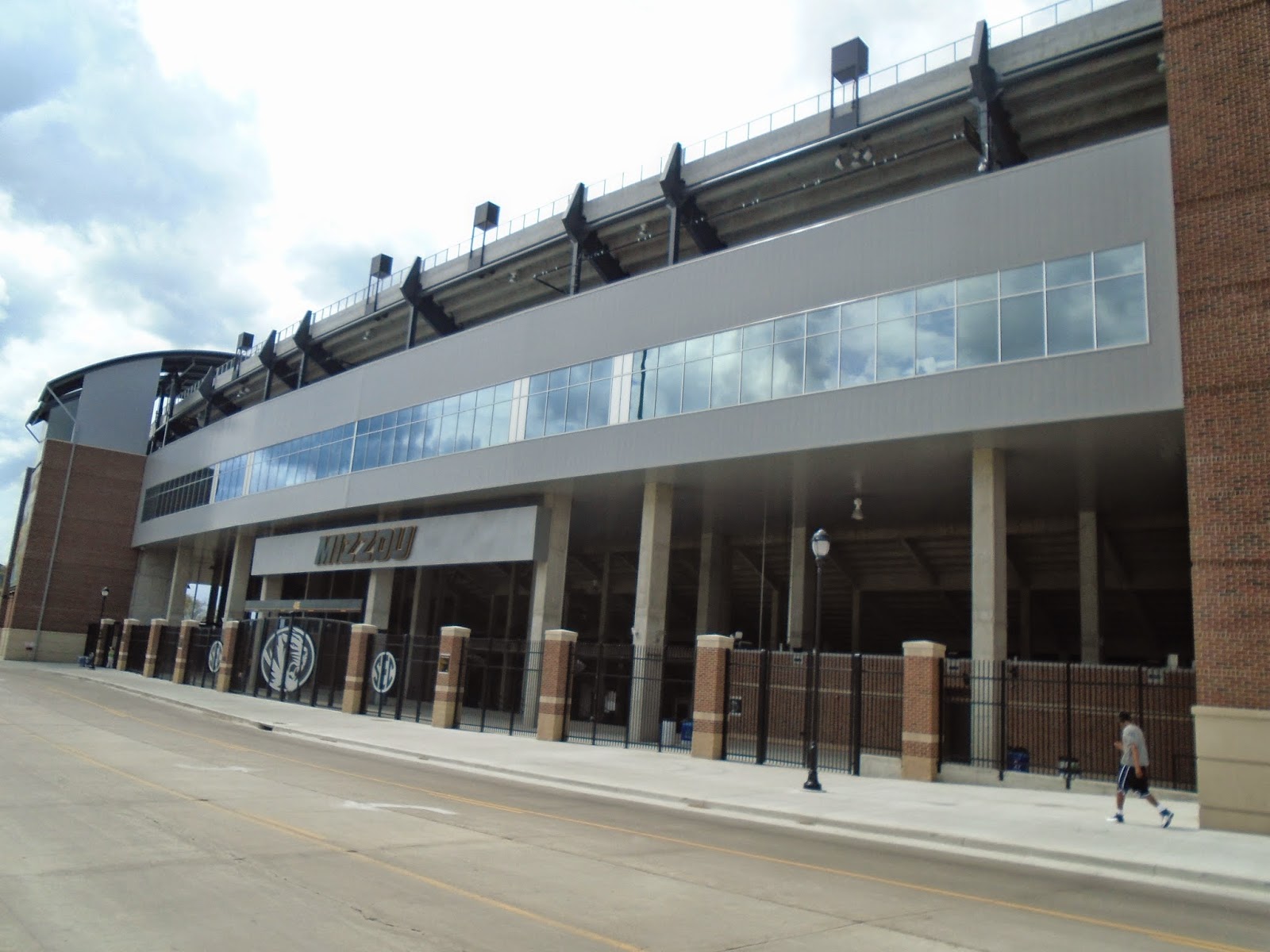 This is the side of the stadium they just completely renovated and added onto.  I really need to explore it some one day, maybe if I sell programs this year I can find a way to do that.


Well, that's enough pictures from the events.  I also got some free stuff, which I may show on a later date.  I hope you guys enjoyed the pictures, and I hope to have a few more posts this week on some cards I recently got.  I still need to scan some stuff, and a possibly busy day tomorrow may delay that another day.  At any rate I should have some more posts this week, thanks for reading and have a great night!

Email ThisBlogThis!Share to TwitterShare to FacebookShare to Pinterest
Labels: Mizzou