Going Back To My Happy Place

I had a fun weekend, I'm not going to deny it.  It was the most fun I've had in a while.  However, I'm not in a happy place.  It really all began on Opening Day.  Since Opening Day, I have not seen one live Royals game on TV, and I'm not real mad about it.  As long as I have it on the radio, I'm cool.  However, the problem is my Royals radio affiliate has been lackluster. First and foremost, they haven't played any day games on their FM station (all of them have been AM, and I can't get them).  That means all the Sunday games, Opening Day, and a couple weekday games.  Not to mention ones I've missed because of not being home.  I have compensated by deciding to listen to more Minor League games this year.  I'm trying to catch two a week, no matter what team, any affiliate.  Last week I listened to 5 games in one day (2 full, 3 part), and two more earlier in the week.

This weekend I missed Saturday's and Sunday's Royals games.  Now I'm already mad, but to pile it on, if you missed it, Oakland and Kansas City decided to get into a pissing match.  It doesn't matter what side you are on, it's time to move on.  It already happened, they meet again in June, we'll see what happens then.  However, fans and players, and even the media can't get over it.  I am just tired of hearing about it.  So its time to go to my happy place to make me feel better.  I will combine it with some stuff I got on Saturday. 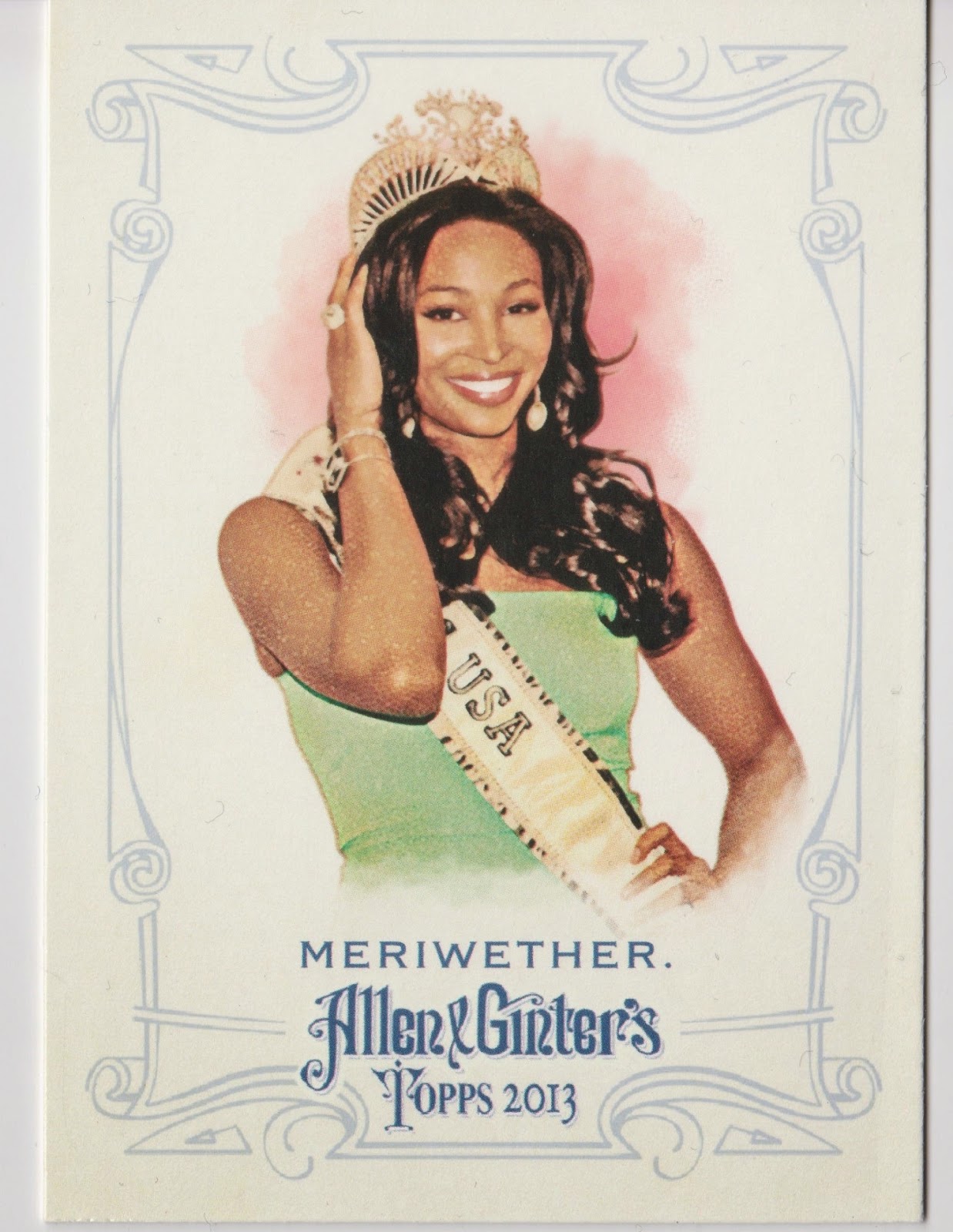 I won this card on Listia, I got it a few days ago with another card I'll show later.  Not a bad card, a Miss USA!  That makes me a bit more happy. 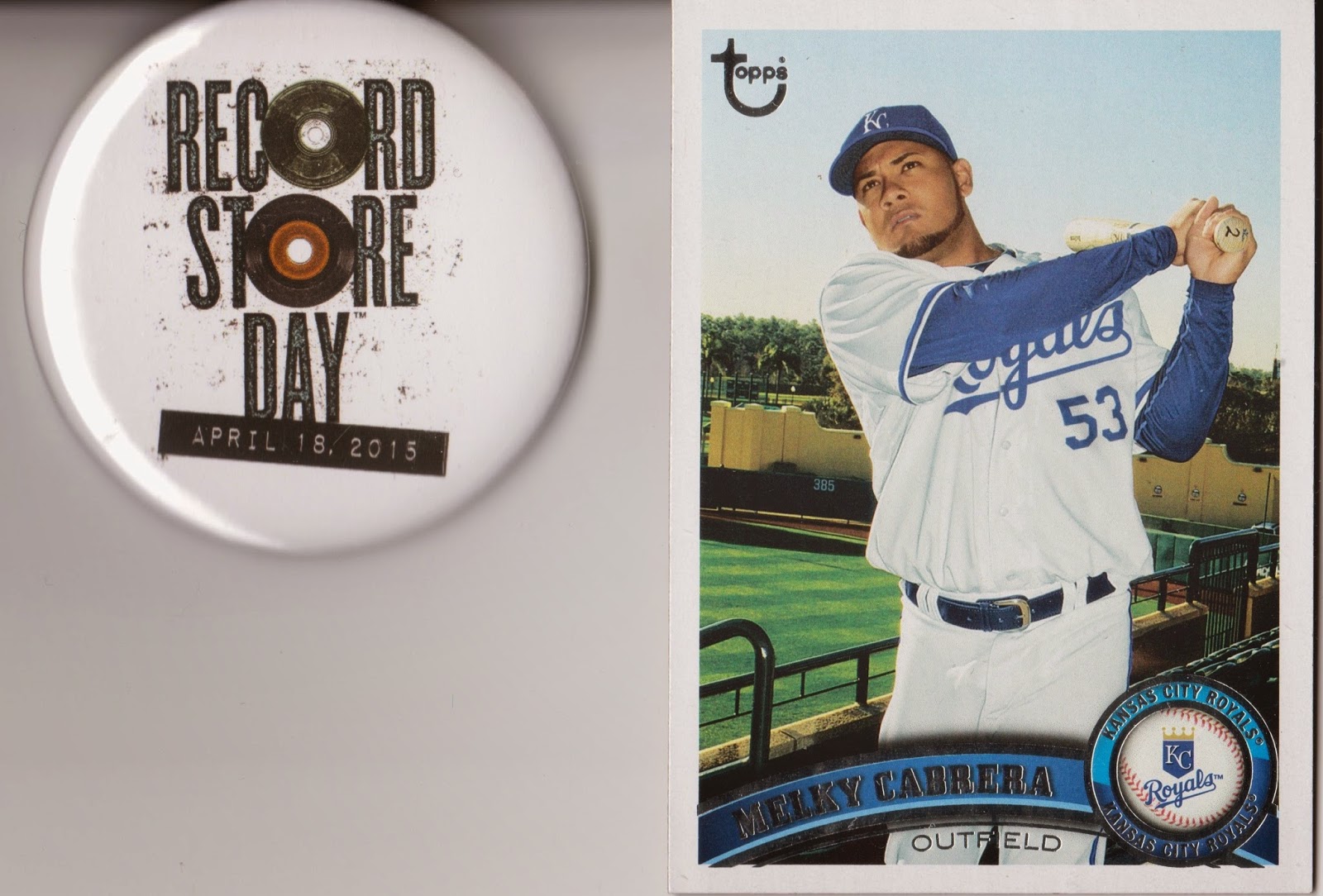 The Melky card is another card I recently got.  I didn't have any of these variations, so when I found it cheap, it made me smile.  The pin is one I got before the Mizzou game on Saturday.  Saturday was Record Store Day.  I've wanted to go to a record store on that day the last few years but finally got to this year.  My friend wanted to stop in to get the new Mountain Goats vinyl.  I went the cheaper route and bought 4 CD's for $2. 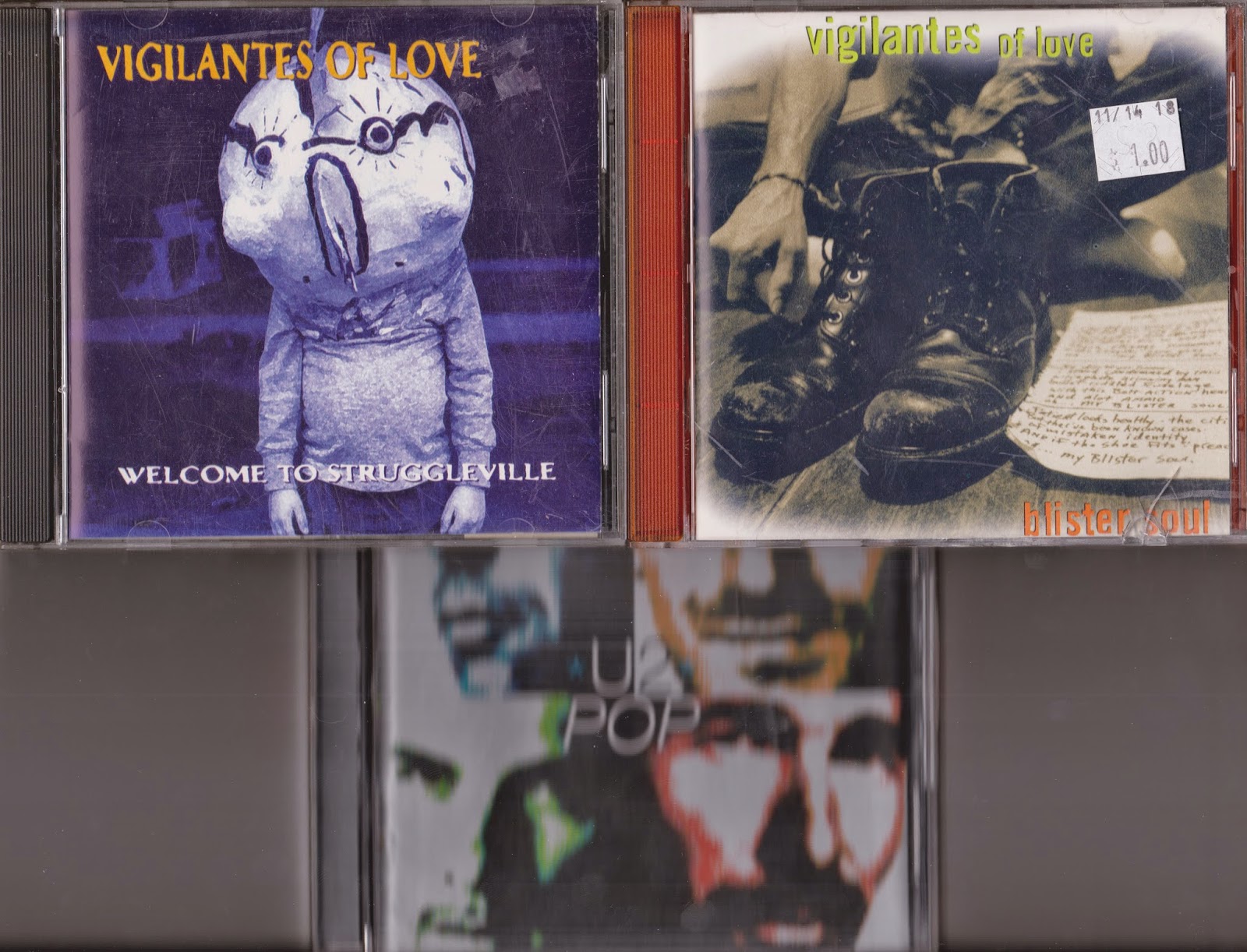 The CD not listed was a Jim Brickman CD I got for my mom.  The selection wasn't real great to be honest, but I got these because of the VOL CD's.  The Vigilantes of Love is fronted by Bill Malonee.  On my personal twitter page you might see in my bio it says "ex web site news administrator".  I didn't make that up.  In the mid-00's I was a music news administrator on a Christian Music website called Music Refuge.  The Vigilantes of Love was one of the bands that I collected news about for the site.  I've heard of them since probably 2005 if not sooner, and it seemed for many years they would play Cornerstone Music Festival, one of the biggest music festivals in the US (300 plus Christian bands outside of Chicago I think it was).  Until Saturday, I had never seen one of their CD's or even heard their music.  So 2 of their CD's for $1 wasn't much of a risk.  I was fairly happy with them.  The other CD is U2's CD- Pop.  For whatever reason, I have never owned this CD, but just for the song Staring At The Sun, it was worth it.  Having Discoteque on it helps slightly too.  So $2 for 4 CD's makes me happy.

When we got to the Stadium, a guy on a golf cart stopped.  "You guys want a free luggage tag?"  I'm not saying no to something free, so "Sure!" 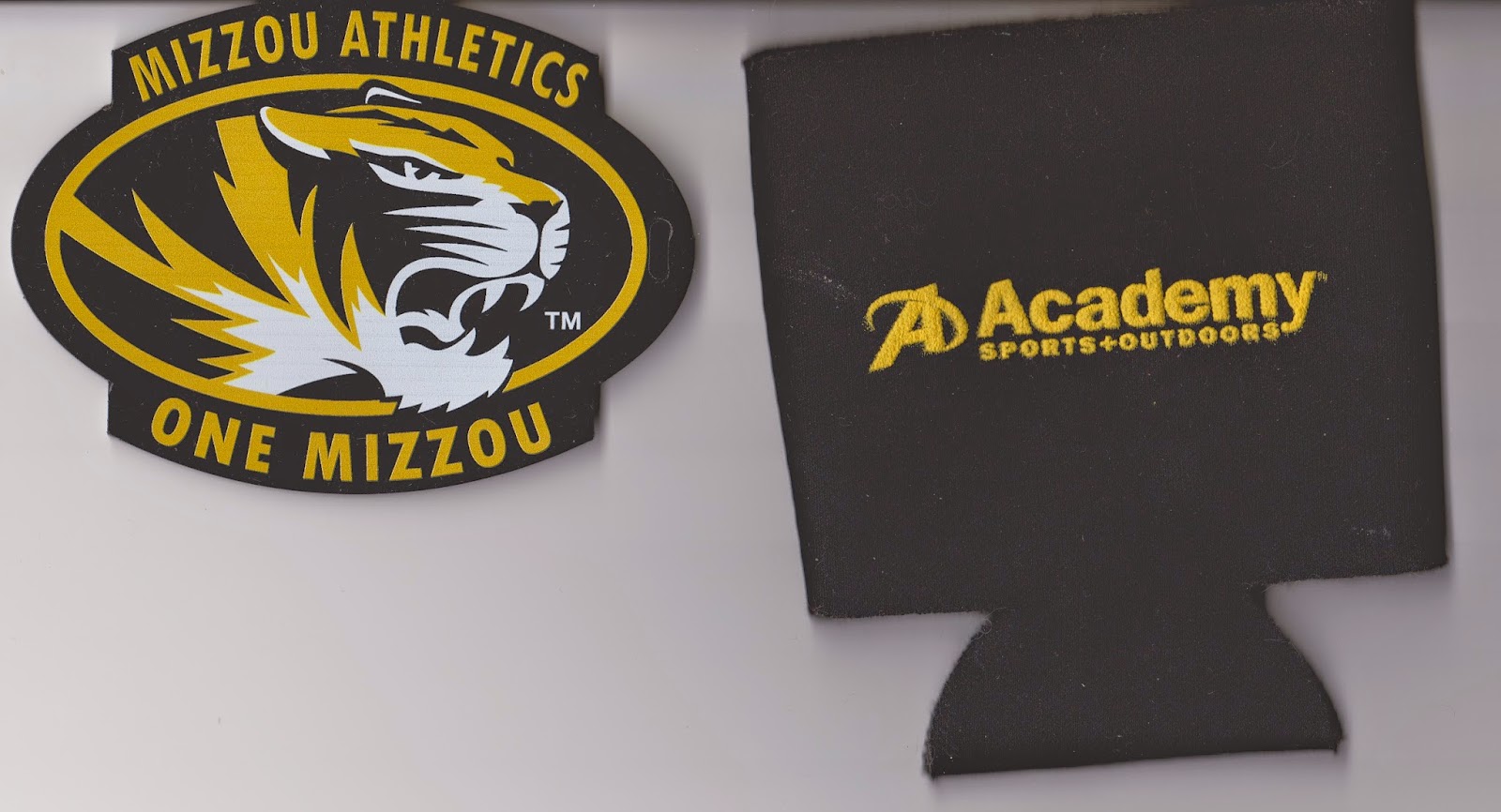 Later, I also got a can koozie.  Inside the koozie were more goodies. 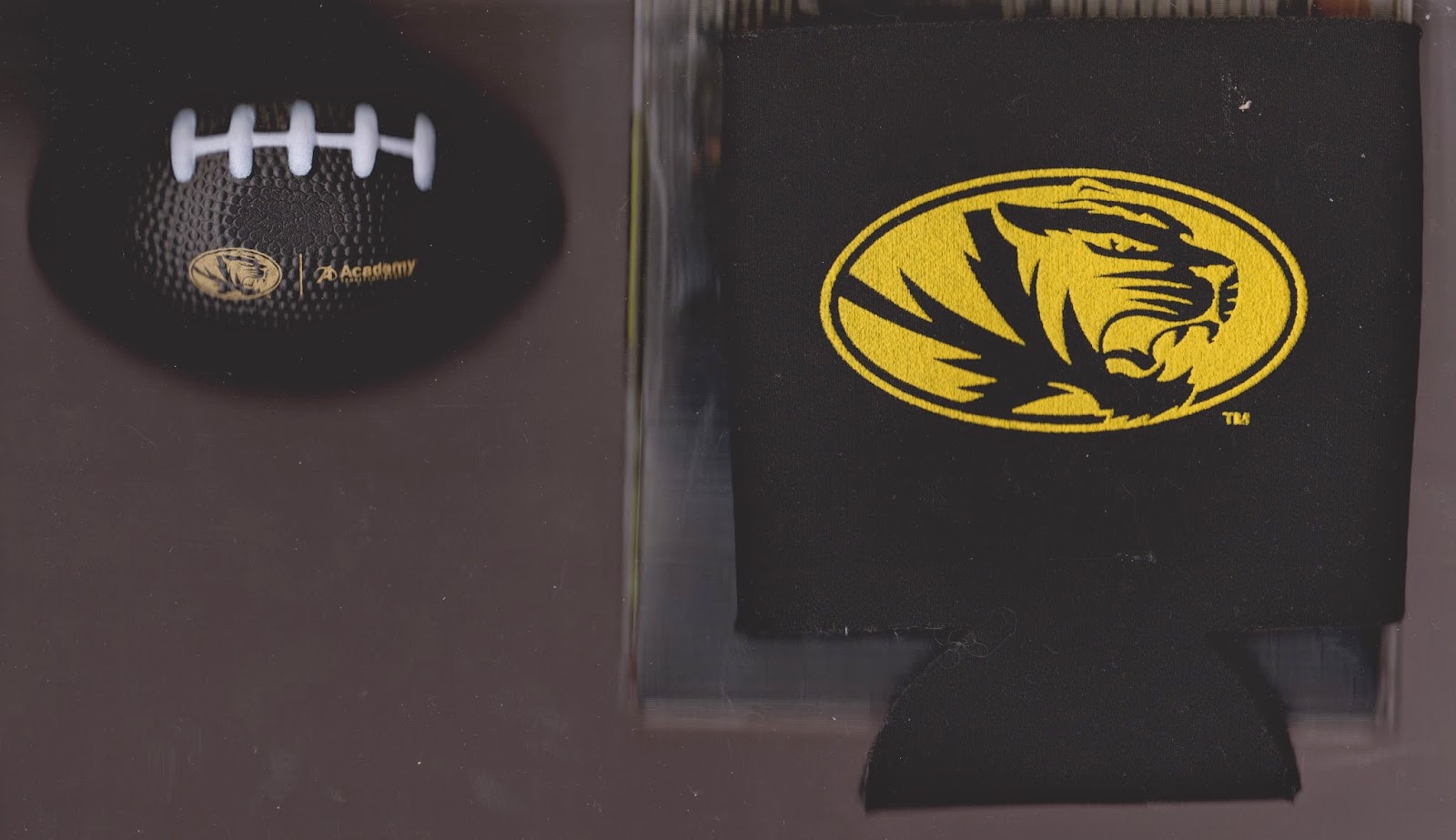 Nice little football I must say. This is the other side of the koozie.  Also inside was a rally towel. 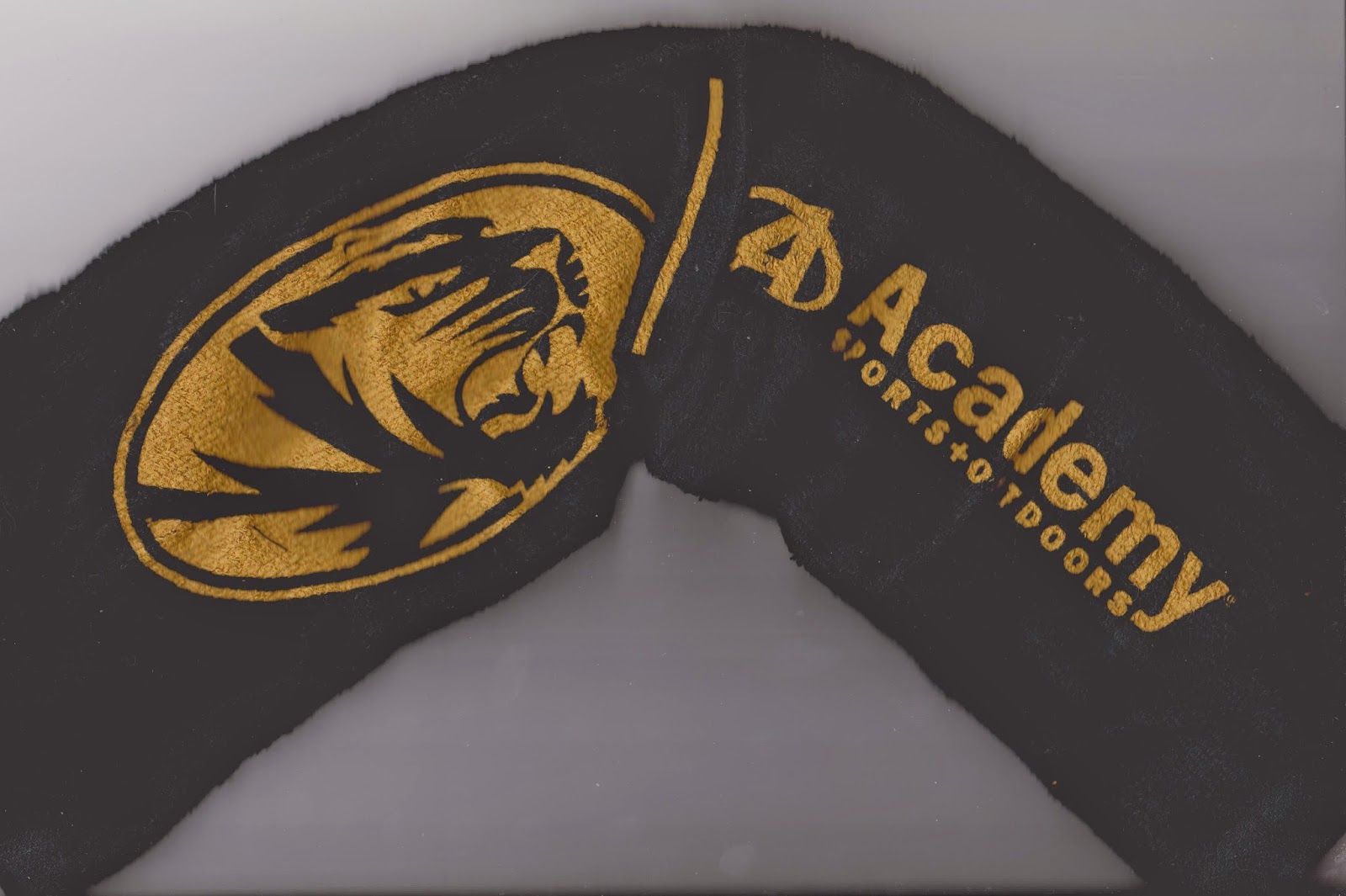 My second one in the last year I've gotten, this one is a little different though.  I'll find a good use for it.  I'm starting to feel better. 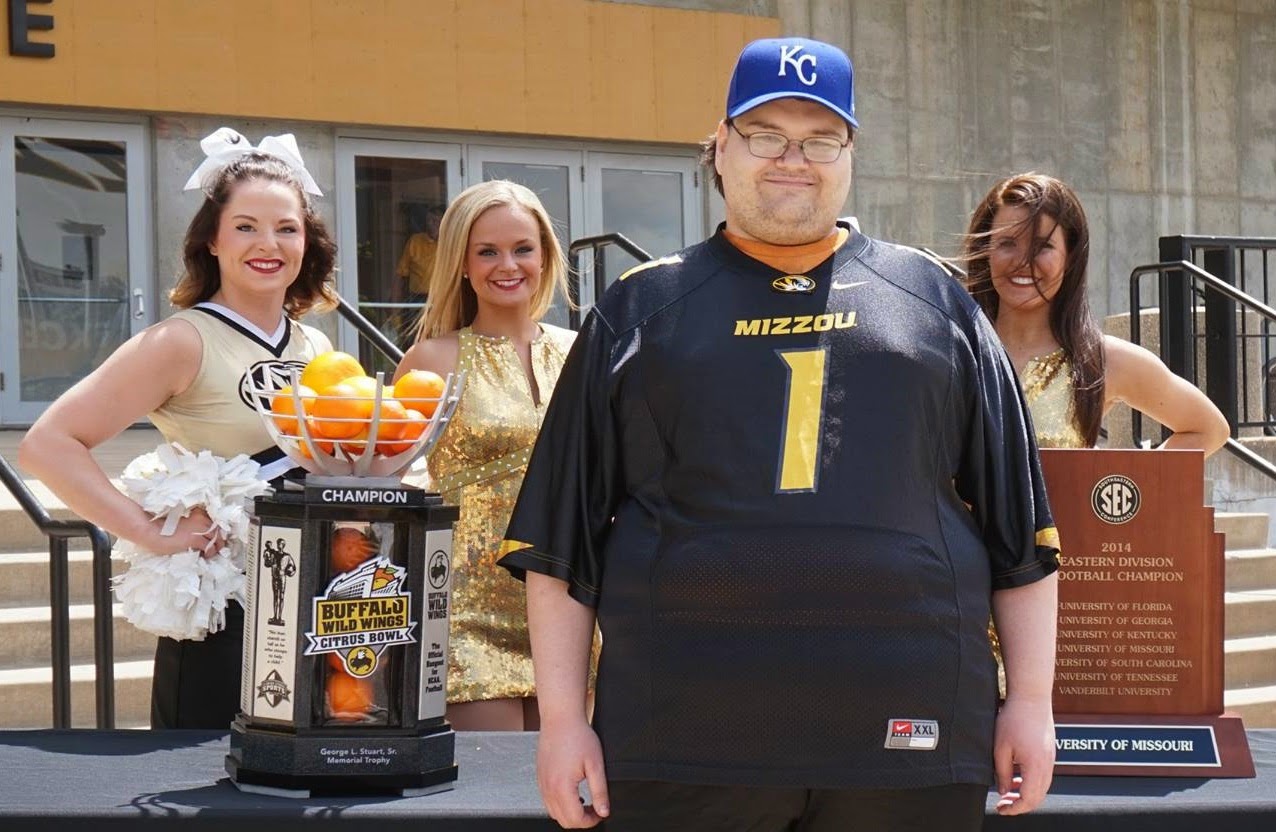 I got my picture taken with the Citrus Bowl trophy and the SEC East Champions trophy too.  I also got to stand in front of the famous Golden Girls.  If I'm not happy after this, then I have real issues.

I forgot to mention, the friend I went with is the one who runs the Talkin' Truman blog and has been amassing a good amount of Mizzou cards as of late.  He had some doubles that he decided to give to me.

DGB may be considered an Oklahoma Sooner to many, but he never played a down for them after going there, so technically he's still listed as a Missouri Tiger.  Also got a Marcus Murphy and Michael Sam card.  I really like the Sam card.  That looks like a good set.  He also gave me a few more. 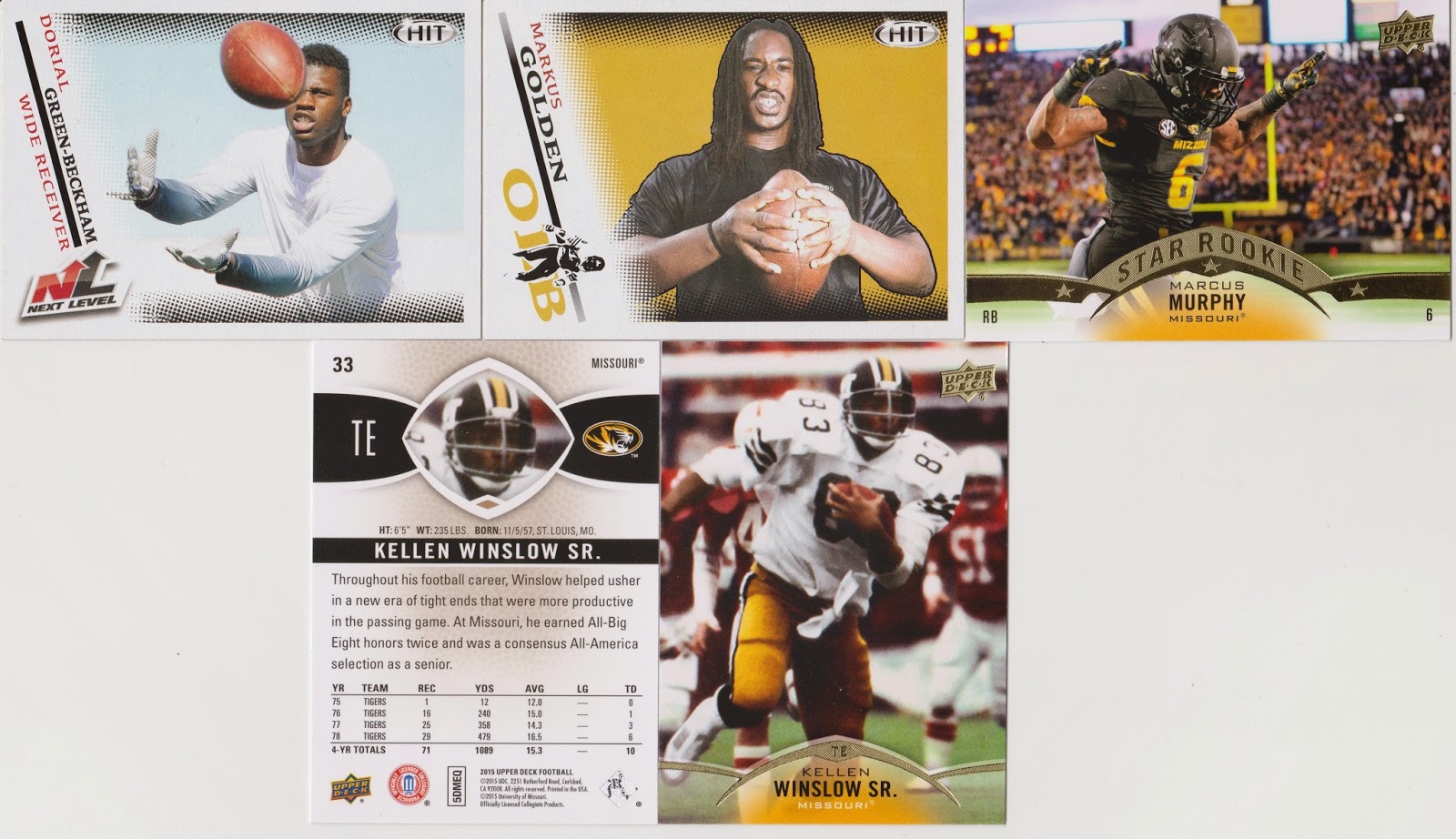 Another DGB, a nice Marcus Golden card, and another Murphy (which I just won another one of off Listia today).  He also gave me two copies of this awesome Kellen Winslow card (no need to add the Sr, he's the original!).  I'm in my happy place now.

I'm so happy that I'm not sure I can show this last card.  The card I originally got with the Miss USA card at the top.  It's been one I've wanted for quite a while (since I heard she had a card).  Now I finally have it. 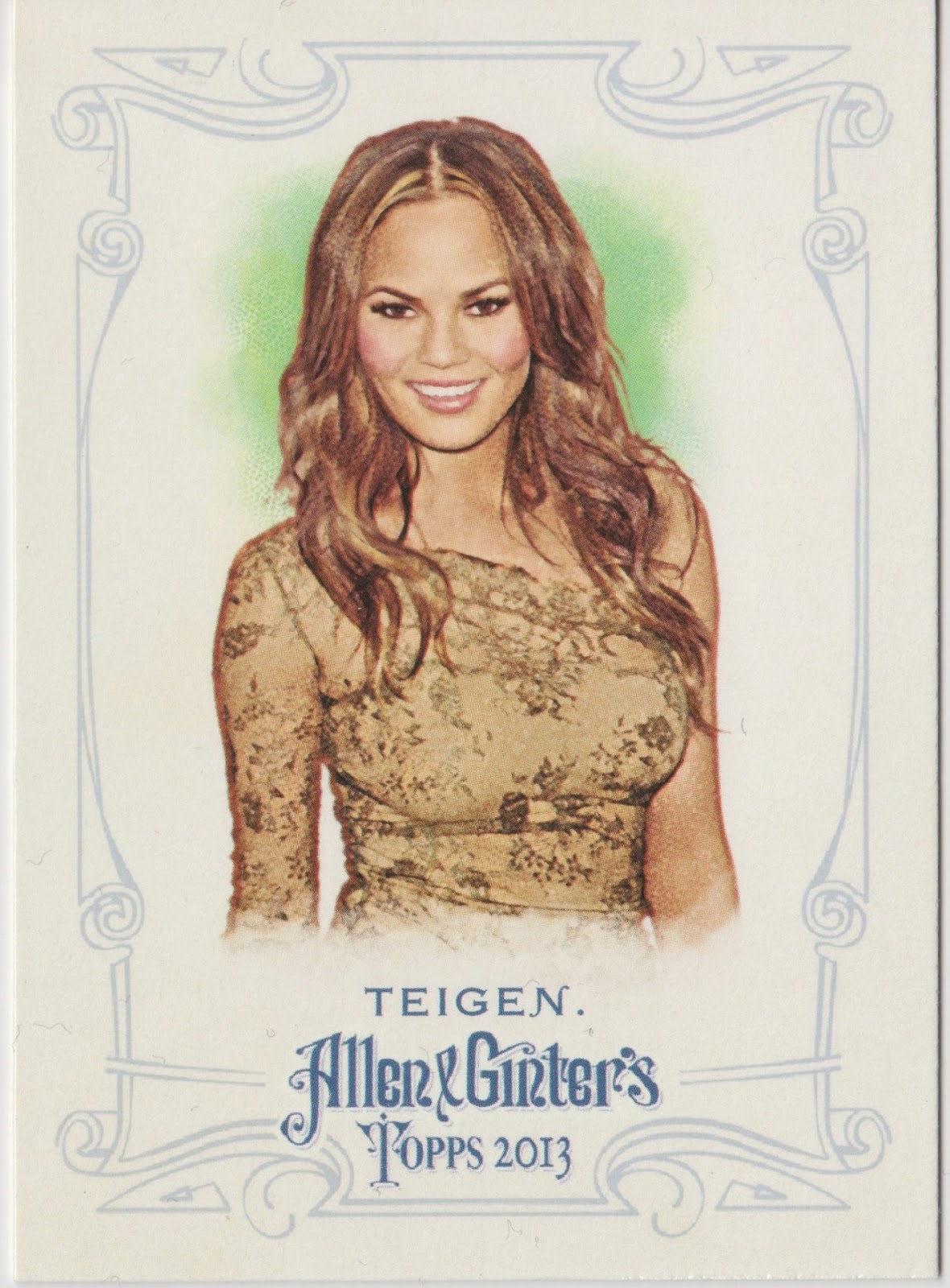 Ahhh, I'm smiling ear to ear now.  I think that will wrap it up tonight, thank you for allowing me to go back to my happy pace, and hope everyone has a great night or day depending on when you read this.