As I sit here on a busy overcast potentially rainy Opening Day, it is a very odd feeling.  It is my oldest sisters birthday, my best friends wedding anniversary, and also the date my other sister passed away.

In addition to all that I had go on a quick trip today to pick up a prize, it was from a radio station, but I'll talk about that later.  I also made a trip to Walmart and Dollar Tree.

It's been an odd day because its Opening Day in Major League Baseball.  A day that gets me pumped up for the year.  I was tired last night and fell asleep listening to the Cardinals game.  This is the first year in a while I don't have a big cable package and as a result I won't be able to catch many Royals games (its fine for the most part but I love watching Opening Day).  What made it worse is the fact that my local radio station (oddly, the same one I won the contest from) is the Royals affiliate.  If the Royals have a day game, they regulate it to the AM station and I can't hear it.  So not only did I miss seeing the game, I missed hearing it.  Thankfully people on twitter were kind enough to keep me posted.  Hopefully I can see some highlights.  Hopefully I can catch some games soon.  I did get to see Max Scherzer fall in his Nationals debut, and whatever else ESPN shows (too bad I don't get ESPN2).

Anyway's having said all that, I have some cards to show off.  I have put them off for a while, but since today is Opening Day, I might as well show off some Opening Day cards from Topps.  I bought a box a while back (11 packs in a box for 10 bucks is a good deal).  My initial complaint is I think Opening Day cards shouldn't be released until AFTER Opening Day... or at the least ON Opening Day.  Anyways, I took the chance purely based on how much I like the Topps design this year, and these are the results. Normally I wouldn't buy a box, but for $10 I thought it was a good deal. Thought I would show the odds in case I pulled something. 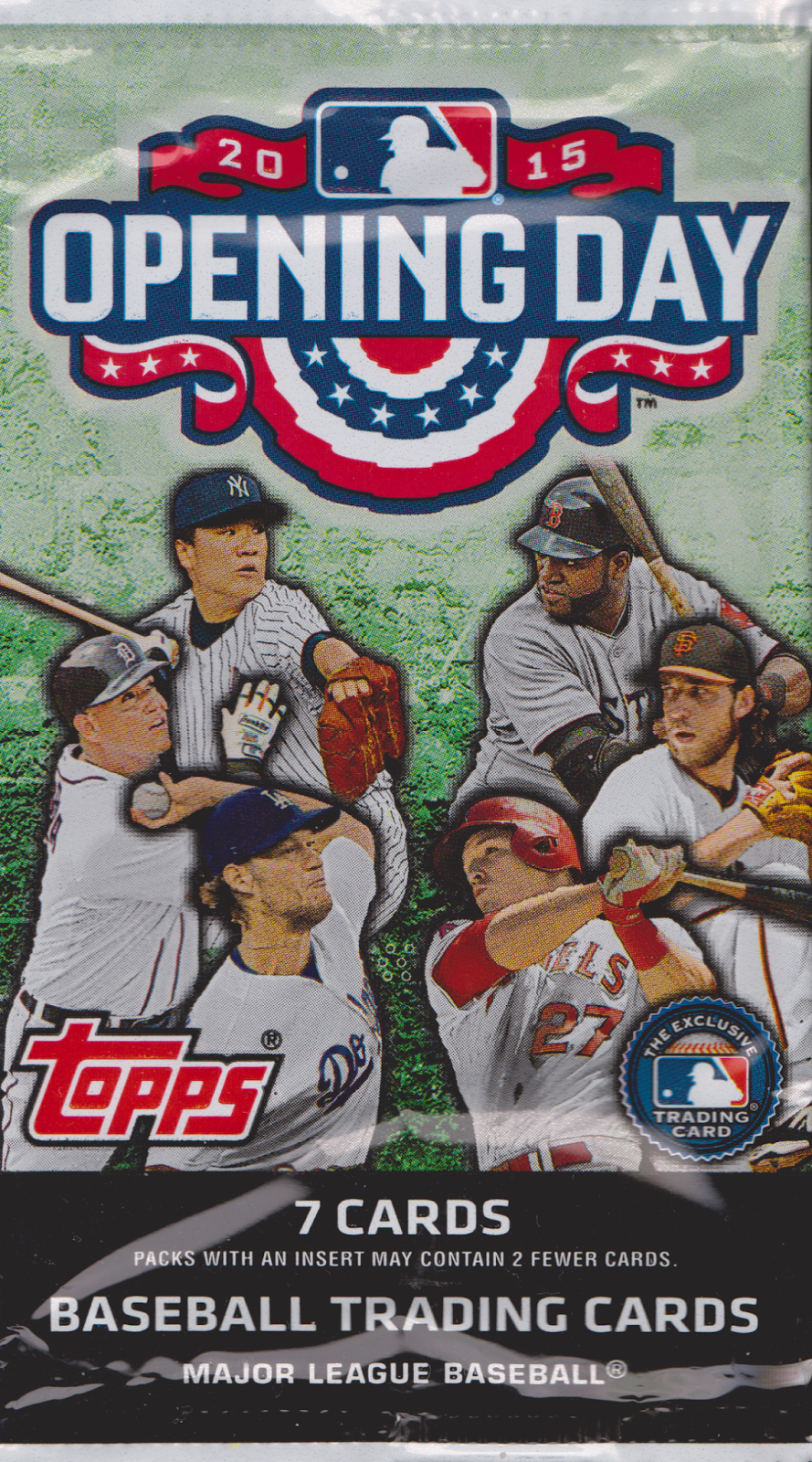 77 cards isn't too bad.  Let's hope I get some Royals.  Enough with the packaging, let's see some cards.  First some base cards.

I'm not sure why I decided to showcase these (I'm not showing all the base cards, just a few).  Nice dive by Simmons.  The Blanco card is good too, but the Opening Day logo takes a bit away from the card, I think it should have gone in the top left corner. 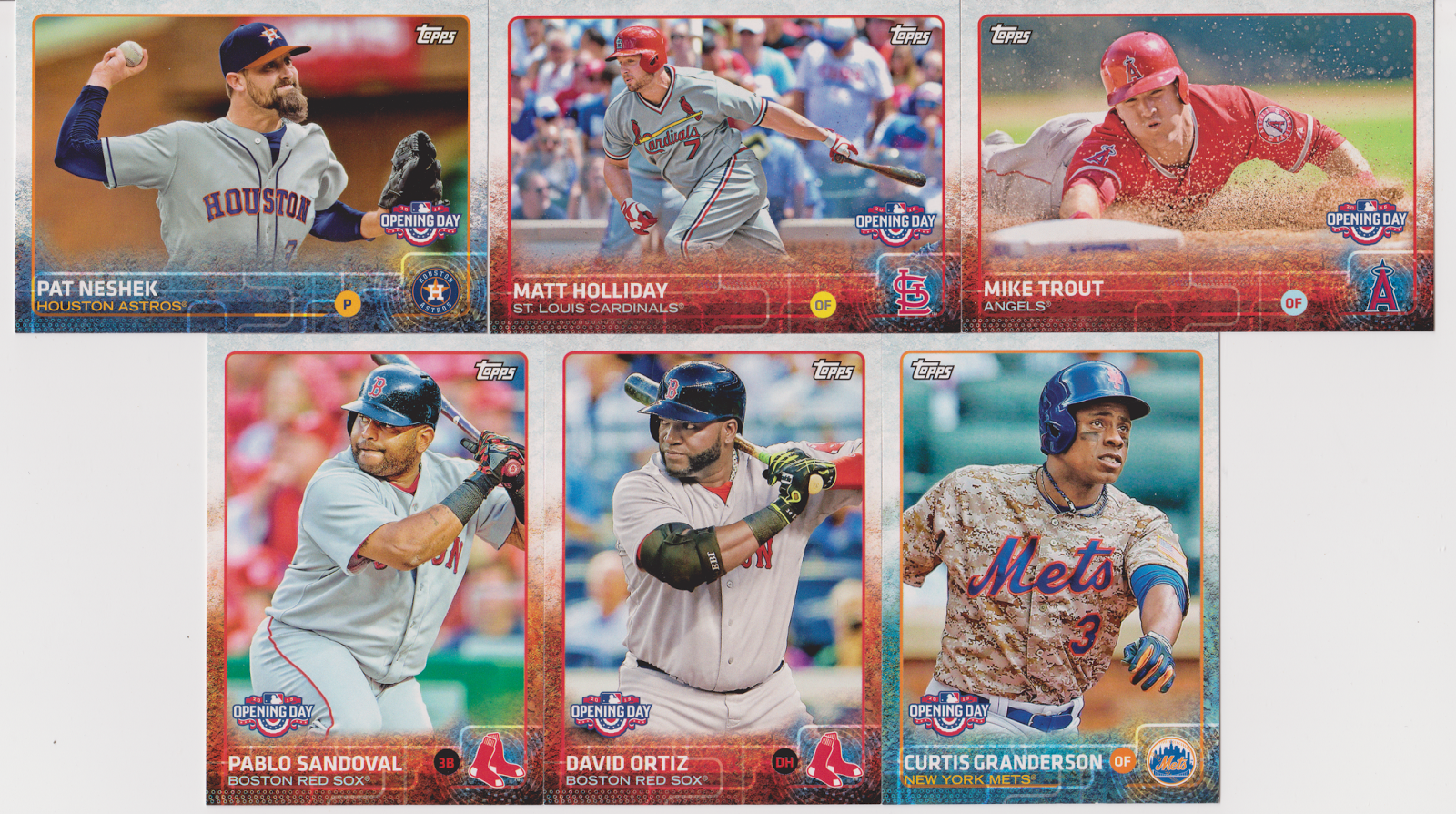 I think this is the first Pat Neshak card I pulled.  Maybe I should send it to him to get it autographed.  Has anyone done that?  It's worth a shot.  I'm not a Matt Holliday fan, but its a good card so I included it.  The Trout card isn't that great of a card, but I had to show it off.

Pablo in Red Sox gear?  Not a bad airbrush.  It is a noticeable difference when compared to Ortiz's jersey.  If they hit well, Boston could be destructive.  Next is Curtis Granderson.  I'm not the biggest fan of the camo jersey, but this one looks really nice.  It actually works. Chase Hedy is next... THAT'S HEADLEY!  Sorry after seeing Blazing Saddles so much, whenever I see his name I have to say it.  A Ryan Howard card means I won't have to search for one on Listia to add to my Missouri State collection, not that I've been doing much with it lately.  Next is Young Joc.  Joc Pederson to be more precise.  I would like to see more Dodgers games to see how good he is.

Dustion Pedroia is next, figured he was a big name so I included him.  Following him is a pair of Cardinals.  Fans around here love Wainwright, and its easy to see why.  I think Bourjos is starting to grow on them, but it still might take a while.

Finally a ROYAL!  To be honest, this was my #1 card on my wishlist for this set.  Glad I got it.  I can't wait to see how he develops.  Finally is the man who beat the Royals- Madison Bumgarner.  Against any other team last year, I'd have love to seen him excel.  I hope we can exact revenge this year. 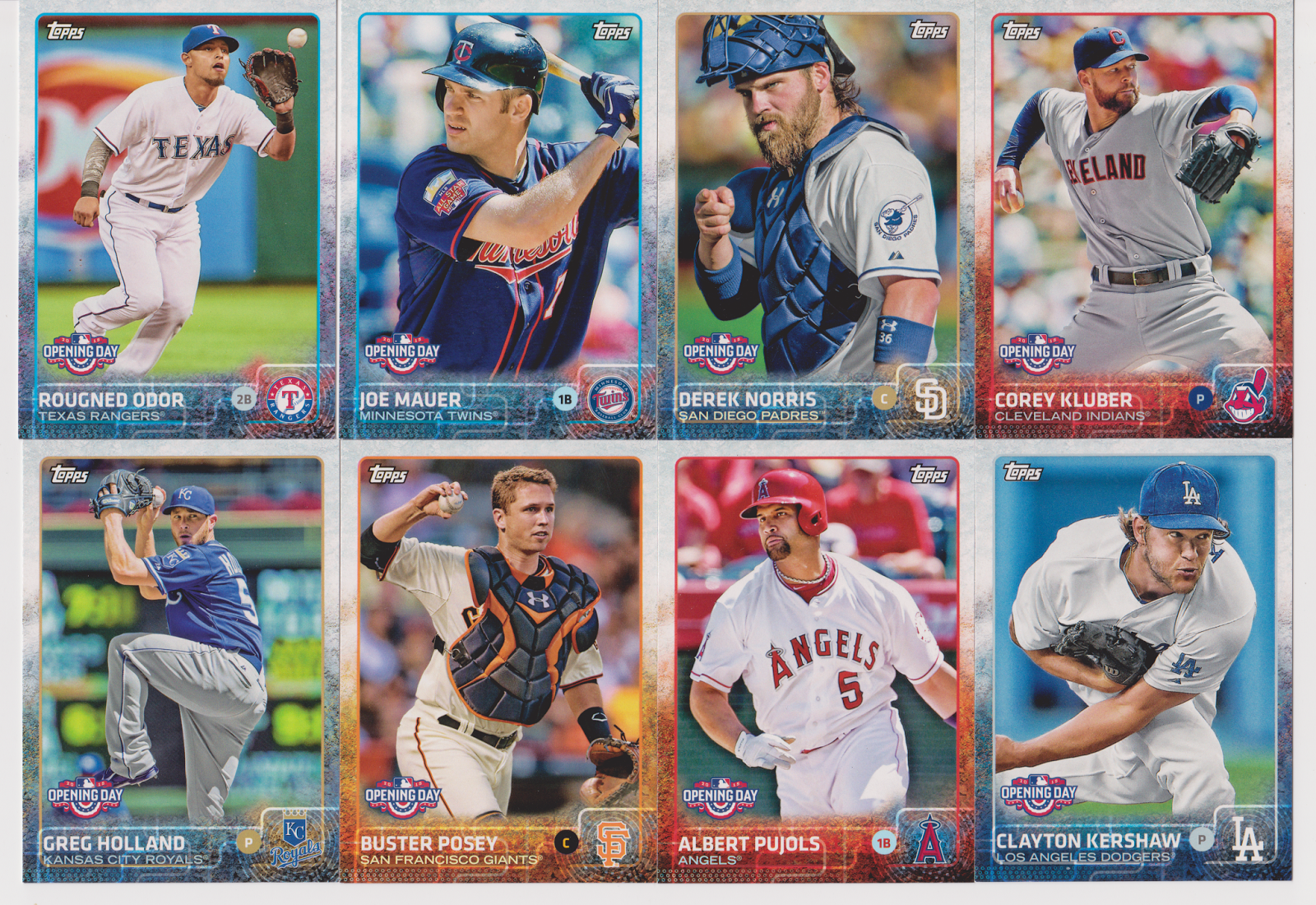 Here's a few more you might have heard of.  Adding a Holland makes me happy as it gave me justification for buying this box.  Not $10 for 2 cards, but I think other cards thrown in make up for it.  One of those being Albert Pujols, which I should probably make a PC list soon for him.  Corey Kluber is pitching the game I'm watching now.  I saw the Indians play in KC last year, and its possible I might this year too.  I hope its not against him as he is pretty good.

Lackey as a Cardinal could at the least temporarily go in my Cardinals collection.

I also got some non-base cards.  I got two Matt Barnes cards, can you spot the difference?  Honestly, I'm not big on the color variation cards, but these did turn out nice.

So what other inserts did I get? Superstar Celebrations!  I like the concept, but the Pujols card doesn't do much for me.  Sure it will stay in my collection, but I'm glad I don't have to chase it.

HIT THE DIRT!  Again, nice concept, but the Cain card (which I love the picture), doesn't show him hitting dirt.  It's kind of pointless.  Though it is another Royal so I'll take it. 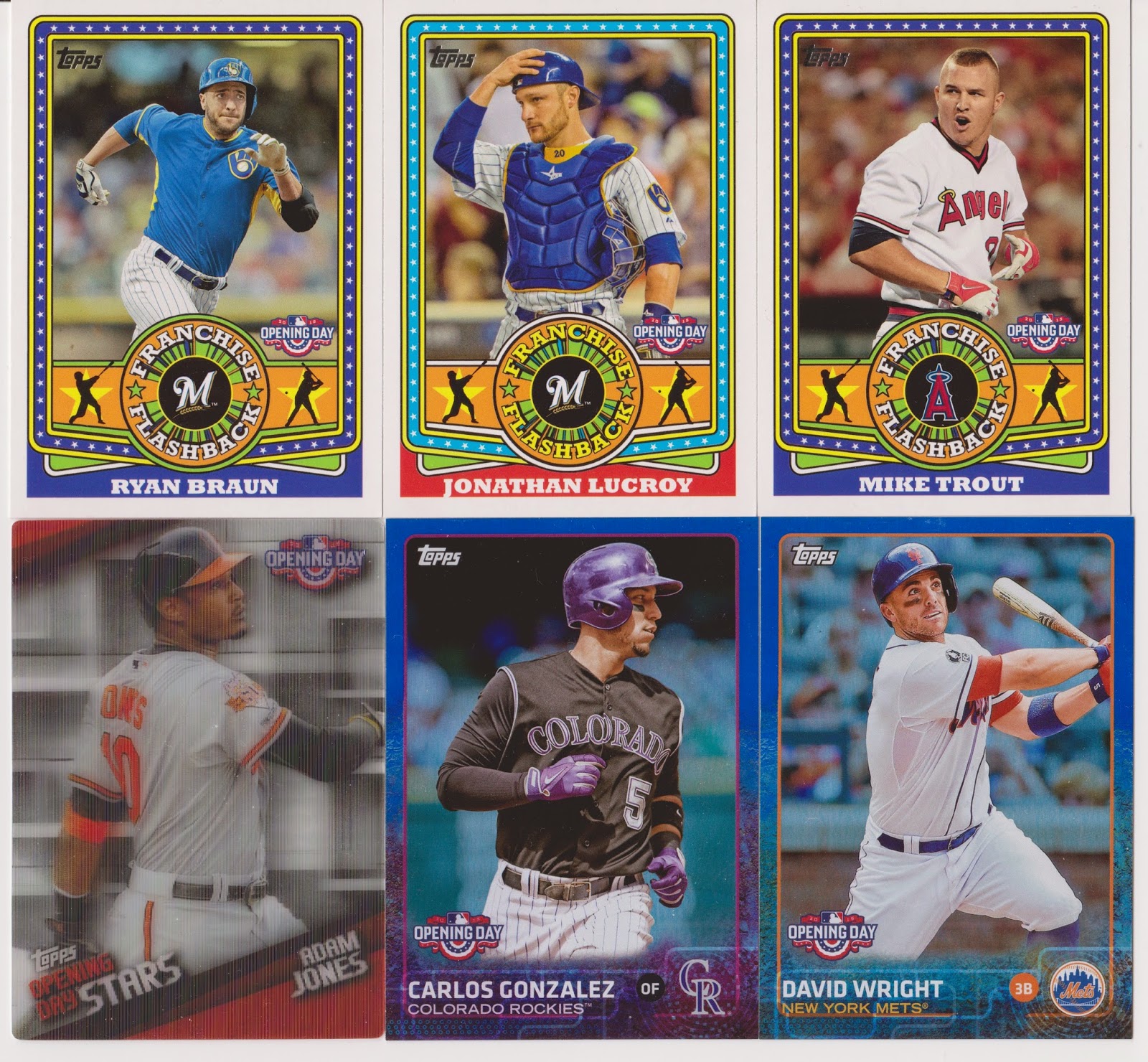 FRANCHISE FLASHBACKS!  These cards look amazing!  I am in love with these cards.  I may try to work on a set at some point.  Not something I need, but I'm amazed I love an insert set so much.

OPENING DAY STARS!  On the flip side are these cards.  I haven't been a fan of these the last couple years and while I like them a bit more, they still do nothing for me.

More color variations, CarGo and Wright are nice ones to have, but not ones I really need.

I saved these last two insert sets for last.

STADIUM SCENES!  The concept is pictures sent in by fans posted on cards.  Concept wise this is a great idea!  Execution wise these are horrible!  Not just horrible, ABYSMAL!  One is a picture of a baseball!  WHAT STADIUM IS THAT?  ANSWER: IT COULD BE ANY STADIUM!  If memory serves me, this one is of Camden Yards.  It is a nice picture of a card, but it does nothing to show off the greatness of the Stadium it is supposed to represent.

The other is of Busch Stadium (which I think is Busch Stadium 5 for those keeping track).  The ideal shot is showing the Gateway Arch and finding a way to show the outfield grass which replicates the Arch (which I'm not a fan of, but still).   Instead we get less than half an arch, and an advertisement and a building in the background.  AGAIN, it does nothing to show off the Stadium.  Either the fans sent crappy pics, or Topps really dropped the ball on this set.  If they bring it back I hope they take the shots, or get people who pick better pictures.  Sorry for the rant, but these are... ABYSMAL!

Redeeming the box somewhat is the Mascots.  I like this subset, but one thing has bugged me for a while.  They never name the Royals mascot (its SLUGERRRR!) instead they put Kansas City Royals.  HE HAS A NAME!  Instead I get Slider who I don't remember ever hearing of, but looks kinda cool, and the World Famous Phillie Phanatic.  I am happy to get that one.  If Topps made minor league sets, I'd love to see some based on the wacky Minor League Mascots.  One they must include would be the Royals minor league team, the Wilmington Blue Rocks.  One of their mascots is Rocky Bluewinkle. Clever.

So after opening the box, I had mixed feelings.  Almost 70 base cards of a 200 card set puts me in good range of maybe completing the set.  Some inserts are nice, while others are very lacking.  I guess I'm happy I got these cards, so much so that today I bought another box.  I already opening them, and some good cards to show you next time.  I need to scan them and also need to see how close I am to completing the set.  Gives me something to do while watching the rest of wrestling or the rest of the Astros vs. Indians game.