Today is Greg Maddux's birthday.  To me, he is the best pitcher of all time.  I may have never seen Walter Johnson, Satchal Page, anybody from the 70's or older, or even Nolan Ryan at his best, but even if I did, I would make a strong argument for Maddux.  Some may say he wasn't as good as his contemporaries such as Roger Clemens, Randy Johnson, or the ilk, but I would say you're wrong.  He was a dominating pitcher that didn't have dominating pitches.  Speed kills, but he didn't need speed to do you in, for him it was about control.

As I was preparing this blog today I read something I never knew.  In 1992, he almost signed with the New York Yankees.  In fact, he took $6 MILLION less to go to Atlanta!  The Yankees were aggressively trying to build a strong front of starting pitchers.  Other names they targeted but failed to get were David Cone (who signed with Kansas City), Doug Drabek (who signed with Houston), and Jose Guzman who signed with the Cubs).  They also offered contracts to Greg Swindell and Chris Bosio, but both turned them down.  Just imagine how dominant the Yankees would have been with Cone and Maddux.  Would they have won more World Series?  Would they have been in the right spot to draft Derek Jeter? Would the Braves have made less playoff runs?  We may never know, and I'm happy we won't.  I didn't like the Yankees, and while I didn't care much for the Braves, I got to see them everyday thanks to Superstation TBS!  Maybe I wouldn't have big of a fan if I didn't get to see him pitch as much.  Maybe that's why I'm not as big on Clayton Kershaw or Madison Bumgarner as most other people are (I know they are great pitchers, I just never see them unless I catch them playing the Cardinals).

So in honor of The Professor's birthday I thought I would share some cards I recently added to my collection.  I still need to put them in my updated list, but should do that soon. 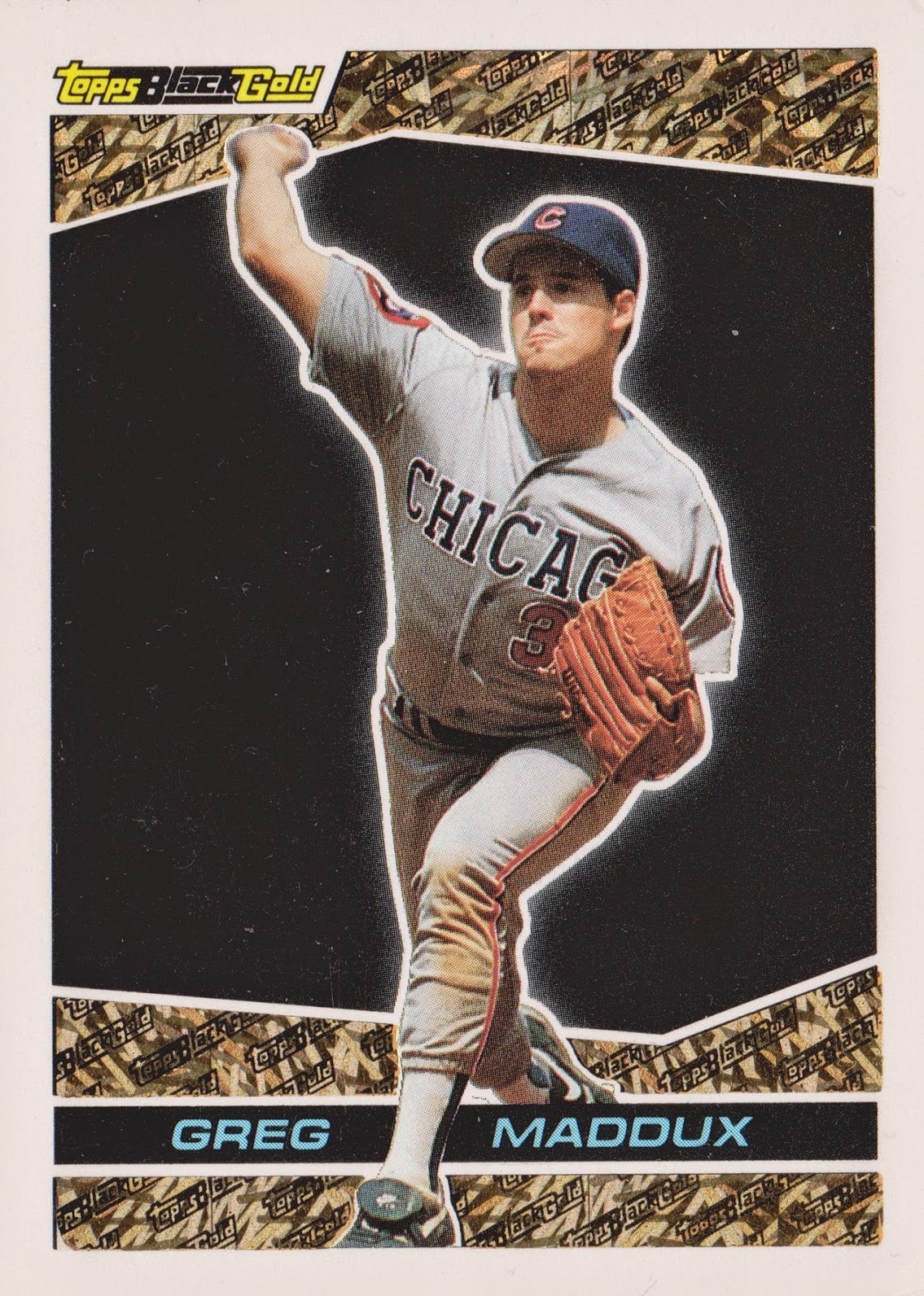 I've shown this before, but I got another copy of it.  Back then Topps Black Gold was something amazing, now it looks kinda blah.  I'll take this card any day though if its cheap enough. 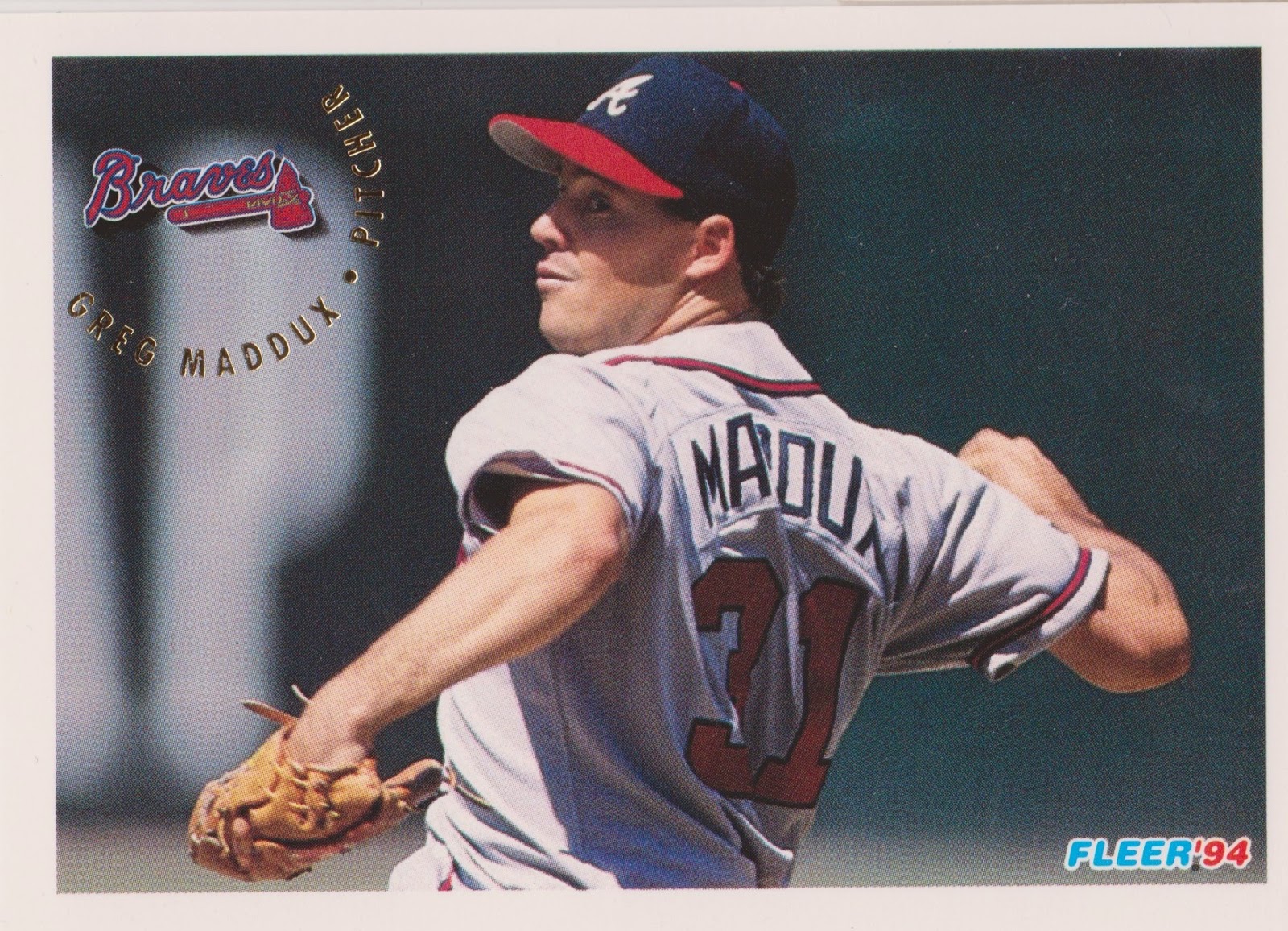 I hear a lot of people didn't like the 1994 Fleer design, but I love it.  It was just how the curved name and position around the logo that appealed to me. 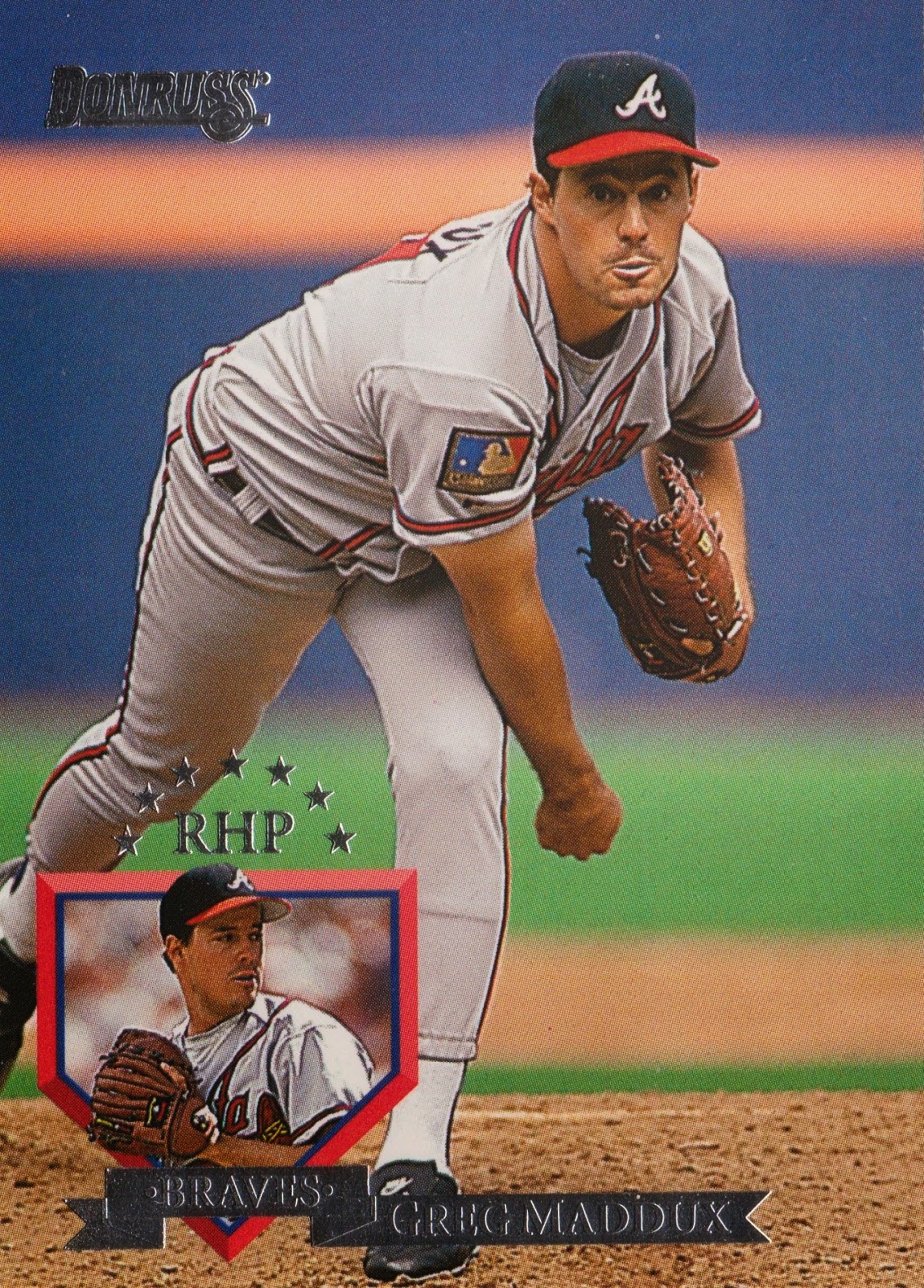 Another design I don't hear as many positive things about.  I liked this one too.  I think one reason I liked it more than others is because I wasn't exclusive to one brand.  I collected any card as a kid, I wasn't turned off if it wasn't a Topps card. 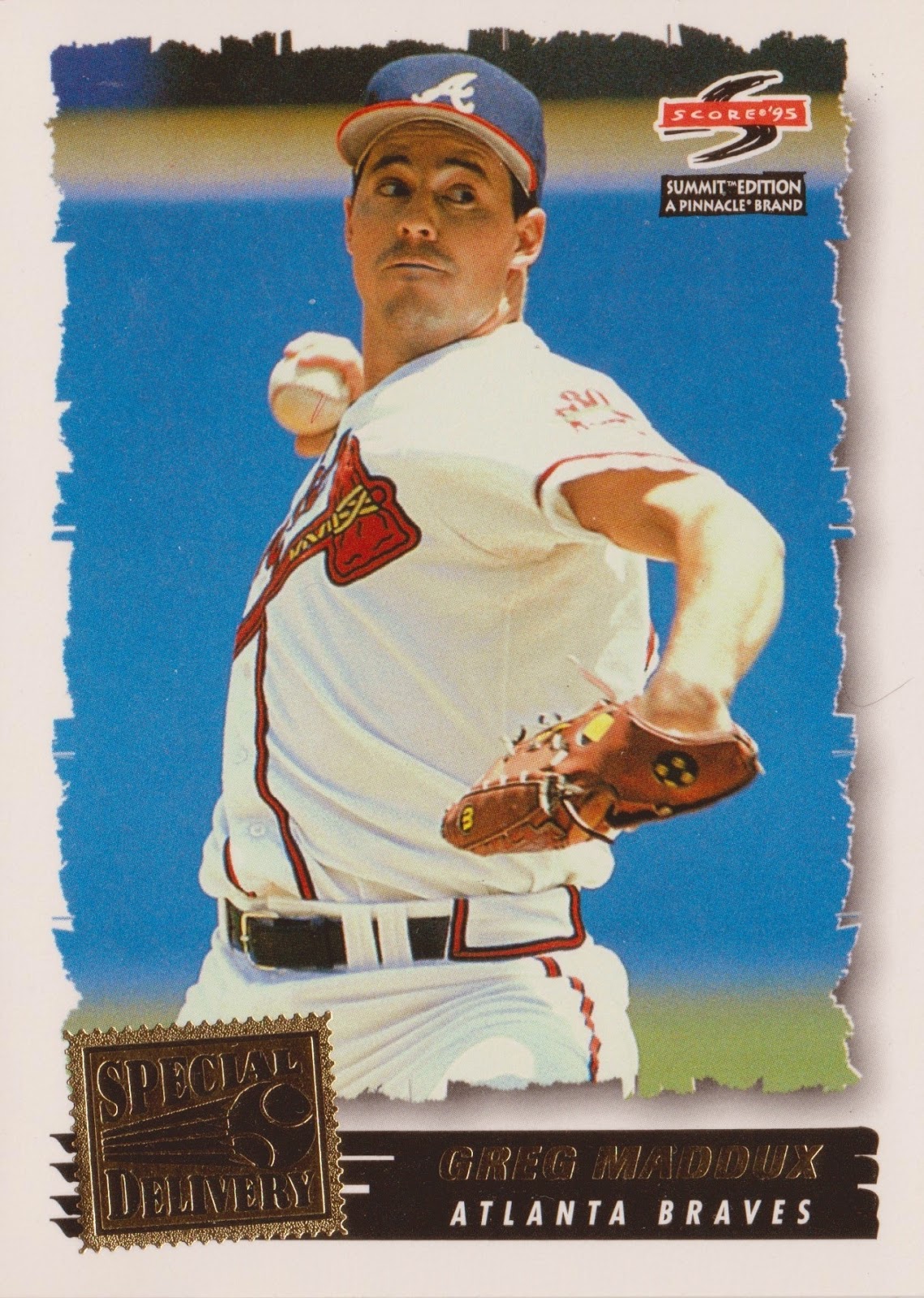 This isn't a card that I had ever seen before.  I like it though.  I also want to point out how much of a fan of the Braves jerseys were at the time.  I think if I lived in Atlanta, I could easily be a Braves fan.  If I wasn't so attached to the Royals, I would likely root for the Braves more, but truth is, I put all my energy into rooting for Kansas City. 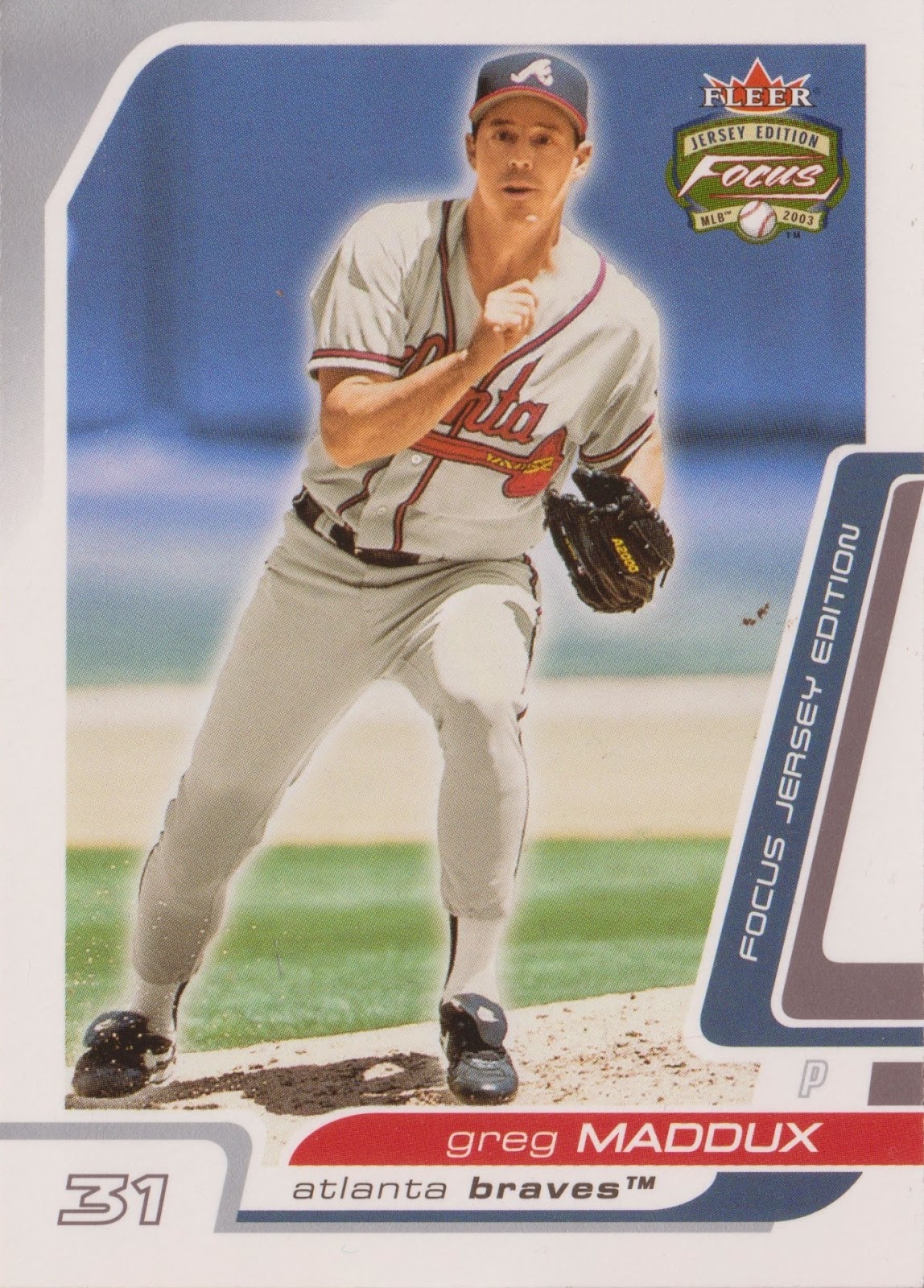 Another card I don't believe I've seen, but I like the design.  I really want to work on adding more cards of his during his Braves years.  Not really a goal, but I do want to find more of them. 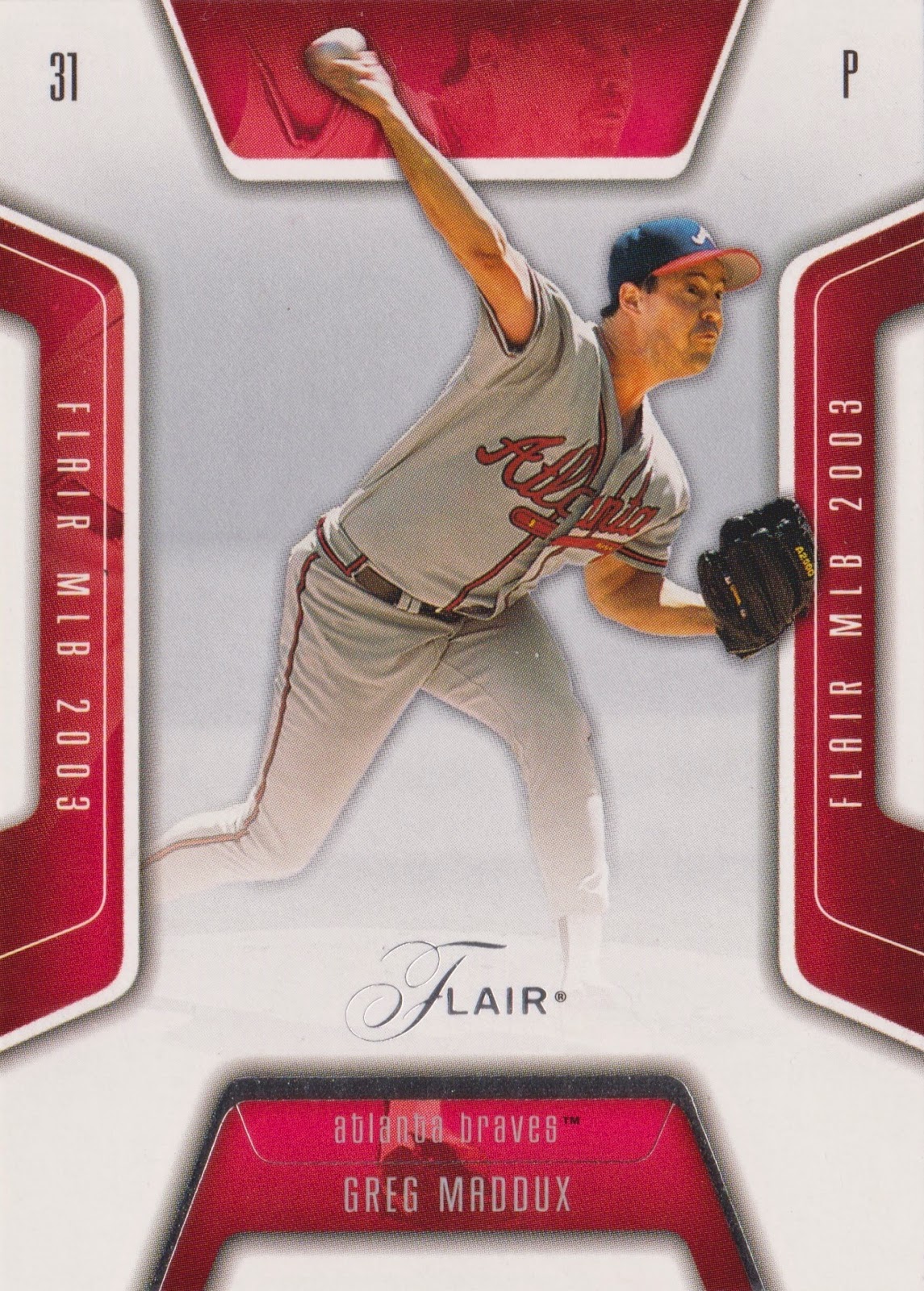 I don't really care for this design.  It's not very appealing to me, and at the least they could have used team colors on the card.  It just doesn't pop. 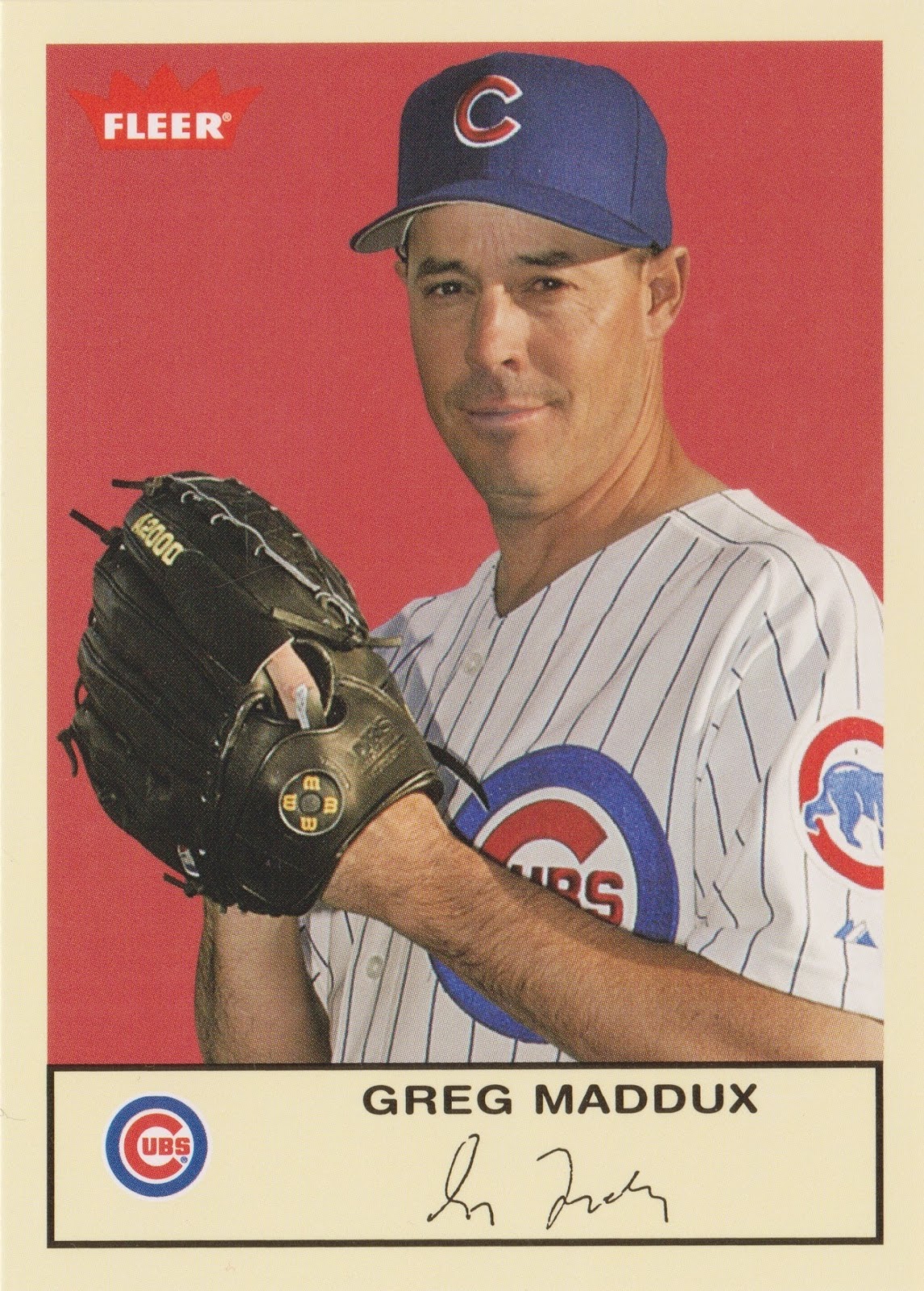 This card doesn't exactly pop either, but I really like it.  I would have possibly made the Cubs logo a bit bigger and would have had some sort of background.  I've always liked photos on the cards, never big on a solid color background. 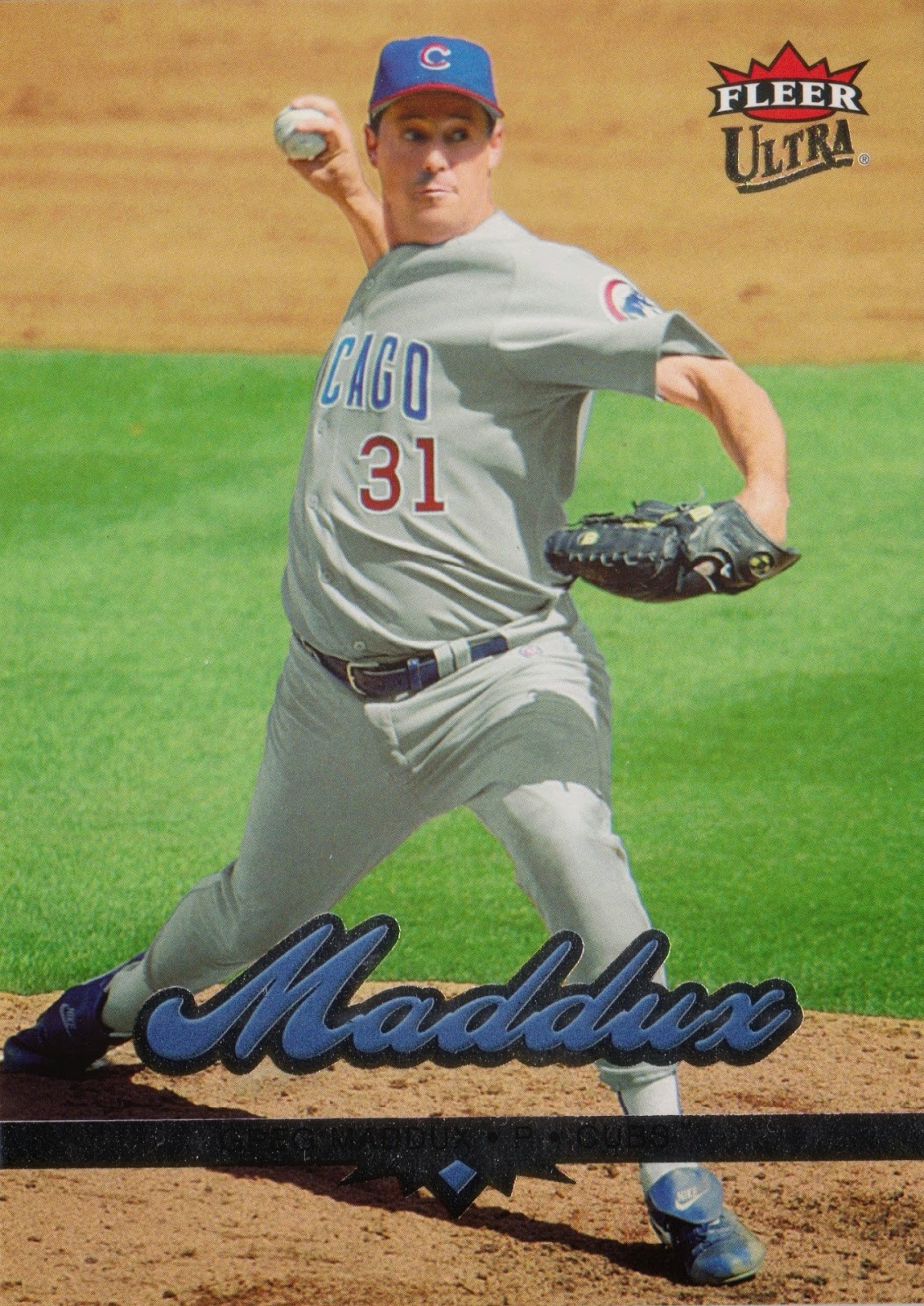 I'm 50/50 on this card.  I love the full photo, but the font's aren't doing much for me.  Much like the Braves, if I lived in Chicago, I could see myself as a Cubs fan.  No way I would root for the White Sox.  The Cubs are another team I would like a jersey of, though I prefer the white ones over these greys.  Since I'm cheap it's unlikely I'll ever get a jersey, but I might get a hat one day if I see one in my price range (i.e. bargain bin). That reminds me, I need to find the Giants and Pirates ones I bought a few years back for under a buck each.

Okay, these are all nice cards (well, sort of), some more than others, but this is the reason I wanted to get these cards.  I wanted one card. 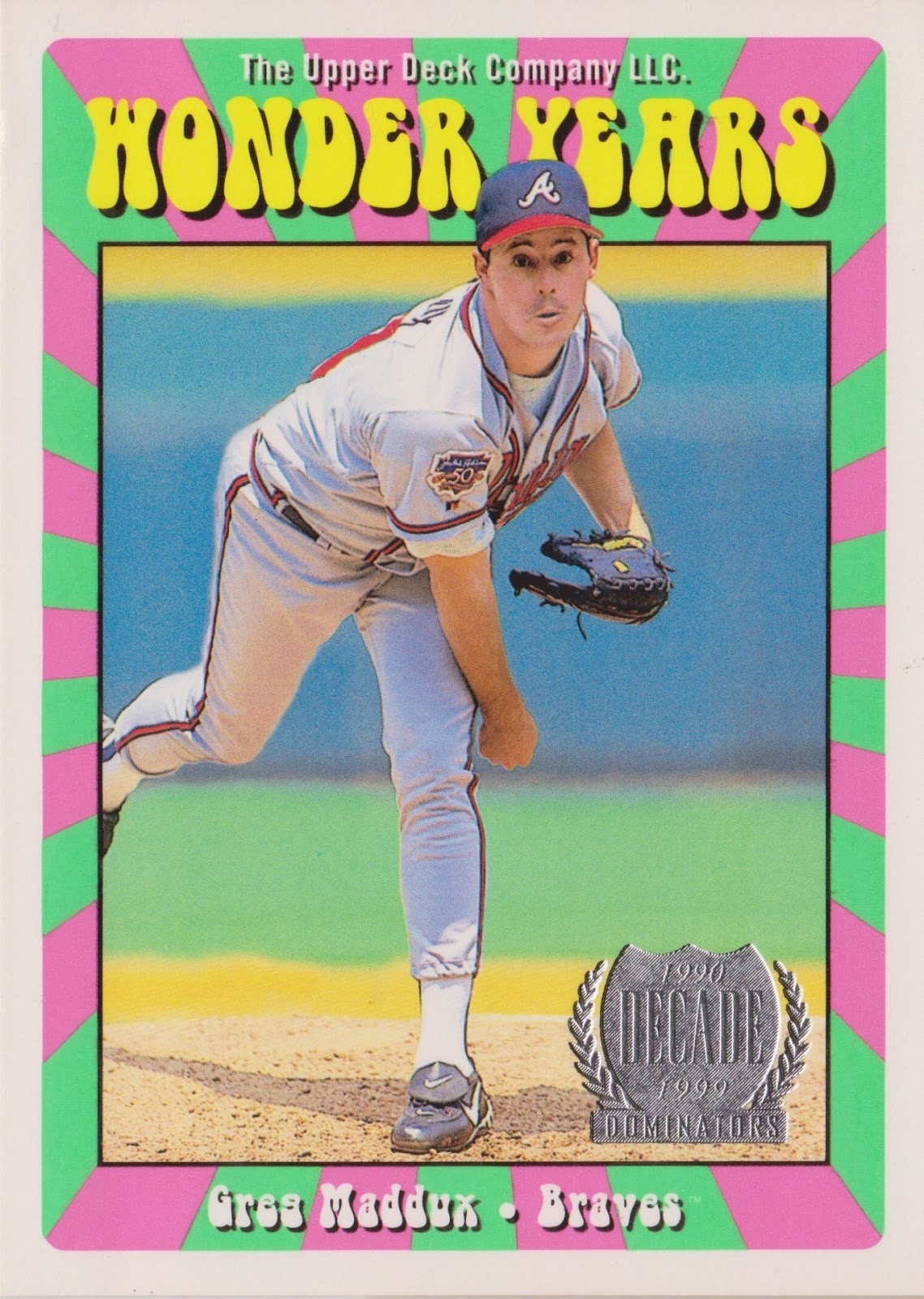 HOW GROOVY IS THIS CARD!  Talk about pop.  When I first spotted it, I wanted it.  Since this was a card lot, and not a single card, I was willing to spend more than usual, and that's how I won them.

I haven't even checked to see how many of these are doubles, but I'm sure at least two of them are.  I'm hoping to find some more cheap lots, and build it some more at some point.  However, I think my main focus should be on the Royals right now, so unless something I can't pass up comes along, I might hold off for a bit.

Speaking of the Royals, I did a bit more updating on my lists last night and hope to do some more today.  I have put it off for far too long, and I need to get in gear.  If I don't post for a couple days, it could be a case of finally pushing myself to do it.

Email ThisBlogThis!Share to TwitterShare to FacebookShare to Pinterest
Labels: Maddux