Time for another JustCommons package

If I have one complaint about Just Commons, its that it takes a while for them to process.  For me it usually takes a week before they finally ship.  I'm fine with it most of the time, but in this instance I was under a deadline.  As I mentioned yesterday, it was my friends birthday and one thing he was looking for was the complete set of the 2015 First Pitch cards.  He is like me, we don't like spending a lot for cards.  I found some complete sets for $10 and that was too much I thought.  Long story short, through some work I found all the cards for under half that.  The last 3 I needed were in this package.  As it turns out, I didn't scan them, but I did scan the rest of what I got.  Here are the first batch. 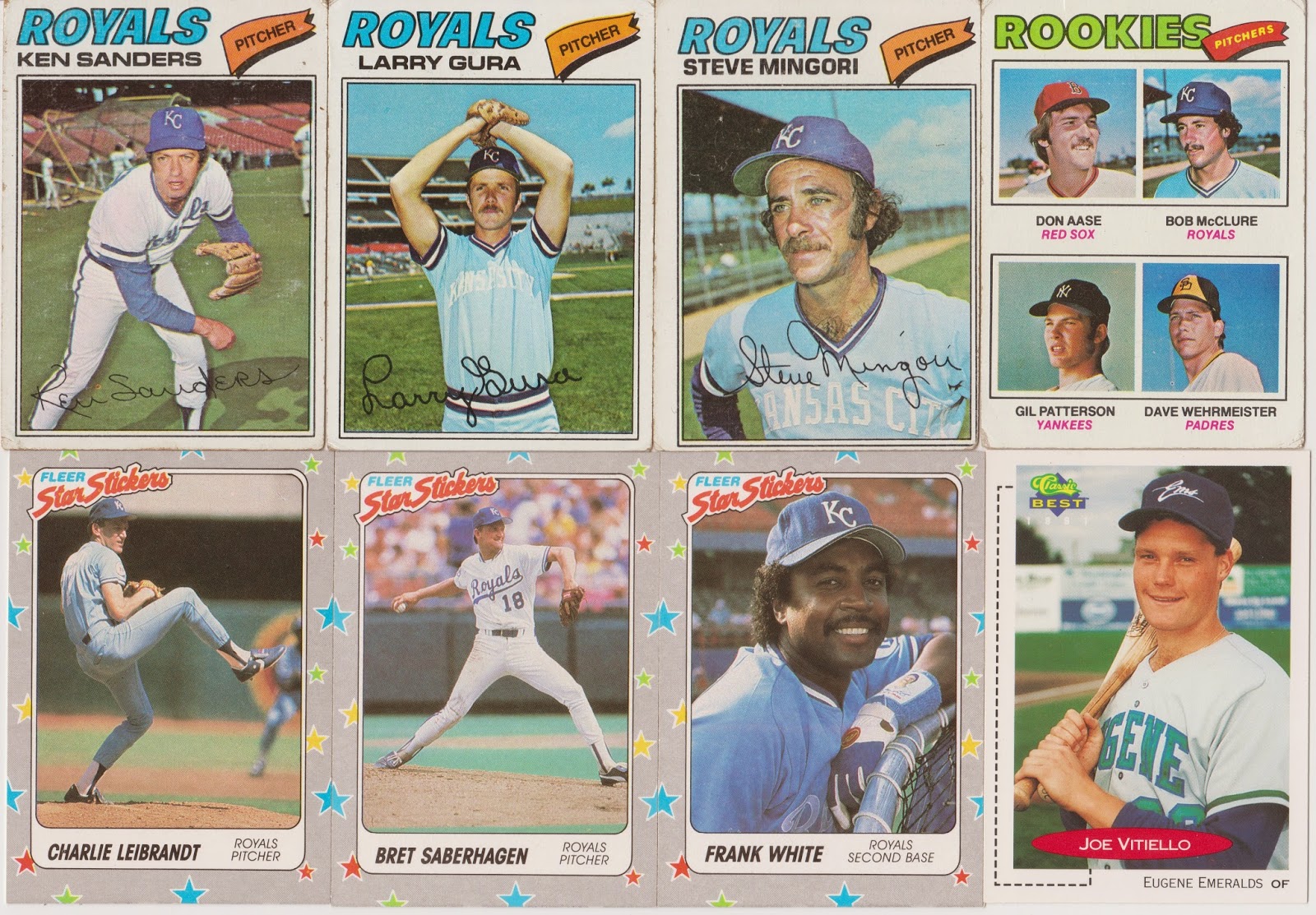 We start off with some old vintage cards.  The top row were listed as VG condition, which I'll be honest, as long as they aren't in terrible shape, I'll drop a dime on them.  They haven't completed the set, but it puts me one step closer.  I forgot to mention I got 101 cards for just over $11, with some 2015's (which I'll show later) being the only cards I spent over 10 cents on.  I figured a few here and there would help in the long run.

The bottom row are actually stickers.  Glad I found a Saberhagen and Frank White so cheap.  I already had one in the collection so it was the only reason it was even on my radar.  I think I like the Frank White one out of all of the cards in this scan.  Finally is a Classic Best of Joe Vitiello, which actually does complete that set.  I really liked these cards when I was a kid, and to be honest, I might even try to build the set at some point, but its nowhere near my radar at this time. 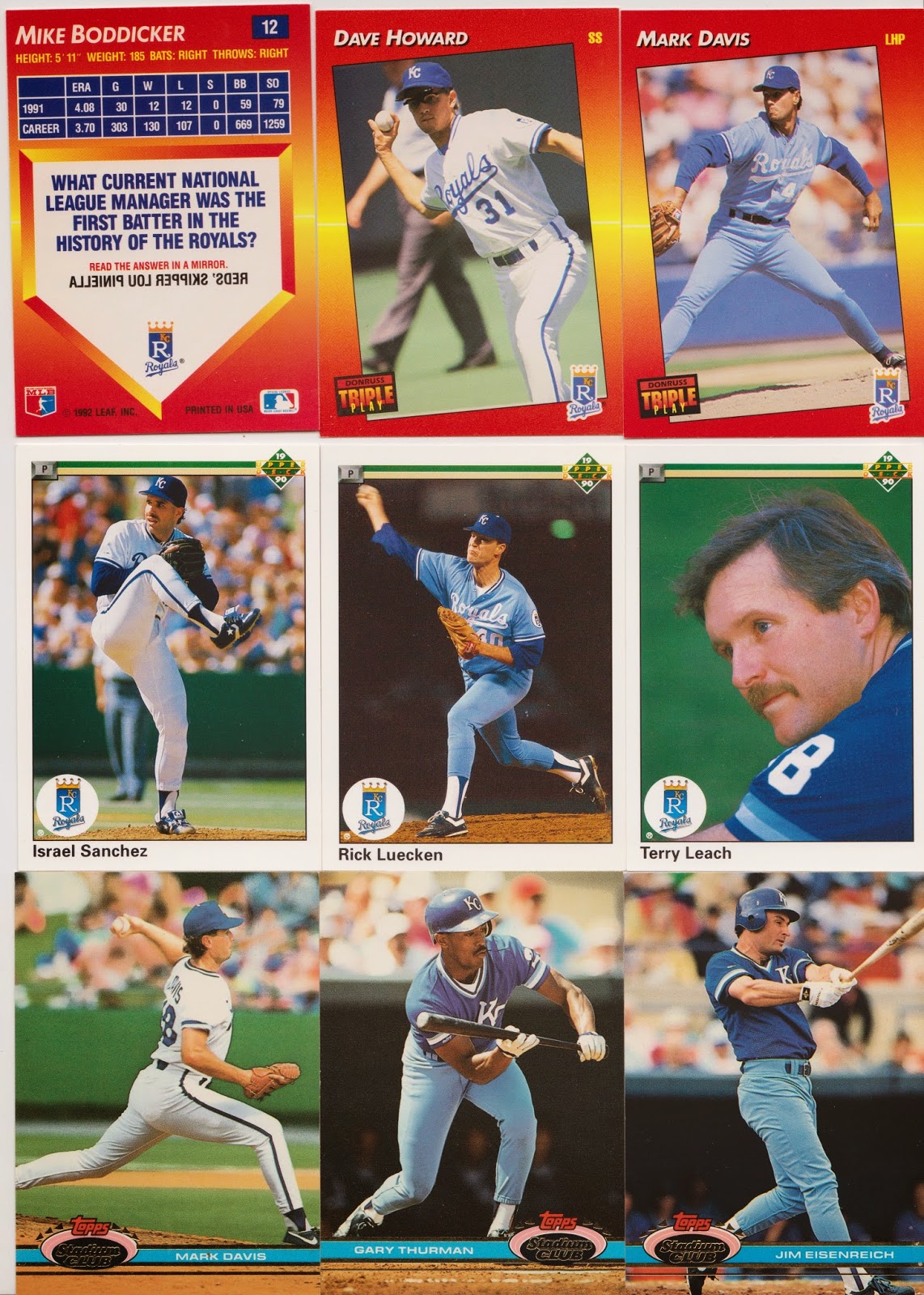 Another set I loved growing up was the Triple Play cards.  I wish this design would make a comeback instead of the cartoon ones they make today.  Minimal stats on the back, but I still like the design.  Second row is 1990 Upper Deck.  I never had many of these, and don't remember having any of them, so these are nice to add.  Under that is some Stadium Club.  Stadium Club are always nice cards, but none of these are anything to write home about.  Gary Thurman must be a hitting coach in KC these days since today's Royals like bunting so much. 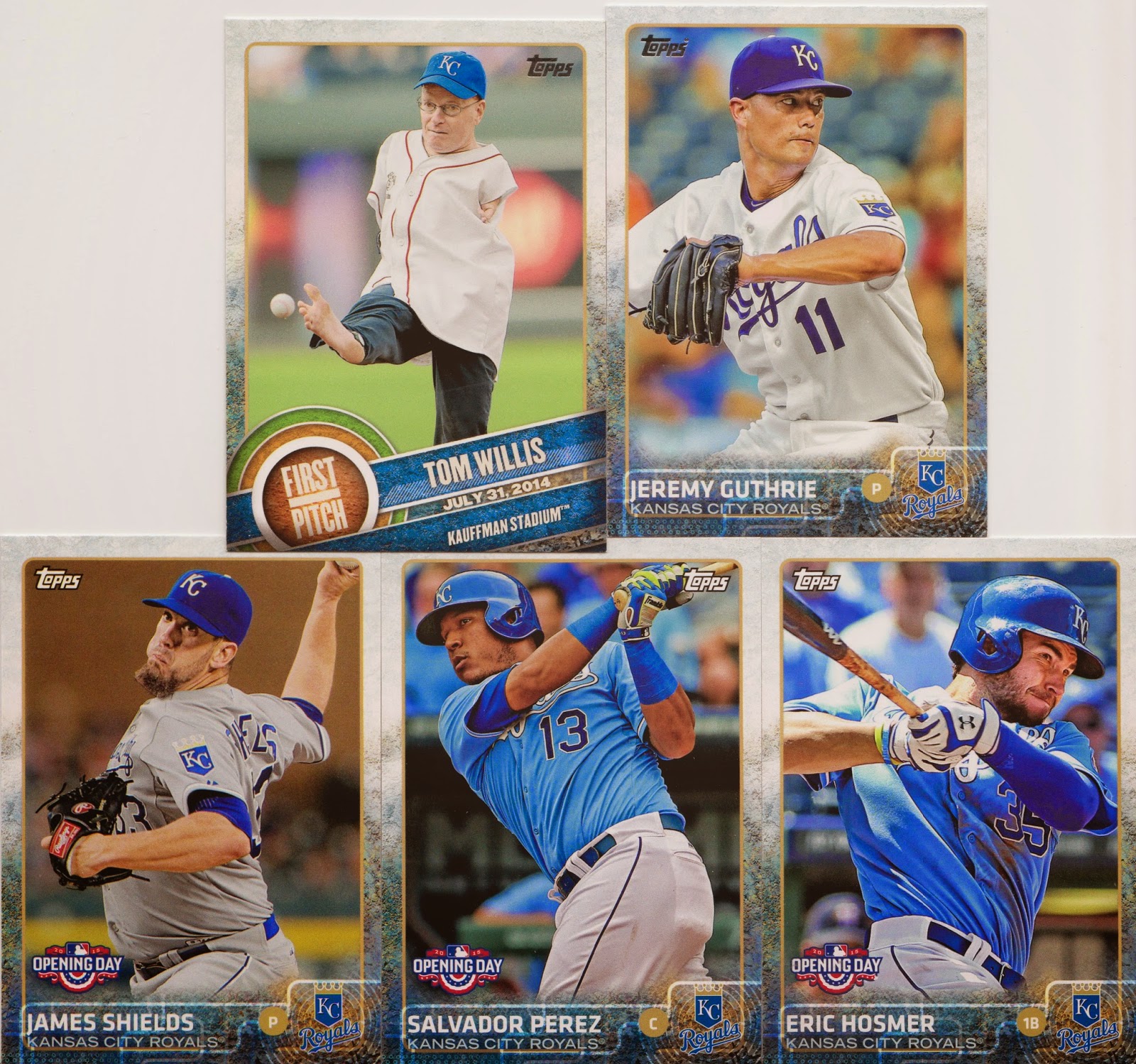 Here is the 2015 I got.  The Tom Willis was originally for my friend, but I got an extra one, so I have it now.  Willis is the only one I had interest in getting, though after today I now have like 5 of the cards in the set, so I might just finish it slowly.  The Guthrie card was cheap enough to get so I added that too.  I think I need a few more, but waiting for series two to come out to work on finishing the set.

With these three Opening Day cards, I have all the Royals base cards.  Now I might not work so hard on finishing the complete set, and as a matter of fact, have started on working on some deals for some of the cards. 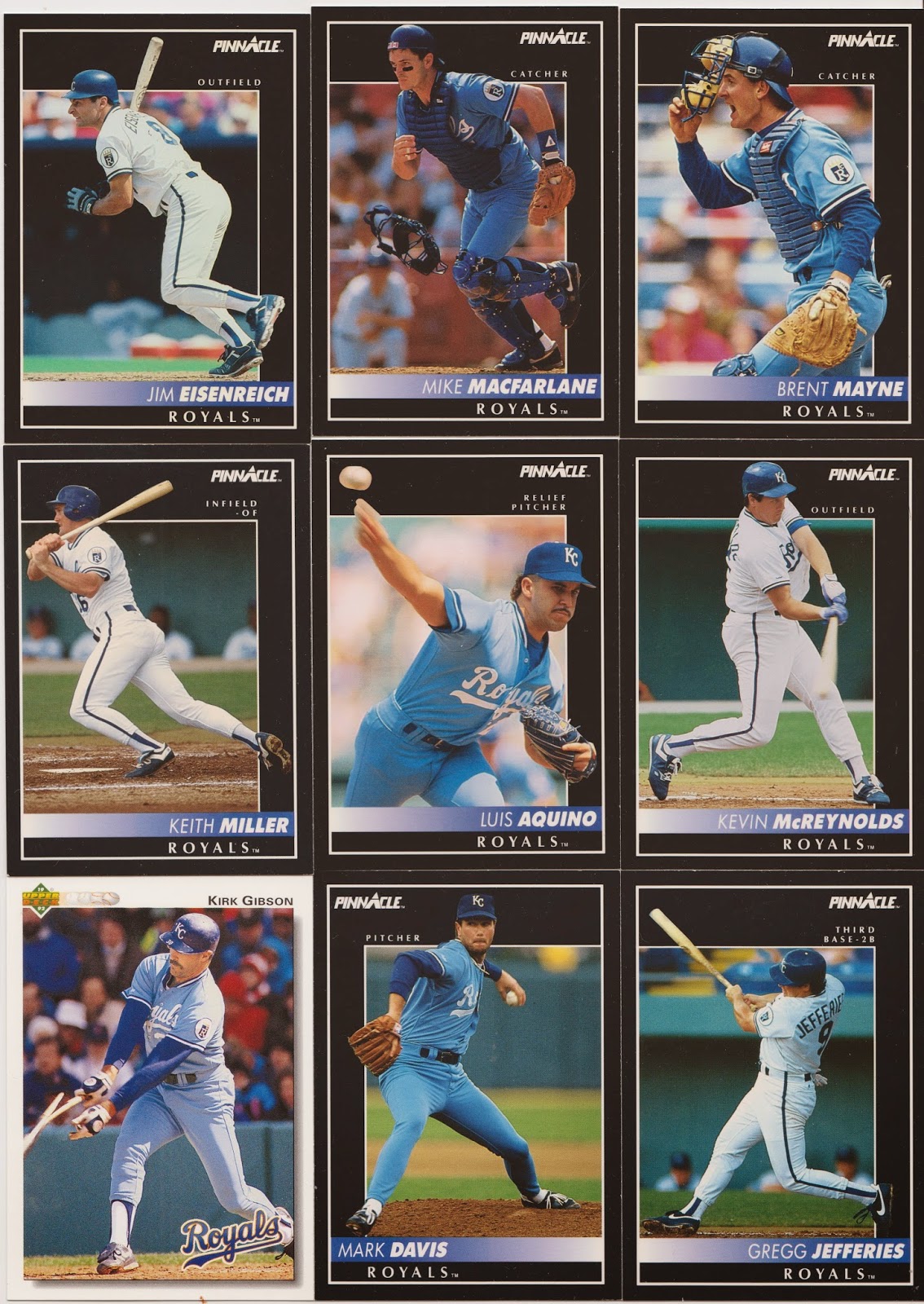 1992 Pinnacle... it just doesn't do anything for me.  I have a ton of these now, but still 4 cards short of the team set.  I do like how the older sets had a bunch of players, and not just 4 of the same guy.  Also in this scan is a Kirk Gibson.  I really thought I had it, but it said I didn't.  I am happy I'm cutting down on the "junk wax era" cards. 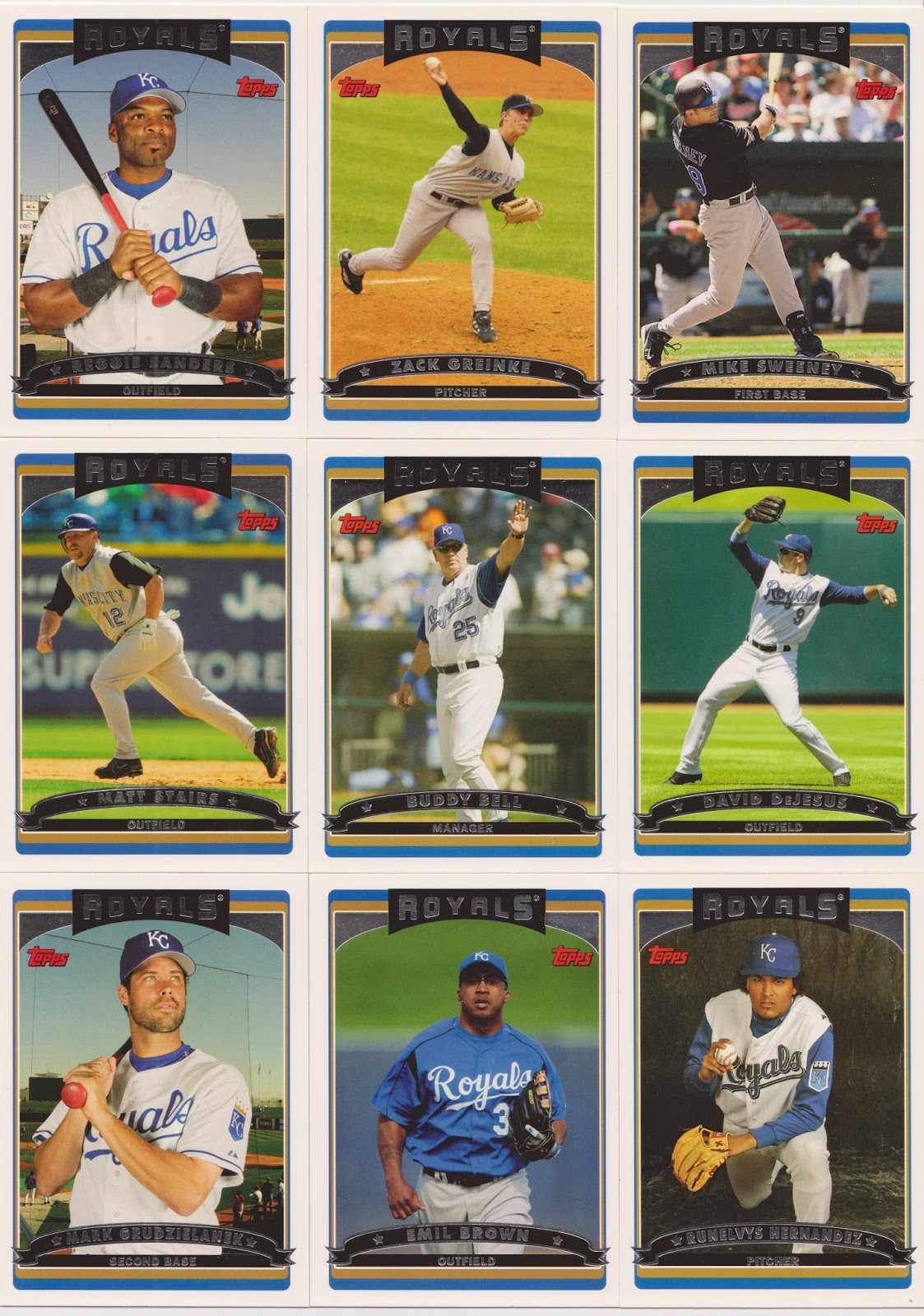 This put a huge dent into completing the set.  Now if I could find the Alex Gordon cards cheap enough. I doubt that happens, so Mark Grudzilanek will have to do for now.  This might be the first Buddy Bell I have too.  I can't complain though as I got Matt Stairs, David DeJesus, and Zack Greinke.  That is well worth 10 cents and in some cases 8 cents. 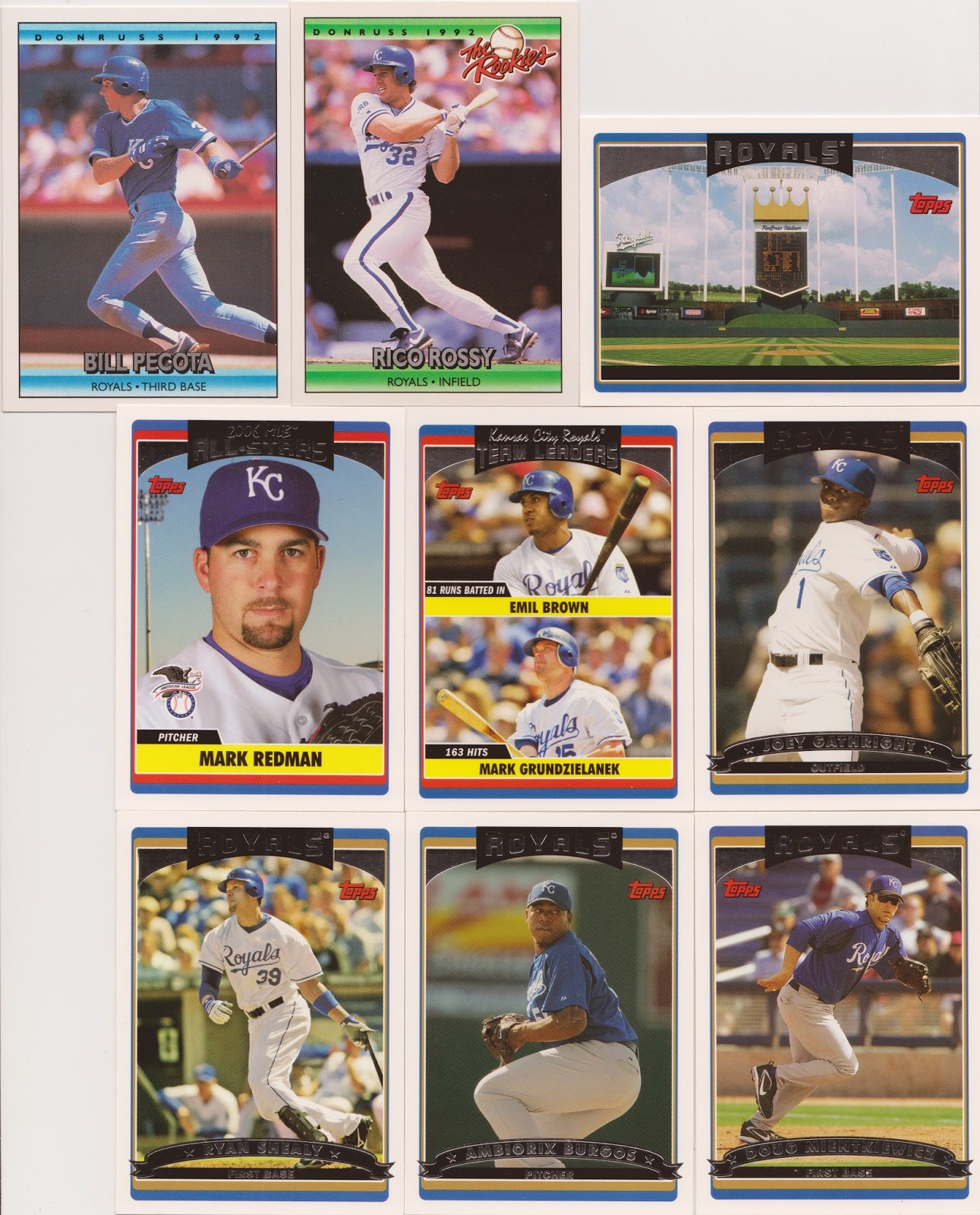 Most of these are from the update set.  Glad I got the Joey Gathright, I liked him a lot.  I really like the shot of Kauffman Stadium.  First because its a nice shot of the stadium, and second because it wasn't too long later that they spent millions upon millions to renovate the stadium.  I know new stadiums are cool and flashy, but I don't think new stadiums are needed all the time (ahem, Atlanta!).  In some cases it is necessary (The St. Louis Rams for one, and Oakland A's could maybe use one, or at the least major improvements), but I think for the most part, keeping the stadium upkeep from the beginning, then most of the issues work themselves out.

Anyways, in addition to Topps, is a couple Donruss cards (does anyone else get bothered seeing auctions for Don Russ cards?).  The 1992 Donruss Rookies card finishes that set, and the Bill Pecota card inches me closer to completing that one too.

That's enough for one night, I'll post the rest tomorrow, it makes for more commentary and not so long of a post.  Thanks for reading and have a great night.