Another Round for Boxing Day thanks to COMC

I just started the process to ship my computer off, so in a few days I'll have to use the laptop.  In the meantime, I'll have to clean off my laptop, so I'm pulling double duty today.

I missed Black Friday sales on COMC, so I was happy when they announced a special for Boxing Day.  I should have looked for a Tommy Morrison card, but I didn't.  Instead, I bought about 5 cards to go with the 45 cards I already had ready to ship.  If you had over 30 cards you get free shipping.  Their normal $3 shipping is a good deal, but that $3 allowed me to buy the 5 cards. 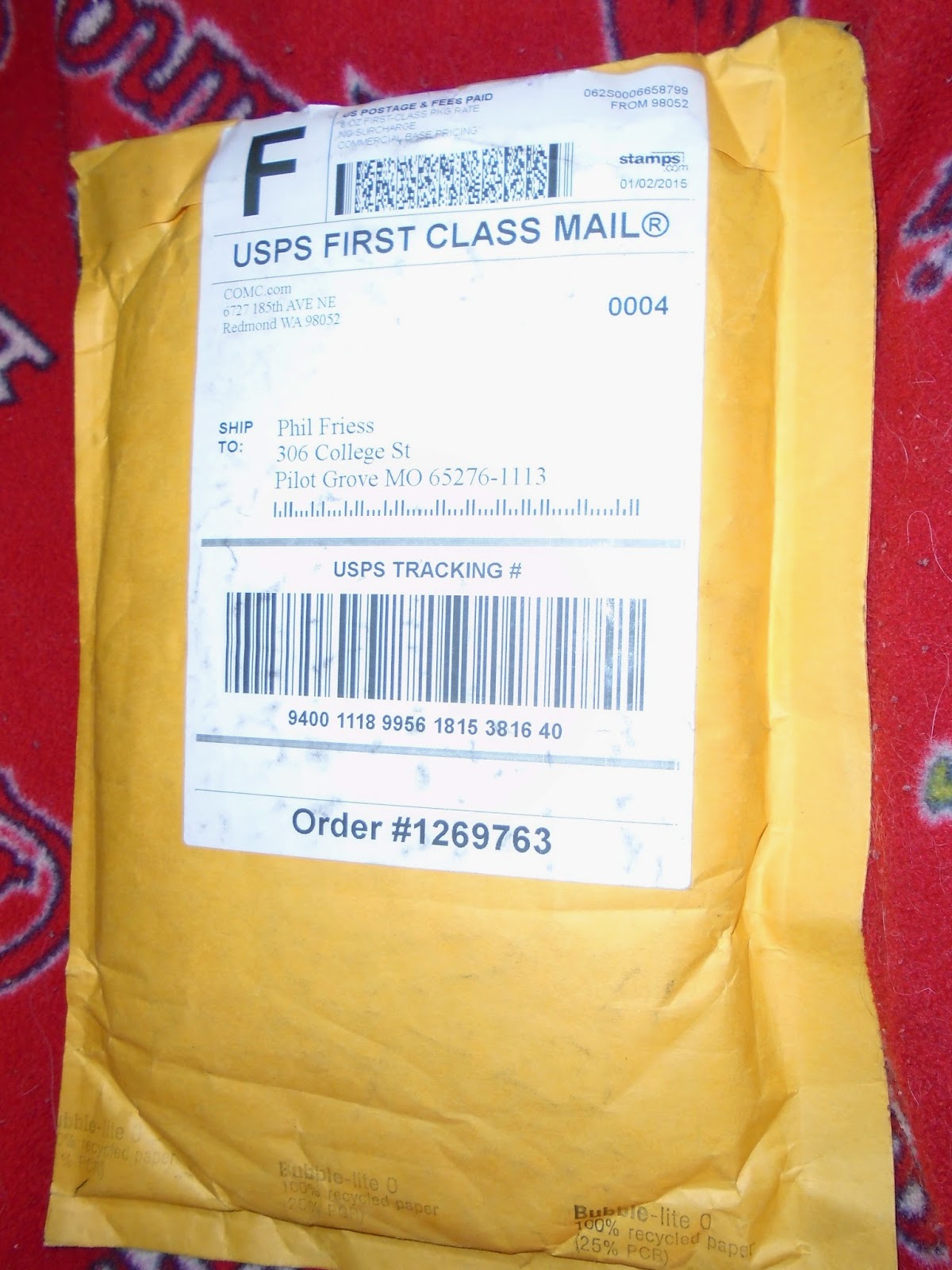 They arrived a few days ago, and since I don't have the scanner hooked up, I took pictures.  At some point in the future I will likely show some of these cards off in various collections, but for now let's take a look. 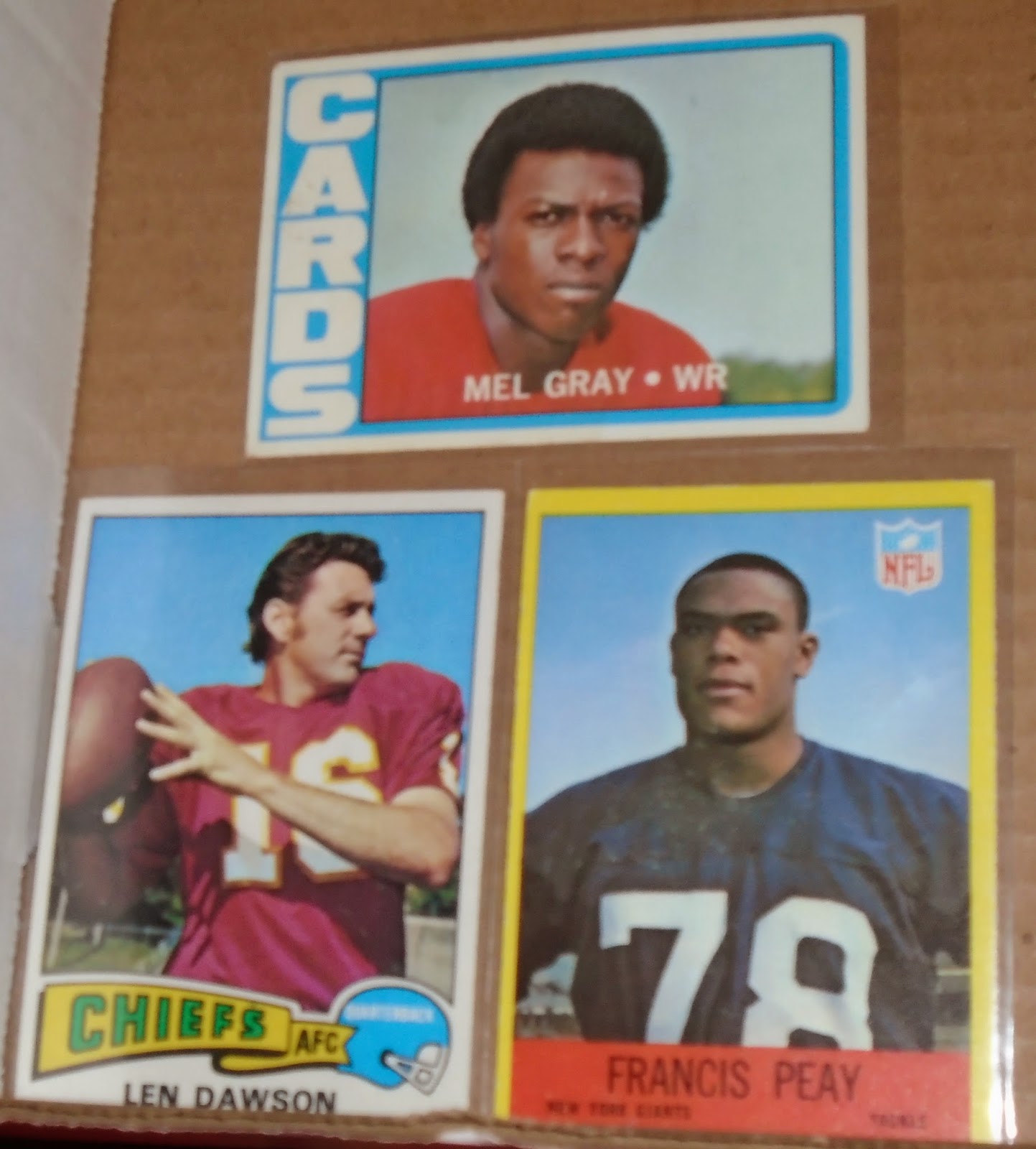 Old man football cards.  Mel Gray and Francis Peay went to Mizzou, so when I found these cheap I jumped on them.  The Peay card is a 1967 Philadelphia card and is now I believe my oldest football card.  It's my first of his and its his rookie card.  The Gray card isn't my first of his, but its now my oldest of his.  I forgot if its a rookie card or not, but as I said it was cheap.  The Len Dawson card will fit in nicely with my Chiefs collection.  In terms of Kansas City legends, Len Dawson and George Brett are the top two.  I would like to build my Chiefs collection up at some point, but not to the level of the Royals. 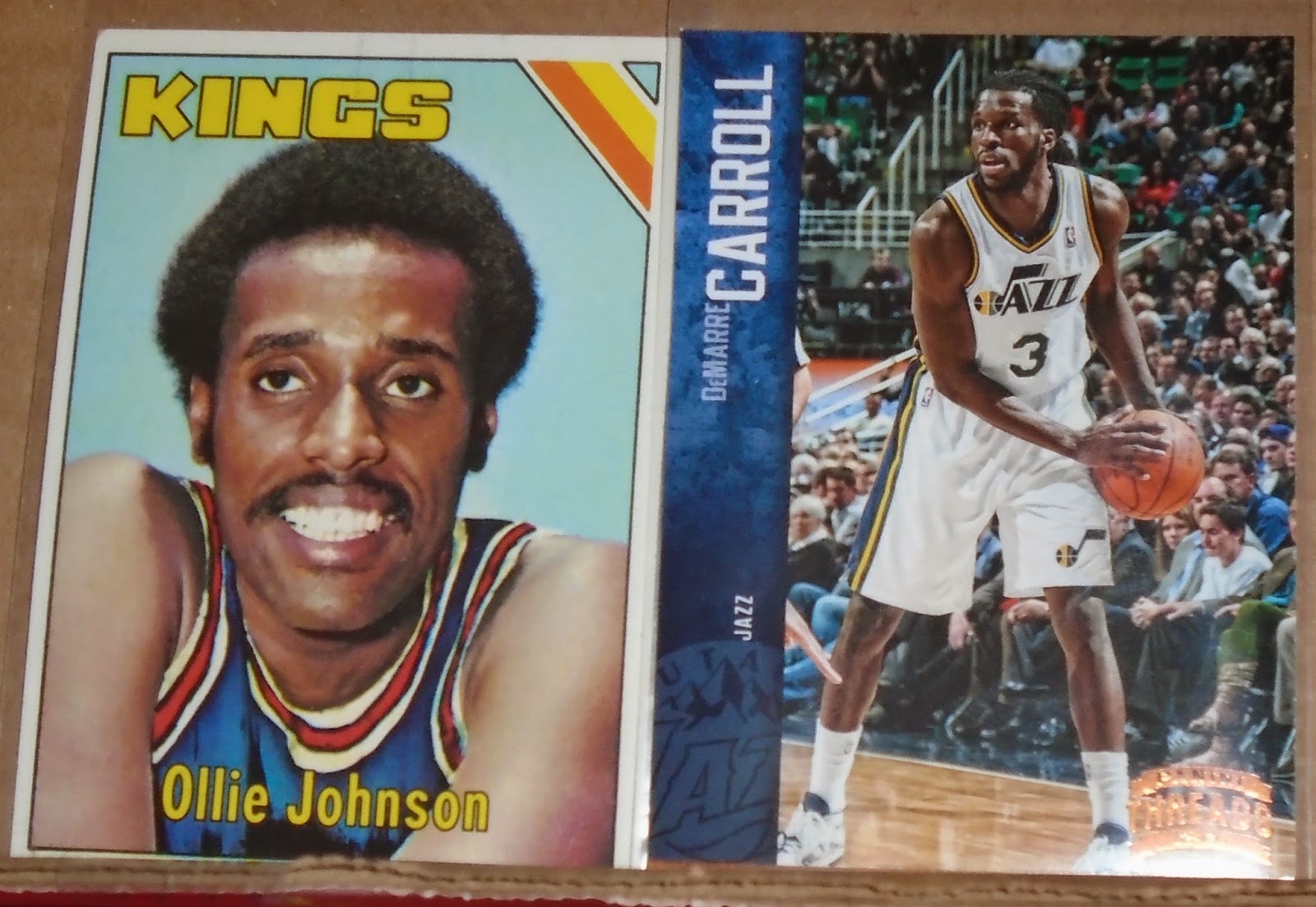 I'll start with the DeMarre Carroll card.  As I said in a post earlier today, the Junkyard Dog is overlooked by a lot of people.  The former Mizzou star, now plays for the Atlanta Hawks, and they are on a tear.

As I told my friend the other day, I got the Ollie Johnson card for a couple reasons, first, because this is a Kansas City Kings card, and I might try to get at least one card of every pro team to play in Missouri at some point.  The other reason- HIS NAME IS OLLIE!  How could I pass it up.

I'm finished the Hologrphx team set with Jeremy Giambi card, and added the Maddux card to add to the Maddux PC.  I've been building up my stock on the Hunter Dozier cards, I bought this a few months back.  The ones on the left are ones that were cheap so I got them.  The Kyle Gibson will be added to my Mizzou collection.

After adding the cards on my right, I will likely be done working on the Bowman is Back inserts from 2014.  The Royals team set is complete, and the Maddux helps me out with his collection. The Oscar Taveras card I got in August, a couple months before he passed away.  I started the year last year saying I expected his cards to skyrocket in the next few years.  I didn't think he would be taken so soon.

The Bret Saberhagen is a 1985 rookie and adds another piece to the puzzle to complete the '85 team set.  It was one I was looking at for a while, and in August it was cheap enough for me to snatch up.

The Dan Quisenberry is also one I had my eye on.  I like the oddball cards, and with this being a Purina card it fits the mold.  I've read the story a couple times, but before the St. Louis Blues moved into their new arena (whatever they call it now, I think its still Scottrade Center, it changes names every few years), the Blues were owned by Ralston-Purina for a few years (around the time this Quis card was released).  They also owned the old arena they played in, and the called it the Checkerdome, based on their logo.  While it has nothing to do with this card, I like to sprinkle in some history into posts sometimes. I discussed with my friend the other day an idea of doing a History of Missouri Sports blogs.  I might do one of those soon.

Sorry if the design is lopsided or crappy, I hate moving pictures around. 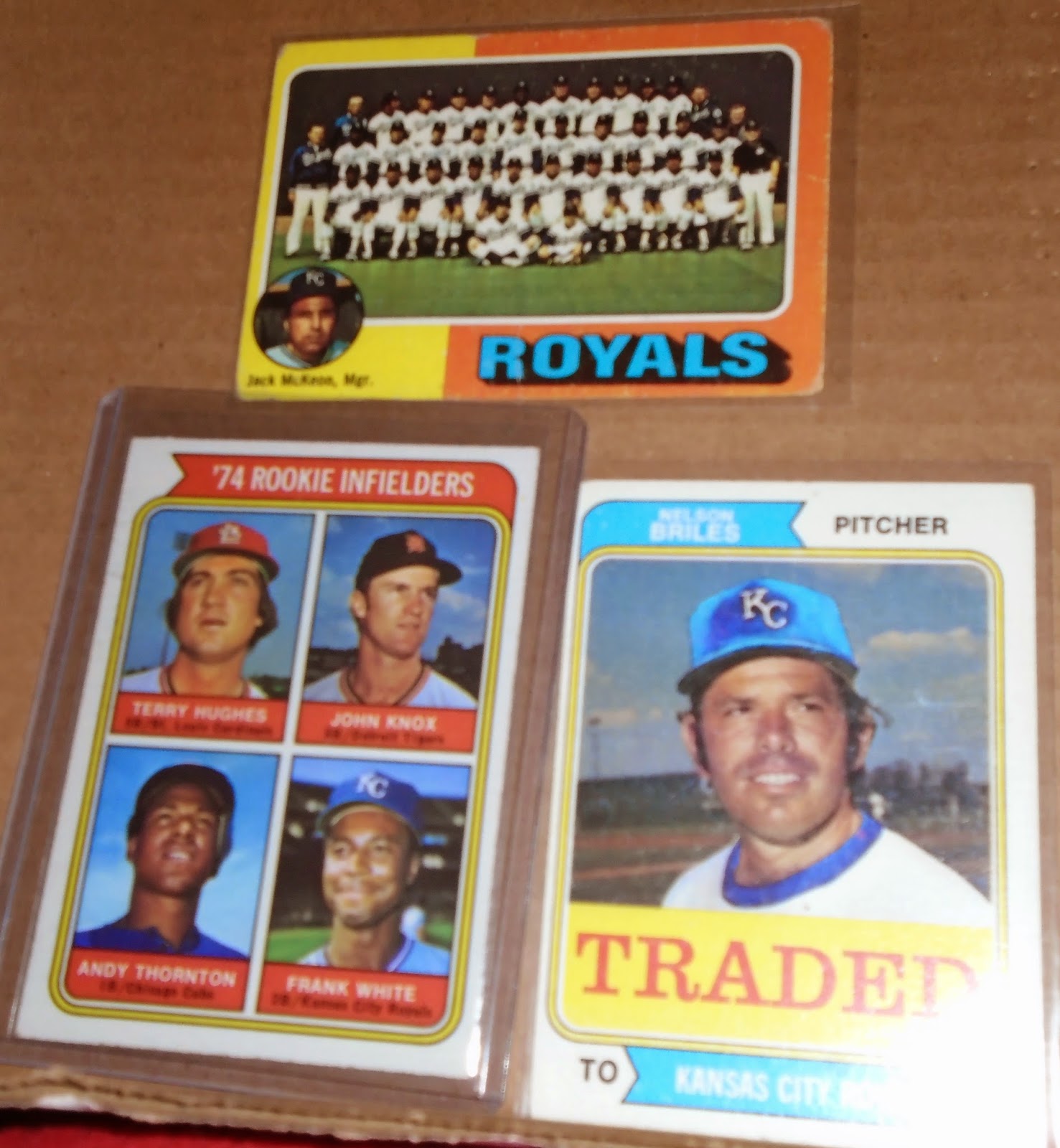 The Nelson Briles card complete the short team set for the 1974 Topps Traded set.  I'm not a fan of the older traded sets, so I'm glad I'm done with it so I don't have to worry about it.

Next to it is a card I bought about the time I started my blog.  It is a 1974 Topps rookie of Frank White.  I paid 48 cents for the card, and immediately thought of flipping it.  I tried for a few days, but decided to keep it.  I'm glad I did now.  Not only will it help complete the set one day, but it is a nice card to have.

I'll take a break and show off some football cards next.  I've stated before how much I like Kony Ealy, so two more cards are nice to have.  I actually got the first Ealy card before this one arrived, but I bought this a few months back.  The other Ealy I really like.  Next to the Ealy cards is another former Mizzou star- Michael Sam.  Maybe he deserves cards, maybe he doesn't, but either way, they are available and now I have a couple of his.

I better stop for now.  I still have more to show off and it makes sense to break it up, so part two will be up tomorrow.  Thanks for reading and have a great night.