Since Christmas, I have been sorting my Royals cards.  I have moved them out of the binder and into a 3200 count box and have been (slowly) putting them into databases and spreadsheets to figure out what I need.  Since then, I have completed an additional 19 Royals team sets, thanks to my best friend Jason, who has a blog over at Talkin' Truman (I can't wait to see his future posts).

Since I have quite a few team sets completed, I figured it was time to showcase them in a series I will call Tabulated (or more precisely- Team Set Tabulated).  Some of the sets and cards have been featured before, but this will be showing all the cards in the set and anything additional I may add.

Today I will show off the two oldest team sets I have completed, which aren't that big.

I'll start with the 1974 Topps traded set.  Since I wasn't born until 1982, I never had these cards, but I can't say I like them too much.  Airbrushing happens still today, but these cards really made today's attempts seem less... criminal I guess I could say.  I am happy with the advances of airbrushing and the advances of the Traded or Update sets Topps releases today.  Back in 1974, a big TRADED was about all they did.

The first two cards were part of my dad's collection.  Though my sister who sometimes reads this may disagree, Fernando Gonzalez kind of looked like my Uncle Jim in this photo.  Not if you stare too long, but really quickly.  The Nelson Briles card is the one I needed to complete the team set, and I bought it off COMC in late December.

The numbering of the traded sets back then also sucked.  All they did was use the same card number as the player had in the original set (at least I think they did), so unless you had an official checklist, it would be tough to find out if you had a complete set.  I do like how they made the design of the back look like a newspaper.  I would like to see this design in modern sets.  Maybe even make the cards look like webpages.  That would be a nice insert set in my opinion, especially for traded players and such.  Even create a website with full stories on the player.  Make a code allowing you to unlock the story.  That could possibly create some new interest in younger fans. 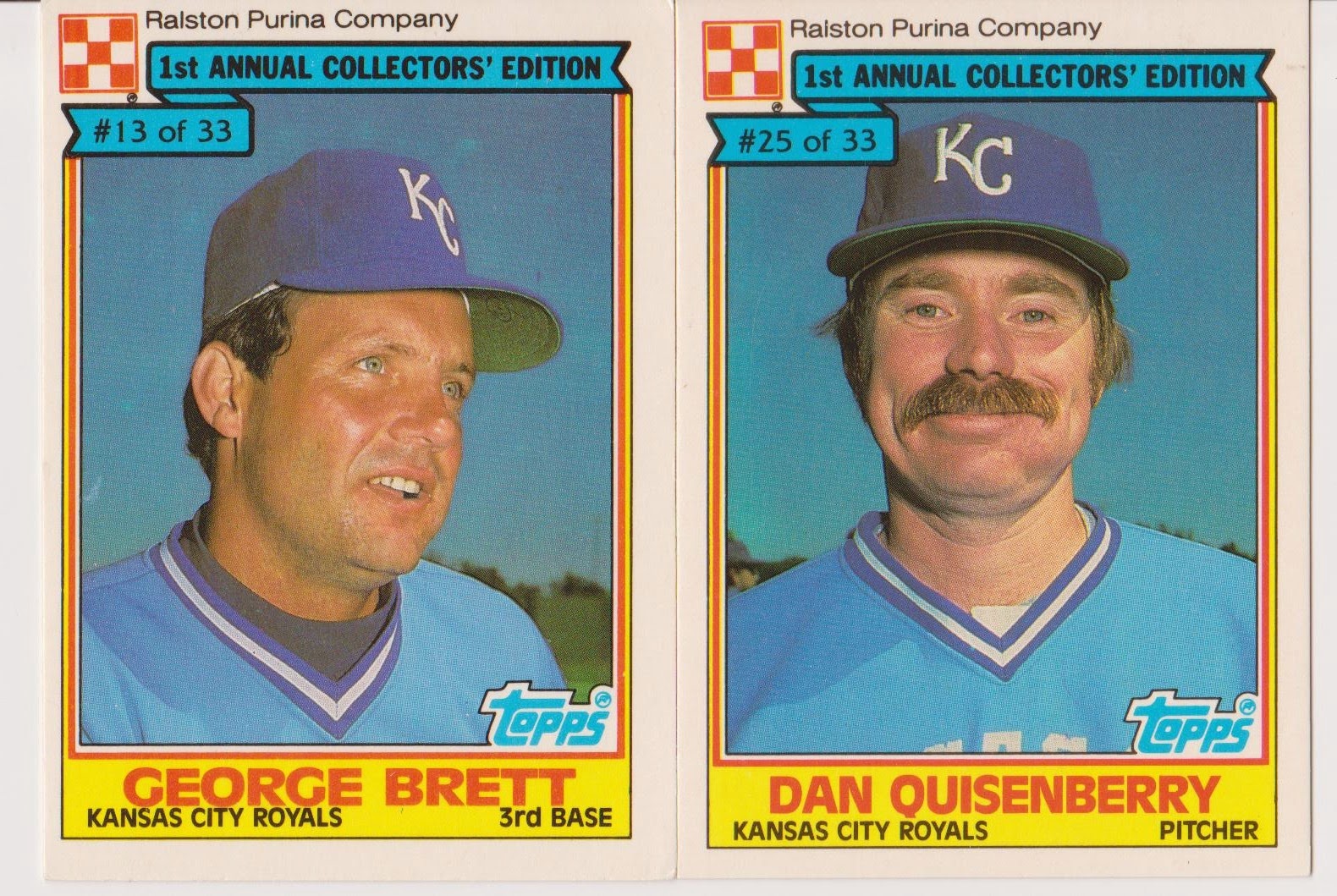 I completed this 2 card set from COMC alone.  I bought the George Brett card in November 2013, and the Quisenberry card last month as part of their Boxing Day promotion.  As a fan of oddball sets, I'm happy I completed this one.  I may even take it a step further and work on the entire set in the future.  As I've stated many times on here, I miss the days of cards being part of promotional sales for various products.  I may be more selective as an adult to what products I buy, but I would give a product a second look if free cards were included.

I like the design of these cards.  They aren't too plain, and while the poses are a bit odd, I don't see any airbrushing on them. 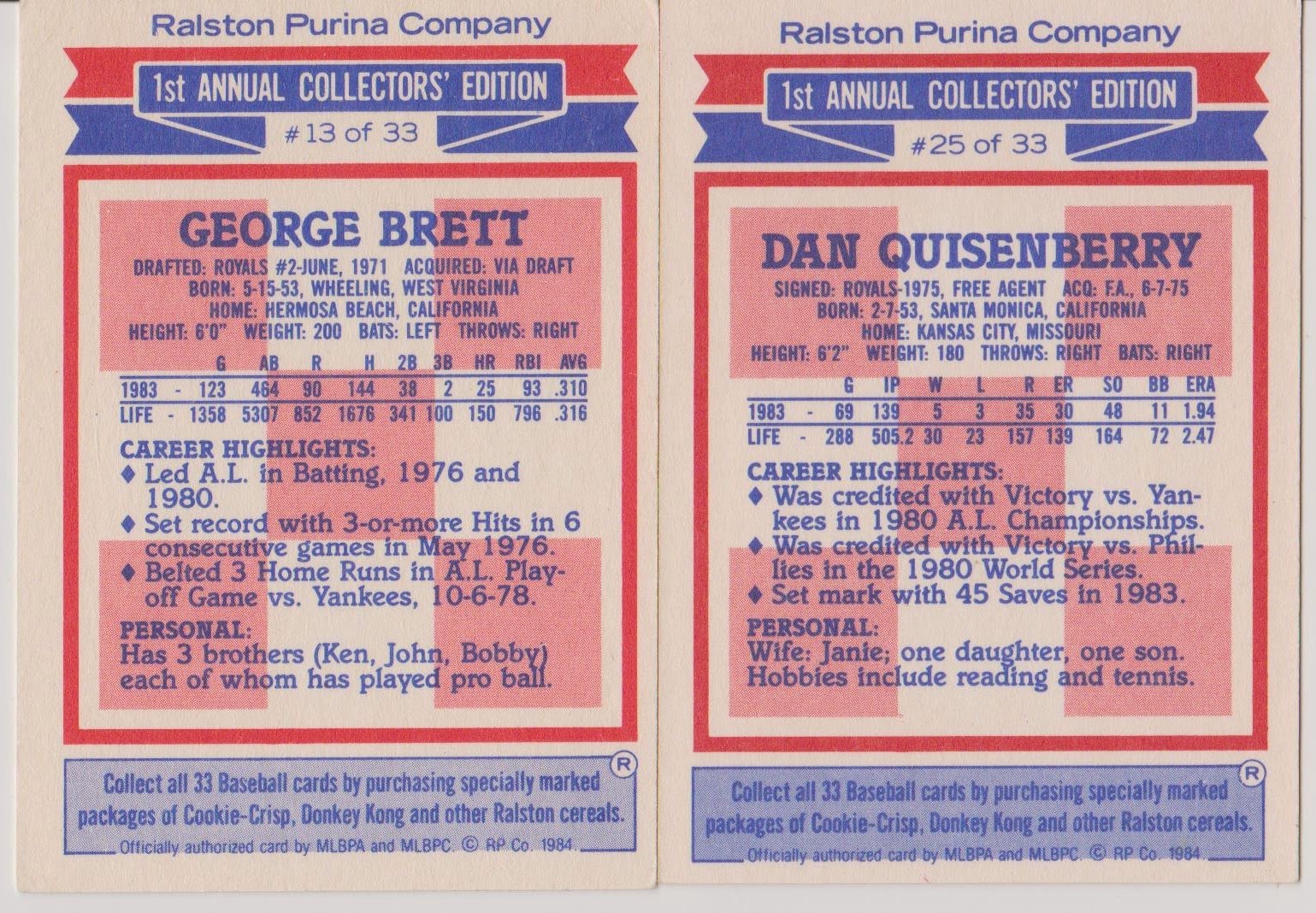 While at first glance it may seem a bit distracting, I like the checkerboard background of the card.  It has all the main details and has a bit about them too.  While I like complete stats, oddball sets I think can get away with just the previous year stats and lifetime stats.  If made today, there would too many stats to include that wouldn't be needed.  Do we really need WAR's and all the other sabermetrics included on the cards today?  Again, this would be a good time to add codes to the card to unlock additional stats and such online.  Better yet, do like I do, just go to Baseball Reference for more stats.


So that's all for today, as I finish completing more sets and organizing the rest of my cards, I will showcase more team sets.  Smaller sets like these I will likely do a couple at a time, larger sets will be one at a time.  You can see my want lists and completed sets on my Google Buzz lists on the links at the top.  I work on them from time to time, and once I finish sorting all the cards, I will rehaul the want list a little better.  Thanks for reading and have a great day!