After I posted my page last night I did something I haven't done in a while.  I posted a link on my facebook and twitter pages.  Now according to the stats, the twitter link didn't help me at all.  A couple people found me through facebook, but I looked at the stats, and yesterday/today has had my highest viewership since a Royals blog linked to my page (I sent them a link) after my blog on comparing the movie Major League to the Royals.  The majority of my pageviews came from links off other bloggers pages.  For that I thank them very much.  I don't plan on making goals for 2015, but one thing I want to accomplish is to enjoy more blogs this year.  I spent some time last night reading a few new ones, and I plan to link them up soon.  I wish that whenever you follow a blog, it would show up on your blog.  Not just on your reading page on your dashboard, but the blog itself.  Maybe it does somehow but I haven't figured it out.  Another reason I think I had a good viewing last night was because for the first time in a while, I had a worthwhile topic.  I was very happy with what I wrote last night, sometimes I set high goals but was pleased with how it turned out.

Anyways, I can only gloat for so long.  One thing I talked about yesterday was that a friend of mine was starting a blog.  Shortly after I posted, he informed me that he wrote his first blog.  You can find and follow his blog here.  It's called Talkin' Truman, and his first post was a good one. He told me he's still messing around with it, so like I did when I started, he might change the look of it some.  I haven't read today's but I expect it to be good.  His blog will consist of his Missouri Tigers memorabilia and such.  He has a pretty nice Mizzou collection, and along they way he'll mention other random stuff.  Besides having an impressive Mizzou collection, he is an audiophile and told me he may also start a blog on his vinyl collection (which is something in itself).  I wish him the best of luck, and hope you guys check out his page and add it to your blogroll. 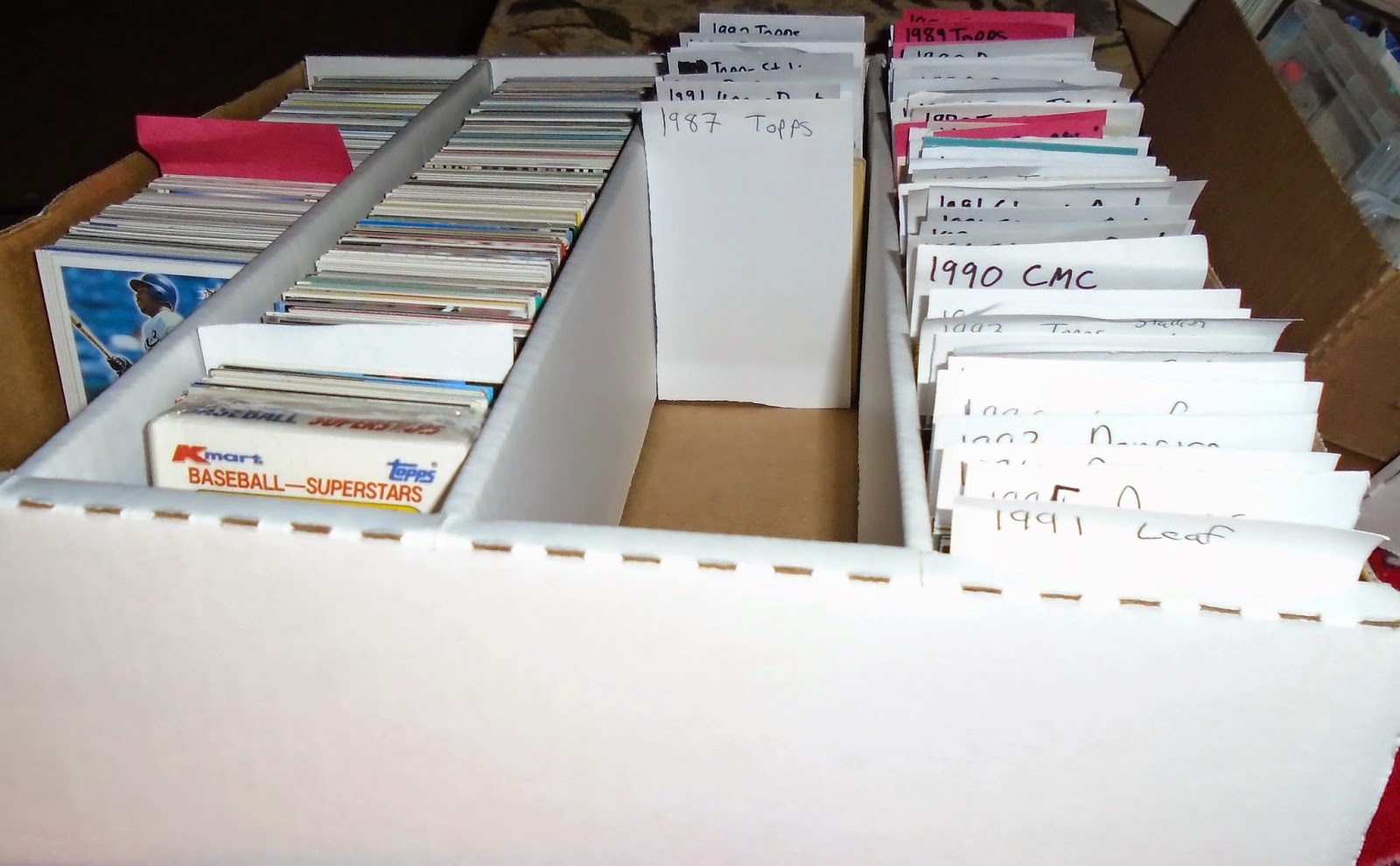 This is what the box looks like today.  I took all my cards out of my binder and added it to the ones I got.  I also removed most of the doubles (triples, quadruples, and multiples after that).  The cards on the right with the separators are ones I have updated, catalogged, and such.  Some are ones I had complete sets of (the 1990 CMC for example), and some were easy ones to do. I used a sharpie and some red pages on the separators I used.  The others are the ones my friend made.

The cards on the left are ones I still need to go through. I managed to separate the cards by decade to make it a little easier. 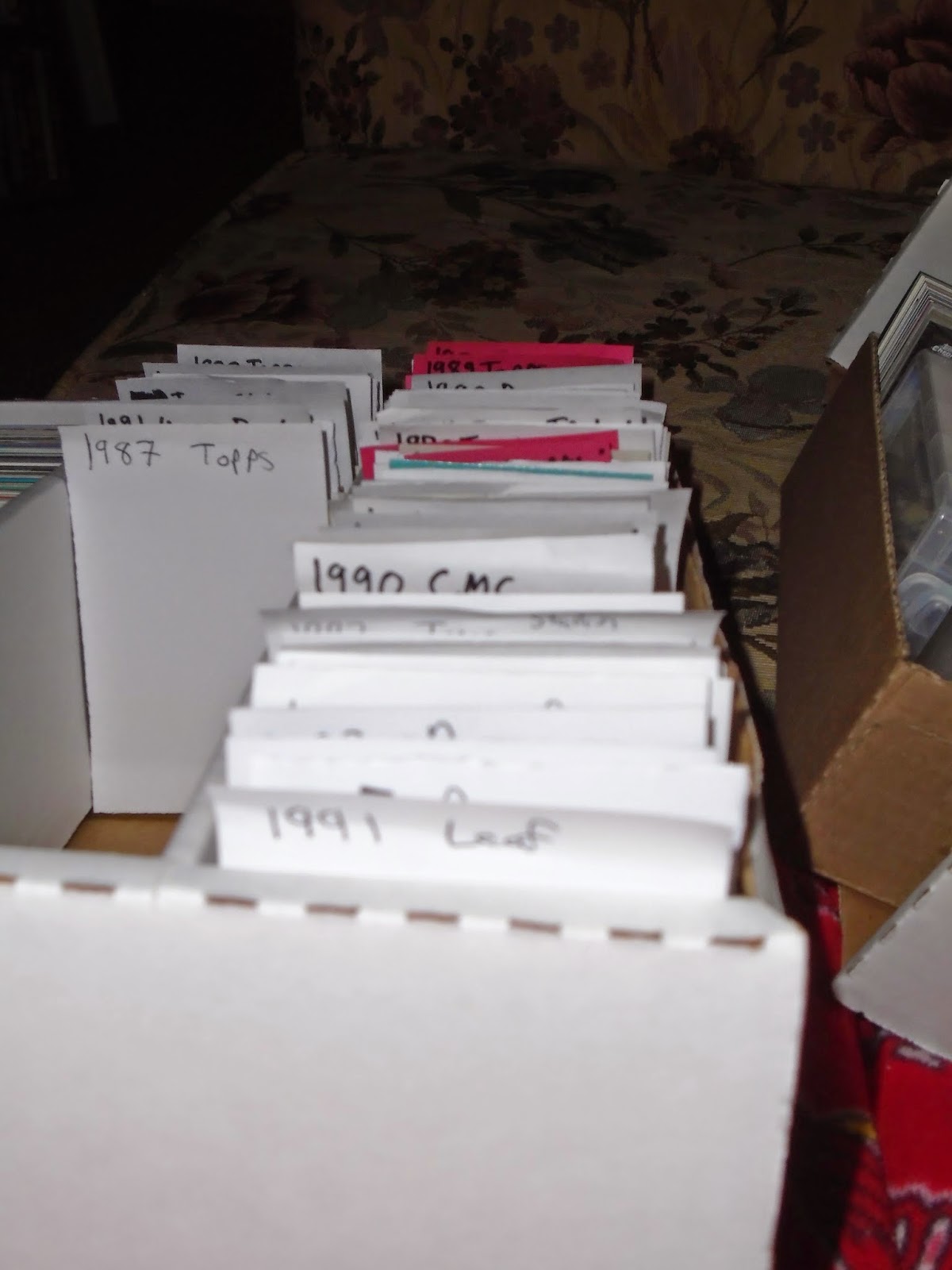 Not a bad start I don't think.  The hardest part is catalogging them.  I enjoy doing it but I have to take frequent breaks or else I go crazy. 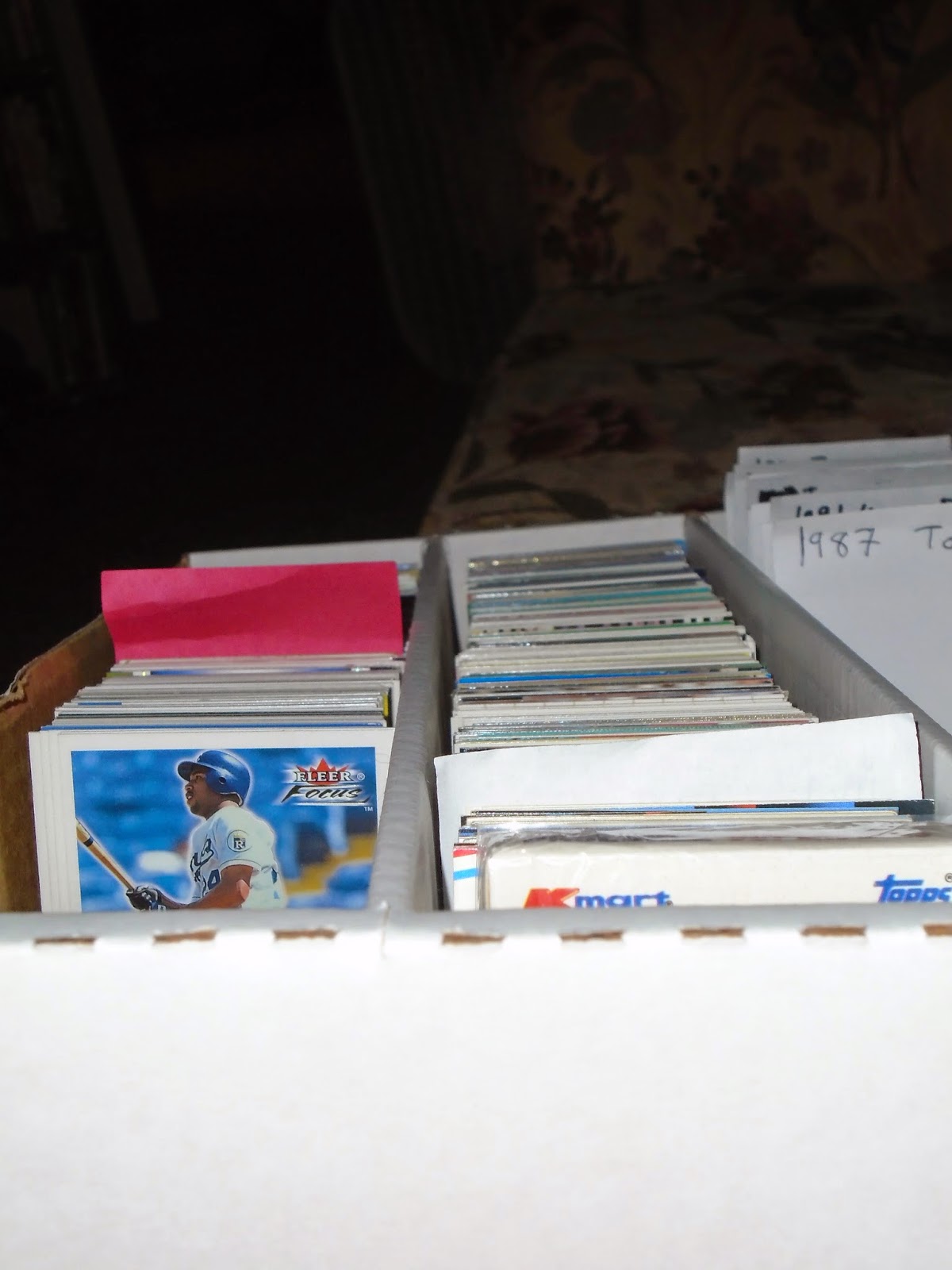 I got a whole lot of crazy left.  Luckily, I am almost done with the 1970's and 1980's.  I will probably do the 1990's last because they have the most.  I am updating my have and need lists as I do it.  I am happy I finally found a use for Google Docs, as it works really well.  It does remind me that I need to update my Johnny Damon collection and Greg Maddux one too each time I open it. How many extras did I get?  This should tell you.  If you need some junk wax era Royals, let me know, I might have some. I was thinking of what to do with them, and today I got an idea.  Many people have TTM success, so I might try a few.  I have nothing to lose other than postage.  If I don't get the cards back, no big loss.

The holder I am using may look familiar.  It is the box I showed off (at least I think I did) a few months ago that I picked up at Savvy Seconds.  The lid doesn't lock (it does, but I have no key), and I couldn't find a use for it.  I finally found one, at least temporarily.  At least the box fits nicely inside the lid, so it stores easy.  All these cards, LOOK OUT THAD BOSLEY!  I have some cards to get signed. 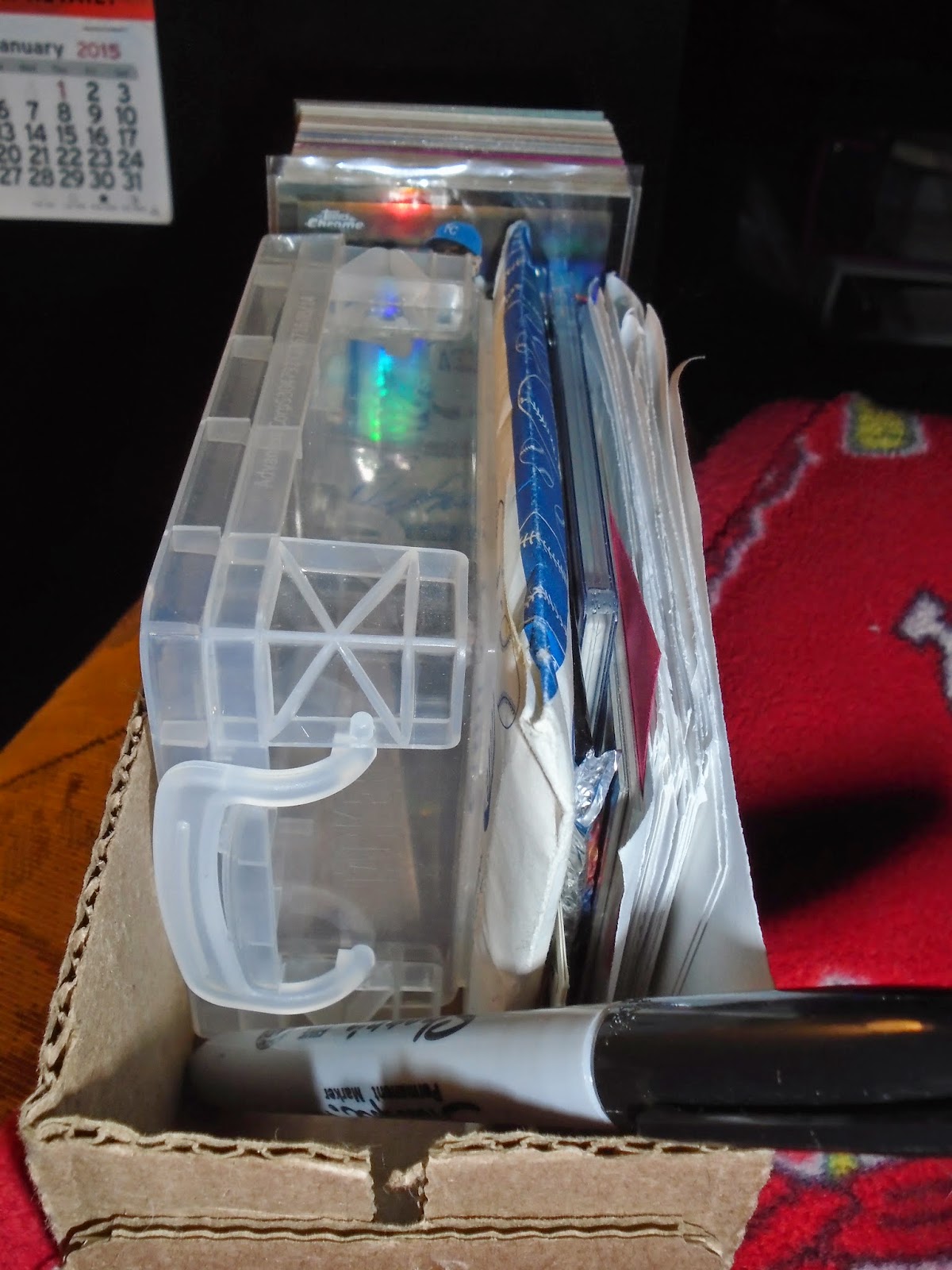 This is a random box I use to store stuff.  It fits inside the big box for now, preventing the cards from falling.  the plastic box is used for the same reason.  The white sheets are the ones my friend made and I am using whenever I finish a set.  The sharpie is for when I need to make new separators.  The cards are ones for players not in Royals uniforms (mostly Johnny Damon ones), or ones in protectors.  I also have a couple other things in there too.  Once I fill the big box up, I won't t really need most of them.

That will wrap it up today, thank you for reading, and I hope everyone has a great day.